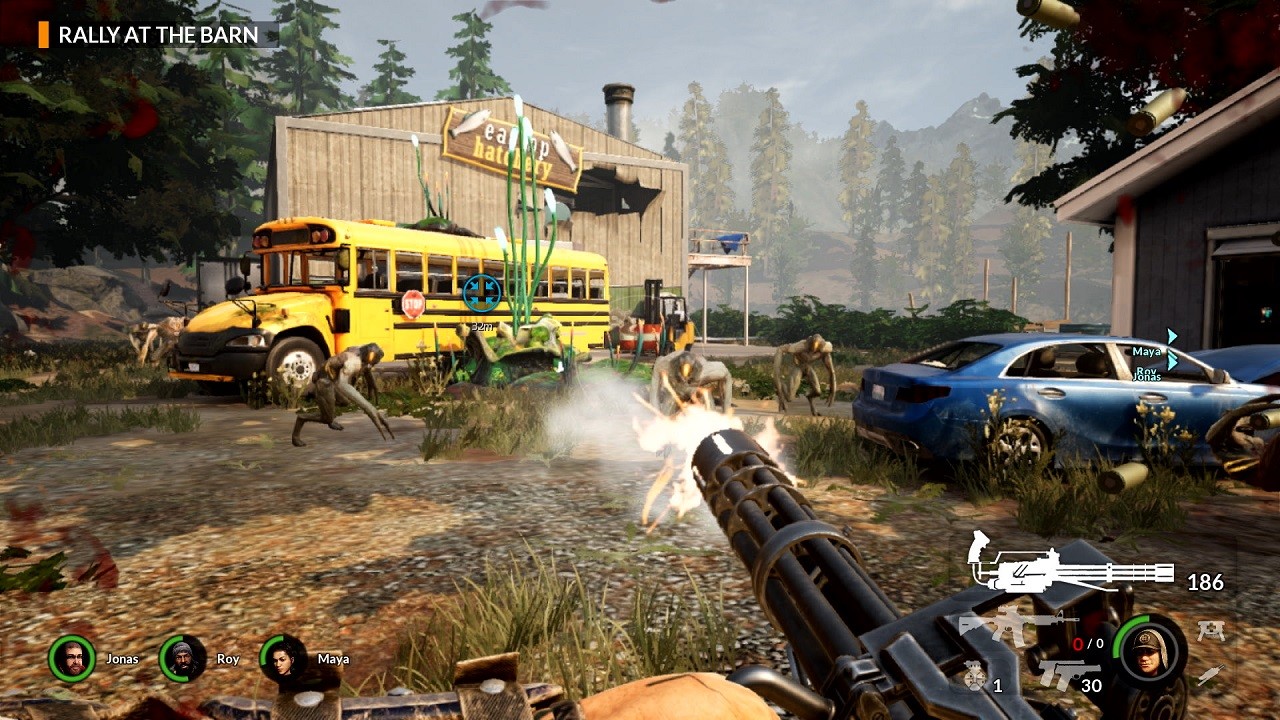 When video gaming first came about, aliens were the main source of our cannon fodder delights. Arcade hits such Space Invaders, Defender and Galaga always ensured that the galaxy was safe and Earth always repelled any sort of alien invasion. However, over the last few years, the extra-terrestrial beings were given a break, as us gamers had a new fight on our hands against the scourge of the zombie apocalypse. Titles such as Left 4 Dead or Dead Island and even game modes such Call of Duty’s Zombies called for gamers around the world to unite co-operatively as we teamed up to fight back the advances of the undead. During that time though and unbeknown to us, the alien races have been secretly re-arming and re-forming to bring a fresh invasion to our beloved homeworld, as Earthfall: Alien Horde blasts a release onto the Nintendo Switch.

Developed and published by Nimble, Earthfall: Alien Horde is a four-player, co-op game that follows a similar blueprint to that of Left 4 Dead. The game can be played in both online and offline modes, either solo with bots, locally with friends and family or online with randoms or digital friends. There are a number of play modes to play, from a variety of campaigns, invasion and inferno. Each of these play modes takes place over a variety of levels, totalling sixteen in all, that offer differing scenarios and locations. Once your game, mode or level has been picked, you then choose from a selection of four characters, or simply pick a random selection. From here, you can then create or join an existing lobby, form your local party or select a difficulty level and the combat effectiveness of your bot teammates if playing solo.

Each level takes place over a large map that holds various objectives the need to be completed. However, between you and your ultimate goal, hordes of aliens lie in wait, ready to pounce, overrun, snatch and explode as they swarm from all directions to put an end to your mission. Working together as a team, you must defend yourselves by using a vast array of weaponry that can be found, or made by using a 3D printer, set up defensive perimeters in order to funnel the hordes into a bottleneck of massacre and equip, re-arm and heal by using grenades, health packs, stim packs and ammunition crates that lie abandoned around each of the districts. 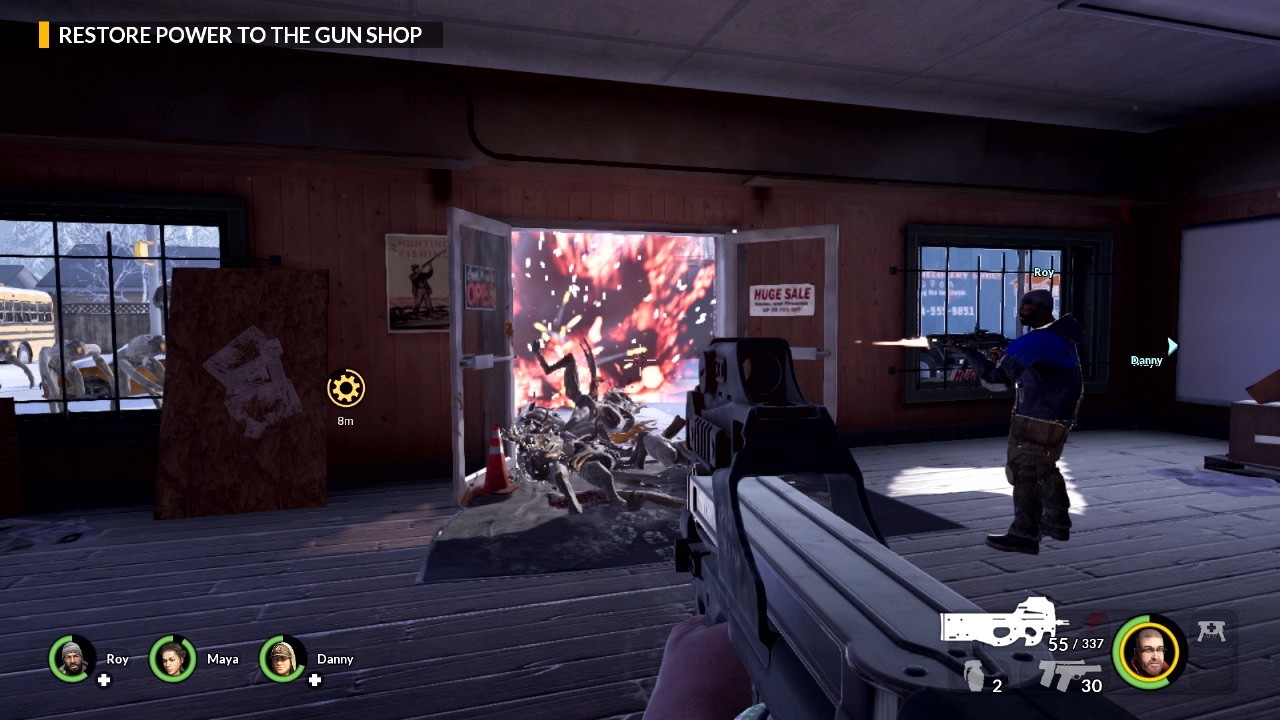 Each area houses a variety of locations, from small towns, open country and industrial complexes. Amongst these are sheds, garages and abandoned properties that can yield items such as printers, guns, portable barriers, as well as a host of other helpful and important items. Your overall objective is to traverse each level and reach your ultimate goal by completing a series of sub tasks along the way. These can range from reaching a certain point within the map, opening a sealed doorway or even finding an axe to cut down a barricade that may be blocking your path. What is vitally important though, is working together to ensure everyone is outfitted with weapons, ammunition, health packs, grenades and stim packs to ensure the team’s survival.

In order to bring a touch of personalisation and to further promote a form of longevity, each character can be customised to create your own look; at least in terms of apparel. However, the more you play, the more items you can unlock for your characters. Prolonged play can also bring other benefits, with a skills set that can be unlocked by reaching certain milestones with the game. For instance, kill the most aliens within a game fifty times and you unlock a perk that increases the amount of ammunition each clip holds. The more experienced you are, the more powerful you become and a more valued member of your team. Repeated play also allows you to learn the layout of the land, as within each level, the locations of items and guns remains the same, giving you an advantage if you know where to look. However, to keep things fresh, the spawn points of the alien hordes always changes, meaning their challenge is never linear in its execution.

There’s a nice variety of weaponry and items on offer here to hold back the hordes. You’re going to need them too, as the game holds quite a variety of alien types, from your normal foot soldier, to grapplers that grab you and carry you off to giant behemoths that require sustained firepower to fight them off. The sheer numbers of enemies that rush you from all directions can be overwhelming at times, yet never unfairly and present a tense and exciting level of play as you battle to overcome the advancing enemies. You do get moments of rest-bite between the waves of alien hordes; allowing you to re-arm, re-equip, heal and generally gain your bearings and form up to take on the next neighbourhood. 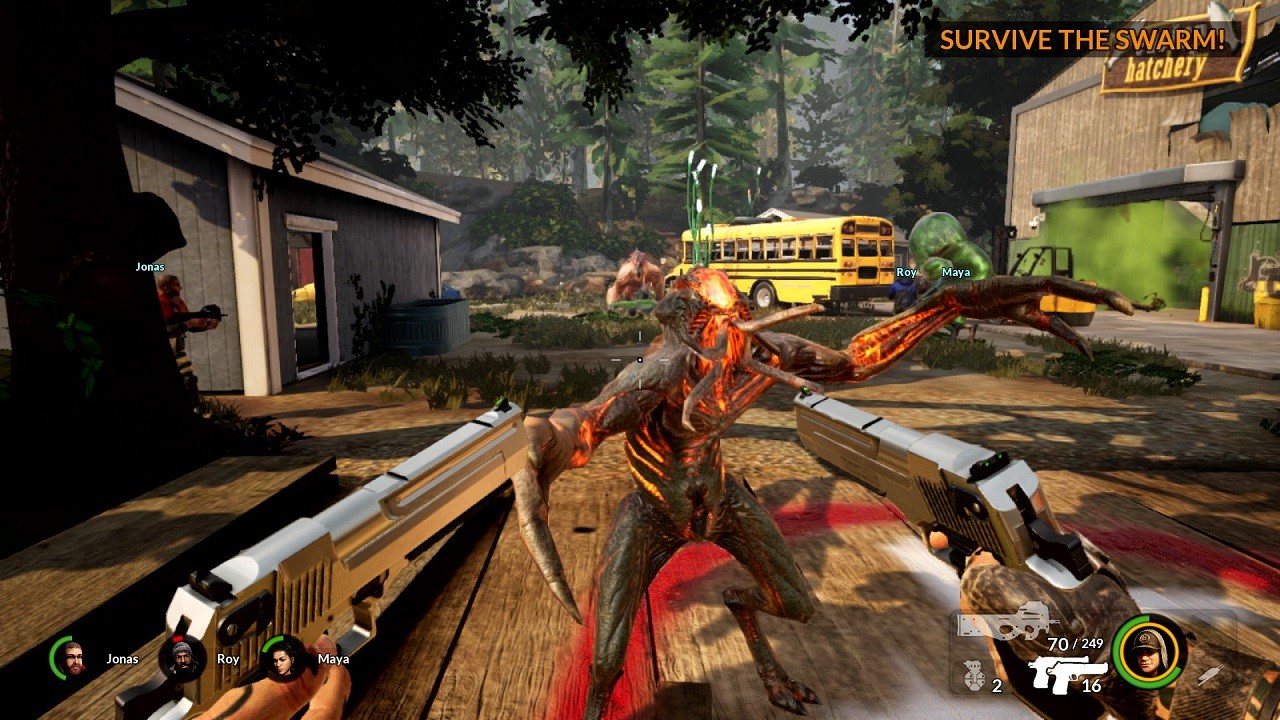 The game excels on a number fronts in terms of gameplay. The levels are quite expansive, each one taking around thirty to forty-five minutes to complete, offer a thrilling and fair, yet difficult challenge and the controls and gunplay work together to produce one of the best shooters currently available on the Switch. Each of the guns feel suitably meaty when you fire them, with the game making very clever use of the Joy-cons’ HD rumble by producing a different vibration with each weapons firing style and rate. It feels great in the hand and adds to the level of gunplay immensely. You can even look down the sights for more accuracy; allowing you to target specific areas or far-off aliens. A variety of options also allows to fine-tune your look and aiming mechanics to produce a control scheme that suits your style of play. Sadly though, there’s no motion control here, although touch screen support is utilised.

Another omission comes in the form of voice chat; something that can be detrimental to co-op, team-based shooters. However, an expansive radial menu is easily deployable, allowing you to communicate with a pre-requisite number of responses. Team-mates also respond automatically within given situations, often advising you on what’s available within a hideout, who needs help and what enemy types are approaching, this creates a great sense of immersion, whether you are playing with randoms, friends or bots and allows you to prepare for any given situation. Graphically, the game looks great too, both docked and in hand-held modes, although it is at times prone to the odd pop-up here and there and a drop in frame-rates when the going when tough, but none of these ever hampered the game play or detracted from the overall experience.

Overall, Earthfall: Alien Horde presents one of the best team-based shooters for the Nintendo Switch; if not, the best. It’s fun, exciting, tense and suitably meaty, with plenty of game modes, content and gunplay to keep everyone’s trigger fingers firmly placed on their button. Its lobbies are usually full and finding a game to join is never a chore; something that can plague a lot of Switch games, but not here. It may hold a heavy footprint at 9GB in size, but its price range, amount of content and long-term appeal more than makes up for this. If you’re looking for a comparison with the zombie-killer Left 4 Dead, then Earthfall doesn’t quite match the same standard in terms of level designs and size, but in terms of gameplay, more than matches its undead counterpart. In fact, it’s a great alternative and being pretty much the only game of its type on the Switch, makes this a very playable and very welcome addition to its library.

Earthfall: Alien Horde invades the Nintendo Switch to produce one of the best team-based shooters currently available for the system.