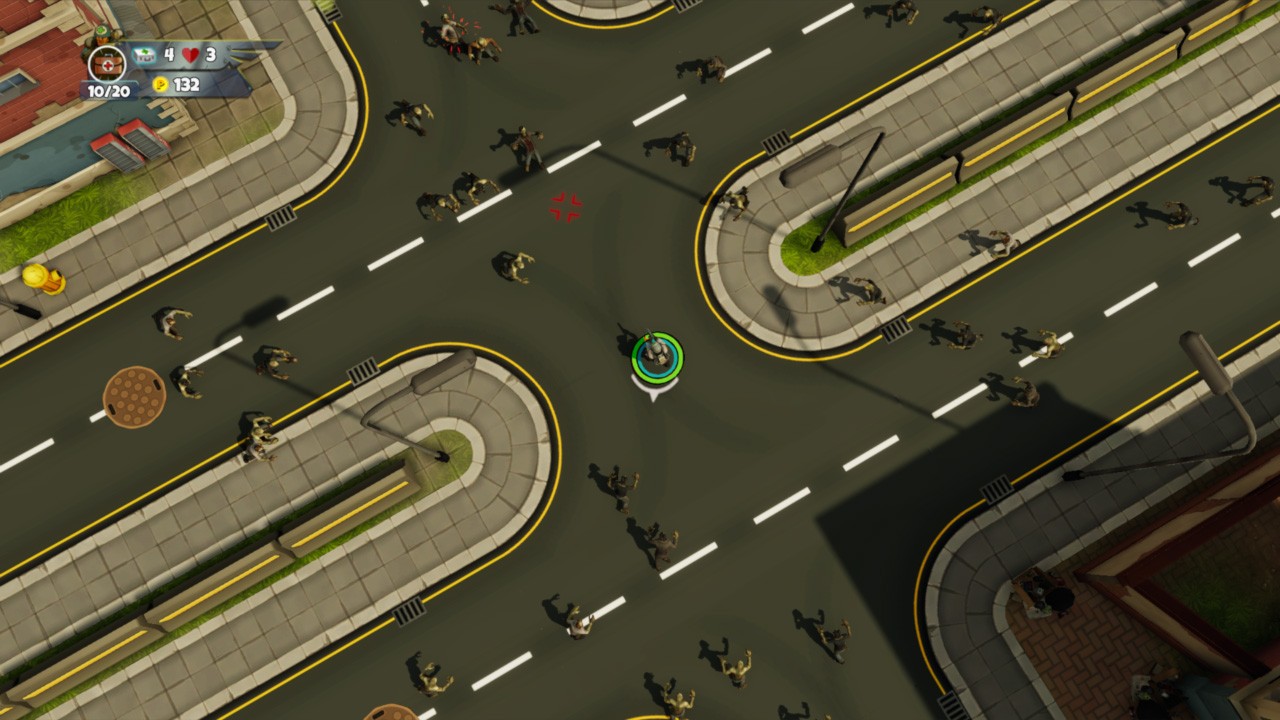 If you managed to play and enjoy FullBlast then you’d be surprised to know that Delta Squad is the sequel, however it looks and plays in a very different way which is rare for games in the same franchise. I’m sure you remember the story of FullBlast, but in case you have forgotten, there was an alien invasion which you managed to stop. You and your Delta Squad were having a nice break, but as you know breaks for heroes don’t last long. General Rumanovsky is back and wants to control a virus that will end humanity. Delta Squad is back to stop these dastardly plans coming to fruition.

This time round Delta Force is played from a top down perspective which is where the similarities end with FullBlast. In FullBlast you were in charge of a plane, in Delta Force you are on the ground doing your damage. Delta Force has 5 levels which each contain 10 missions, there are also 5 sub levels which become accessible after completing missions. There is the main story mode, or you can try Survival which requires you to survive wave after wave. There are difficulty levels ranging from easy to hard and you can also enable friendly fire. Friendly Fire? you may ask? Up to four players can play in Delta Force, so if you have four controllers then hop in, and turn the friendly fire off. Delta Force does have a nostalgic feel to it, definitely a game with nineties influences. 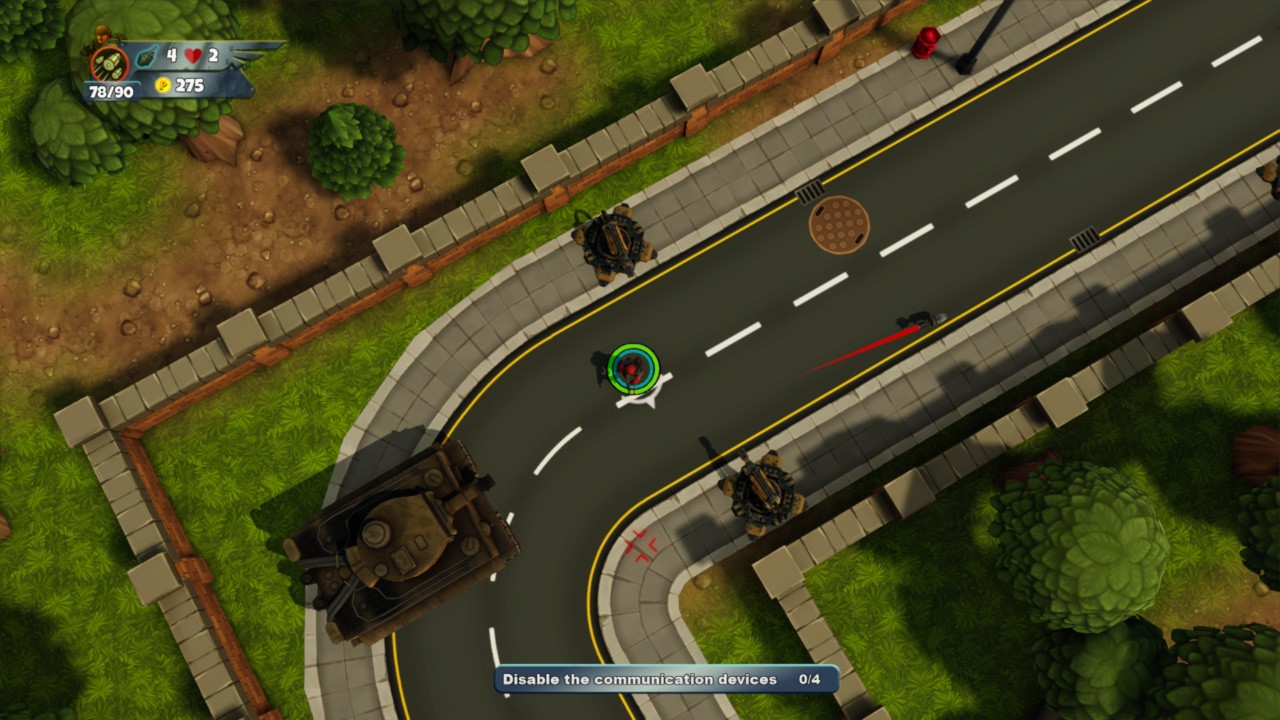 Delta Force opens each mission with your exiting a truck, before each mission you get to choose a character, it’s the standard set. Heavy Gunner has good weaponry but is slow, Medic has medipacks but terrible defence, Infantry has a reasonable arsenal and is quick etc. Briefcases fall from the sky detailing what the mission is, an arrow appears showing you the way, you will find yourself travelling over the same areas of the map a fair bit because the maps are quite small.

You have a weapon that automatically reloads and a secondary weapon such as a grenade launcher that can be used sparingly as ammo is limited, but to be honest in Delta Force you’ll just be holding down the main weapon button all the way through. Depending on your character when you get hit then you lose health then if that goes down to zero then you lose a life. In Solo mode, if you lose all your lives the games ends and you have to restart, however if more 2 or more of you are playing Delta Force then you’re able to carry on and choose a different character if you wish. 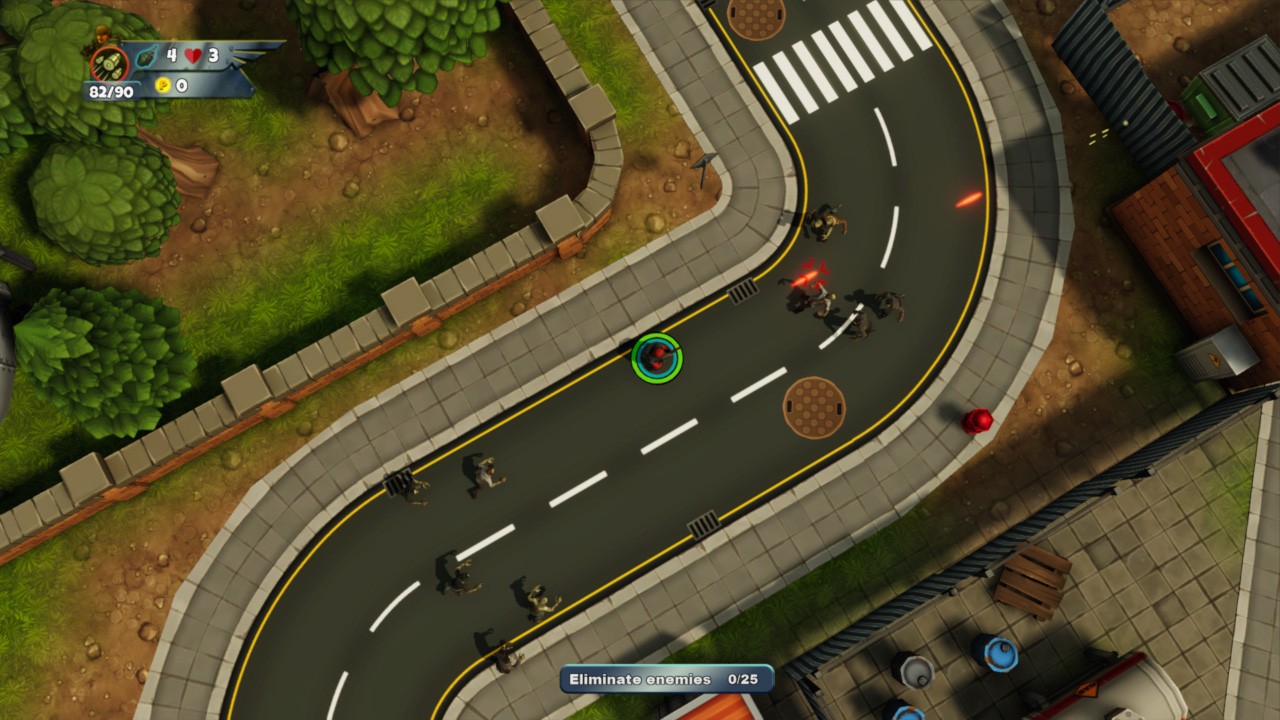 Delta Force is pretty repetitive, you will just constantly hold the shooting button down and make your way around the map. Some soldiers come out and will shoot at you but are rarely a problem, zombies are everywhere but they are easily dealt with, there are turrets which can cause some damage but it’s one of those cases where you can simply move out of range of their bullets. The missions are something you’ve done many times before such as holding your ground in an area or destroying a communication tower. There was one major glitch that appeared in Delta Force. At the end of a level there is a boss to beat, just slightly more annoying that the soldiers you come across in the main game. If the boss kills you, then you can restart the boss level. However on more than one occasion when you restarted the boss level, there was no boss, the usual cutscenes played out but when you get back to the main game, the boss character isn’t there, so you can’t complete that level. A very annoying glitch, one not to expect in 2019.

Delta Force is a fairly simple game, if you like dealing a lot of damage which brings back memories of the nineties then you will find an hour or two of fun. However it’s a pretty short and repetitive experience, once you’ve completed Delta Force you won’t be going back to replay it. It’ll be interesting if they continue with the franchise after such a big change from FullBlast. Delta Force does feel more like repetitive cannon fodder rather than an experience to replay.

The makers of FullBlast are back with Delta Squad. Lets stop General Rumanovsky once again!