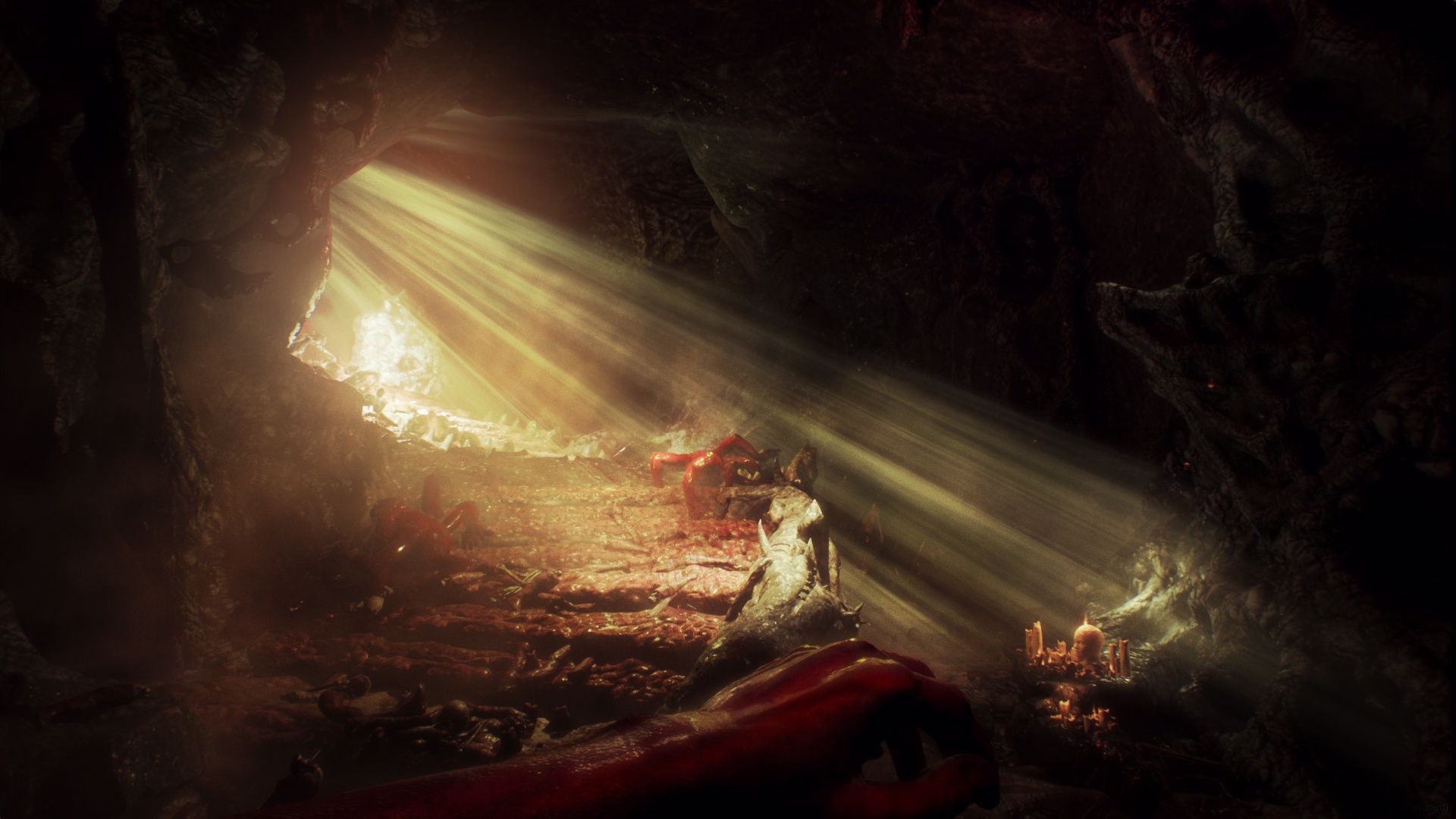 We all know that adult-orientated titles or games that contain a mature content have never been synonymous with Nintendo. The likes of Grand Theft Auto have always been wishful thinking for Nintendo players. Heck, even Call of Duty on the Wii U was a blessing. However, ever since the release of the Nintendo Switch, the Japanese gaming giants have seemed to relax their stance on games that contain violence, nudity and sexual content. Its made the Switch all the better for it, allowing a new generation of gamers to experience titles that may havebeen missed in the past. Despite Nintendo’s more laid-back approach to such games, it still came as a surprise when Madmind Studios and Forever Entertainment’s controversial title, Agony, revealed it was bringing a hellbound release onto the Switch; even more so with this uncensored edition of the game.

Released on a variety of other platforms last year, the majority of the consensus around the game was that, despite containing a abundance of gory and sexual content, it wasn’t enough to detract from the overall quality of the gameplay. However, having never played the game before and being slightly intrigued into what the fuss has been all about, I decided to step forth and delve into the depths of this hellish game. At its core, Agony is a survival horror game. You play the role of a fallen soul who resides within the depth of Satan’s lair, as you embark on a journey to discover the location of the Red Goddess; a high priestess who holds the key to salvation and a means of the soul escaping eternal damnation.

However, the path is fraught with a series of puzzles and demons; all hell-bent on preventing you in reaching your goal or devouring you for all eternity. Viewed from a first-person perspective, you follow the twisted paths of hell, as you work to solve a series of puzzles that allows progression, as well as avoid the unwanted attention of the prowling demons. At its heart, this is very much a stealth game, as finding a place to hide from the insta-death of the demons is usually the way forward. There’s no combat element, at least to speak of, but you do have the ability to summon flames, but in all honesty, its usually best avoided as its execution can attract the attention of any nearby enemies. 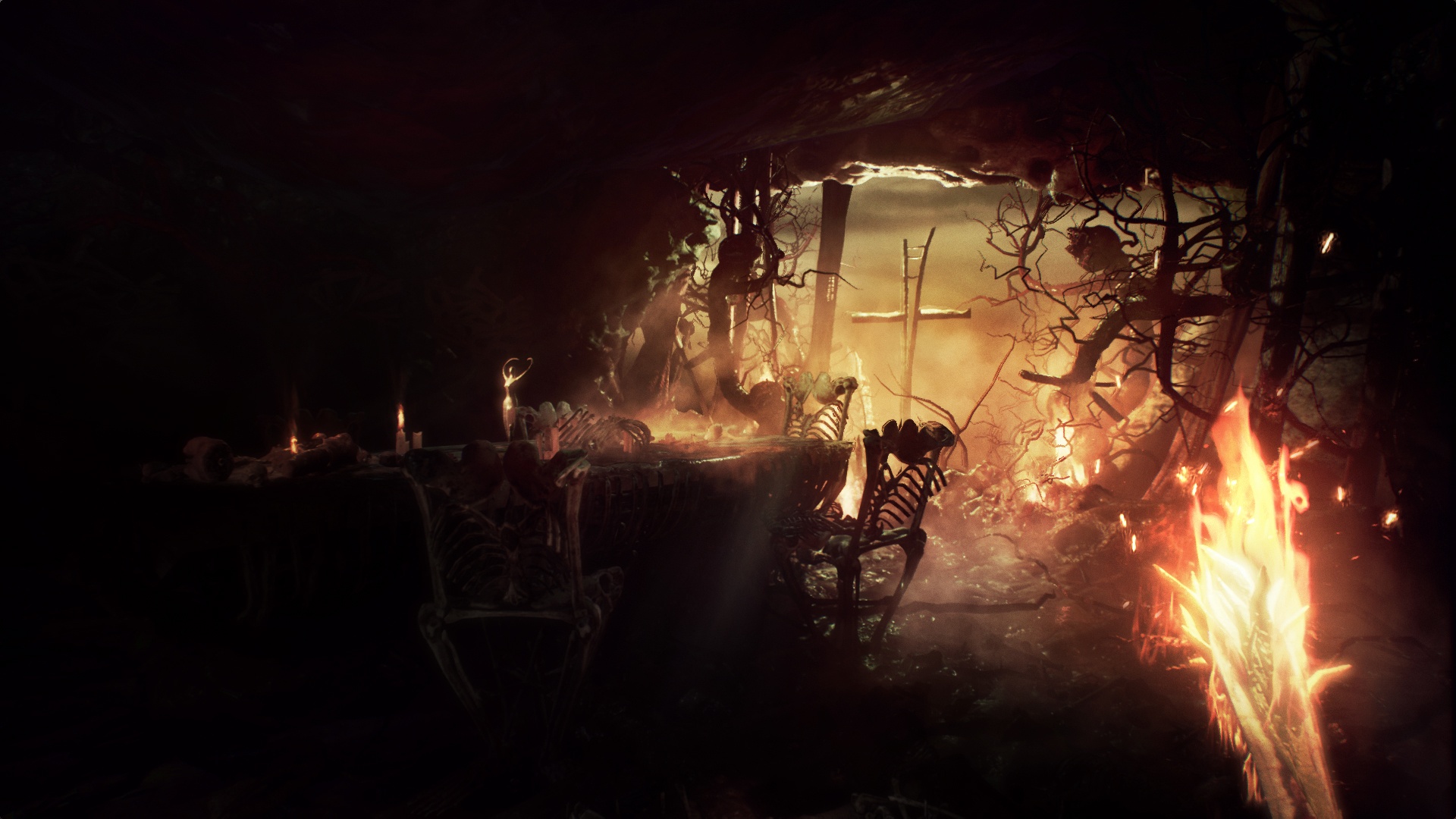 One interesting mechanic though, is the ability to trans-morph your soul into a nearby lesser-being; essentially possessing the form of another. They act as a sort of second-life, as should you find your soul leaving your body, you have a limited amount of time with which to find a new body to possess; although be careful, as some souls cannot be so easily budged. However, should you find yourself unable to save your soul, a series of automatic checkpoints, or soul mirrors as they are called, do provide some rest-bite as a prevention to starting over again; although, be warned, as these checkpoints do lay few and far between. Unfortunately though, this is a mechanic that is further hampered with the frequency in which you find yourself within the danger from the demons.

Although the puzzles you encounter are far from infuriating, the amount of times that you’ll die and respawn can be frustrating. In a game where all you want to do is advance to see what it holds next, meeting a constant death around each corner can make this a tedious journey in the long run. You can avoid such a fate in a number of ways, such a running away and finding a spot to hide as you hold your breath; hence the stealth element of the gameplay, but in large, its execution is largely poor and doesn’t match the same level of intensity, or fairness, as say Alien: Isolation. The other way to give yourself some chance of redemption is through a number of options that allow you to personalise the game somewhat with constant saves and a lesser need to possess nearby souls.

However, despite its frustrations, the world, or underworld, in which the game is set provides an intriguing experience and is the one aspect of the game that does drive you forward. Its art-style is distinctly hellish, with severed limbs that flail from the blood red ceilings and hands that grab from with the walls. It’s a suitably twisted place that holds many sights and sounds that can be unnerving for the faint of heart. If you find its initial settings a disturbing prospect, then its later offerings can hold a level of shock; even bordering the distasteful with some barbaric and disturbing imagery. There’s a lot of nudity within the game, from full human genitalia to acts of sexual gratification, but some images, such as using the demon babies to act as a cement during the building of a wall; their wails screaming as they are crushed from each boulder could be considered distasteful by some; but that largely depends on what you consider horrific or not. Me? Well, I can easily distinguish between video games and reality and can appreciate these scenes for what they are, which is an addition that is included into the game for shock value and nothing else. 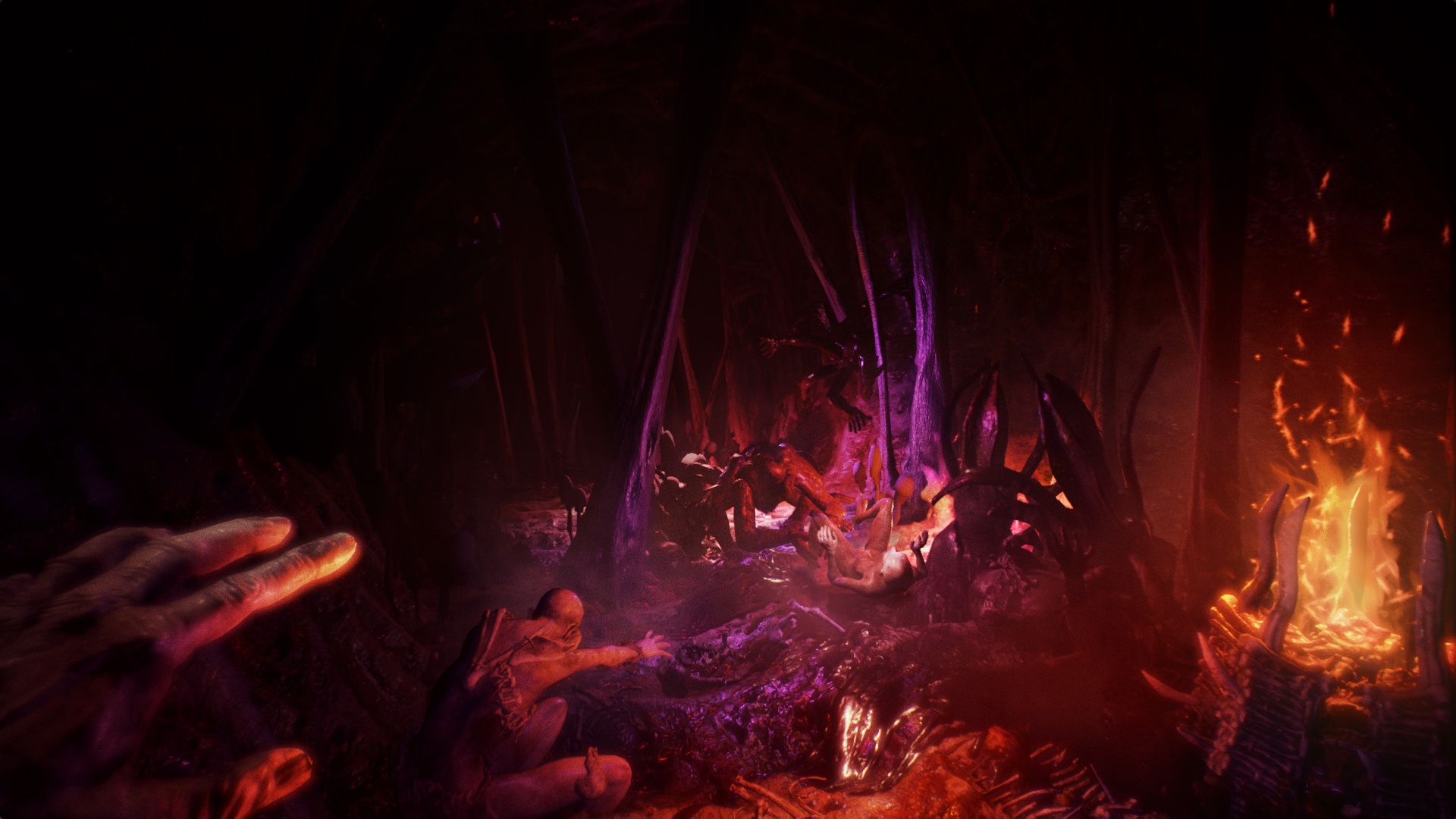 Despite its contents and themes, I couldn’t help but think as I played through, that the graphic representations within the game were simply put there to sell the game. As if you take all of that away and look at the bare-bones of what remains, you are left with a very underwhelming experience that can be difficult to get through. Not because of what it holds, but in the pacing of its style and largely frustrating and uninteresting elements of its gameplay. However, that’s not to say that is is a bad game, or a trash game, as its presentation is largely exciting and interesting; albeit one that has been scaled down to allow it to run on the Switch. A lot of the details have been lost amongst the tinge of some blurring, but for the most part, there’s plenty to see and do within the depths of hell.

Speaking of which, a few technical issues remain within the game which saw me stuck in the scenery a couple of times and some stutters in frame-rate were present. The audio quality of the voice work was also very amateurish, giving the game an overall feel of a low budget affair. Again though, the options available to you within the settings menu do allow you to fine-tune your experience and present a more fluid experience to suit your own personal preferences. That being said though and despite a lot of nuances, this is still a compelling game to play, with some beautiful imagery and truly horrific moments that do make this a stand out game within its genre.

Overall, Agony is largely a game of two halves. In some aspects its actually quite beautiful, in others it is very horrific, but there are also too many points that either frustrate or don’t really work. If you can see past these though, then there is plenty here to keep you engaged. Even over the long-term, there’s plenty of content to warrant a re-visit into the depths of damnation. I couldn’t help but feel that this was a game that deserved a bit more care and attention before seeing the light of day, as it does hold moments that could have easily propelled this title into one of the biggest games of the year and in those terms, can be a fun game to play. Even if you’re slightly intrigued by what this game holds in terms of content, then it’s well worth having a look, as I doubt very much that we’ll ever see a game like it again. Just be prepared for a hard journey though, both in terms of broken mechanics and technical performances.