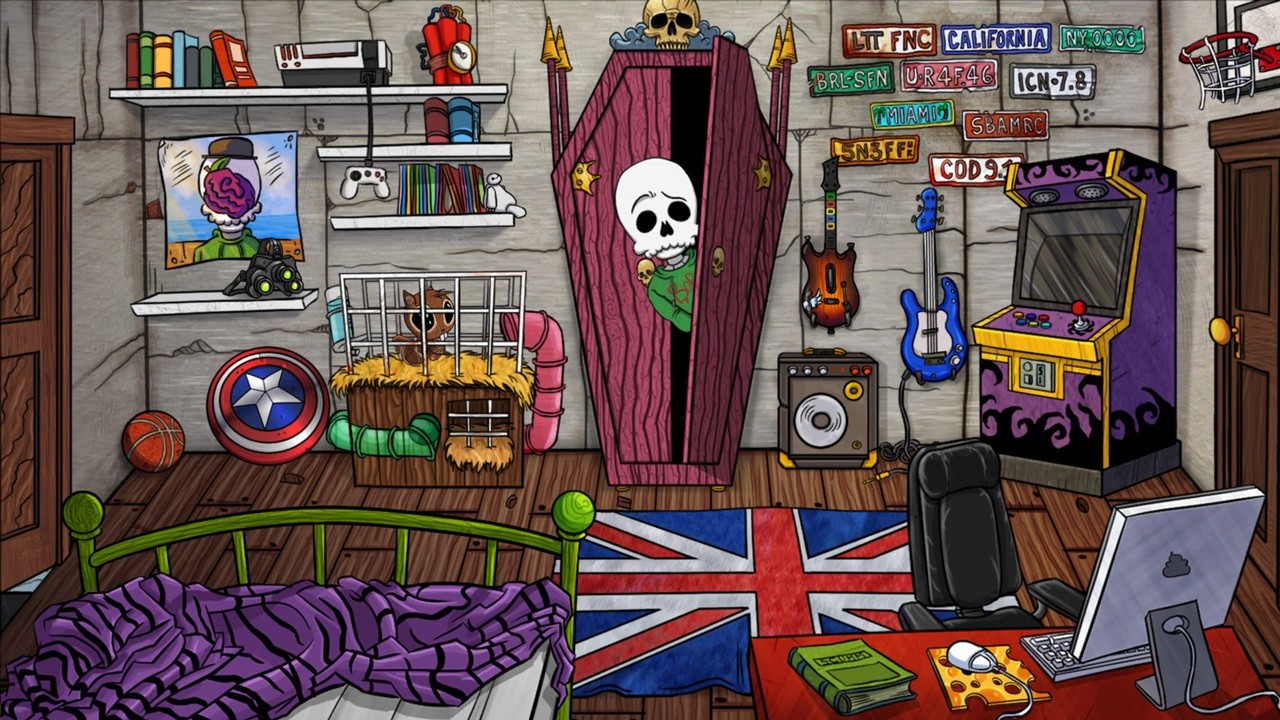 I can confidently begin this review with the affirmation that the point and click adventure genre is very much alive. Alas, the protagonist in The Wardrobe: Even Better Edition from CINIC Games and Gamera Interactive is very much dead. That’s not a spoiler as it’s clear from Skinny’s gaunt appearance that he is indeed a skeleton.

Our tale begins when Skinny and his best friend Ronald go for a picnic, as boys do…? Ronald innocently hands a plum to his BFF, unaware that Skinny has a severe allergy. This sends Skinny into anaphylactic shock and his subsequent death. Being a true friend, Ronald panics and leaves the scene immediately. By the time Skinny is lucid again, he finds himself confined to Ronald’s coffin-shaped wardrobe. From here, Skinny watches over his pal in the hope to reassure him that everything is ok. He has every intention to do so until moving day threatens to split the two apart. And this is where the game kicks in.

The Wardrobe: Even Better Edition is a traditional point and click adventure that has you solve a series of puzzles with an endgame of being reunited with your best friend. It is familiar genre territory as you explore a series of locations, picking up anything that isn’t bolted down and combine or use – sometimes without any seemingly logical purpose. All very point and click methodology then. Initially, Skinny starts out in Ronald’s bedroom and must somehow get himself onto the removal van. There are obstacles in the way to overcome, and this means it’s time to mix up your inventory. 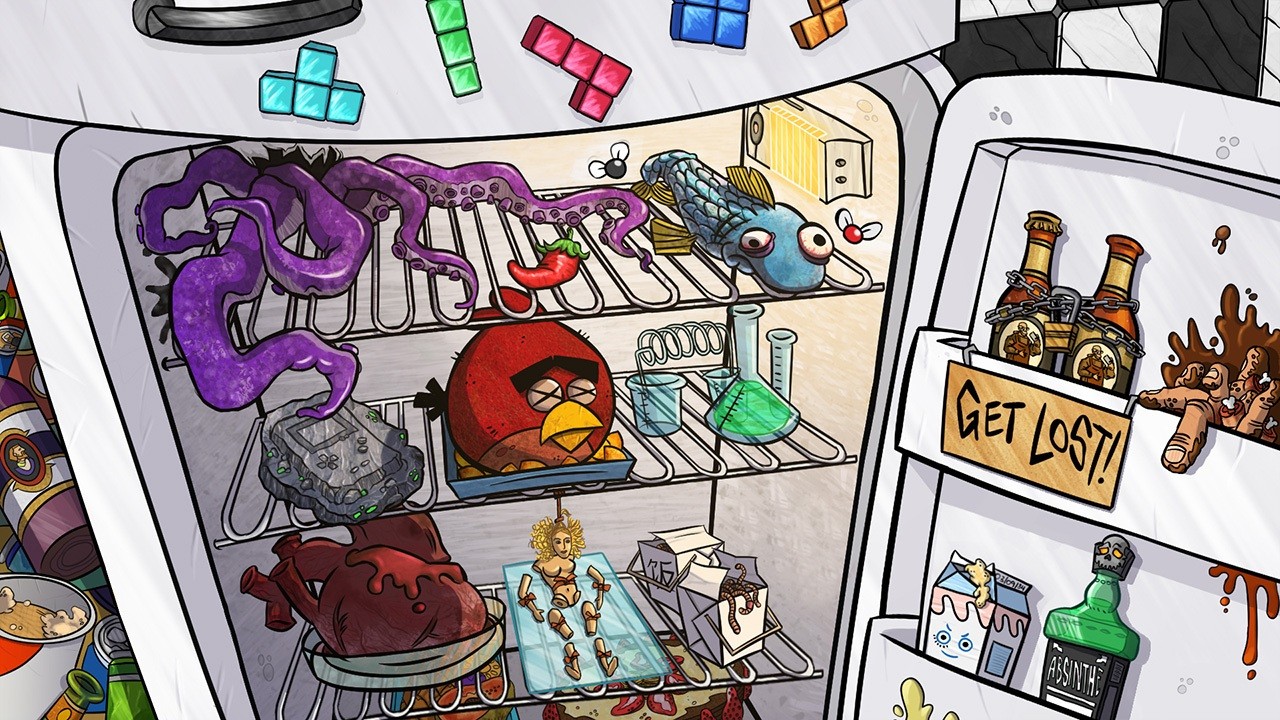 All adventurers have a penchant for kleptomania and have a unique way of storing their loot – be it deep pockets or a rucksack. Skinny is quite unique as he stores everything he’s holding behind his ribcage, which can be accessed by pressing ‘Y’. Press the ‘A’ button, and he’ll give you a brief explanation of the item, or hold the same button to drag onto the screen or combine with another object. It’s worth mentioning that there is no HUD either. Of course, there are no health or death issues (is that a joke?) in this type of game and much like Grim Fandango, you can dive deep into the scenery without any verb lists cluttering the screen. Movement takes the form of traditional point and clicks in that you click where you want to move Skinny, rather than move with the analogue stick like most new titles do. This isn’t an issue whatsoever as locations are relatively small so it literally takes two or three clicks to get from one side to the other.

Should you find a point of interest or person you wish to speak to, hold the ‘A’ button and an icon list appears where you can inspect, pick up, use or talk to the area of interest. Any veteran of a LucasArts or Sierra title from the same genre will know that the combinations of objects can be exhaustive. Still, it doesn’t seem like a chore here. Sure, there is frustration on what or where to go next, but Skinny interacts with you the whole time, and almost every piece of dialogue is something new.

The fourth wall is continually broken here as Skinny talks to you directly and makes it clear he’s unhappy with your thought process. Often insinuating or directly informing you that you aren’t very bright. And that’s what really makes The Wardrobe: Even Better Edition stand out from its predecessors – the dialogue. Everything is voice acted, and almost every line is unique – no signs of repeated, canned responses. It really was impressive how much work has gone into the experience. A little more on the sound in a moment, but we have to address the visuals.

When I initially saw images for The Wardrobe: Even Better Edition, it wasn’t that the artwork wasn’t good – it didn’t really pop for me. I’ve been burned a few times with some of the Nintendo Switch eShop titles that looked great but ended up having clunky animation and uninspired backgrounds. The Wardrobe: Even Better Edition is far from it and is the opposite. Character models are brilliant – I like the art style, but I have to say the locations are insane. Each area has an abundance of Easter eggs to find. When I say ‘find’, I merely mean admire – it’s not a challenge to complete, but every area was a case of finding something pop culture related. There’s even a Where’s Wally moment. 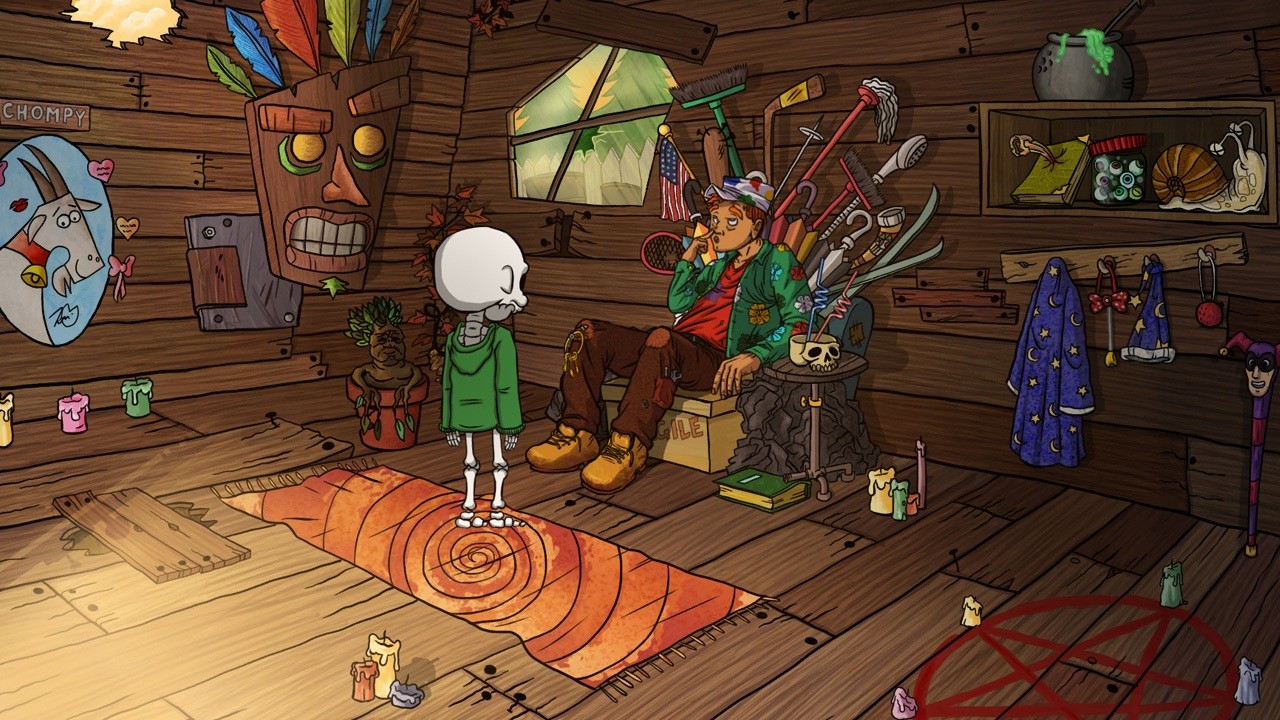 This was clearly made by geeks. I mean that with the greatest respect as they seem to have catered for such a wide range; mostly those of us lucky enough to experience the golden age of point and click adventures. In one area will be an Adventure Time reference, another will be for BioShock. Most impressive was a poster I clocked from They Live – a cult film by John Carpenter, one of my favourite directors. Referring to the press release information for The Wardrobe: Even Better Edition, there are over 40 hand-drawn locations and 70 characters. To summarise, the presentation is stunning and hands down one of the best looking adventure games I’ve played in a while.

I had very slight issues with the game, which are in no way deal breakers, but something to mention. A couple of times subtitles showed up when they weren’t selected. No tears were shed, but it was a little strange as they were erratic. The voice talent for Skinny is great (quite mature for his assumed age), but it does sound like he’s talking into a bucket sometimes. Now, I’m no sound engineer, but there were quite a few times where it sounded like characters weren’t in the same place at the same time – one would be tinny, the other a little bassy. It’s not a problem, but I was a bit too aware of it at first.

Unsure what the ‘Even Better Edition’ would entail, I looked it up. Other than mostly fixes for the PC release, it does state that the sound was improved upon, so maybe the voice segment quality wasn’t initially that great to begin with. Regardless, the voice acting is brilliant. I wasn’t connecting with Skinny at first, but after about 30 minutes, I was won over. I’d be audacious enough to say he’s on par with the mighty pirate that is Guybrush Threepwood. Other than that, there were zero technical issues with The Wardrobe: Even Better Edition on the Switch. I played mostly in handheld, but have to say it looked brilliant on the large screen TV.

More importantly, how long will this keep you going? There aren’t any in-game achievements that I was aware of in the menu. The Switch doesn’t have any trophies to unlock natively, so your motivation will be the story and interaction with the world the developers have created. I don’t actively time my play sessions, but I finished this in a couple of days – notably because I was enjoying it so much, I dedicated a lot of time to it. As expected from a typical point and click adventure, there are a few moments of despair on what to do next, but it’s not as frustrating as it may sound. Will I come back to this and play again in the future? Absolutely. This is easily one of the best point and click adventure games of modern times, and I sincerely hope that it catches on a bit more and we see more titles like this.

The Wardrobe: Even Better Edition Review

A homage to the classic point and click adventures by the likes of LucasArts and Sierra that is witty, vibrant and challenging enough for any keen adventurer, though perhaps of the older variety. This isn’t for kids.