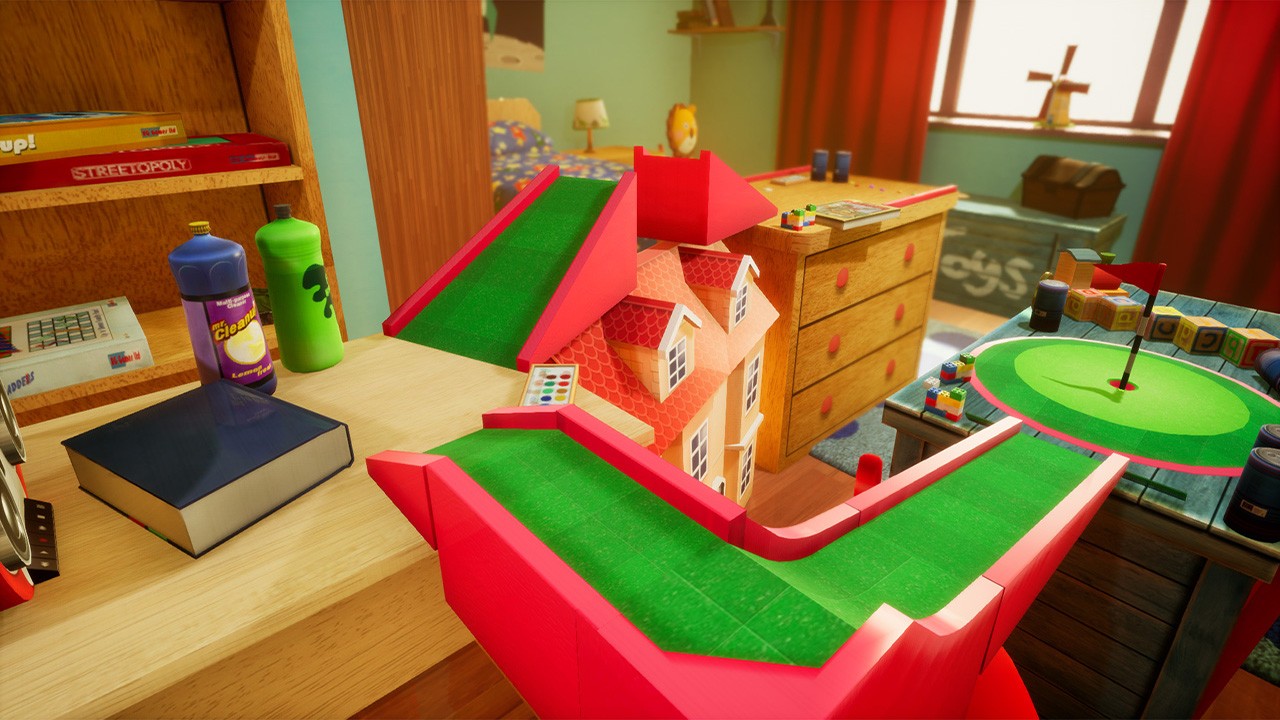 Allow me to prefix this review by saying that I’ve played a lot of mini and crazy golf. A lot. I love a good golf game but the thing is, there hasn’t been a worthy golf game on any console since Tiger Woods 2004. Okay, House of Golf is clearly not meant to be a pro golf simulation – more of an arcade putt putt-style title, but is it any good? Does it get the old golf balls jingling with excitement? Let’s take a look.

Firstly, House of Golf looks pretty good. Textures are smooth and the colour palette is rich, making the environments that you play golf in feel like they have depth – they’re visually interesting. The game takes place across various rooms in a family home, so expect to see themed items for different rooms, soft lighting to help you focus on your shot and questionable interior design choices that you certainly wouldn’t want in your own home. *cough, ahem*. 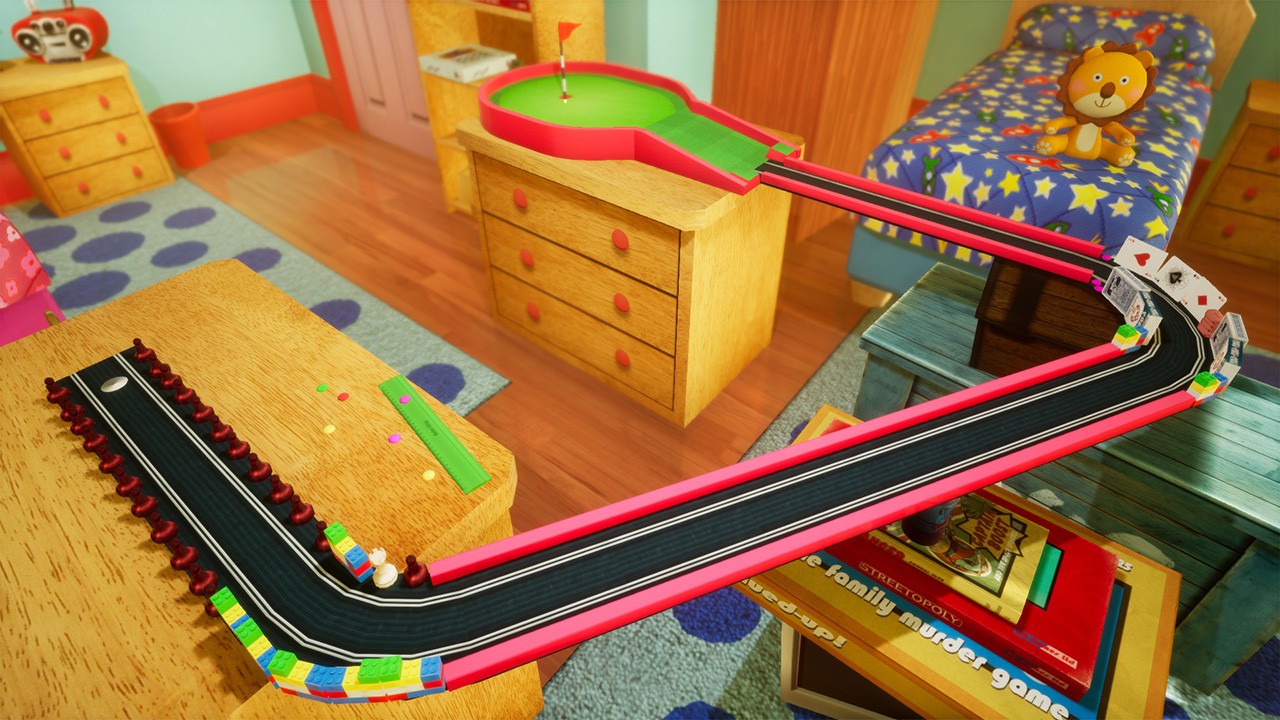 There’s not really much to say here when it comes to music and sound. The game has the swoosh and plonk sound of a club hitting a ball, which is odd because you’re putting… It also has the satisfying pop pop sound that the ball makes when it drops in the hole. In House of Golf, the main thing you’ll be listening to is the music. My god. The music. It is so dreadful for about 30 minutes, but then it becomes weirdly addictive – I found myself humming it during my day job!

The crux of any good golf game (in real life and virtually) is solid course design. Without it, a round of golf is always going to be sub-par. Sadly, this is where House of Golf plops straight into a water hazard. More often than not, the holes suck! It’s like the developers have never played crazy golf before, or else they’d know that players need a risky option to make themselves look awesome whilst two-putting that birdie or eagle away with aplomb. On any of the 3 difficulties in House of Golf, you’re expected to essentially take the safe putt every time – taking several shots to get around obstacles before making it to the hole. This requires very little judgement skill. 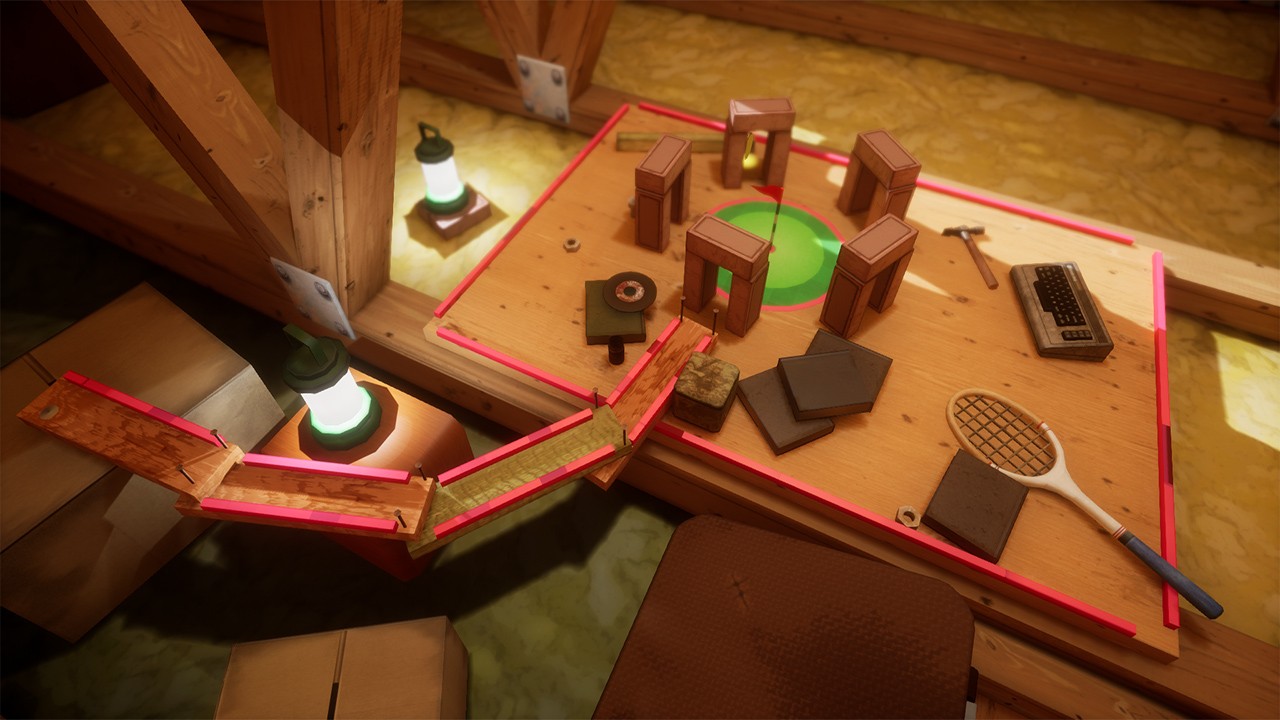 My other issue with House of Golf is the fact that you get a ghost trail before taking a shot. This shows you roughly where the ball will go based on the direction you are facing and the amount of power you apply. It is frequently wrong and I’ve taken a shot lined up perfectly to go in based on the ghost, only to have the ball fly off in a random direction because I was too close to an object for it to properly register. This really sucks the fun out of couch co-op where a hole can quickly turn sour because you’re stuck behind a box of cornflakes or something.

Despite the two main issues that I found with the gameplay, House of Golf is currently being propped up by the fact that A) it looks quite nice, B) it has couch-coop multiplayer for up to 6 players, and C) I’ve weirdly grown to enjoy the repetitive stylings that makes up the soundtrack. I should also mention that there are several balls to unlock based on progression goals like playing X amount of holes, beating each room on a certain difficulty etc. The bottom line here is that House of Golf could be a super fun crazy golf title for the Switch, if the courses were fun to play with an element of risk and the ghost trail gets fixed. Until then, it’s just another average attempt at an indie golf game.