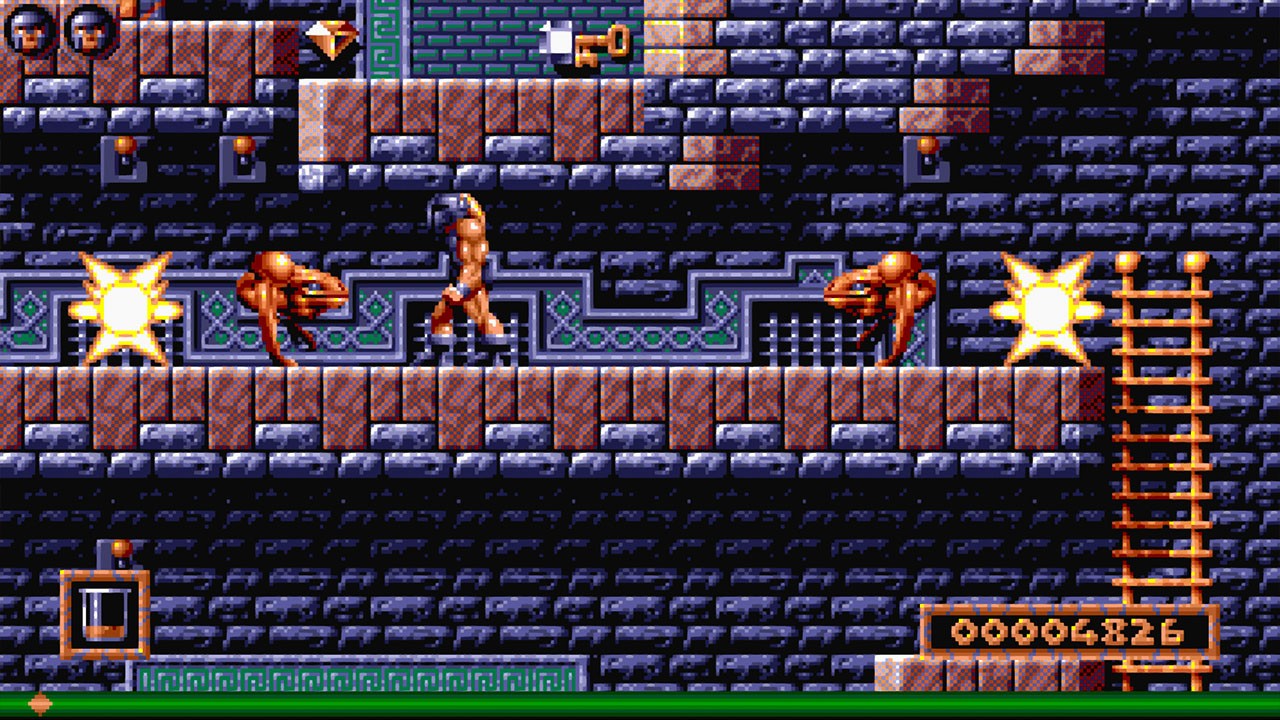 There’s been a recent influx of remastered titles on the Nintendo Switch lately. It happens with songs on a regular occurrence, so why not some classic games? ‘If it ain’t broke…’ Well, Gods was an enjoyable game back in the early 90s along with the likes of Speedball 2, Chaos Engine and of course another remastered title on the Switch, Toki.

It’s not so much that Gods needed a remaster, but perhaps a reboot for new gamers to experience this platform puzzler. By default, the remastered graphics show in Gods Remastered – there’s no point revamping everything if nobody can see what you’ve done. However, it was an absolute delight to be able to switch to the original graphics and soundtrack by pushing down on the right analogue stick. Not that I’m a purist, but I immediately switched over to the classic graphics – not liking the new version at all. Once the nostalgia wore off, I turned back and forth to the sparkly visuals and sound, and it is indeed excellent, but anyone new to the series may find the approach a little dated.

The goal of the game is to ascend Mount Olympus and be granted immortality, so you can take your seat with the gods. A fast-track approach would be to head for Olympus. Instead, you head into the city with a dungeon vibe to it, featuring an abundance of creatures that will get in your way, switch type puzzles and more ladders than a window cleaning convention. Gods Remastered is a 90s platform game through and through; not without its infuriating levels of difficulty and, if you’re like me, accidentally fall off the edge of a platform and dying in the process once too many times. 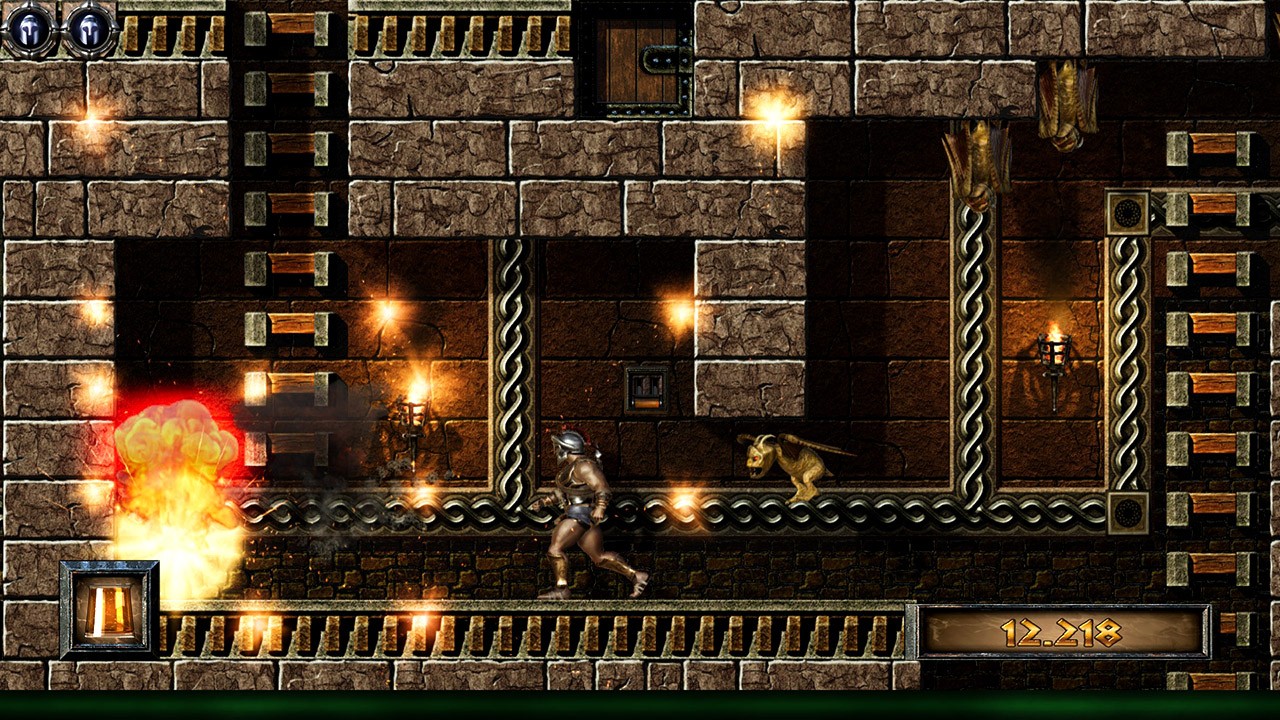 It’s much like I remember it – the graphics (original) are great. At the time it was pretty advanced. The animation never got the awards, but the enemy projectiles, character models and level design were top notch. Now, as I mentioned, Gods Remastered seems very dated, but the new approach ups the game a bit with a much more polished look, though the irritation is still there when you can’t aim at some of the lower enemies and have to take a few steps back to do so. While the animation of the character appears to pay tribute to the original, I wasn’t a fan and felt it was like Robocop had been transported to ancient Greece.

Controlling your hero is straightforward; left and right, up and down to ascend/descend ladders and to duck from oncoming attacks. There’s a button for jumping and another for firing your weapon, and that’s it. Forget about running everywhere – though it’s much needed. He’s incredibly slow, and movement feels sluggish. However, this is exactly as I remember it and aside for the facelift, it’s still the same game. Jumping back to weapons, you have daggers to start with and can eventually upgrade those to have further projectiles of stars and other pointy objects. There aren’t any melee weapons or attacks, so get too close, and you will lose your health – represented by a small jar of liquid that frequently bubbles. A bit ominous – even for a proposed god.

Each time you pick up something of importance, a notification appears at the foot of the screen in a ticker-tape fashion. I have to admit, I didn’t pay attention to this in the original and considering the screen real estate, seldom bothered here either. Not there are any revelations to be found, but it would have been good to have seen these announcements within my eye level. Just a quick note before I forget, and not to dwell on it too much – the loading times for Gods Remastered is far too long. It occurred to me when I went back into the game to jot down a few more notes, realising that it still hadn’t loaded. Back to the show. 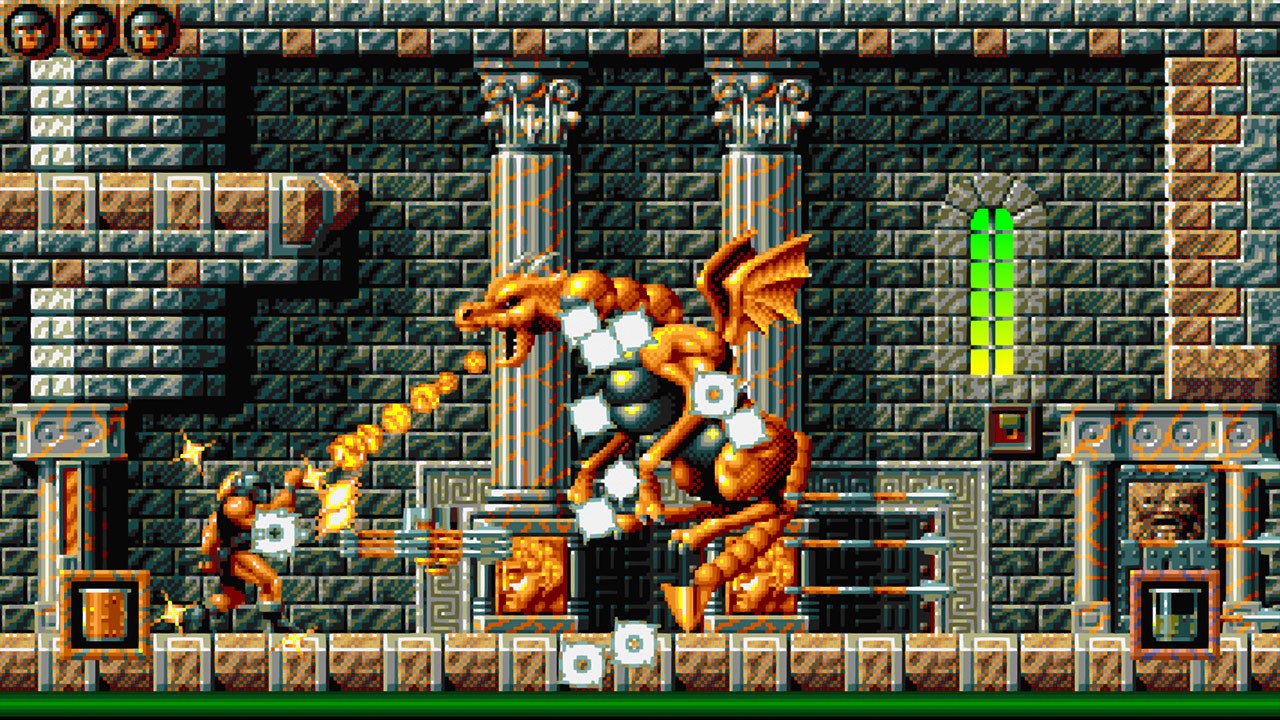 Each level is made up of a series of worlds. These are mostly the same locations, just a little grander each time with the challenge increased; more enemies, more switches. I don’t appear to be selling it that well, but it’s a good game but showing its age for newcomers. Between each level is a guardian you have to defeat. Surprisingly, these aren’t that hard. They have the same little jar of life essence that you can see deplete with each attack – granted, you need to hit them more than they hit you, but most of their attacks can be dodged. It’s the common enemy that’s more frustrating – they can spawn without warning, and as you don’t have any melee attacks, you take damage almost immediately. Once you’re out of lives though, you can continue to the beginning of that world (not the level), and it appears to be infinite continues. I seem to recall the original version having minimal credits to play with, but you would be granted a password to start at any level.

Greek mythology is a slight interest of mine, so looking back at some of the characters in the game look a little out of place, but it’s hardly a simulator. In fear of giving out a spoiler, there is an appearance of a particular bull-headed figure. Overall though, Gods Remastered has a classic feel to it – both in the Greek influences and as a 90s platform game. There are even the odd secret rooms to find which are sometimes impossible to find if not for a chance then when a friend in the playground would pass on a tip. Collecting all these hidden goodies build up your overall score and allocates the amount you can spend with the merchant at the end of a world. With the merchant, you can buy extra lives, weapon upgrades and buffs that can be used in-game. If you’re familiar with the original Gods, by the Bitmap Brothers, the merchant screen is quite similar to the shop owner in their other title, Xenon 2. Hopefully, I’m not the only one counting the days for an announcement of this title.

For me, it’s another nostalgic title, so perhaps I should delve back into a few newer titles. The classic feature was welcomed with open arms and what attracted me to it in the first place. Having spent a bit of time dying a few more times than I would have liked to have happened, it’s still enjoyable to play, but by today’s standard, the speed at which you move (and thankfully the bosses) is a trifle too slow – arguably sluggish. There is an addition of a speed run for the modern gamer, but in my opinion, this is just filler as I couldn’t bear to play this quickly – it’s too fiddly. As for everyone else, if it wasn’t a game you played in the past, you may interpret as any other indie title, but do give it a chance. The price has dropped since the initial release, so much more practical but I believe it’s been available on PC at a significantly lower cost. As an older game, should you master the mechanics of the game, it shouldn’t keep you away from your backlog of games for more than a few nights.

A classic platform action game with a reasonable amount of puzzles. The inclusion of the original presentation is a nice touch, and the remastered visuals are an interesting addition. However, this may be for retro gamers moreso than newcomers.

Spot-on port of the original

Classic graphics and revamped ones if preferred