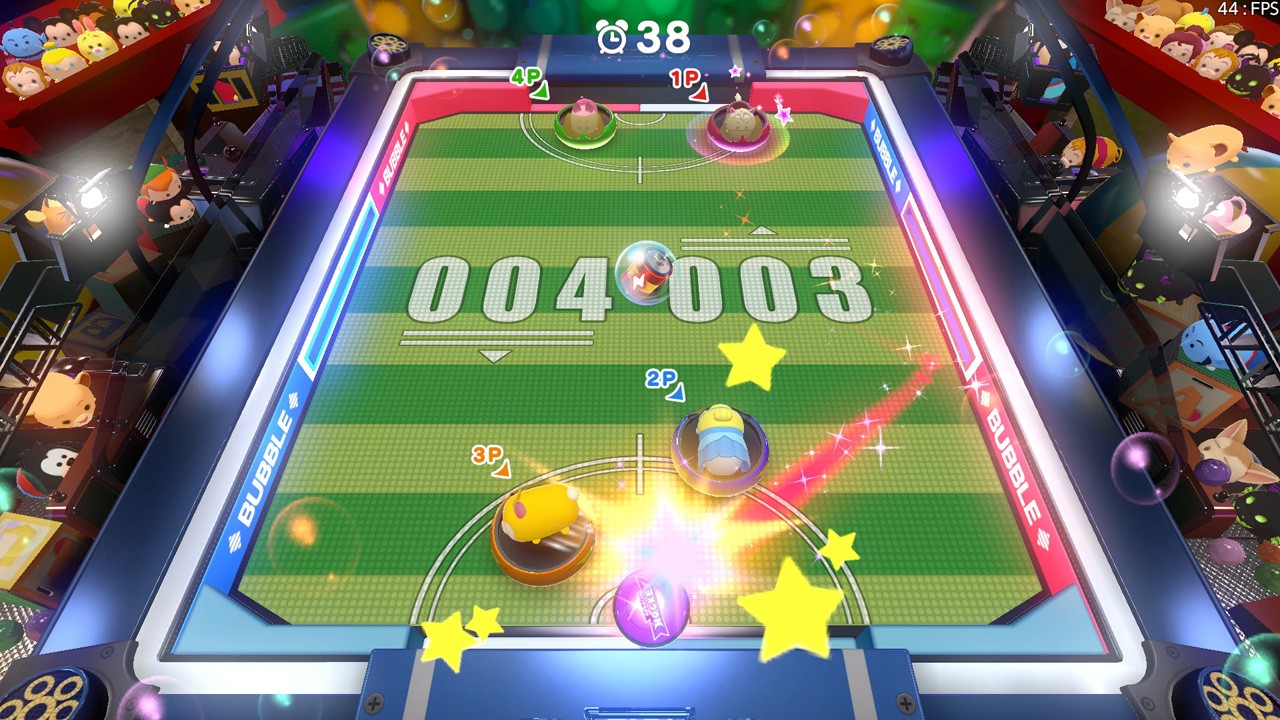 Mobile games come and go, but they really make a huge splash in the small time they’re in the spotlight. People scoff at the fact that there are TWO Angry Birds movies, but I think that we underestimate the sheer value that Rovio created when they finally stumbled upon the perfect mobile game, combining accessibility, repetitiveness and cute characters. It seems that every month brings something new into the spotlight, but Disney has become a repeat offender in the mobile game front. We’ve had Emoji Blitz, we’ve had some kind of Magic Kingdom builder simulator, and there’s some game my coworkers all play that reminds me of Toon Blast but with princesses. Still, the appeal is easy to understand: free, cute, and addicting. Disney’s original project, however, remains Tsum Tsum, the odd puzzle game that exploded into a massive collection of Beanie Baby-esque dolls that some people pepper their entire lives with. Bandai Namco saw the potential, and took a massive gamble on creating a full fledged console game with Disney’s Tsum Tsum Festival. The result? This is certainly for the right people, but it’s definitely not for everyone.

Tsum Tsum Festival is, as you might imagine, firmly centered around the titular characters, which are shrunken, cylindrical versions of almost every Disney character imaginable. This might not sound like a big deal, but you have to remember that the pantheon of Disney characters is far, far larger than you realize. WE all know Donald and Mickey, alright, but do you know the name of the step sisters in Cinderella? Or the dude that Pochahontas was supposed to marry before she met John Smith? Many fans do, and they DEMANDED that these characters get their own Tsum Tsums as well. Plus even characters with no names, like the clams from Alice in Wonderland where they did that weird Through the Looking Glass musical number. It’s like making a zoo-based game where it’s bordering on Noah’s Ark in terms of animal variety. That’s Tsum Tsum, and Disney can even add more by putting hats, costumes or just color palette swaps with the characters. So hold onto your butts, this game gets intense. 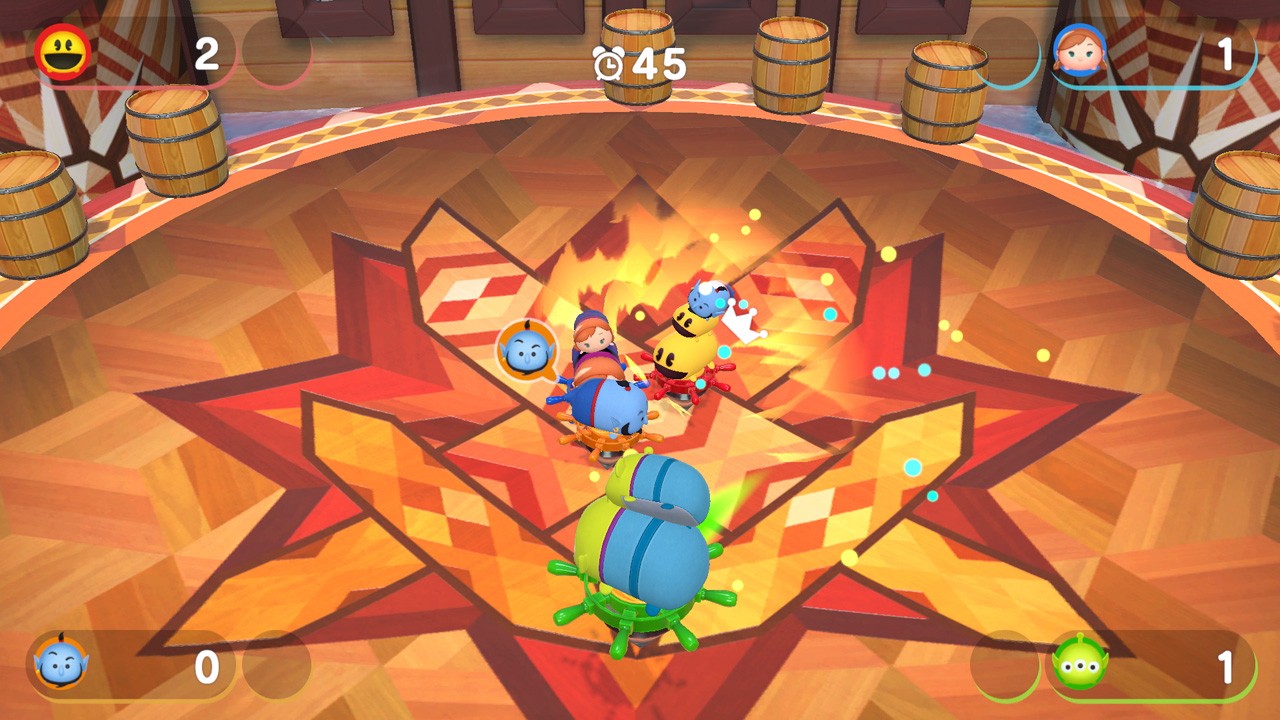 Tsum Tsum Festival is a full buffet of different mini games, both competitive and cooperative, that let you and friends/family/people online work and play together in different styles. The original Tsum Tsum game is more of a timed puzzle match that reminds me of Bust a Move but without a striker and more of a swiping motion to connect the same character bubbles. With Festival, you run a full range of activities, from a chintzy rhythm game (which requires very little rhythm) to a sort of arena brawl (that is fairly inoffensive) to my personal favorite, air hockey but with Tsum Tsums. Each game has a berth of how many people can play it. The air hockey, for example, allows for four players (two on each team) but, naturally, only two teams. There’s a sort of competitive stacking game where you need to balance Tsum Tsums as they fall in a roly poly tower, and that is four different people, making a Tumblestone attempt that’s actually pretty cute. All of the activities allow for levels of personalization in which of the Tsum Tsum you choose, so, as long as you’ve unlocked the one you want, you can rep Minnie, Stitch, Nemo, or even PacMan (hey, it’s Bandai Namco, you don’t think they’d slip their mascot in there?).

While unlocking sounds scary, you don’t need to run and hide your wallets just yet. Yes, Disney’s Tsum Tsum Festival does have some additional purchase content, but that’s all DLC to unlock additional characters that’ve been added since launch (and, frankly, immediately at launch). Not having DLC still allows you to get a MASSIVE number of Tsum Tsums, the exact number I’m unaware of at this moment. Instead, you get to win coins upon the completion of just about every game, and the coins build up to try your luck at a “Lucky Surprise Balloon” which is just a nice name for a gacha machine. This isn’t surprising, and I’m not even mad: the game gave me about eight or ten characters that I “won” the minute I started it up, and it just went from there. You get your kids to sit down for a moment, you all have a blast trying to outrun each other in a circular arena, or attack each other like Pac-Man ghosts, then you get the coins and try your hand to unlock Moana or Sully or, I don’t know, the emotion Disgust. It’s a grind, but how the hell did you not expect a bit of that? To be perfectly honest, I was expecting the threshold of unlocks to be substantially lower (10,000 coins is a big number) and I was hoping for more characters to be unlocked from the beginning. Still, because I was able to tick different boxes from the get-go (Stitch is unlocked and he’s a family favorite, plus Festival Stitch was one of my lucky gets), then we were satisfied as a familial unit. 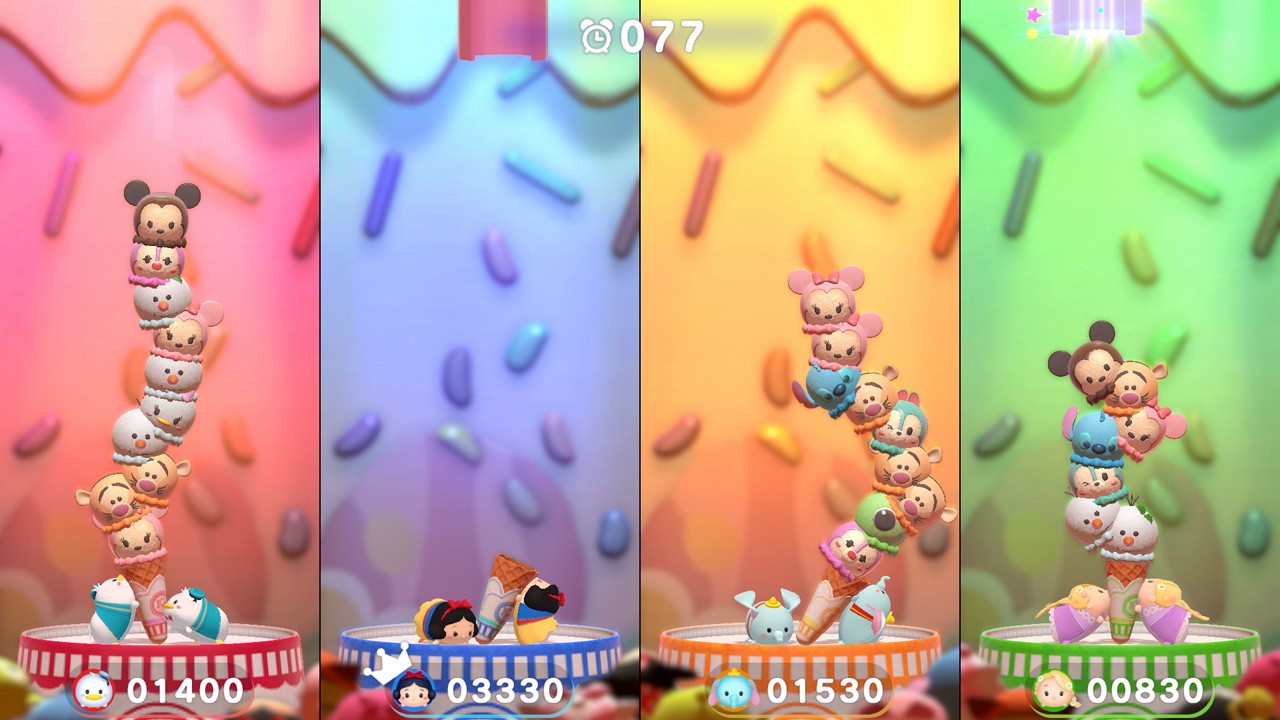 The downside, for me, is that this is a game that really, really wants and needs you to play with other people. If you’re not in docked or tabletop mode, giving a JoyCon to someone else and doing a shooting gallery or a dance party, you’re not doing anything. You’re able to do exactly one game by yourself: original Tsum Tsum. Don’t get me wrong, it performs well and stretches an itch that I’ve been feeling for a while. Since you have bought Tsum Tsum Festival, there’s no cool down or need to micro-purchase turns to play: you can just Tsum Tsum till your finger falls off. But you do need to hold the Switch vertically, which can feel odd and strange (and looks even weirder). And, as fun as Tsum Tsum is, I can just play that on my phone. You can do multiplayer Tsum Tsum locally and online, and that’s cool, but how the hell does that help me when I’m on the train and I’m taking a break from Pokémon? It doesn’t, and now I’ve got this fifty dollar game that, when I’m outside the house, I can play this free game in lieu of literally everything else the software has to offer.

But that isn’t going to dissuade a good number of the target customer base, which is people who enjoy Tsum Tsum and people with kids who love Disney. For those items, I think the game is a big win. It’s exceptionally cute, it runs very well, and the controls are quite intuitive: when all you need to do is basically hold the JoyCon sideways, move around, and occasionally push a button to make your Tsum Tsum puff up, you’re golden in teaching even your four year old how to play. There are just so many characters, and the entire gameplay is painted with sweet, repetitive music and a ton of adorable characters who all squeak and bounce around in a fashion that’s visually appealing and endearing. The game isn’t bad at all, it just isn’t going to convert anyone who hasn’t played Tsum Tsum before. If you decide to finally try this years-old mobile game as a premium priced console title, you’re completely insane.

Anyone can enjoy Tsum Tsum Festival, and I know my family is going to still love playing this as we head into the cold winter months and less desire to play outside. I just wish that I had gotten a second Switch before I bought this game: I definitely need to share with everyone now, and it can be rough.

Clearly designed for Disney fans and Tsum Tsum fanatics, this Festival is loads of fun for the target market and less appealing to anyone who despises Disney.