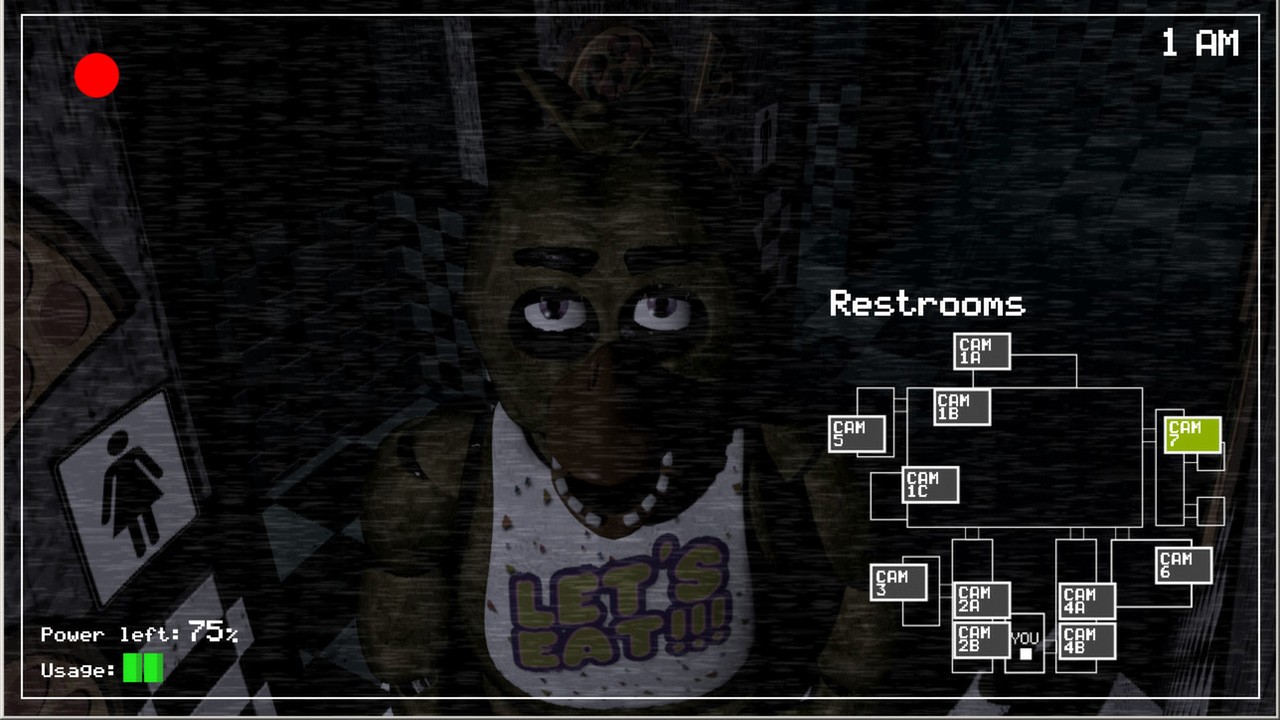 Friends, Romans, countrymen: lend me your ears! I come to praise Five Nights at Freddy’s, not to bury it. The insane fandom that cropped up around a singular game genre should not reflect nor define the experience that was created within. Though we have gone down a twisted road and come out of it confused, bewildered and at the mercy of augmented reality, the foundations upon which it was created still hold strong and true in the modern era. So let it be with Scott Cawthon, as the gaming world has said he was ambitious, and let us delve into the game that started it all, as Five Nights at Freddy’s has come, at last, to the Nintendo Switch.

It’s an interesting time for the game series to have launched. The Halloween window has long since closed, and the clones have been all over the place on the eShop, but it’s not entirely unwelcome. For what it’s worth, the core concept of Five Nights at Freddy’s still holds true – the stressful time management to prevent a jumpscare game over – and the execution has never quite been matched. This first game in the series is what really got the ball rolling, and it’s easy to see why. For those unaware, Five Nights at Freddy’s puts you in the role of a nameless employee at Freddy Fazbear’s Pizza, which is what Chuck E. Cheese would be if they relied more on robots and less on stoned teenagers in mascot costumes. You are the night watchman, who needs to keep an eye on things while the restaurant is closed, but it’s not as easy as you might think. The robots roam during the night, and you’re supposed to watch them and be extremely careful. Due to a programming error, the robots, in their nighttime mode, think you’re a robot without a costume, and will then try to stuff you, forcibly and fatally, into a robot suit. The only option is to carefully monitor where they are, listen and watch for clues as to their patterns, and survive six nights of horror to earn that paycheck and hopefully get a new job asap.

Gameplay for Five Nights at Freddy’s is easy to follow. You sit in the control room, and you can open your laptop to see the security cameras and figure out where the robots are. You can also listen for audio clues to indicate that they’re getting closer. You have a set of doorway lights that allows you to peek down either doorway where the robots may be coming from, and you can slam the doors shut for a limited amount of time to keep them out. The problem is that everything is connected to a limited power grid that will run out over time if you’re not careful. So you can’t just do what you do at home, lock the door and throw on all the lights. You need to time it out and make sure that everything is accounted for: the last thing you want is to run out of juice completely and be stuck, in the dark, with the doors wide open and murder coming for you. 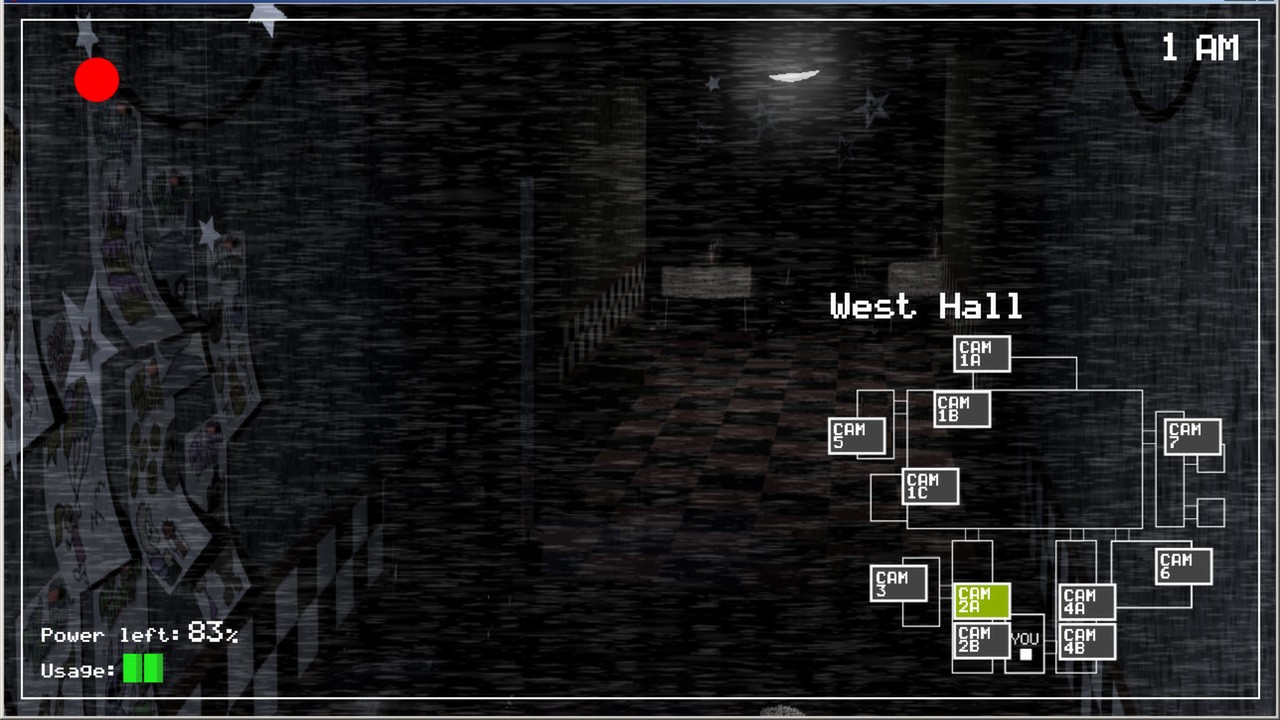 As a port, Five Nights at Freddy’s performs exceedingly well. Besides the fact that the game is relatively low impact on resources and space, the actions have been bound to buttons marvellously. You open and shut the laptop with the left shoulder button, pivot from side to side with the control stick, and open and close doors/turn the lights on and off with the A and B buttons. Honestly, I was stunned at how well it was brought over the console, since everything was pretty affixed in my mind with a mouse or touchscreen interface. I’ve now played this game on three different consoles, and the Nintendo Switch version is quite intuitive and easy to handle, and shouldn’t be a problem for anyone who enjoys the games and wants to try them anew on their shiny Nintendo Lites. If possible, I would recommend trying to install it directly to the system memory because a.) it’s quite small (less than 200 MB) and b.) it gives you just a little more boost in response time, which is important after you get past the fourth night and other robots come and join the frey.

The gameplay itself is, and has always been, about stressing out the player through careful decisions and actions, and it still holds up all these years later. One rarely knows the exact patterns of the robots from the very beginning, so you need to make several judgement calls about what to do and when to do it. Which is the more immediate danger, the left or the right door? When the cameras start to malfunction, does that mean something is certainly one room closer than you think, or are you psyching yourself out to waste precious energy? Do you think you can coast from 5 AM to 6 AM (the official quitting time) with less than 10% battery, or is another game over screen about to scare the hell out of you? People criticize the jumpscare genre of games because of how much it got run into the ground, but there’s still something primal and instinctual about it all, and it still comes across as very effective, especially in this first game. Sure, the control room is dingy and pretty grey, and the animals are arguably more terrifying due to their ugly design than anything else, but the message still gets across. Especially as you unfold additional details about the game.

Five Nights at Freddy’s eventually encompasses a huge amount of lore and fan theory, and it all starts here in the first game, where the only real information you get is between different nights from a former employee who leaves you helpful (?) and cryptic voice mails. You hear rumors about an incident in 1987 that led to the restaurant being shut down at one point. Sharp eyes will show you information about children being murdered on the premises, and, even more terrifying, the idea that ghosts inhabit the bodies of the robots. The supposed history of the games (which is only supposed at this point in time and becomes factual in the future) adds to the unsettling atmosphere, especially when you feel like you’re hallucinating between levels and don’t quite know what to do. The jumpscares are still awful (I’ve never liked them) but having something meaty around it makes it more satisfying. Why play a game that just scares you baselessly when a game could spin a wicked web of nonsense and insanity, THEN scare the bejeezus out of you? It’s a good time all over the place, even if the actual game is fairly short (especially compared to the sequels). 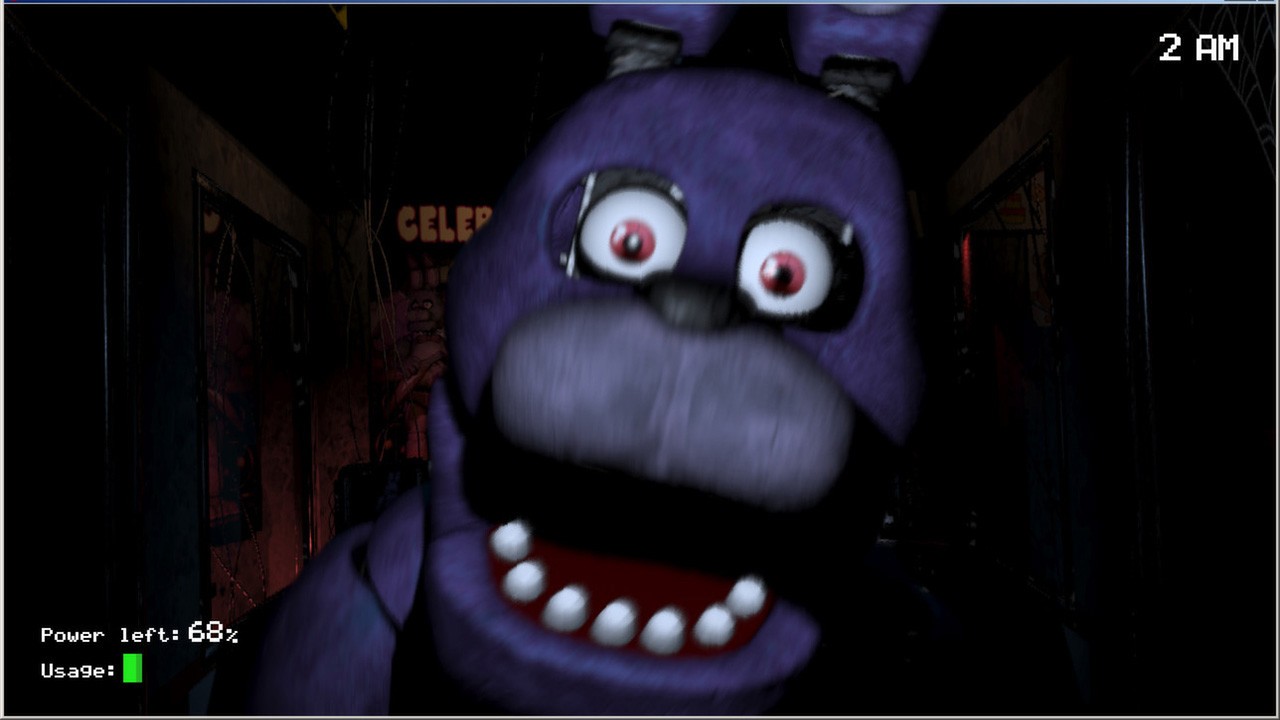 The only downsides to the game come in a twofold package. The first is that, well, this is the first game. As Five Nights at Freddy’s launched at the same price as the next three episodes, each of which is arguably more complex and incorporates a lot more gameplay. Compared to them, this first game is fairly basic (but effective!) and brings little more to the table other than the six core nights and the Custom Night mode that you can unlock after successfully surviving all the way to the end. That might be hard for newcomers to fully appreciate, let alone drop money for, so that’s a bit of a hard point to make. Additionally, the “Unlock” menu is something that feels deeply unnecessary to add. The Unlock Menu is a series of options that make the game easier, allowing for unlimited power, radar markers for where the bots are, and “shorter nights” (which boils down a night to the mobile length of 4 1⁄2 minutes instead of the console 8 1⁄2). If you toggle on all three, the game plays itself and you can just wait it out. Hell, just turning on unlimited power means you can shut the doors and call it a day. I get wanting to make the game less intimidating to newcomers, but that’s some straight up Game Genie stuff, and there doesn’t seem to be a good reason to let people just IDDQD their way to the end. Effective, sure, but less fun.

In spite of these two minor notes, the game still delivers wonderfully in today’s day and age. Five Nights at Freddy’s has the atmospheric chill, the craning of the ears to pick up on impending danger, and the sweat rolling into your eye as you desperately try to gauge your power and how far Chica is from pounding down your door. I unabashedly love this first game, and think that it’s worth a play to nearly anyone who can shake off a good scare. No one wants to have nightmares, so, if you can stomach a seriously stressful forty five minutes, you may just have to stop on by Freddy Fazbear’s: it seems they’re hiring again.

It’s the jumpscare game that every child wanted every Youtuber to play, but now it’s on the console, and, believe it or not, it’s pretty fun in the right doses.