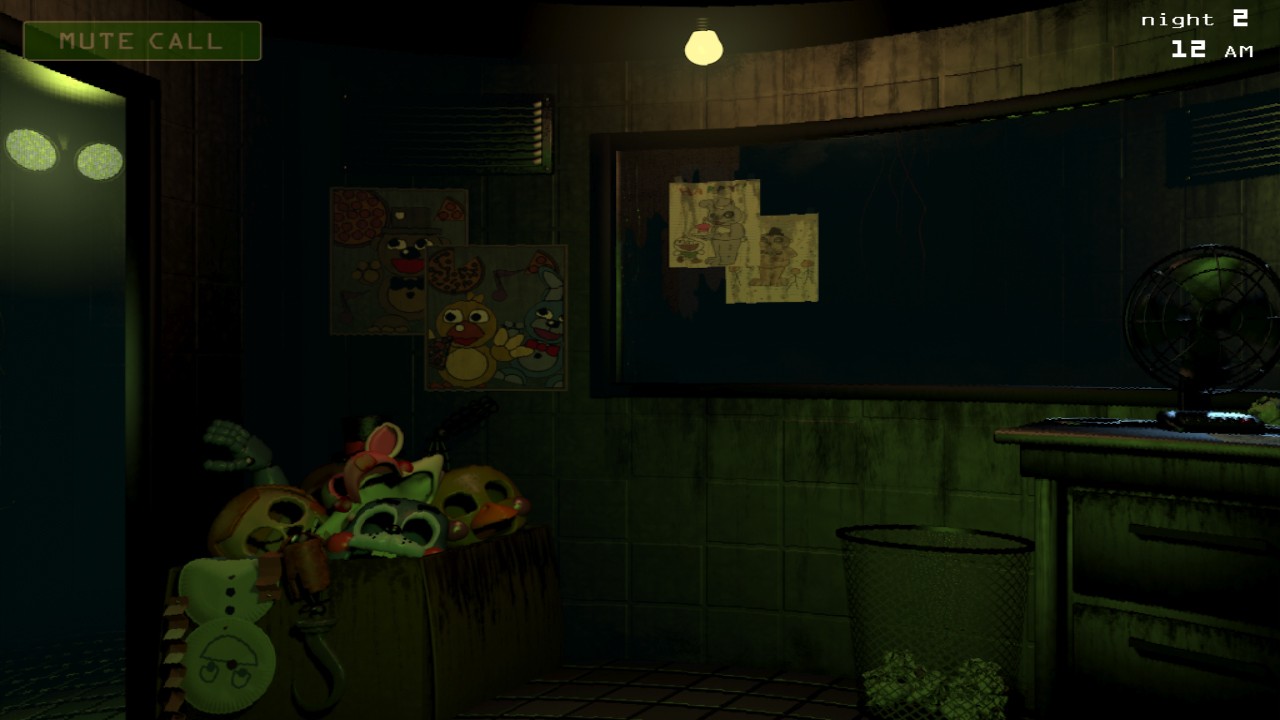 Change is something difficult to accept in a beloved concept. People were seriously displeased in the creation of New Coke, mostly because it was wholly unnecessary, and, as a result, the company had to roll back their formula and save the brand. The same thing recently happened with the Sonic the Hedgehog movie, with Paramount scrambling at the speed of sound to fix the hedgehog before the whole movie got laid to rest before release. With Scott Cawthon and his strange, frightening and somehow addicting game series, he knew that changes needed to come in order to help the game move forward. With Five Nights at Freddy’s 3, the change came in small doses, micro attempts to infuse more lore and intriguing subtext into the game, while still keeping some key elements alive. The result was somewhat interesting, but, for many, it was the beginning of a small, gradual shift in the way that the games began to present themselves.

First and foremost, the plot for this one is positively wild. We’re no longer at Freddy Fazbear’s Pizza, but, instead, at Fazbear’s Fright, a horror museum of sorts that pays homage to the dark and twisted past of the pizza chain (this is set 30 years in the future, by the way). You’ve been hired to play the role of the security monitor, which means you actually do the security monitoring job, but ironically because you haven’t been properly trained. Also, why the hell did anyone think this was a good idea? True crime enthusiasm aside, making a reenactment of a place where a bunch of kids got murdered seems overly morbid, but that’s just me. Anyways, for some reason, the makers of the place are able to find an actual animatronic from the original Fazbears and, spoiler, it’s the haunted one. Guess what, murder is coming at you on two furry feet, and you literally have no doors to close in any capacity anymore. Plus, no Unlock menu from the beginning, so buckle up for a third instalment of terror. 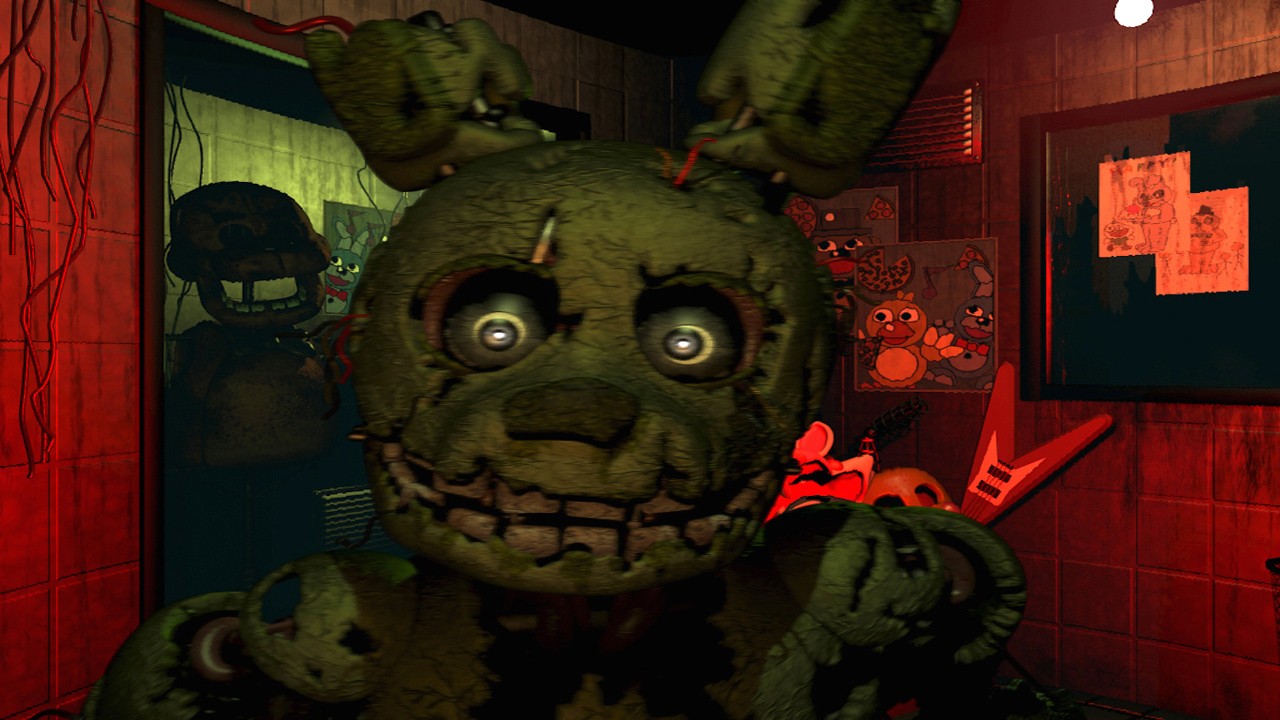 Or at least…perceptual terror. For what it’s worth, Five Nights at Freddy’s 3 does a fantastic job of properly setting up the tone and the ideas of what’ll be happening. Rather than some of the “random” bits of glitch and madness from the second game, this third game purposely starts you off with the falsely suspenseful first night where nothing happens. It gives you a chance to get to understand the controls somewhat, which are pretty complex compared to the others. You have no doors to close, so the only way to keep out the death is to either lure them away with audio signals (which are children’s voices calling, properly creepy) or to shut down the paths of the air vents as the beast comes crawling to you. However, this attraction is 100% beta, and so plenty of things break down, and need to be rebooted. Your cameras can go offline. The audio can fail to work. Worst of all, the ventilation can break, meaning you start running out of air and hallucinating. When that happens, you start to see monsters that AREN’T there, which can seriously throw you off for when the one monster actually appears. You have the ability to reboot the broken systems, but it takes time, time where you can get slaughtered by a murderous spirit inside of a toy a la Child’s Play but somehow more sinister.

Also, this game is all about making tough judgement calls. With the first two games, the security guard had plenty of options that could buy him some thinking space, such as prematurely shutting doors or throwing on the mask prior to having Freddy himself in full wander mode. Here, everything is a matter of “one wrong call and you’ve killed yourself.” You can shut off vents to keep monsters from coming, cool. You can’t reopen them till the next night, and what happens when you shut all the air vents? That’s right, NO AIR. You can’t reboot systems prematurely to try and prevent them from breaking down, and, when you’re facing the laptop screen and screaming for the cameras to hurry up and come back online, Springtrap (the one robot that menaces you) will absolutely come running up and patiently wait for you to close the screen before lunging at you. You start to realize that seeing other monsters that aren’t the demonic rabbit skeleton won’t hurt you in the game, but it doesn’t make things any easier. When you get down to the flow of things, you never fully feel safe. Like the second game, a bad call leaves zero room for error.

This time around, Five Nights at Freddy’s 3 rewards players who are perennially good at their job by giving you the 8-bit nightmares between Nights instead of when you die. Honestly, I wish Cawthon had just made a series of games with the 8-bit style instead. This telegraphs are significantly creepier and more unsettling than the normal, well rendered world that we see within the game, and the story that plays out there reminds me of the curse personality of Nanashi no Game, a haunted idea from an old Japanese DS title. These 8-bit horrors are single shot, so failure to do them correctly means that you can’t go back and do them again. If you want the “good ending,” you need to understand the objectives for each of the games, such as where to go to survive the attack against the mascots, or how to properly track down the goal before time runs out.  It was honestly a great break from the monotony of rebooting monitors and listening for my own ragged breath to indicate that the vents needed rebooting. 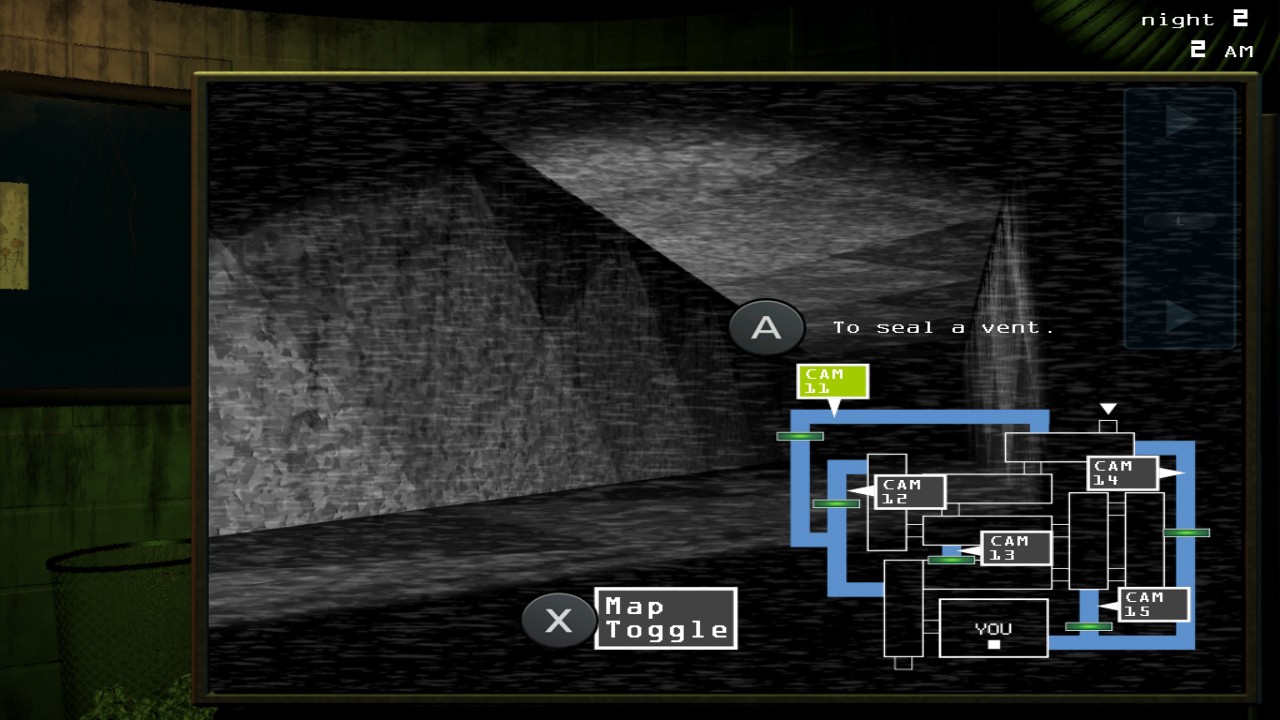 This third game is a curious case, and it’s a turning point for anyone who’s been invested in the series so far. If you’re neck deep in Freddy lore and enjoy where the twisted story of the Missing Children and William Afton are going, then this is the point where we dive, fully, towards the whole sad and sordid affair. If you were more here for the clever gameplay and tough but fair survival, this might be the last of the games that you’d want to stick around for. Five Nights at Freddy’s 3 definitely delivers on time management and the ability to keep afloat in a progressively more difficult world, but it’s also the least instructional, in my eyes, and the biggest possibility for things to go wrong. The first time I played through, I got killed on the second night and I still have no idea why. I played sounds, I had plenty of time to lead Springtrap away, and, still, he was suddenly in my office and I was dead. Worse, I wasn’t scared when it happened: I was just bothered. I was more startled when I hallucinated a Freddy a few moments earlier. When this happens, and now I’m not even getting a good jump out of it, I have to wonder if I’m here for the right reasons.

Still, it’s not a bad game, and it was good to see that the series was willing to start taking real risks to focus on the story and the characters, which is what brings back the fanbase time after time. If you’ve been here so far and want to keep going, chapter 3 of Five Nights at Freddy’s is decent, looks solid, and can deliver the appropriate amount of pressure and scariness that the series is famed for. Again, I will reiterate that this feels like the most unfair and disjointed of the series in terms of gameplay, but it’s not impossible, and it does finally move the story along, although, linear storytelling is certainly not what Freddy and Cawthon are all about.

Stronger in storytelling, weaker in gameplay, the 3rd chapter of Freddy Fazbear has some unsettling moments but getting there is sometimes more chore than play.