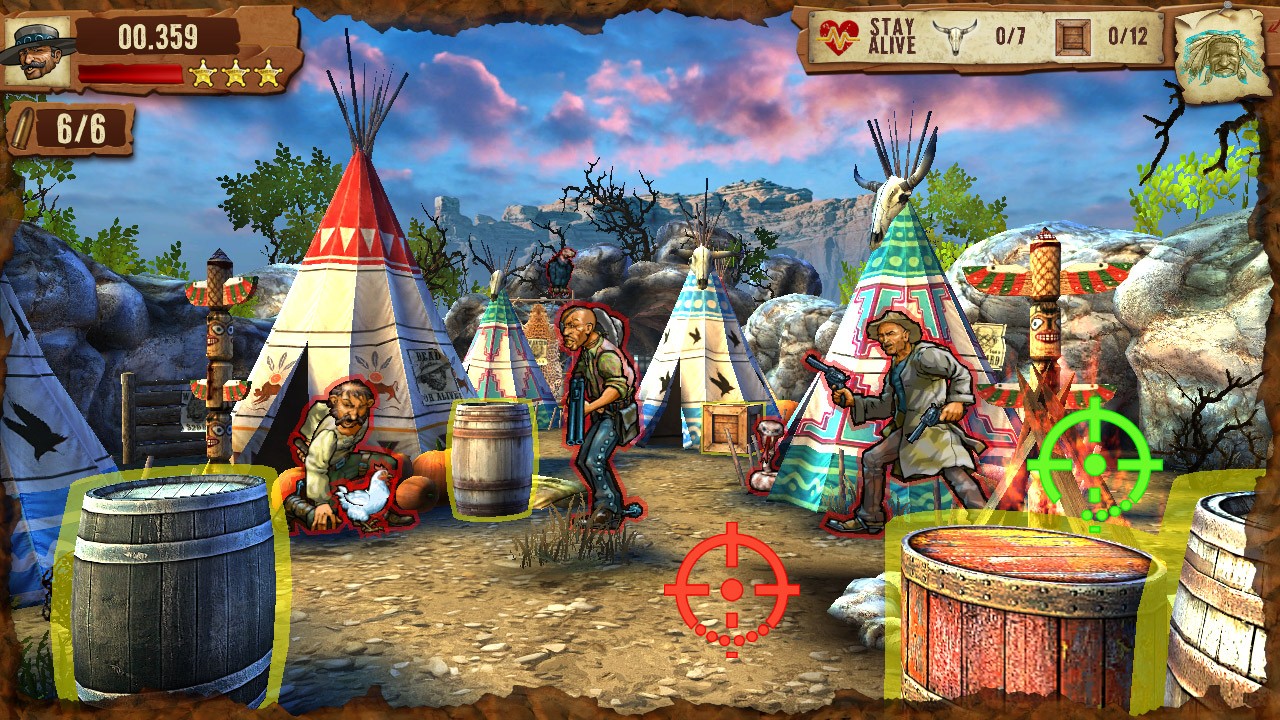 “Get off your horse and drink your milk”. That’s what you would have heard in the days of Red Dead Redemption, but for the modern world, it would be more like “step away from the keyboard and put the Café Bombón down”. I’m in the old school camp and will tell you to ‘reach for the sky’ as in Mad Bullets, someone’s gonna get shot.

Since the days of Mad Dog McCree back in the arcades, then on Sega CD, there’s never really been a decent automated western shooter. When I say ‘automated’, I mean where you don’t have direct control of your character other than the aim. Games like the Call of Juarez don’t count as it’s an FPS and you control your cowboy. Mad Bullets is an old school arcade-type in that you’ll head through town and all you need to focus on is your aim and shooting those darn varmints.

As a dusty gamer with heritage, it was quite refreshing to play Mad Bullets as it’s essentially a light gun game. I really do miss those as you can’t really replicate this type of game on a widescreen TV accurately, but the joy-con is your next best bet, and it works quite well. My review was originally going to be from playing in handheld mode, but let’s be honest here, it’s a bit of a pig aiming the joy-con on such a small screen. You can do it, but the aim goes off a lot, and you need to re-calibrate it quite often. Save yourself the time and kick out whoever has the remote for the big TV and play in docked mode.

Do we need a story? There isn’t one really as Mad Bullets is all about getting you stuck into the action. Forget about men with no names, folk looking for redemption or new sheriffs in town – this is all about shooting stuff quickly and efficiently as possible. In this case, it shines as you point the joy-con at the screen and hit ZR to fire, R to reload (it’s mirrored if you do a two-player). It’s straightforward and enjoyable too. 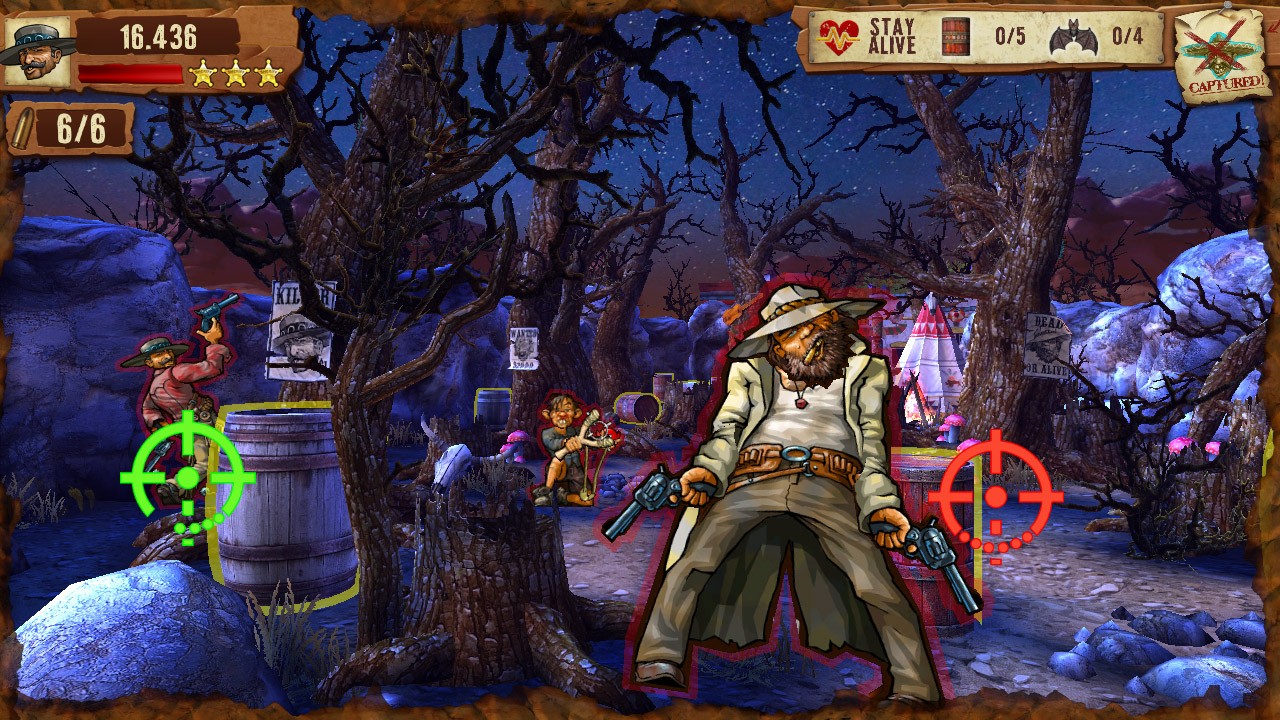 There’s no point spending time on the controls as we’ve already covered them, so let’s look at the graphics. I like them quite a bit as it’s a more traditional hand-drawn approach. There isn’t any retro pixel art, 3D models or cel shading, just static images, or cut-outs if you like, of various rogues and innocent bystanders that you aren’t supposed to shoot. The characters are slightly animated, but they are supposed to represent wooden boards – when you shoot them, they explode in fragments, and it’s pretty effective. It’s in a first-person perspective, similar to games like Lethal Enforcers where it’s like you’re on a conveyor belt, only without the duck and cover mechanic. Instead, if an enemy shoots at you, it’s best to try to shoot the slow-moving bullet out of the sky. It’s not always bullets as knives are thrown, hatchets and even skulls.

It’s not that the game is hectic in terms of tempo, but there can sometimes be quite a lot of characters on screen at one time. Because there are a lot of innocent bystanders amongst the crowd, you’ll find that they are all differentiated by a colour outline to indicate their threat level. A red line confirming who the villains are and that you need to shoot them, blue for wanted criminals and green for the people you aren’t supposed to hit. A stray bullet will inevitably hit one of the innocents – they get in the way a hell of a lot – when a bullet does connect, you’ll lose health, represented by a sheriff badge. If the kids call you ‘Eagle Eye’ then you might want to shoot the padlocks off some of these bystanders, and they’ll shower you with love hearts.

Mad Bullets isn’t a title to take too seriously. When you start, you’re shooting outlaws and the odd stray chicken, but as you progress through the 60 different levels, you’ll begin to encounter more absurd things to shoot – most of which will be objects like barrels that award you with points or helps to complete a challenge like hit so many crates or bullets out of the sky, but pretty early in the game, you’ll shoot piranhas mid-air. It’s a nice addition to add a bit more variety/challenge to the game, but the base game is enjoyable enough to warrant repeat playthroughs as it’s just so quick to get into.

There are a handful of ways you will lose health and have to restart the level. The most common is projectiles from enemies. They are usually slow enough for you to shoot them, but there are occasions where the enemy will fire multiple bullets, and you simply can’t reload fast enough. Other ways to lose health is through shooting the innocents. I must admit, a handful of times I purposely shot the odd bartender who just so happened to step out into the middle of a gunfight. Serves him right and it was worth losing health over. 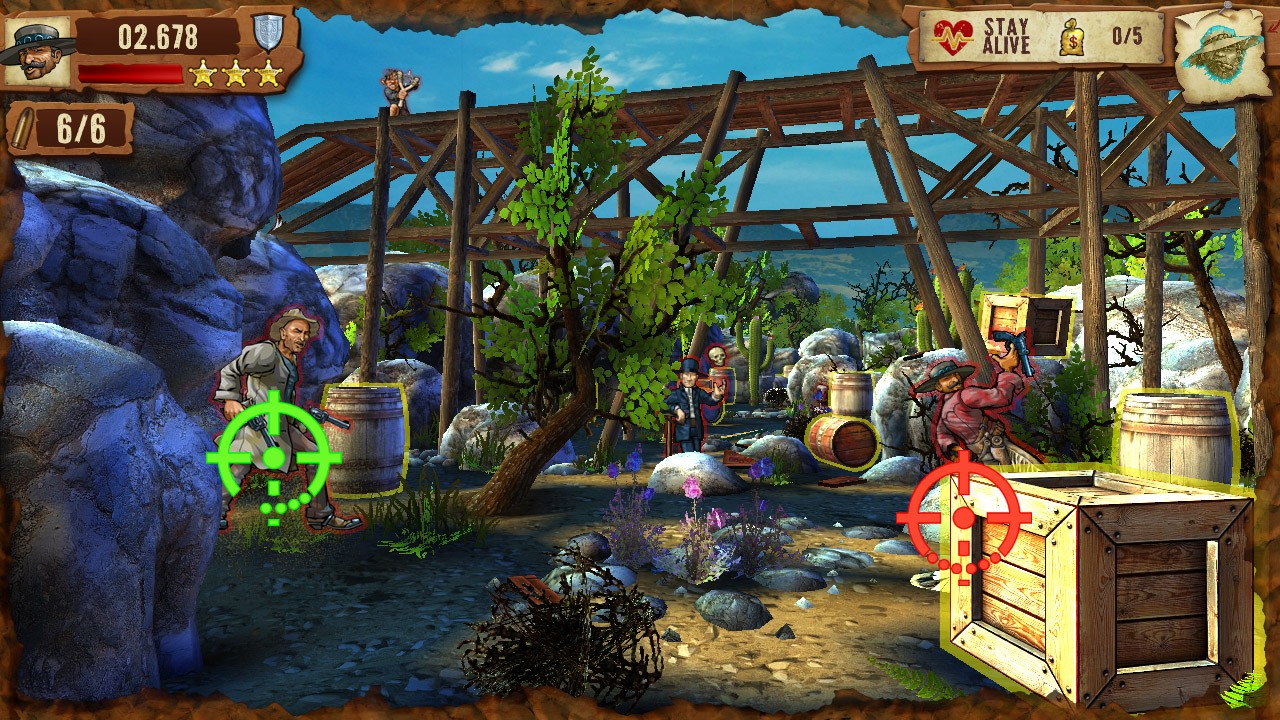 I ended up playing the bulk of my playthrough as a multiplayer. When you have another player, you can use another joy-con, and both of you can be differentiated on-screen through either a red or blue reticle. At the start of each area, you are given a challenge such as ‘don’t get hit’ or shoot x barrels. They are purely optional as you can progress regardless, but it adds a level of competitiveness with a chum. We opted for a strategy of ‘you take the left side, I’ll take the right’, but the continual bullet slipping through or your partner shooting an explosive that takes off some health means it gets a bit of a free-for-all and everyone for themselves.

Overall, Mad Bullets is a breath of fresh air and pays respect to the light gun games of yesteryear. My biggest criticism would have to be the continued calibration. There were times where my sight would go out of bounds and didn’t reflect on-screen what I was doing with the controller. The reticle would re-centre on the screen on reload, so in a way, it re-calibrated itself. My niggle with this was incoming projectiles on the far left or right of the screen as when reloading, the reticle would go back to the centre, and you’d eventually take a bullet to the face. It was a little frustrating, but not enough to put me off the game. Eventually, I found the best way to play the game was very subtle movements and not to point the joy-con as if it were a TV remote. This method worked, and I’d wager that my headshot count was as much as 90%.

One of the challenges with games on the Nintendo Switch – notably the eShop, is the volume and finding a suitable title. There are so many ports these days that it’s a job in itself to cherry-pick a good title. Moreso when you’ve never heard of them. Mad Bullets is a typical title I had never heard of, and it was only through my own ventures, that I found this title and have to say that this is one of those gems that you need to look into. We aren’t spoilt for choice with this type of game on the Switch, let alone other platforms, but regardless, this is a title definitely worth playing, and I think it takes the mantle of light gun games for me until Sega Ages attempt a House of the Dead 2 port.

There’s no time for beans and redemption. Pick up your six-shooter and blast away those desperado’s the best you can with your joy-con.

The calibration method can take a bit of time to get used to
Having a reticle on-screen gets a little confusing, even though they’re colour coordinated
Three health points/shields are a bit stingy, but you have endless continues