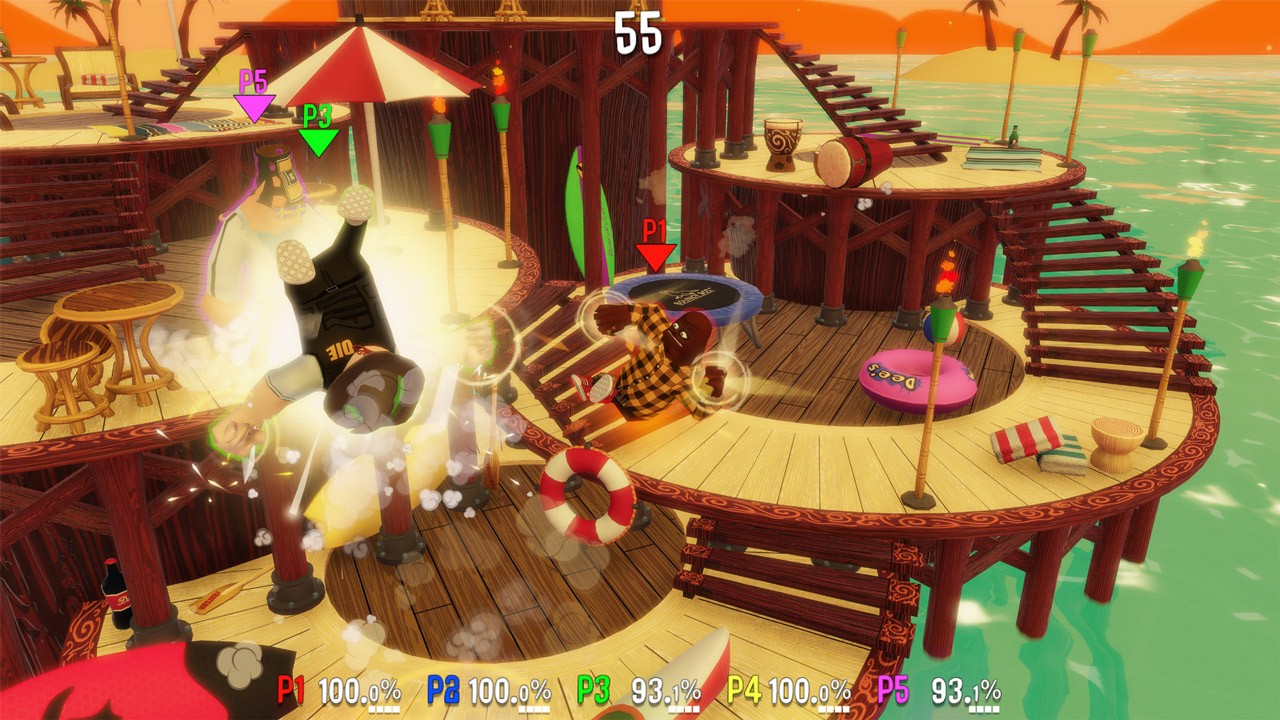 There was a time when party games were merely gimmicks to keep friends entertained for an hour or two with straightforward controls and easy to start a game. You’d pick them up and play for two consecutive weekends tops and then find yourself unlikely to come back to it. If you can handle the unpredictable aspect, games like Gang Beasts changed that perception a little, and there have been a few copies on the Switch that have been quite good and often hit the mark. Drunk-Fu: Wasted Masters has a similar approach, but will you be playing it for long?

If you’re studying for your Gaming Historian diploma, that I just made up, you might be familiar with an old Xbox game called Kung Fu Chaos. It had a retro aesthetic (as in 70s kung fu vibe) where you played rag dolls and jumped around the screen, slapping one another at any opportunity. A rough around the edges Super Smash Bros. Ultimate predecessor, if you will. Drunk-Fu: Wasted Masters is like this, with a slice of Power Stone on the side. For you gaming historians.

The frequent question I would ask when playing Drunk-Fu: Wasted Masters was “Who’s winning?”. The arena gets crazy as bodies are bouncing here there and everywhere. Winning a round is like winning the lottery as your fighter handles like a slinky. It’s unpredictable, all over the place but somewhat fun at times.

I will continue to compare this to Gang Beasts, as the titles are so similar. However, with Gang Beasts, you can at least connect a punch, even if a little sloppy. In Drunk-Fu: Wasted Masters, the characters bounce all over the place both deliberately and when you get hit. Hitting another player is awkward – even when you have a pipe or something useful. A lot of the time, I ended up jumping and spamming the ground slam attack; otherwise, I was being launched by others, only to fall to my frequent death. 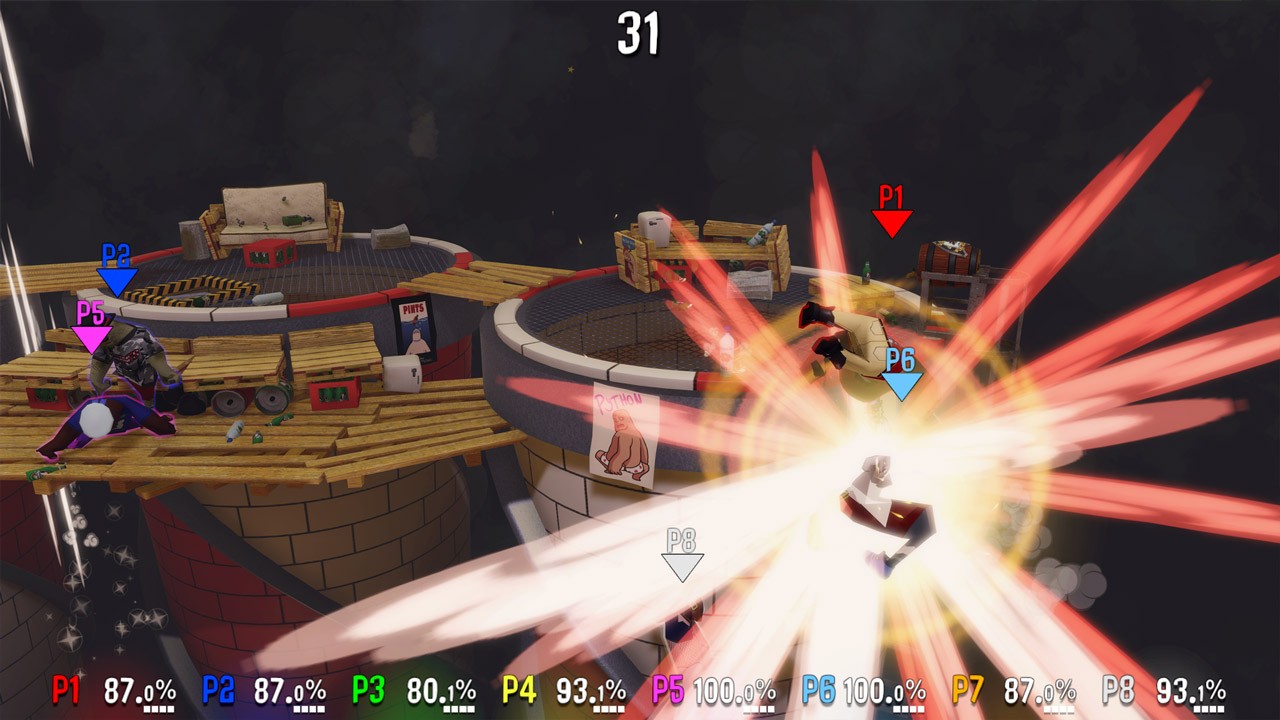 As with Super Smash Bros. Ultimate, you have to knock your opponent(s) out of the chosen arena for a ring out. Something worth noting with Drunk-Fu: Wasted Masters is you can knock the other player out, as in KO rather than a ring out. As your player takes a beating, they’ll flash red and stars will appear over their head. It’s a nice addition to a match, as aiming for ring outs can get tiresome.

There are eight stages to choose from, all with an alcohol theme (it’s in the title – these chumps are supposedly drunk all the time) and they’re well designed with a good variety of spots to take the fights to. The same applies to the number of players, as you can have up to eight players on screen at once – either real players or you can fill up with bots.

What about online play? Other than the essential local play choice, you can host or join a game that is typical of the genre. I’ll always stray away from online play as it’s not my thing, but I will play these modes for review purposes. With the Switch, you don’t have the same voice options as the PS4 for Xbox One (a good thing, I mute them anyway), but the experience is ok. In local player, it was just one other person and me, yet when I entered the online mode, there was a bit of slowdown, and half the time I didn’t know what was happening. It resorted to button mashing when the screen was overpopulated, and there was a fair amount of screen tearing also.

Drunk-Fu: Wasted Masters is arguably better as a local multiplayer. That way, you can get a feel for other players’ opinion on the game. With the online mode, it was anonymous free-for-all without any form of skill elements. ‘Bash the buttons and hope for the best’ is what I came away with when in reality, I wanted something a little more skilful. As I said, I’m not a fan of playing online so much, often preferring a ruckus with someone in the same room rather than someone on the other side spamming the quick punch button.

In total, there are four main modes to the game. Time Limited is in the name; you need to knock other players out within the allotted time. Three Lives focuses on the KO element, and you get three lives (spotting a pattern with the titles?). King of the Keg is the last man standing option that is point-based. You need to stand around the keg for as long as possible to accrue points. This was my favourite of the modes by far as it relied a little more on tactics. 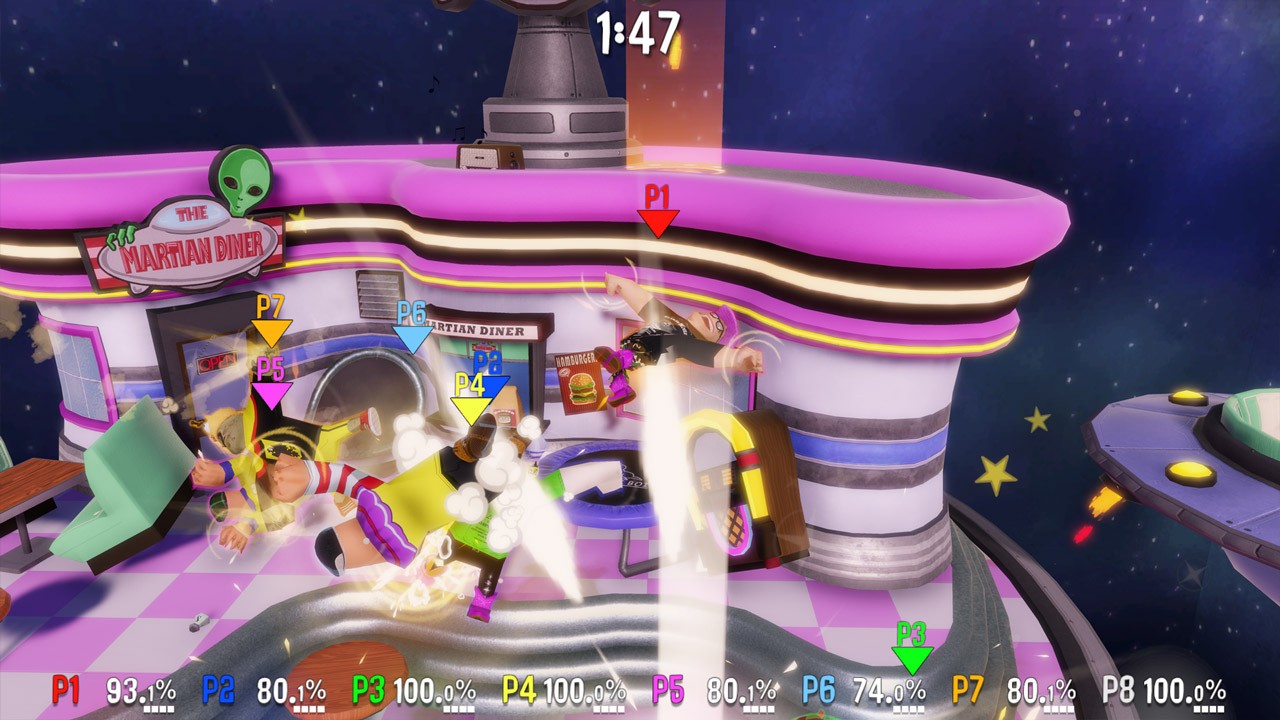 Finally, the last mode is called Swarm AI. Here you have waves of AI enemies that attack you, and you need to knock them out. A highlight of this mode is that you can team up with friends, so the co-op element makes it much more enjoyable when you work together instead of spam an attack button and hope for the best. You get points for a knockout but lose one if you get knocked off.

Having an option to customise characters is always a plus from my perspective. While there aren’t as many as the 100+ variations on a similar party game I recently reviewed, Headsnatchers, Drunk-Fu: Wasted Masters does have a broad selection to make your character stand out. Options include changing their clothing, skin and a handful of accessories. The characters are relatively small on-screen, so you don’t get to see them in all their glory, but being able to tweak your fighter just enough to be able to differentiate them from the others is something I wholeheartedly recommend.

While the levels are the selling point for the visuals, the camera angles are the low point. Sometimes literally. Due to the ragdoll element, there are far too many occasions where the camera will focus on random parts of the fighting zone. Anyone unfortunate enough to already be in the air, may swiftly find themselves off-camera and heading out of the arena. Because there are times when you are in the air more than on the floor, these changes in focal points can cost you a round or two as you don’t know where you are.

The music is a mixed bag. Sometimes it will sound like a pop-rock soundtrack from a teen drama, then it’ll switch to a (much welcome) heavy metal riff. By default, the music was almost inaudible, so I turned it up, and it had a good tempo to it, which is ideal for this sort of fisticuffs. As for the sound effects, they were a standard affair. There was potential for annoying voices for thuds, but I didn’t hear any.

Drunk-Fu: Wasted Masters is a party game, in my opinion, more than a beat ’em up as it doesn’t require much skill to play. Ideally for casual gamers – as in non-gamers or younger players or when you’ve got your friends over for a session, and you want something non-taxing and a bit of fun. While Drunk-Fu: Wasted Masters has the edge with the KO function, I still prefer Gang Beasts over the two, more so because of the grappling action/sticky mechanics and dare I say, stability. Speaking of stability, other than the erratic physics, there were two separate occasions where Drunk-Fu: Wasted Masters crashed on me. One during customisation and the second mid-fight in an online match. It happens, but it didn’t do it any favours.

Drunk-Fu: Wasted Masters is an above-average party game if you can get past the physics, but there is slowdown with online play. It’s fun in small doses, but be mindful that there isn’t much skill involved.