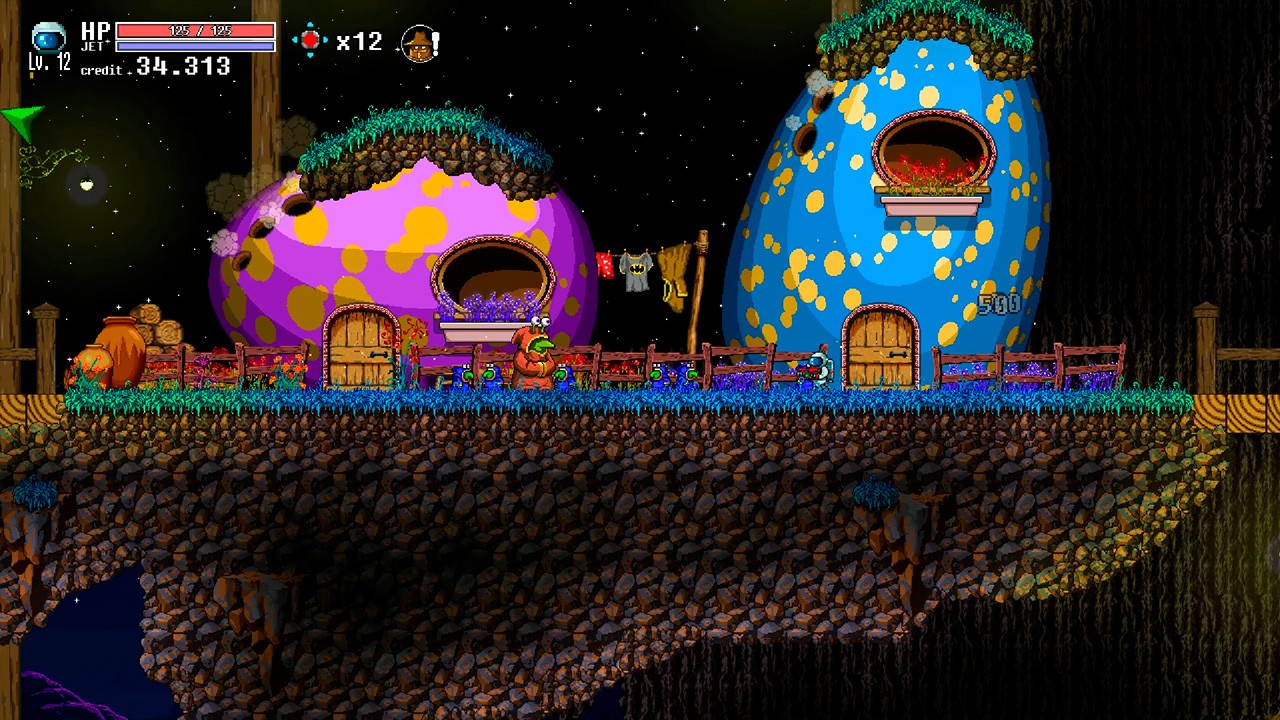 Willy Jetman, a fun metrodivania style pixel platformer that was fun to play, embarrassingly funny (as in I was doing it too much on public transport) and had an old school feel that some of the more contemporary pixel platformers are lacking in exchange for fancy mechanics and unique art styles.

You are Willy Jetman, a space trashman monkey (a job I very much looked into before journalism) who, alongside his sarcastic and often scathing spaceship computer Gladys, dodged a copyright there didn’t we lads, are tasked with clearing up trash across the galaxy after a spaceship explosion; leaving Willy to clean up after it and travel across different planets, which all have a host of enemies that Willy must fight to keep his efficient cleanup operation in full swing.

This game has one mode, a campaign and I don’t think it needed anything else. I think adding in any sort of minigame such as a ‘collect them all’ or as some games have done in the past, a speed mode, would overly dilute a very solid glass of pixelated squash.

Willy Jetman has a pleasing art style, in a similar vein to other old school platformers such as Metal Slug or the retro Castlevania titles. I’m a sucker for almost any pixel art game and this one has a blend of the comical/cartoony side of games such as Terraria or Starbound; a style I have been craving after recent platformer titles such as Hollow Knight, which don’t get me wrong, is beautiful but I love playing a game that could have been released over 3 decades ago. 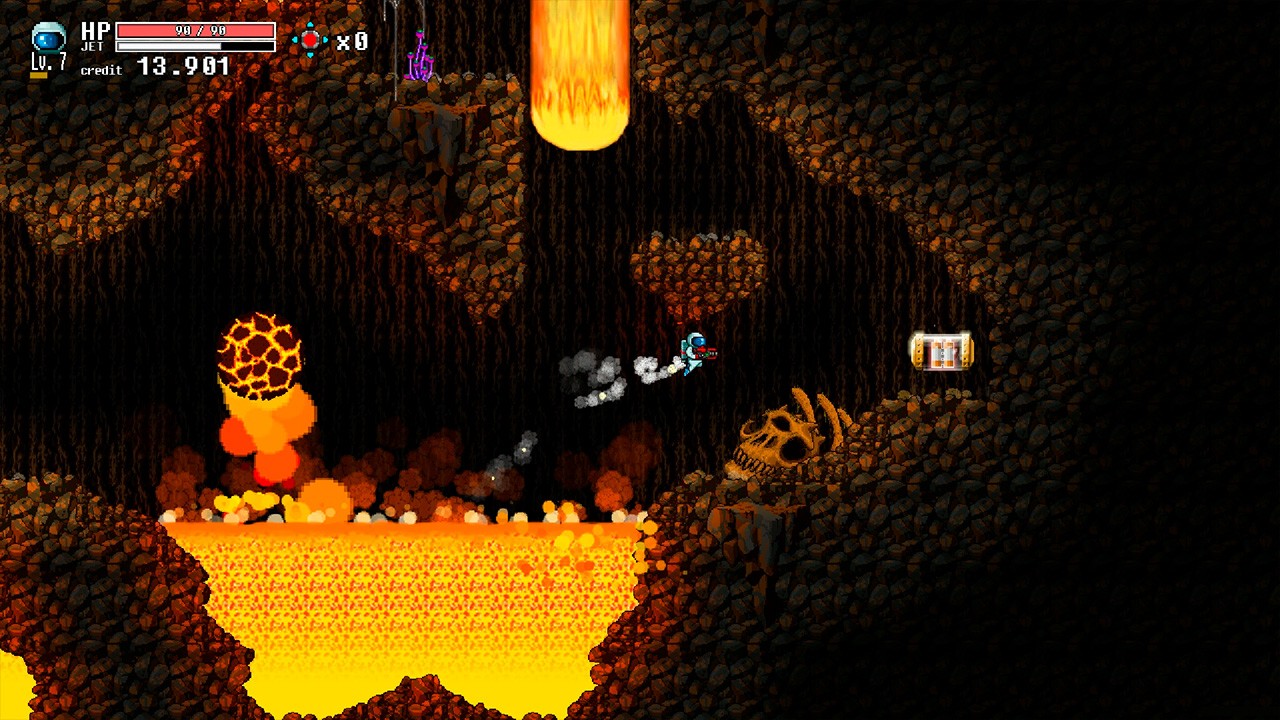 This game was funny, really funny and in a very childish way, which I am not ashamed to say that I am. One quote stands out “My Willy how did you ever get so big and strong”. I was on a train surrounded by toddlers and it was me that was the most immature when I giggled at this. I like to consider myself to be a bit of a comedy snob and enjoy highbrow humour more so than human bodily functions or crass innuendos, but I do as much as consider it, I love childish humour. The game’s opening scene sets up the whole ethos of the rest of the player experience and if you don’t audibly laugh then you might as well put down your Switch and go read Crime and Punishment by Dostoevsky, a highly intellectual book that I imagine is only read now to prove that a monkey in space who makes a lot of toilet jokes is not funny to the reader. Boring.

The soundtrack is okay, it doesn’t prick up my ears and impart a feeling of musical excitement that I would be happy to listen to as a separate entity, unlike the scores in games like Hotline Miami or Faster Than Light; no joke I have some of the music from those games in my workout playlist. The music is fun and matches the aesthetic of the game, but it does little more than that.

Controls in pixel platformers are often a skill that, in the beginning, take time to master and become fluid with, especially when engaging a daunting boss battle. This game does exactly the same, but there was never a point I felt that I was any better than at the start of the game; no need for ‘mastery’, yeah I got used to knowing that the directional pad is better than the control stick, but that was about it and that was a peer assessment. The controls could have been a bigger part of the game if they had more fluid and modular style. I like old style games but I wanted to be a bit more of a show off when fighting the space dragons and the hooded slugs. 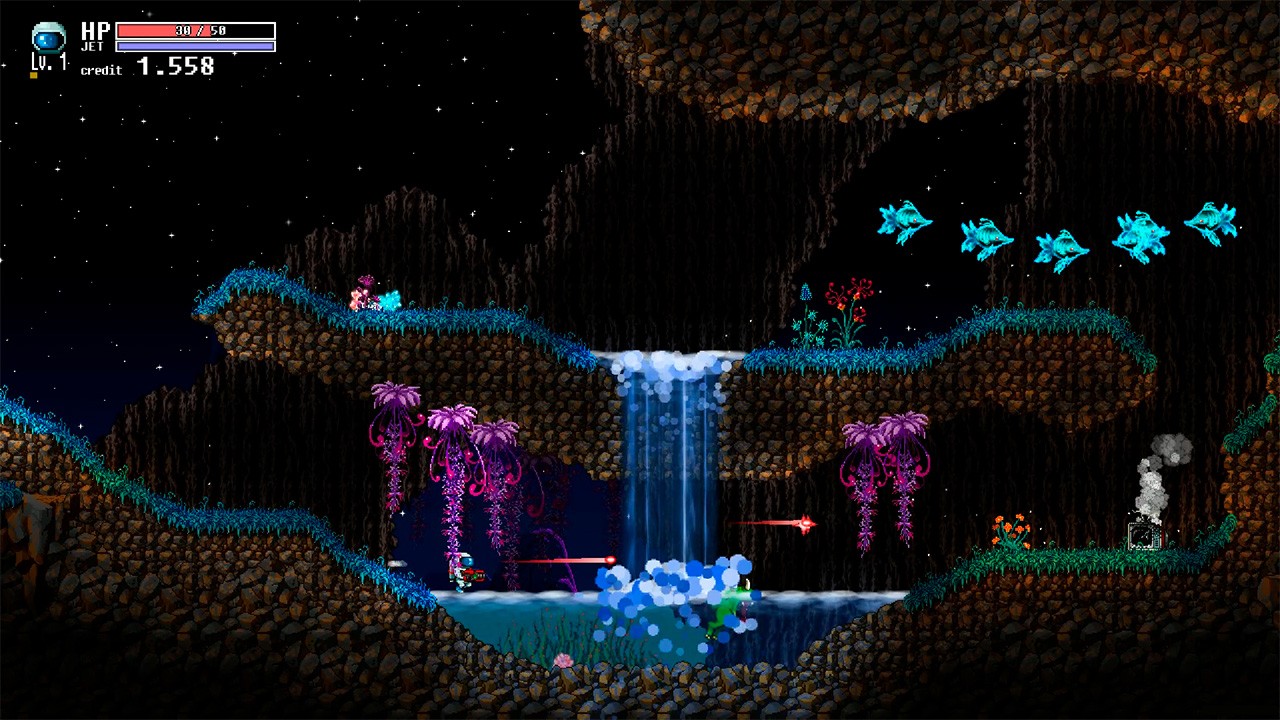 The difficulty was as expected and that is not a bad thing. Some pixel platformers, *cough cough*, I’m looking to you Risk Of Rain, can have staggeringly brutal difficulties that in the end become more of a frustration than a challenge. Willy Jetman throws you in at the deep end, but once you grasp the controls the game gives enough of a challenge that you do want to try again should you fail.

Jetman it is a pretty standard aim and fire shooter with a weapon progression system utilised through the in-game merchants and it had a very funny dialogue throughout, something that can go a miss in newer games especially when they try too hard. It was a fun and old school and as a 22 year old who grew up playing Sega Megadrive and SNES games given to me by my brother, it gave me that kick of nostalgia; a game with the mechanics and graphics of the late 1980s, but that is entirely forgivable in 2020 with it’s big selling point being just how funny it was…to me anyway.

A game with the mechanics and graphics of the late 1980s but that is entirely forgivable in 2020 with it’s big selling point being just how funny it was…to me anyway.

Jamie Kay no longer writes for Bonus Stage. We would like to thank him for contributing 2 Reviews during his trial period with us. Reviewers are an essential part of Bonus Stage and therefore we sincerely appreciate all contributions from reviewers/writers who in-turn help to contribute to Bonus Stage's success. We wish him every success with his next venture.