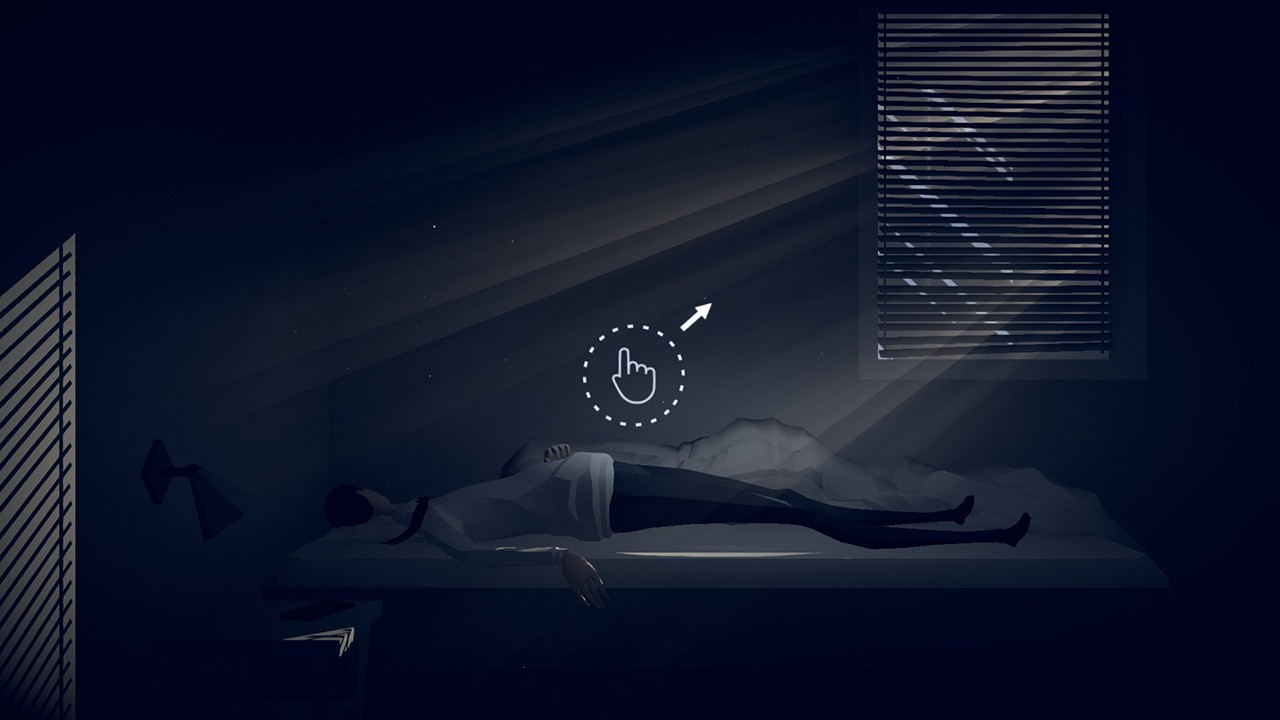 City living can be one of the most isolated experiences for some, even though there is an abundance of social activities to do, diversity is at its best and more people in a train carriage than you’ll ever encounter in the countryside. Why then is it so lonely? Mosaic highlights those moments in time, with hints of breaking out of the monotony with a vibrancy that mirrors the 9-5 palette of grey.

Not much is known about the premise as the narrative is very much show, not tell. This resonates through the controls; there’s no guidance with tooltips or an annoying avatar that gives you a running commentary on how to hold an analogue stick or illustrates the fundamentals of moving a character around the screen. It’s about finding yourself and exploring your surroundings. There’s an underlying theme of free will in Mosaic, and while in principle the game is a linear one, the paths of thought are endless.

Waking, his mobile phone alarm abruptly, the protagonist sits on the side of the bed and goes through the messages and news feed on his phone. Once past that stage, it’s time to get up and ready for work, brushing his teeth, straightening his tie and putting one step forward in the world of the commute. When at work, complete a task or two, then return home, go to sleep and do it all again. It’s a familiar cry for most, but the day is broken up by fiddling about with his phone and some strange abstract moments. Think when Neo first becomes aware of The Matrix – is there more to his life? 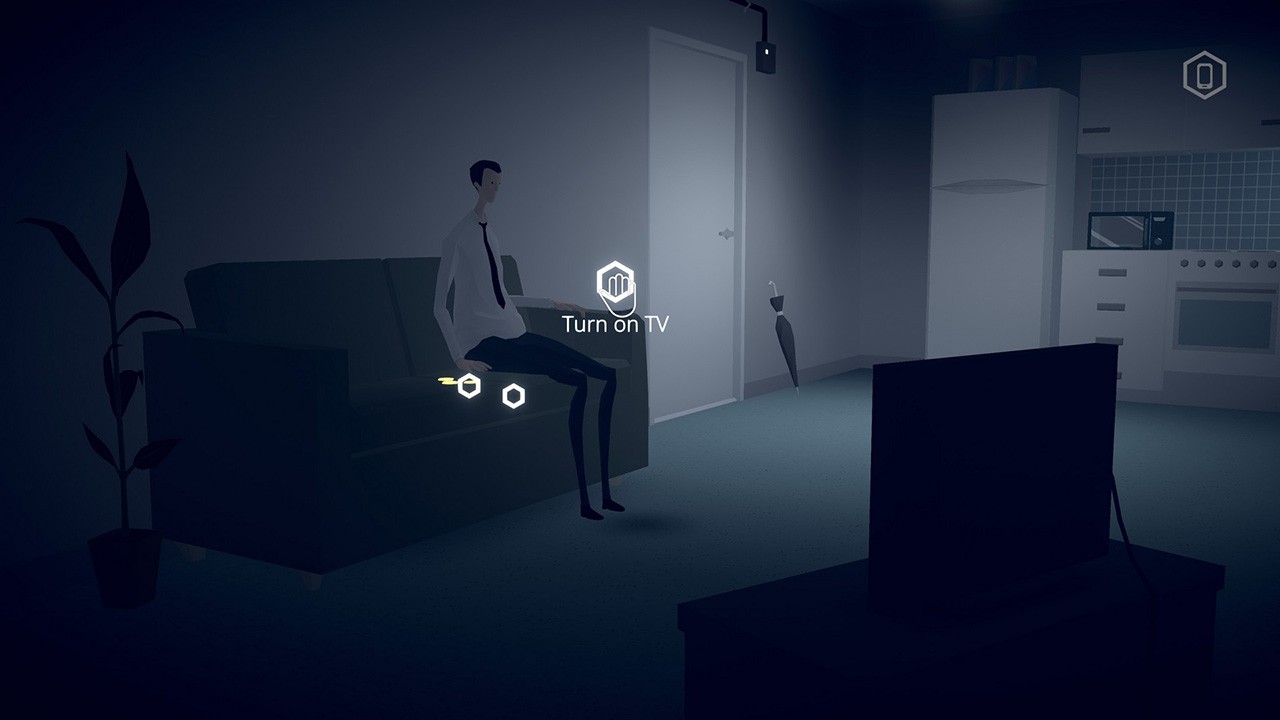 That’s the principle here on display; the routine of everyday life, and despite going about the same procedure, seeing the same people, there is zero connection made with the outer world and the only comfort is in his phone and a talking goldfish. Yep, you read that correctly, but in fear of giving any spoilers, we’ll stop right there. The goldfish does put things into perspective of what to (or not to) expect. Our nameless ‘hero’ is on a path to self-discovery and attempting to identify their purpose in an over-populated space.

The thing is, he does stand out. All the other characters, except some buskers encountered, are faceless and completely uniform in their design. Stand out, and you’ll likely be hammered back into to place or worse, ignored. He is the latter; when in the lift, move the analogue stick to look at the person to your left then right and they look away. Whether it’s a personal thing or merely a case that nobody wants to connect is debatable. The emphasis though is he is lonely, but getting up day in, day out to do his job because he has to.

There aren’t many gameplay mechanics as such as it is mostly limited exploration, sometimes in a dreamlike manner that is often uplifting. He seems to notice things that maybe everyone else has been ignoring, or perhaps it’s because only he can see it. There aren’t any game overs or items to pick up to combine, and most of the time you will be moving from one screen to the next with the occasional point of interest to interact with, represented by the A button. It’s not remotely difficult in the slightest as the focus is on storytelling and the general ambience.

One frequent section is the actual playable part of your job. Coincidentally, this is the only area that is explained on how to play. Your job is to meet a milestone in an unidentifiable task, and this is done by connecting a series of nodes, causing a flow of square bits of data to complete the objective. This is the only real puzzle element of the game, and it’s an absolute breeze and won’t have you stumped, just asking the question: why? Much like the Mosaic’s observation on life – why do we do these things? 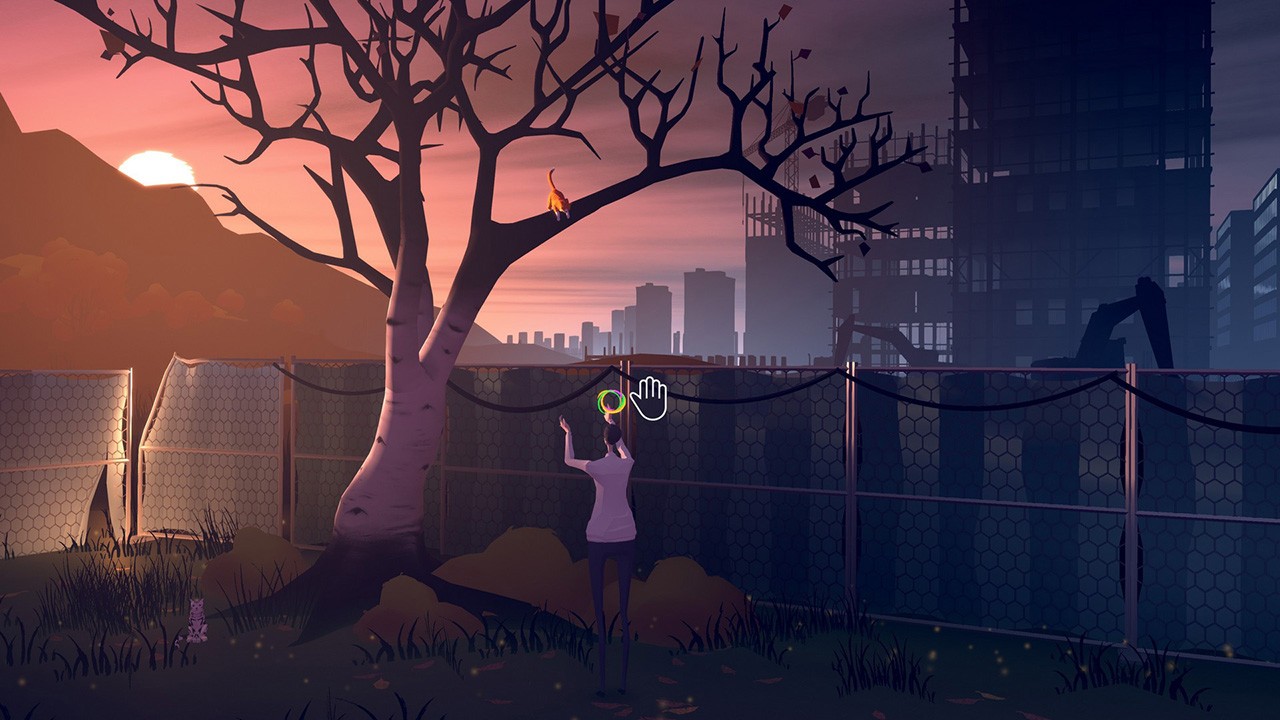 Arguably the standout element that reflects modern lives is the mobile phone and the pointless apps we have on them. We even know that they are a waste of time, yet still, exercise hour after to hour of finger tapping or swiping to ‘kill time’. With the superfluous news articles that you think are dumb from the start, you still read them. Notwithstanding the number of ‘polite reminders’ from your employer that state that continued lateness for work will result in dismissal, you always end up doing the same thing over and over.

The included dating app was a brief spell as it seemed as superficial as its real-life counterparts. The app that had me at ‘hello’ was BlipBlop – a clicker game with no purpose than to click away and build upon multipliers. As a Switch game, there aren’t any achievements to unlock or even bragging rights as there’s no skill involved. Why is it that I spent so much time on it? Was it the completionist in me hoping for a new item or status to unlock or was it because I was killing time? I’m not entirely sure, but it certainly wasn’t for the lack of wanting to play Mosaic – I absolutely loved it, even if it is super short and lacks a lot of interactivity.

If you are motivated by a subtle narrative that is open to interpretation that features gorgeous visuals and a fantastic blend of greys with vibrant, warm spectrums to counter them, then this is an experience I highly recommend. It’s not the conventional point and click adventure. There are no inventory menus, no real puzzles to serve and also no present challenge. There are a handful of dialogue choices available that don’t impact the game, but why is it so compelling and I feel so absorbed in the monotony that it reflects. Life imitating art and vice versa perhaps?

A stunning presentation on the confines of everyday life and the dullness of being in a rut. There are plenty of open-ended questions to ask yourself, but if you want something a bit more literal and dynamic, Mosaic isn’t for you. If you like ambiguity and a meaningful experience that makes you question your life, then it’s a thumbs up from me.