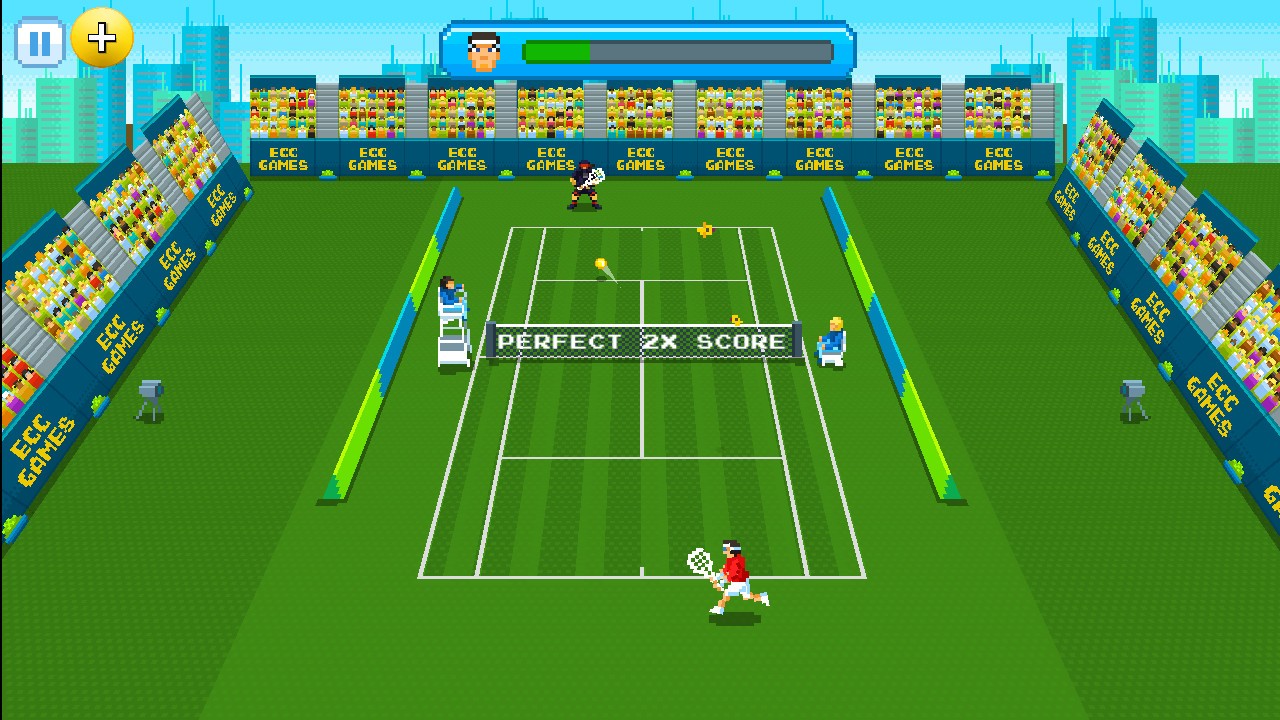 Unlike the Super Tennis game from the days of the Super Nintendo, nor a playground for Superman or Captain Marvel to battle it out on astro turf, Super Tennis, out now on the Nintendo eShop was a bit of a surprise. A pleasant one at that.

On first inspection, it looked like any other tennis game, and while I don’t dislike the game, I’m not a follower of the sport, nor do I like to play it in real life. I’m more of a badminton person, which coincidentally, doesn’t port well over to the world of gaming. Anyhow, Super Tennis is precisely that: tennis, but is it super? It’s debatable, but what I will say is it is a lot of fun. Doesn’t have the same ring to it though; A Lot Of Fun Tennis.

My first surprise was that Super Tennis plays nothing like a typical game of tennis. The only comparable elements other than the title is that there there’s a net, two players, rackets and a ball, and you could say the courts are the same as well, but no ball boys/girls. With regard to the scoring system of love this, love that, deuce and advantage – nothing. The way you win a game here is all about QTE.

QTE (Quick Time Event) was a style of gameplay that was mainly a cop-out for some game developers back in the olden days as they didn’t need to create extra animation of further programming. The screen will flash up with a button to press, and pending you do that in time, you complete the task. It’s like the Dragon’s Lair Trilogy, or something more recent, Shenmue 3. 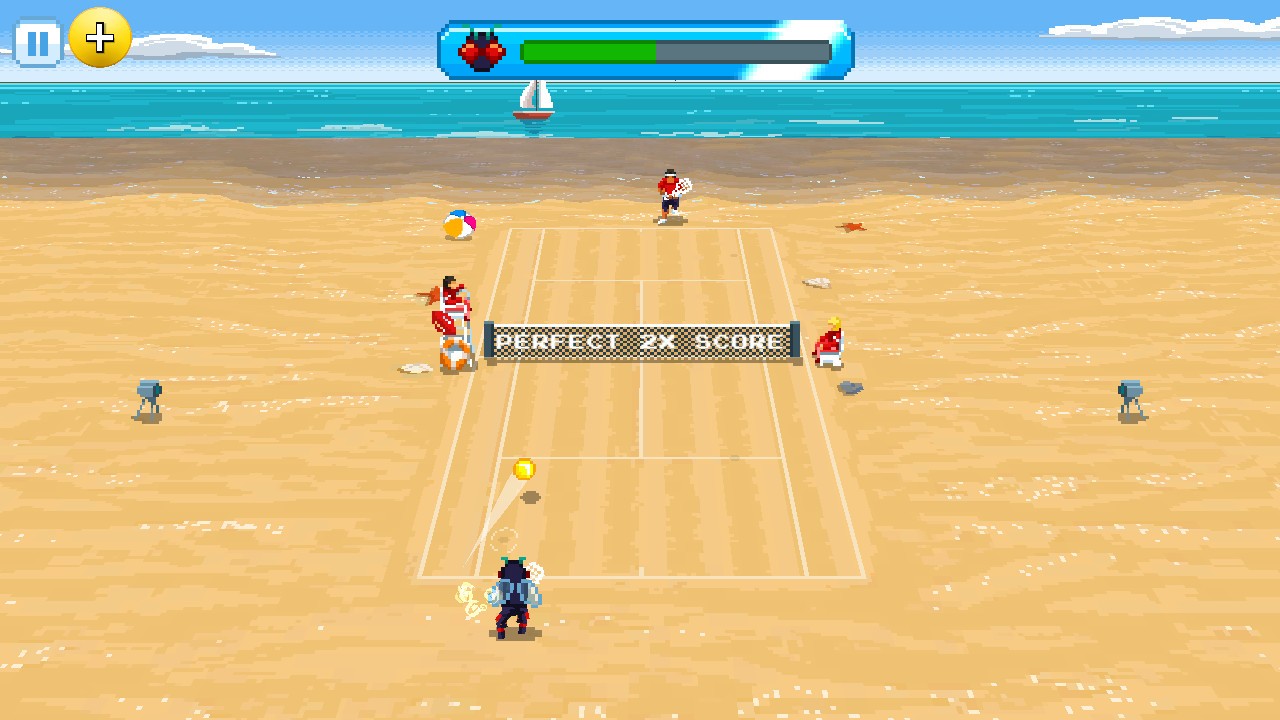 You don’t serve in Super Tennis (at least, I don’t remember noticing!), so you’re on the receiving end for every game. The computer opponent will fire a serve at you and you respond by pressing the buttons in order i.e. left of the d-pad, ZL, Y. As long as you complete the combo before the ball goes out of play and you don’t make a mistake, you will return the shot. This fills a gauge at the top of the screen that shows your progress to the next round. If you do it correctly, you’ll get a perfect and double the amount will fill up the gauge.

When I first played, I thought I had to time my button presses for where the ball bounces, but the skinny is, press them as fast as you can. Now, this sounds like it’s a very dull game as there aren’t any sets, you play one game and move up to the next, and that’s it. However, it’s super fun – a simple process that is surprisingly addictive, plus you get lots of unlockables, which I will mention in a moment.

Each section is made up of a season. You play a city in each that comprises of four or five players with a ‘boss’ to win against. It’s like a knockout tournament as if you make a mistake or don’t return the ball in time, it will result in a defeat, and you have to restart the competition. At first, this won’t happen but when I went to the next stages in the UK then the USA, I’d get to the final person and lose, starting the tournament again. You can save the game though at any opportunity, and this costs 50 credits. For every game and tournament you win, you unlock a new character and money that allows you to buy more players.

So let’s get back to those unlockables. Super Tennis has quite possibly the biggest line up of players I’ve seen. Not people like Henman, Murray or Sampras, but characters such as Beetlejuice, Snake Pliskin and Pamela Anderson to name a few. They are a play on their names, but it’s clear who they are modelled on. Some are won by completing tournaments, others you purchase. My first niggle though is every time you win a tournament; your character will change to the last one you won. If you have a favourite character, you have to select them each time manually, and there isn’t a hotkey or an option to ‘bookmark’ them. Not a massive issue, but annoying. 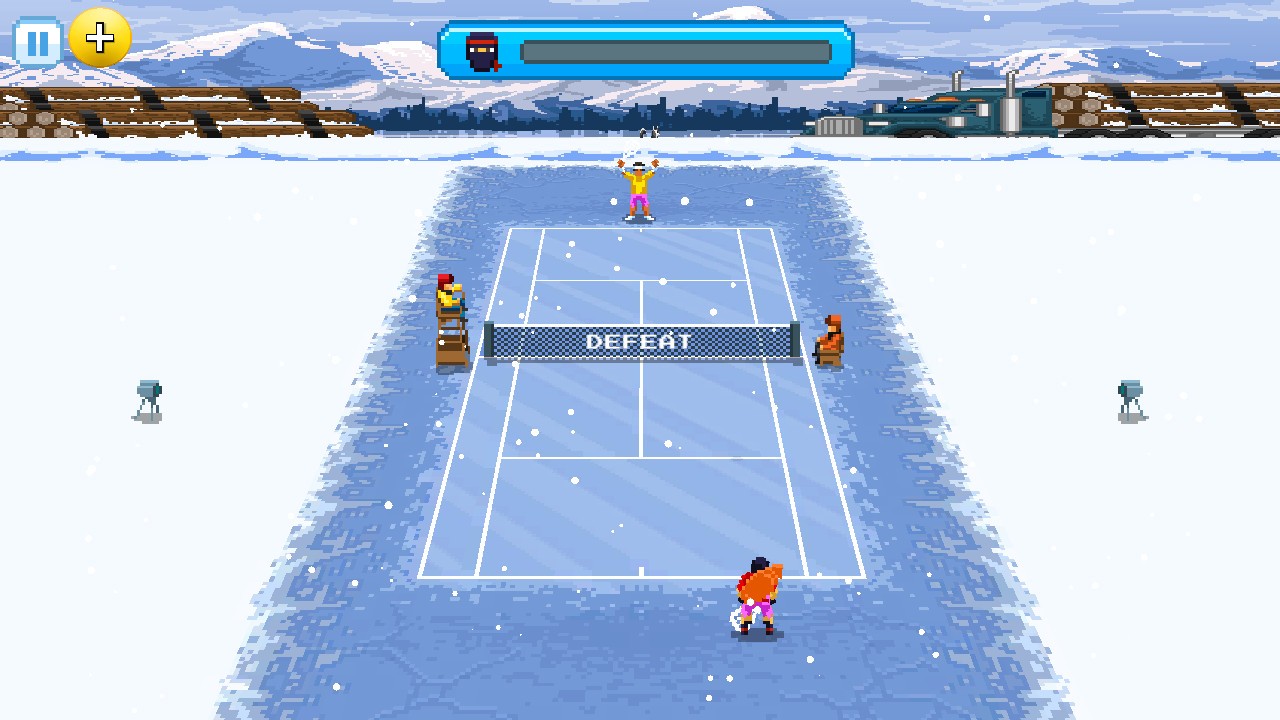 When it comes to presentation, it’s all ok. The graphics are block pixel-type characters, and while they won’t blow you away, they’re detailed enough to work out who is who. The sound effects are as exciting as tennis can be, but the commentator? Aarrghhh!!! It’s so incredibly repetitive. Practically every game he will say that the contender (you) is likely to win it, or it’s the best game he’s ever seen and so on and so on. It got so repetitive that I had to mute it as it had no meaning after the 100th time. When I say, ‘100th’ time is because I have played Super Tennis quite excessively.

The controls make good use of the joy-cons or pro controller as you will use the shoulder buttons, X, Y, B, A and the d-pad buttons. Initial games only have a sequence of two or three buttons to press, but then they increase, the weather changes so you can’t see the ball and the serves speed up. As you can unlock a new character for every tournament or whether you had consecutive perfects returns, I banked all my money and only used it to purchase one or two characters or to pay the 50 credits to save my game (you’ll need it). While it’s repetitive, there are lots of cities to play per season, and it just gets more and more challenging, yet still enjoyable. There’s also an online leaderboard to play where you can attempt to climb the ranks.

I have to say as a non-tennis fan, this is one of the best games I’ve played in the genre. Maybe because it’s nothing like the actual game – the scoring differs, and you also have zero control over your player (the analogue sticks are only used for the menus). At first, I thought the gameplay model of a QTE was a cop-out, but it’s equally enjoyable and addictive. When I’ve posted this, I’m going to jump on it once more.

A simple gaming mechanic, but surprisingly fun and addictive. The amount of tournaments you can play and unlockable characters offers a lot of repeat value, but the core is the QTE style of play.