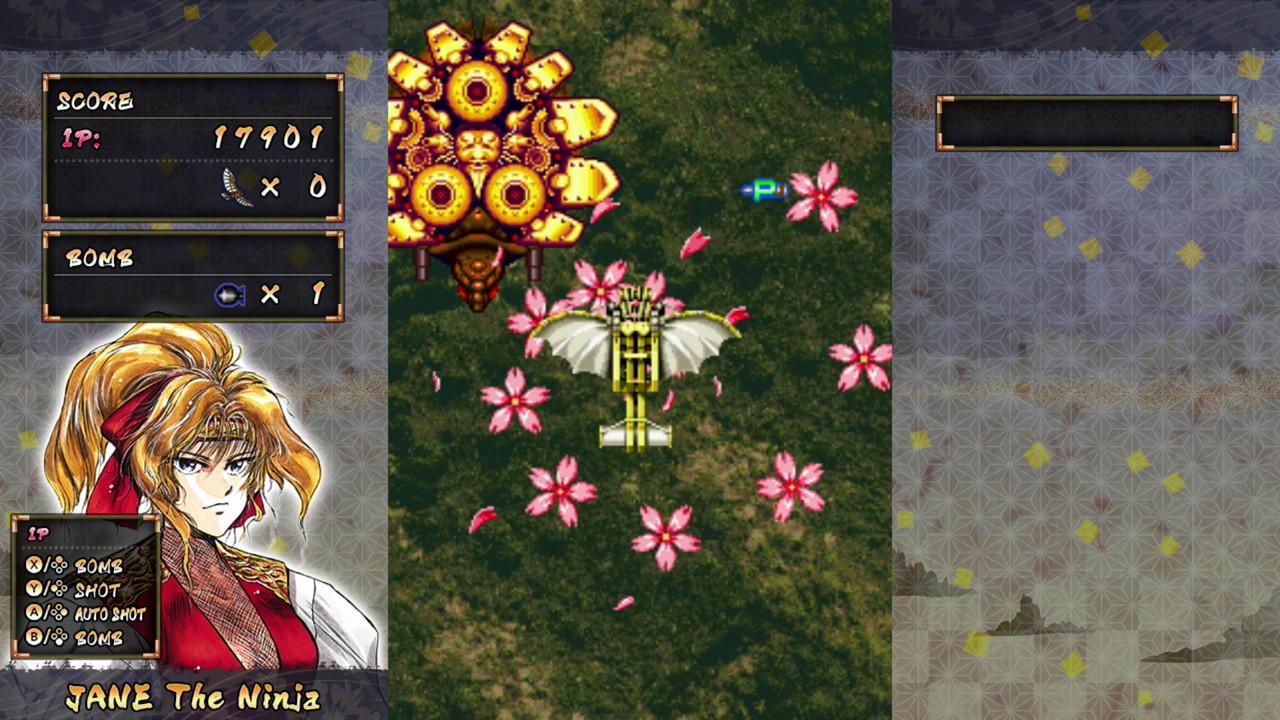 I’m enjoying this new trend from NIS America to better use their ownership of the Psikyo brands. Arguably, one might want to pick and choose certain games from the catalog to own individually, but that does create a problem. For one, you gotta have a clutter of icons on your homescreen if you’re an avid collector. Secondly, it can get expensive: at eight dollars a pop (which is an insane value compared to their launch prices), getting all the Psikyo shooters can rack up a bit of debt. But the Shooting Stars Alpha collection proved to be an extremely competent and well chosen set (if somewhat lacking in the frills that Konami showed previously), and I think we’ll keep going with that sort of setup and mentality. Here’s the second archive, the Psikyo Shooting Stars: Bravo.

This time around, Psikyo/NIS America is focusing on two specific series: the Samurai Aces set and the Gunbird/Gunbarich games. It’s a bit of an odd situation, as a result, since I’ve reviewed both the first Samurai Ace title on the Switch before, as well as the Gunbarich puzzle shooter that shows up in this collection. Given that there are no additional parts to these games within the collection, I’ll lightly touch upon them here, but it’ll be quite redundant: Samurai Aces is still a fantastic alt-world vertical shooter, and Gunbarich is still a fun (if strange) take on the brickbreaker sort of arcade game. The other four titles, however, carry their own points of interest, so I’ll be sure to take a proper swing at them,

Firstly, we have Samurai Aces II: TENGAI, a direct sequel to the original game. TENGAI takes several massive changes into account for this second game, and fans may or may not enjoy them based on how they liked the first one. Gone are the jets and planes from the first Samurai Aces, now replaced with flying versions of the heroes themselves. So far, not a problem, a bit goofy but otherwise good. Next, the game is done in a horizontal style instead of vertical. This really presents a double dilemma, because it looks and plays better on the Switch in the natural mode, but there isn’t the option to do the orientation swap and play in a “true” arcade style. To be honest, I prefer a lot of the shooters to be horizontal (it’s a lot easier now with a Switch Lite), but I think Samurai Ace did really well with a classic vertical format that we then adjusted to. No biggie, but it’s still my prerogative. 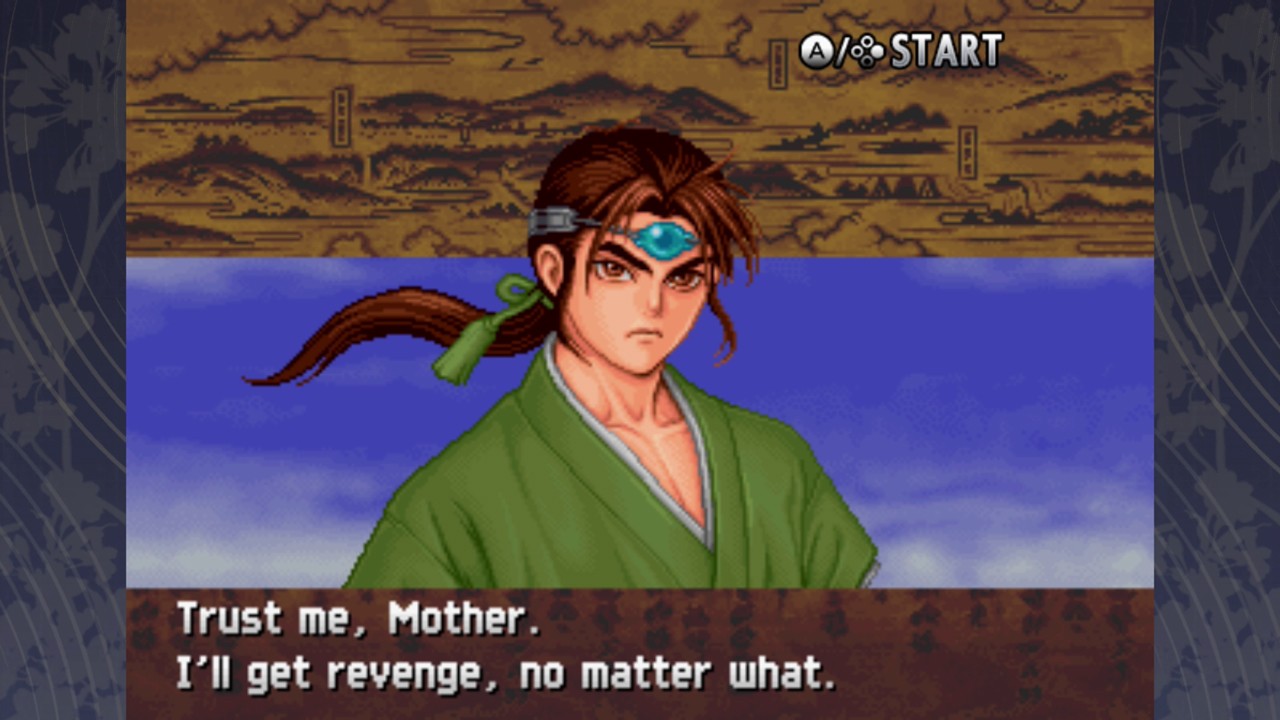 The core elements remain true, which is the most important part. Just as Samurai Ace embraced a funky version of the Sengoku/modern Japan with some surrealist combinations of technology and history, we see more of that in Tengai. The air is full of both fighter jets and giant kabuki players, hurling shuriken in tandem with bullets. Massive submarines attack before transforming into giant turtle robots, trying to bite you with extending heads and shooting energy shots and your hero dodges about, unleashing a barrage of energy projectiles as well as the occasional onslaught of katana blades, fully marrying the past and present in a well orchestrated performance of anger and fury. All of these while still keeping true with the Psikyo ideology of microfine dodging in higher levels of difficulty, weaving through blankets of bullets and trying to stay alive. It’s a bit longer than the first Samurai Aces as well, giving plenty of replay value through the five characters available (though I always come back to Junis, if I’m being honest).

The third Samurai Aces title (subtitled Sengoku Cannon) leans more heavily into the aesthetics of the second game, and, frankly, is my least favorite game on here. Created years after the others, Sengoku Cannon was originally a horizontal shooter for the PSP, and it shows in some of the aesthetics and presentation. The game certainly looks better than the others, with more detailed avatars for the players to use, stronger background images, and even a more powerful soundtrack, fully utilizing the strength that was possible with the PSP. The camera is more dynamic, giving a sort of flowing, energized field as you track your character through different stages and realms, and there’s even a better variety in the levels. Things unfold differently depending on which character you start with, though you always get some great, if corny, dialogue to remind you of where things are going and how you’re trying to take down the evil warlord who’s manipulating the puppet king or something to that effect. Alright, it’s not a perfect dramatic play, but it gets the point across.

However, in porting to the PSP, certain things are lost. Gone are the seven difficulty settings that Psikyo is famous for, now boiled down (initially) to just easy or normal. You’ve got this multi-levelled attack thing to worry about, where you’ve got your standard rapid attack, the ranged blast attack and the bomb attack, making three buttons that are weirdly mapped to worry about. I don’t like that the blast attack and the regular attack are the polar opposite buttons from each other and the bomb is in the middle, because that causes more room for error with shooting and accidentally discharging a bomb. Also, the choice to make it so that you get hit and lose a life instead of getting hit and dropping your power first is a strange one, because it simultaneously makes the game more punishing (one hit and you drop) while easier (respawn at the same power level you died at). Also, the more animated and dynamic background makes it easier to get confused and lose track of enemies on the screen, so my death rate was far higher on this game than the other two, even at “easy” difficulty.

It’s really cool to see Sengoku Cannon, though, since the Sony handhelds never really got the attention they needed in the West. Most of the shmup players may have not even realized there was a third game in the series (the Wikipedia page for Samurai Aces certainly didn’t know), so, in context of archive and memory, I’m glad this game is here. Also, it gives hope that we might see other PSP ports make their way to the Switch and bring over some of the smaller Japanese games that didn’t get nearly enough play back upon launch. I was happy to find and to try this game, and I don’t really want to revisit it again. 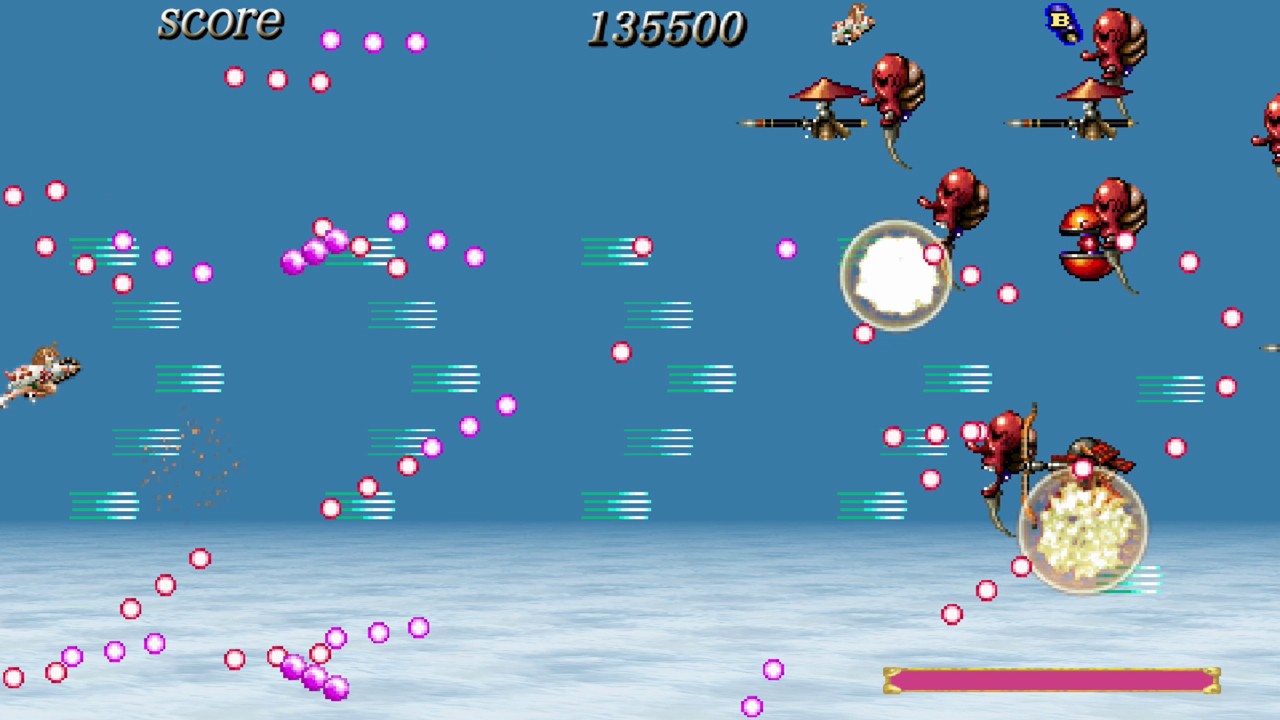 It’s bizarre that the only title I’ve played in the Gunbird series is the Gunbarich title, since it’s nothing like the other two. Gunbird I and II are vertical shmups that come very close to scratching the Touhou itch without quite getting there. In both games (and I’m lumping them together because they’re INCREDIBLY similar), you get to choose one of five interesting characters, with each game giving a different cast with the only overlap being Marion, the witch who is the series mascot. The first game gives you access to weirdos like a Rocketeer knockoff, Old Man with DaVinci Helicopter, and SonGoku (from Journey to the West) but he’s a she. The second one is Giant Robot Made of China, Dracula for Some Reason and Girl With Glasses and Jetpack. I write out these descriptors instead of their actual names because that’s funnier to me and because it gives you an idea of the eclectic mix of heroes and heroines you have to choose from in these games where the plot is “Someone set out for an adventure, and they found it!”

The games, as you might realize, are vertical shooters with gradual powerups, seven levels of difficulty and bomb attacks that create massive chaos. Each of the fighters have different styles (Marion’s carries between the first and second game) that increases with powerups. Things like homing stars, massive missiles, circling clusters of explosives and more are at your disposal while you dodge and weave between bullets that would destroy you. You’re not getting anything that’s reinventing the wheel with the Gunbird games: there’s no graze counter, no time mechanics, nothing that hadn’t already been done a bunch of times in other shmups by this point. But the success comes from the presentation and performance. The first Gunbird, oddly, seemed to have better graphics for the talking heads and also character design for the playable characters within the games. I don’t know why, but it’s almost like they took a small step backwards in designing the avatars for Gunbird II to balance out better backgrounds. The first Gunbird has murkier land designs, like things were existing in a polluted environment, whereas the second is brighter and cleaner, in a “we saved the world once, let’s do it again” sort of atmosphere.  Each is equally challenging, though you get one extra character in the first (but you get Tavia in the second).

Seeing the Gunbird games reminds me that sometimes you don’t need to be a brand new, fresh and crazy idea to get success and fame in the video game world. Sometimes you just need to have a core idea that you follow all the way through and make it pop with a big bang that satisfies the customer in the best way. It’s an interesting contrast to have the Samurai Aces trilogy and the Gunbird/Gunbarich games on the same collection. With Aces, you see the series mutate into something totally different from start to finish with a clear cohesion between, even if I didn’t totally love it. With Gunbarich, it’s such a wild swing from the first two (again, Arkanoid with cute witches) that you blink twice and then shrug: at least the title is different.  But it’s still in the family, so it deserves to be here. Still, with Gunbird I and II being so similar, it’s a wonder they didn’t try the formula for a third time. Maybe the audience was tired? I dunno, I loved it and would have happily played a third.

In any case, this is a great win for danmaku fans who are trying to get all their games into one place and, even better, grabbing physical copies to horde and keep safe in the years to come. Let’s be honest, our PS1s and Dreamcasts are finally suffering some wear and tear from decades of play, and fresh versions of the classics are good to keep and to show off in the preservation of how the genre evolved. For anyone who needs to move leaps forward, the Psikyo Shooting Stars Bravo set is where things get fun and funky for the company, and you would do well to enjoy it yourself.

Some of Psikyo’s more honored and oddest shooters gather around to be an eclectic collection for the shooter fans far and wide.