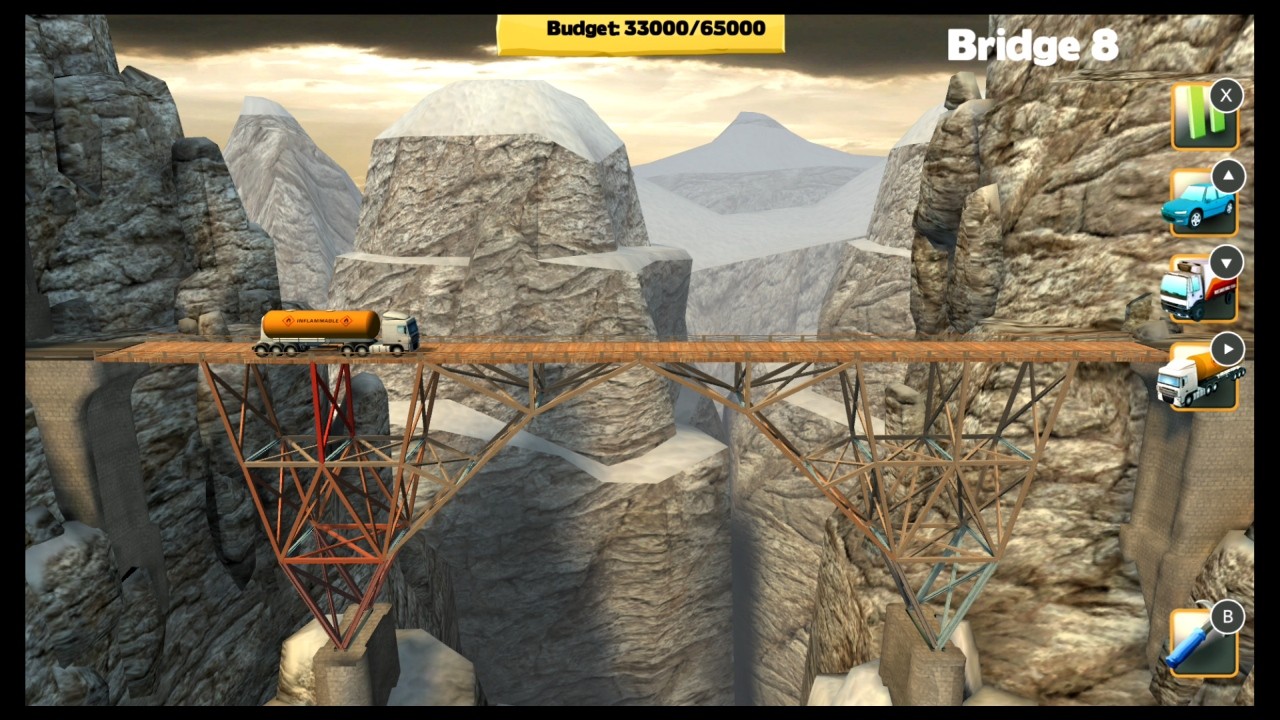 Building bridges isn’t just a metaphor; sometimes you seriously need to intervene so that people can move from A to B without falling into a chasm of digital hell. Thankfully for these unnamed folk, you’ve been hired as the bridge-building prodigy that will safely get them to where they need to be in Bridge Constructor: Ultimate Edition.

When a title is the ‘Enhanced Edition’ or ‘Complete Edition’, you would expect there to have been a base game way before or perhaps it sold so many copies and had such a demand that all DLC is now included in this ultimate edition. Though I’ve seen this sort of title many times on iOS or Android, I’m not familiar with any standout titles, so had to look up the publisher’s site, Headup Games, to see that the original Bridge Constructor came out almost a decade ago. Before we look at what new additions are included, some details on the base game.

The plot of the game is to get a series of vehicles from one side of the screen to the other by building a bridge and without it collapsing. This relies a great deal on physics and of course, resources – the more you have of the latter, the better quality of bridge you build. However, focus everything into one place and neglect another? Well, gravity will get the better of you, and you can kiss that promotion goodbye. Also, publicity won’t be good for a bridge builder when their construction fails on first use.

Other than the principal goal of getting vehicles to safety, you can build a bridge however you see fit and make it out of a variety of materials to suit the need. The options include wood, concrete and cables. The better the quality, the better the bridge, but a detriment to your available budget. Why so many bridges though? Well, on the fictitious island of Camatuga, an earthquake destroys all the bridges so it’s your cue to help the citizens (and earn a few pennies in the process). 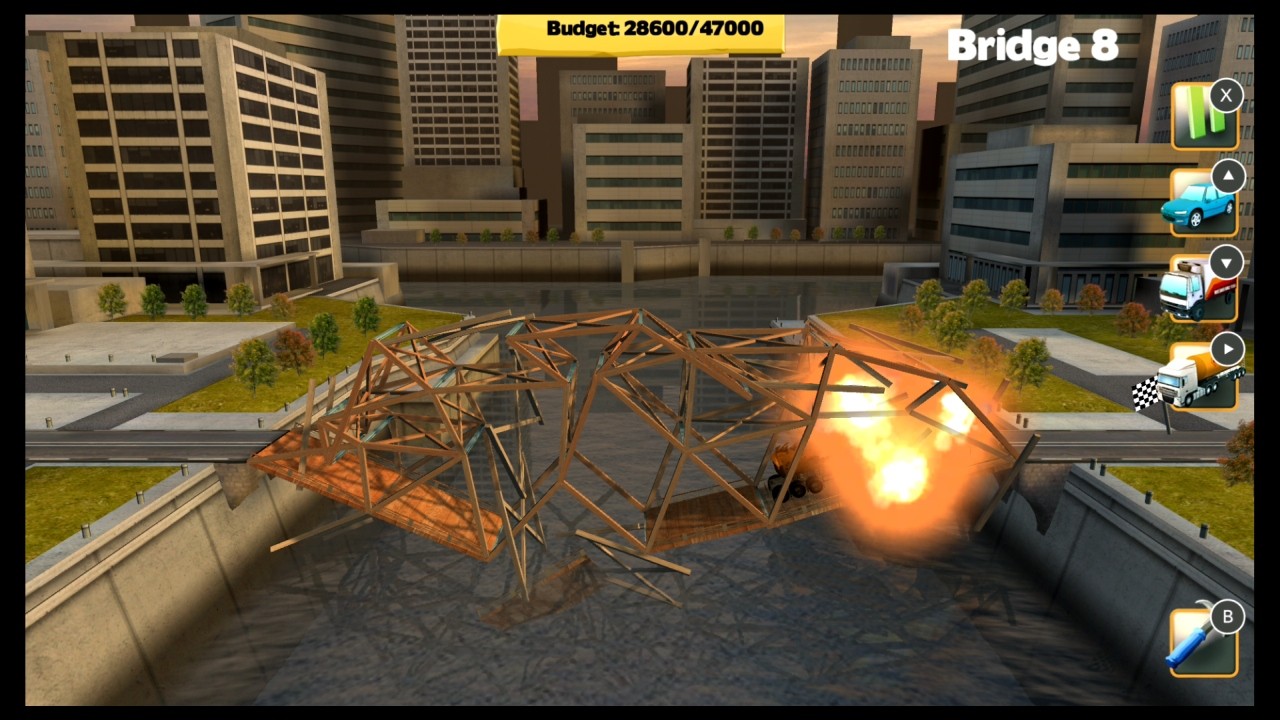 At the start of each area, you have a budget to build an appropriate bridge; selecting your materials from the right side of the screen and placing them in the centre by using anchor points. A grid system overlays the screen to ensure that you are accurate and can line up each component accordingly – each placement is deducted from the budget at the top of the screen. When you have built a suitable bridge that you are happy with, you can complete a test run by sending vehicles over. Each car that makes it to the checkpoint gives you points, though get a selection of trucks over and you are awarded a bonus score. The noticeable difference between the trucks over cars is the weight; so if confident, always go for the trucks.

Selecting components and navigating across the screen is reasonably intuitive. At first, there seems a few too many controls but stripped down, it’s a case of choosing the components and laying them down. Additional options include undoing a move or deleting the bridge entirely, and you can activate this from a menu to the left of the screen or the shoulder buttons act as a hotkey. For simple bridges, you won’t need any of these functions, but as bridges get more complicated and trial runs prove ineffective, there will be a lot of trial and error involved.

The backgrounds in Bridge Constructor: Ultimate Edition are great. They offer a lot of charm to this series of islands, and the bridges themselves are pretty well created. The vehicles are pretty dull though and were the weaker side of the presentation, but it’s the physics that steal the show here. You won’t notice them at first as the early levels are so straightforward, you begin to wonder if there is any challenge to it, then all of a sudden, the bridges start to bow and show visible signs of ineffectiveness.

Levels aren’t particularly long – there are over 40 of them, but I found that I took my time with them and that level of patience often paid off. But Bridge Constructor: Ultimate Edition brings a lot of fun with it before you think it might be a little void of any enjoyment. I do think that the game could have milked the comical element of it a bit more and hammed it up for all the disastrous constructions. While it isn’t exactly a deadly serious simulation, or sides more with a deep strategic approach than a gung-ho speed run attempt. 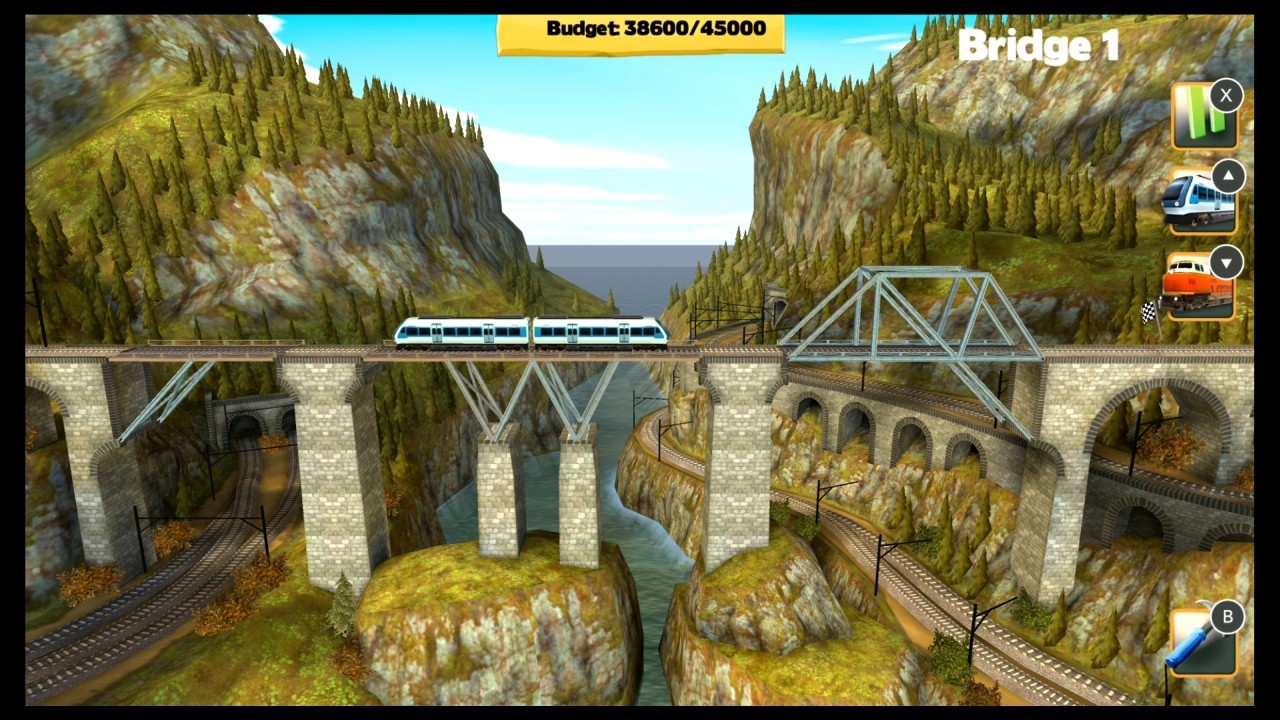 With the incentive of getting a high score by ensuring all the trucks safely make it over your creation and not just the cars, Bridge Constructor: Ultimate Edition features a DLC pack of Slopes and Trains. The first is an expansion on the bridge building theme, only with a twist: you build slopes. It’s in the title, but basically, you make a slope from one higher point to a lower one, set on a new set of islands – the imaginatively titled, Tiltin Islands. As the slopes are much steeper, this creates added pressure from the vehicles that use it. I also found that these are more hack jobs as you don’t have the same strong foundations as you would with a bridge, so it’s a nice challenge.

The second DLC pack is the Choonited Kingdom and this time you need to get trains across your bridges. These are more on an epic scale, as the sheer weight of the trains will see your latest design end in failure as this mode is pretty tough. Doable, but tough. Compared to the base game and the Slopes DLC, I found that my test runs resulted in a few more fatalities than I had expected. Not that you see any of that in the game of course, but you will see exploding trains – unless they hit the deck first.

A quick note on the controls: while there is the option to play this on the touchscreen, I wouldn’t advise it. A more detailed grid can be turned on and off to help you draw straight lines, but I often found that I would create my baseline, i.e. from A to B, at staggered angles and it would not only waste my materials, but would be a complete waste of time. Using the joysticks is fine and much more accurate. With that in mind, I used the touchscreen to navigate menus, but not recommended for the actual design work.

Bridge Constructor: Ultimate Edition is a mobile game through and through, and it doesn’t bring new schematics to the table, seeing as the original game came out in 2011. That said, it’s a welcome addition to the Switch and offers a chilled environment – even when the foundations of your bridge come crashing down. There isn’t any sense of urgency, and that’s reflected in the music too – I would take my time, make use of my anchor points then watch the various cars and trucks pass. And fall to their doom.

A slow-paced strategy title that fits well on the Switch. It features touchscreen input but best stick with the joysticks for the accuracy. It can be repetitive, but that’s the nature of the game, and if you find any enjoyment with the first five or six levels, you’ll enjoy the rest of the game, including the two added packs.