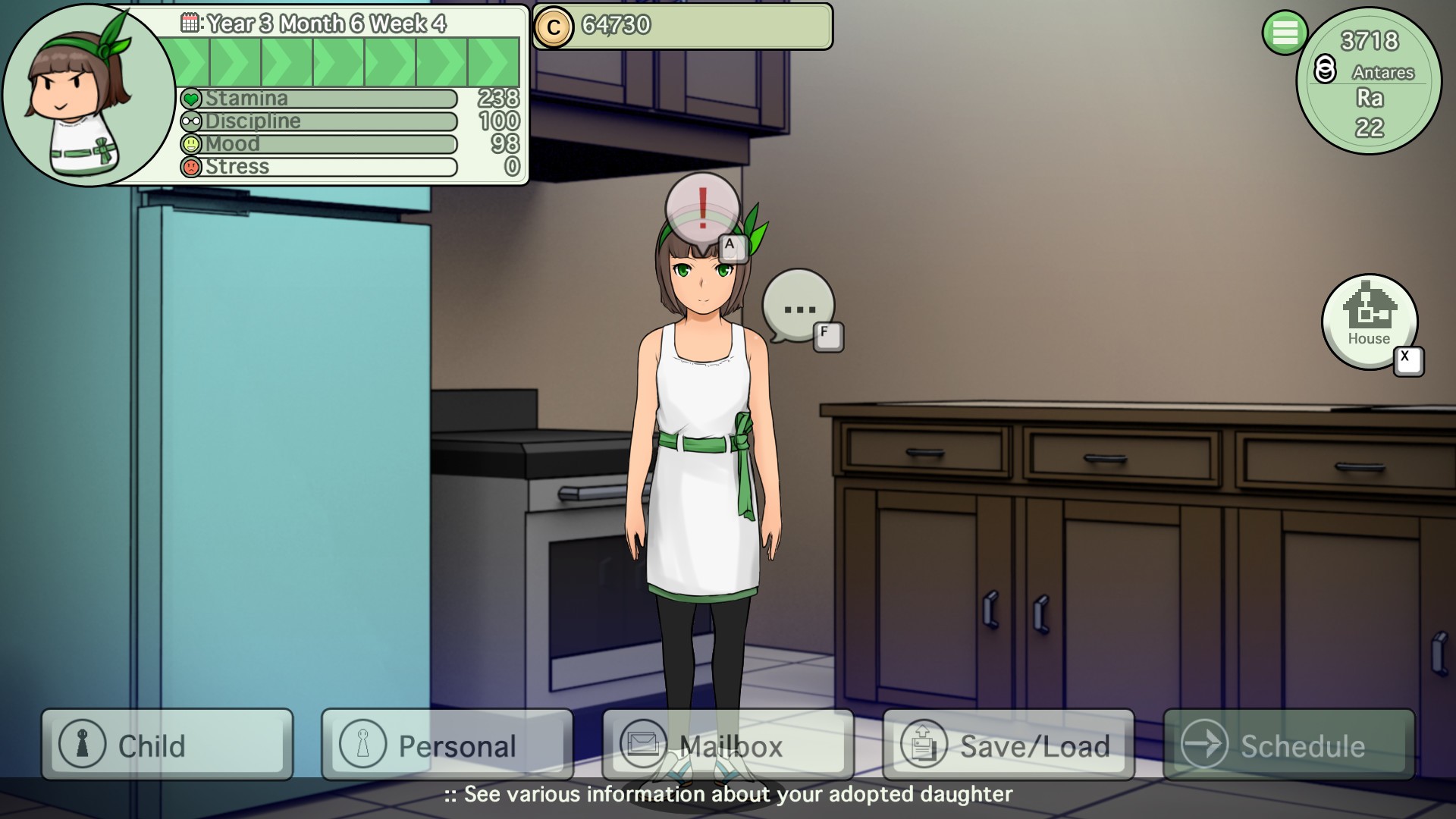 Sitting in the sunlight, lounged in the grass of the park among the whisper of leaves nearby, it can be easy to forget that life on the Arks is not always idyllic. The massive sky-ships hold enormous cities, stocked end to end with citizens going about their lives. Those on the surface lived a little more rough and tumble, but life was tolerable on the Arks. It was even easy to forget that Ark 2 had gone down so recently, that survivors were still being distributed among the other Ark ships.

In time, those survivors made their way into citizen’s homes. The Administration had absolute control on the Arks, and those who were given the responsibility of becoming family to young survivors should see to it that they complete their civic duty with honor.

Shortly after the fall of Ark 2, the player is put in charge of a young child recovered from the surface. She had amnesia, and couldn’t recall what life she had led prior to being recovered and brought to this home. The player’s part was to be her guardian. The player chooses their backstory, her name, and the player and their virtual daughter begin their new life together.

Ciel Fledge – A Daughter Raising Simulator starts in earnest at this point, giving the player an empty week’s calendar, and is told to fill it. Instructions on how to schedule a week are given briefly, in addition to a number of quick fly-throughs of the various stats and figures the player can use to reference their current levels and help them anticipate future needs. All of this tutorialization is useful in concept, but is difficult to parse in practice. Ciel Fledge offers players a wide array of bars, meters, measures, and options, most of which are either briefly explained or not mentioned. The context for what these bars mean, or why they’re important, will only really come through play. In short, the player’s first few minutes with the weekly planner will be a roll of the dice. Pick some menu options, click proceed, and then see what happens. 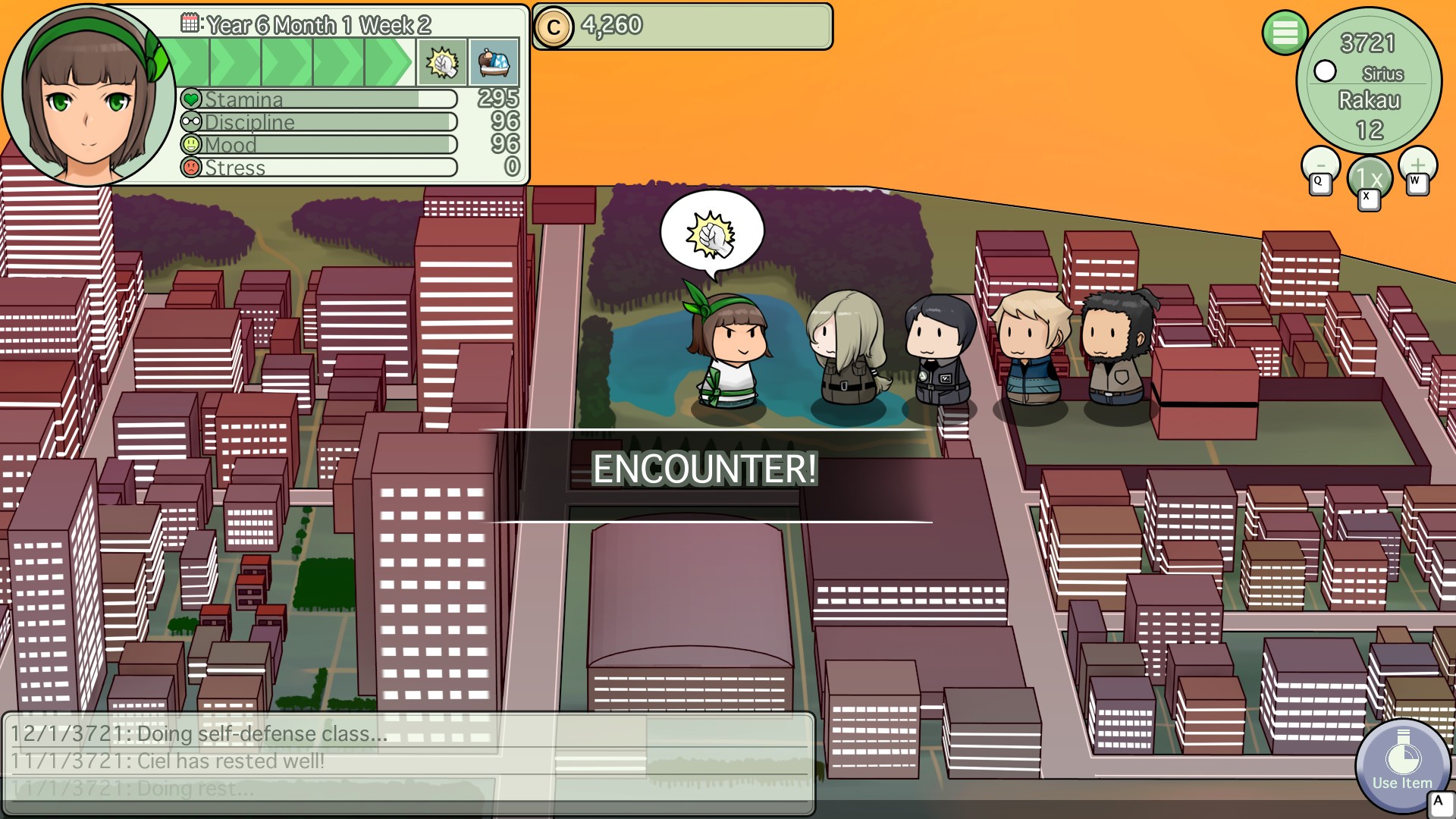 As the game goes on, the context for all of the decisions up to that point start to gain some dimension. This perk granted by the player’s chosen background, or this equipment item, suddenly makes sense when contrasted with a string of mechanics the player hadn’t seen yet. The player character’s schedule, the classes, the dietary choices start to make a kind of sense in seeing the direct ways the player’s actions influenced outcomes. While most everyone can understand in the abstract that an arithmetic class would raise a Logic stat, what that Logic stat does later on, or how it influences the class or skill progress tree would require poking around the schedule screen and understanding the way the game communicates its requirements.

Given that, the bulk of Ciel Fledge’s early game is spent in a state of quasi-tutorial. Things happen, which change occasional small dynamics of play, but as players experience the way the player verbs interact with the game’s intended mechanics, they can better understand how to plan for the future. New weekly schedules, new classes, new skills to unlock, new items to equip. Everything comes together piece by piece. The side effect of a measured pace through the early game is that really getting the game won’t happen for the first several hours, and any sense of understanding will happen as the player is realizing the length of the planning stage. The daughter’s stats do not grow quickly, so while it means early fumbling doesn’t doom the player to poor use of time, it does mean that the first chapter seems to drag on as the player grinds the same relevant skills for several weeks at a time.

The daughter’s weeks are broken into daily activities, with each chosen class or activity taking up an entire day. Day 1 could theoretically be Art Class, Day 2 could be Gymnasium, Day 3 might be a rest day, Day 4 could be a small job in the neighborhood, Day 5 could be a class on civic duty, and Day 6 would be another rest day, with Day 7 being generally slated for socialization or shopping for most weeks. This week-to-week structure is accompanied by little animations that bobble around the map, giving a kind of charm to the passage of time, but by the end of even Chapter 1, the player will find themselves accelerating through it by using the game’s provided time passage tools.

In addition to choosing what classes (and thus statistics) the daughter will focus on, player will have to manage her Stamina, Stress, Mood, and Discipline levels. These levels are mostly intuitive, and the patterns they follow will be pretty apparent to anyone within an hour or two of play, but they feel arbitrary. Just another bar for the player to keep track of. While the idea of managing various moods and needs because stats and skills is admirable, the early game is already mired in things to keep juggling. Having to memorize social levels, skill levels, stat levels, equipment, stress, mood, discipline, money, progress needs, and upcoming steps in real time is just a little too much. It’s not precisely un-fun, but it feels like too much. Just one too many balls in the air for the player to juggle. 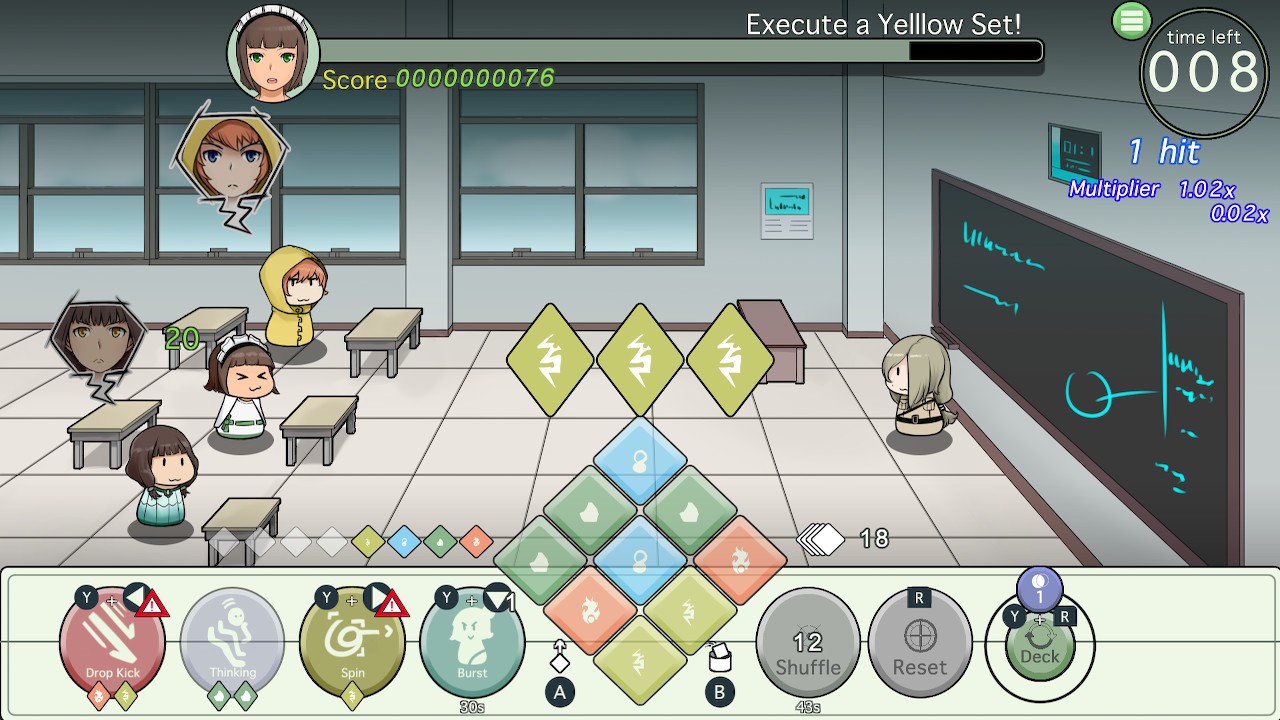 As the daughter goes through her weeks, little encounters and moments will pop up, giving the player little snippets into life on the Ark, or the personality quirks of the people who live there. The daughter maintains social connections with the neighbors and her classmates, and furthering these connections gives rise to new skills and passive abilities that will come in handy further down the line.

Sadly, these moments are a little hollow. Player decisions don’t have a great deal of gravity, so a player will encounter story beats regardless of how they structure their daughter’s week, so even if a player chooses to attend a swimming class in the southern portion of the Ark, she can also have a story moment in the business district to the west with a character she otherwise wouldn’t encounter that week based on the player choices. These moments feel scripted, and operate independently of the player’s action, and having a kind of slippery disconnection from the story moments the game insists on putting in front of the player despite giving the player a plethora of options feels a little dishonest.

Further, the story moments don’t feel organic. The setting, the world, the greater good-style motivations are all easy to understand. However, individual conversations, lines of dialog, or moments don’t have the same energy. Characters are all a little bit theatrical, with their various moments being played at full volume, almost cartoonishly reactive and animated at times, and a little too subdued to the point of confusion at others. Characters have a varied set of interests, and can appear with the player’s daughter at classes that don’t immediately seem to match the personality types, but that rondeur is more environmental storytelling than actual characterization. Beyond where they appear, the dialog doesn’t really do much service for the character moments that should happen, but often don’t.

Which, in total, means Ciel Fledge is a weird game to come to grips with. From a surface glance, there are no significant complaints to lodge against the game. Characters are a little difficult to grasp intuitively, the game fails to tutorialize its primary mechanics as well as it should, the story moments feel like they’re indifferent to player action, but all of those are just little nitpicks given that everything the game tries to accomplish mostly works. The player’s weekly schedule choices have a direct effect on the daughter’s stats, these stats play a direct part in the success or failure of the chosen activities, these activities have the outcomes that their efforts prescribe. The things that have to work for the game do, but they don’t always feel great in so doing.

Ciel Fledge – A Daughter Raising Simulator is a lukewarm game. It will accomplish its goals, but its nearest neighbors in the genre will do the same business a little better, a little cleaner, a little faster, and a little nicer. There’s nothing wrong with Ciel Fledge, but sometimes “It’s okay.” isn’t a great sell.