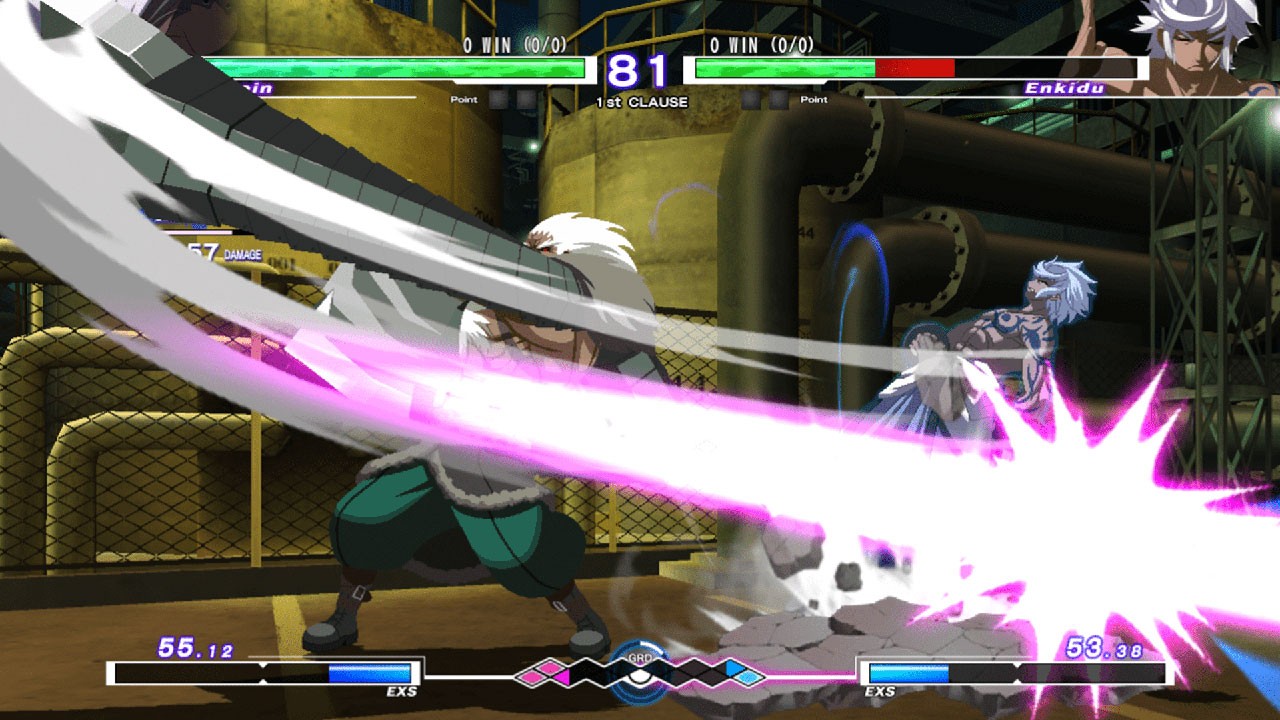 When new fighting games come across my desk, I’m usually pretty excited to try them out. Firstly, because fighting games nowadays are filled to the brim with ridiculous lore, information and reasoning that somehow makes everyone but me feel better about the game. I genuinely don’t care because I’m just punching things, but hey, it’s cool that there’s a 90 minute movie and a 74 page manifesto to explain why a man with a tiger’s head is fighting a 16th century samurai. Second, fighting games are one of those things where you can instantly drop in and out of the gameplay without leaving residue behind. With RPGs or visual novels, I’m left thinking about what I’ve done, what I’ll do next, and how the outcome might change. Not fighting games: I’m gonna hit someone until I win or until I lose, and then I’ll go and do something else. That’s seriously my entire mental facility regarding the genre.

Which means I’m both the best and the worst candidate for the awkwardly titled Under Night In-Birth Exe:Late[cl-r]. I was immediately drawn by the insane name (which I’ll shorten to Under Night from here on in) and the fact that Arc System Works had a hand in it. Arc has a lot of irons in the fire with the Switch and, really, with every gaming platform out there, so I figured there had to be something to enjoy here. The mythology regarding Under Night is complex as hell, but it comes down to this. Once a month, the Hollow Night happens in different parts of Japan, and it’s been this way for centuries and no one knows why. When it happens, evil creatures (called Voids) appear and can attack certain people who can perceive them. Surviving people turn into In-Births, and they can fight Voids and also make sure other In-Births don’t go out of control. That is the most bare minimum plot that you can get to even tangentially understand what’s going on. As this comes from the delightfully named French Bread devs, there’s a massive storyline for each and every one of the fighters, and the longer name of this game (the original being called Under Night In-Birth) means that years of DLC, additional content and unlockables are baked into this definitive edition. But let’s not get ahead of ourselves: let’s look at the game. 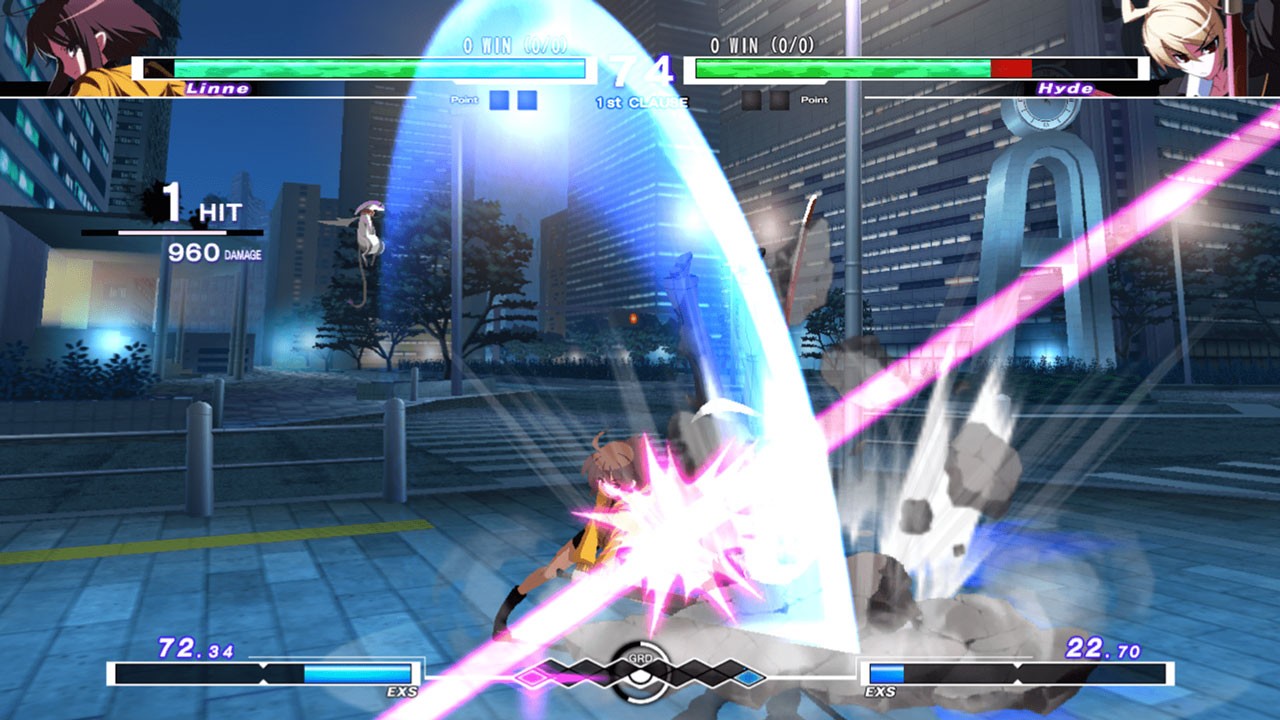 As a 2D fighter, Under Night In-Birth puts you in a best of three brawl against another character. You have a light, medium and strong attacks, and you also have a “universal mechanic” button that comes into play with other buttons. Two button combinations activate grappling and throwing, there are button flows to activate moves, and the name of the game is juggling combos. If you’re fast on your fingers, it’s easy to lock in a player into a nonstop hail of fists and kicks, and players need to know how to break out of combos if they want to survive. There’s also two things to remember for traditionalists coming into the game. First, you’re able to cancel a button combination with what’s called “reverse beat,” or entering a sequence in reverse in order to change up how your combination was supposed to go (so, if you were going with strong attack, you can cancel it into a light attack for quick response). Also, you don’t air dash, but you do have a sort of angular double jump that can make for some interesting feigns and intros to combos.

The big addition to this game is the Grid Grind, where you have a tug-of-war power meter at the bottom of the screen that goes back and forth with the opponent. The objective is to fill up your meter and push out the opponents to get a temporary buff state (called the Vorpal State) which allows for 10% better damage, some extra move access and a cool, blue aura. The Grid can be shifted through landing and dodging hits, executing combos, blocks, breaks, etc. You can also use that “universal mechanic” button to quickly start charging up that Grid with a taunt of sorts, but you need to be ready to get out of that stance as fast as possible, especially when the AI or your human opponent is absolutely sick of your jibes. The Grid, even though it’s very cool and pivotal in higher stakes matches, didn’t factor in for a majority of my arcade runs, but is pretty essential to the tournament view and for veterans of the game.

By and large, Under Night In-Birth was really freaking fun in the combat sense. There wasn’t any excessive floating or waiting, I wasn’t left with endless blocking or opponents who were relentlessly running down the clock; it was all very visceral (without being bloody) and you could appreciate the fast speed of the combat without needing to get overwhelmed. Straight up button mashing could easily get you through the first or even second round of the fight, but strategic button mashing took me all the way to the end of my first run through with Mika (whom I adore, by the way). As you decide to unlock further information, it becomes more important to understand what works best for you, be it the heavier or lighter fighters, if you prefer range or melee, and how to best approach the different fighters. Truth be told, there are a MASSIVE number of characters available thanks to all the DLC, and they’re all available from the get-go (well, almost all), so feel free to experiment around and test out who meets your mettle best. 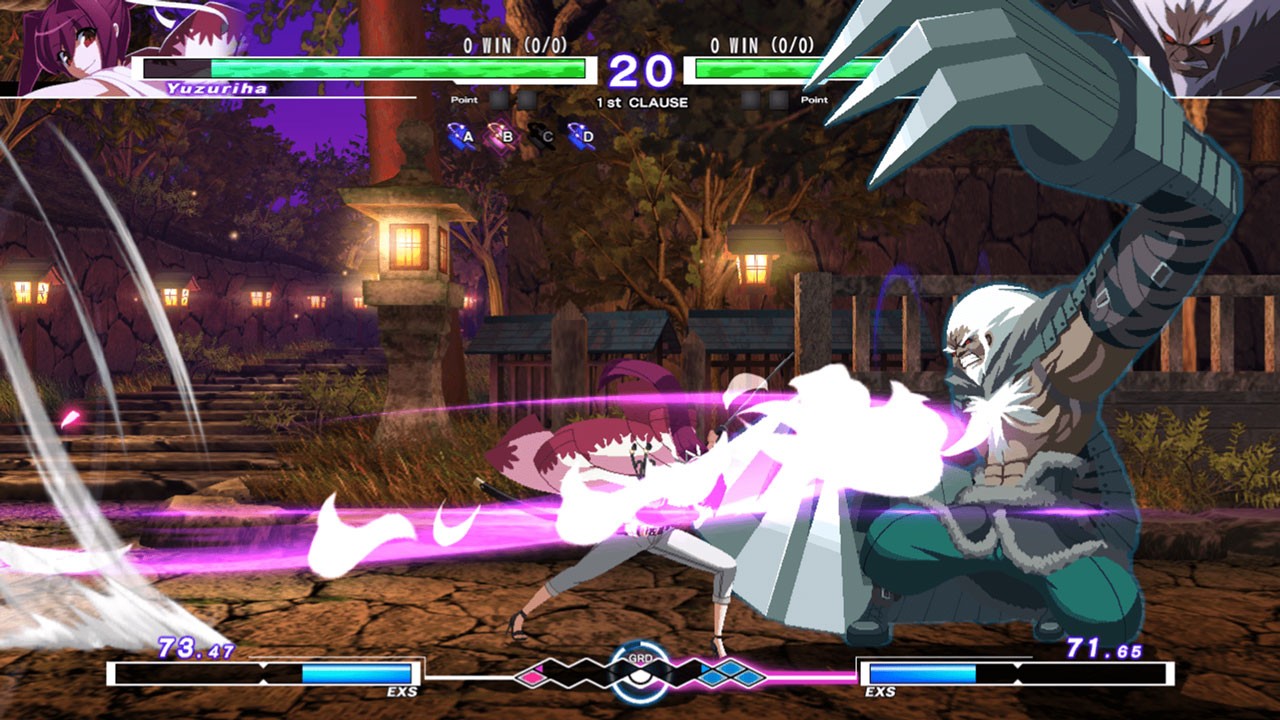 The presentation of Under Night In-Birth is what’s really going to sell for a lot of fans. First and foremost, the graphics are delightful in an anime styling. There’s a certain amount of roughness to the characters, wherein they’re quite clean and cute from afar but have some darker lines and jagged edges upon closer inspection. The result really gives you this sensation of the Hollow Night creating madness and new powers that subvert human realities. Things like gigantic claws, insanely sharp blades, mechanical arms and some kind of human/robot augmentation all show up (and many more combinations) within the cast, so it’s only natural for players to find someone who fits the bill in terms of what they want. Additionally, you get hooked on these characters by unlocking additional chapters of the visual novel lore that is Under Night In-Birth through completion and exploration. My first run netted enough in-game currency to either get a bunch of photos within the gallery, some rough sketches, or a couple of chapters worth of the storyline, which is voiced as well as shown and read. Like BlazBlue or Guilty Gear, Arc System Works once again puts their stamp upon a fighting game that’s so caught up in bizarre technical details that you have to have your reading glasses at the ready to play a game where you beat a loli cyborg to death.

The writing, additionally, is pretty damn funny between the matches. There’s a lot of awareness and near 4th-wall breaking with characters addressing each other, recognising the different tropes they each represent, and condemning the pseudo fan service while being cognitively deaf to their own representation. This carries a little further into the visual novel aspect, but I don’t want to spoil the storyline overall. It can be incredibly long to read, but that adds to the replay and the longevity of the game overall. You can do the arcade mode or the versus and just wail on each other, or you can read, chapter by chapter, how Voids turn In-Births into energy to power ancient machinations and how there are different sects that fight each other but also fight another, 3rd entity, and it’s delightful in its madness. Seriously, it’s as if someone took the anime section of TV Tropes and dropped it into a melting pot with a Buster Sword and a pair of boxing gloves.

For fans of this particular fighting game, you’ll be pleased to know the Nintendo Switch passes the mustard in terms of frame rate and response. Using both a Bluetooth controller and the JoyCons, I can confidently say that Under Night In-Birth Exe:Late[cl-r] will be more than satisfactory for delivery compared to the console versions in other households. There is zero reason to hesitate or be worried, and know that you’ll be getting the full, amazing experience with your portable machine as you once did in the arcades across Tokyo. It was a freaking trip, it was fun, and I think I’ll have to keep playing if only to try and understand it even better.

A fantastically detailed and completely bizarre fighting game that centers around impossibly long lore and a massive cast of fighters.