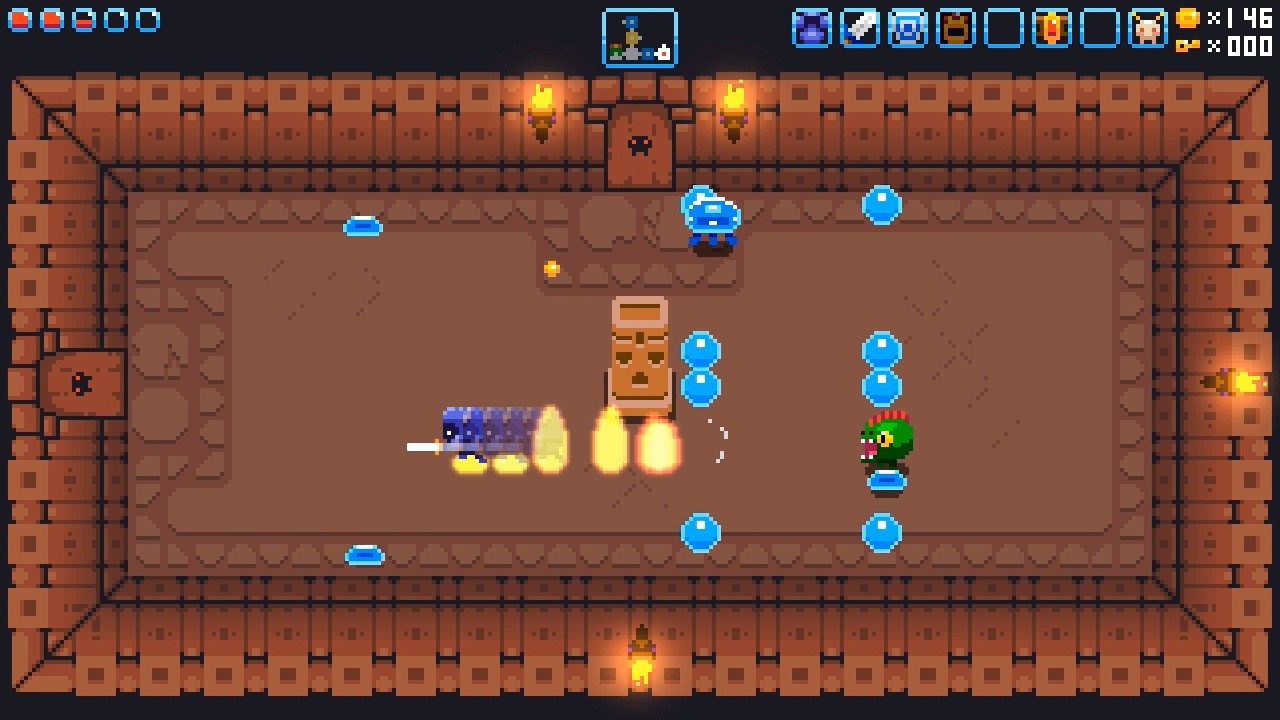 Ratalaika Games publish another easy to acquire Platinum Trophy in the form of Knightin’+. There’s no explanation for the + in the title of the game, but Knightin’+ is the latest indie release which follows a dungeon maze like approach to its gameplay. Knightin’+ is another retro inspired title which is aiming to hit your nostalgia sweet spot by bringing back memories of yesteryear.

In Knightin’+ you play as brave Sir Lootalot on his fantastical quest to loot his way through four dungeons. Played from a top down perspective you have to make your way through the maze like dungeons. Each dungeon level contains roughly 12 floors each which are accessed via one of the north, south, east or west doors if they are available. In each of these floors there will be a combination of enemies, traps, keys or loot and you have to clear them to gain access to the next floor. Luckily you find yourself a sword early on so you can start dishing out the pain from the beginning. If you think the images make Knightin’+ look like a Zelda clone, but that’s where the comparison ends. 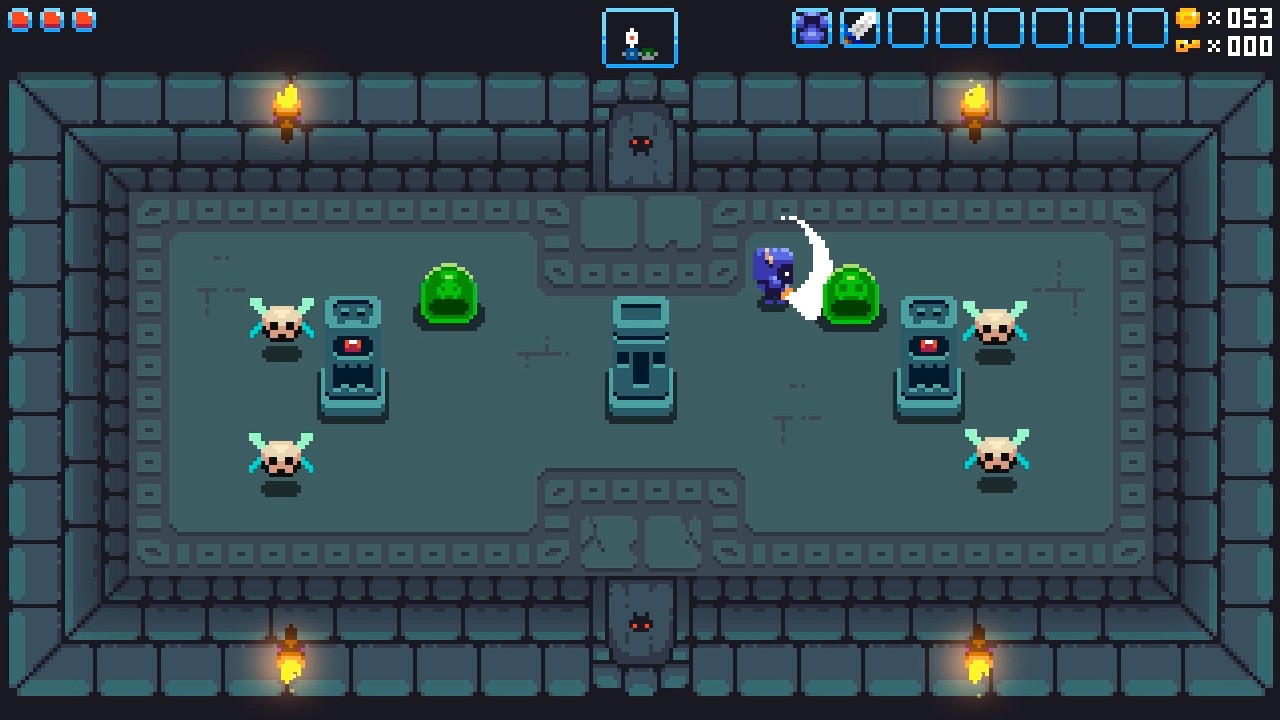 As you venture deeper into Knightin’+ you will be able to gain new skills and items to help you on your quest. They include a shield, a wand that shoots, a dash ability and even a more super powered dash that leaves a trail of fire behind. Throughout each of these dungeons you will come across keys that will unlock certain doors, thankfully there is a little map at the top of the screen to show where you’ve been. There is a small puzzling element to Knightin’+ which isn’t much more than moving blocks are walking over tiles to light them up, it’s not at all challenging to know what you need to do, sometimes there are even some instructions on the floor if you look close enough. Dotted across some of the dungeons are shopkeepers where you can buy additional accessories, keys and other health related items. Just like many older dungeon crawlers, you can increase your health as you make your way through Knightin’+.

The enemies found within Knightin’+ are fairly standard affair. You come across dungeon dwellers who shoot out projectiles, flying foes who’s attack patterns are pretty easy to follow and a variety of seen plenty before kind of adversaries. Thankfully, when a floor has been cleared they won’t respawn which makes the backtracking more forgivable. There are end of dungeon bosses who are pretty tough, but just like their smaller cousins have fairly straightforward attack patterns which can be learnt quickly. When you beat the bosses you get a charming little end level sequence and then move onto the next dungeon. Unfortunately the combat in Knightin’+ becomes non existent once you learn the dash ability, you just end dashing constantly to hit enemies and they can’t do much about it. Something that is creeping back into a lot of indie titles are the use of cheats, you can unlock a cheat to give you extra coins, one hit kill and give you invulnerability. A little bit of variety when navigating between the levels is the ability to teleport in later dungeons. 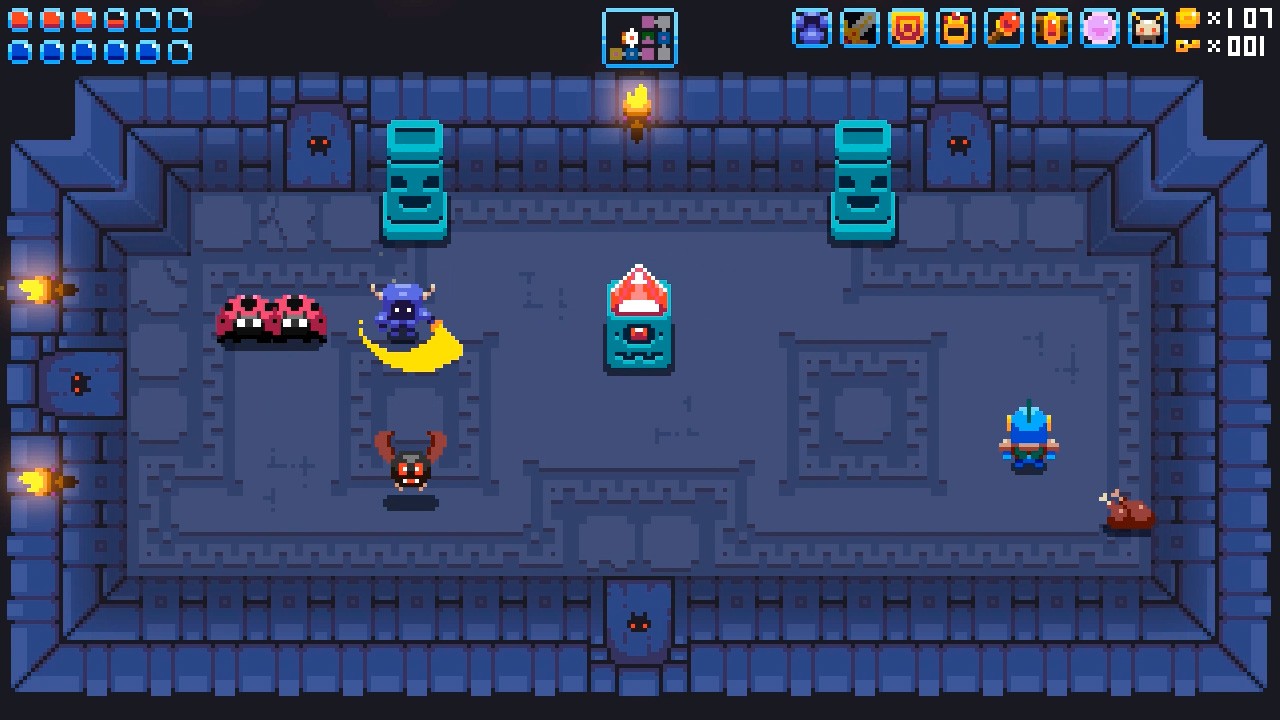 Graphically, Knightin’+ is very retro and quite plain on the eyes. The sprites are chunky pixel art which sort of gives Knightin’+ an endearing quality to it but the dungeons themselves are bland affairs, very little detail to be found within them. Dialogue is reasonably witty in-between the levels but you’ll probably want to turn it down as it just gets repetitive after a few mins. Knightin’+ lacks any replayability once completed, depending on your dungeon crawling skill level, you may get 1 to 2 hours out of it.

Knightin’+ is a pretty simple and quite easy game to play. It’s top down retro gameplay will invoke memories of the fun people had in the past with this genre, so you may find that Knightin’+ ticks a couple of boxes for you. However, for the most part Knightin’+ is just an experience that is too basic and the lack of a challenge means your interest will wane quickly. If you like play retro dungeon crawlers then Knightin’+ will give you maybe an hour of an experience, but for the rest of us Knightin’+ isn’t worth too much of your time.

Time for Sir Lootalot to do some looting in Knightin’+