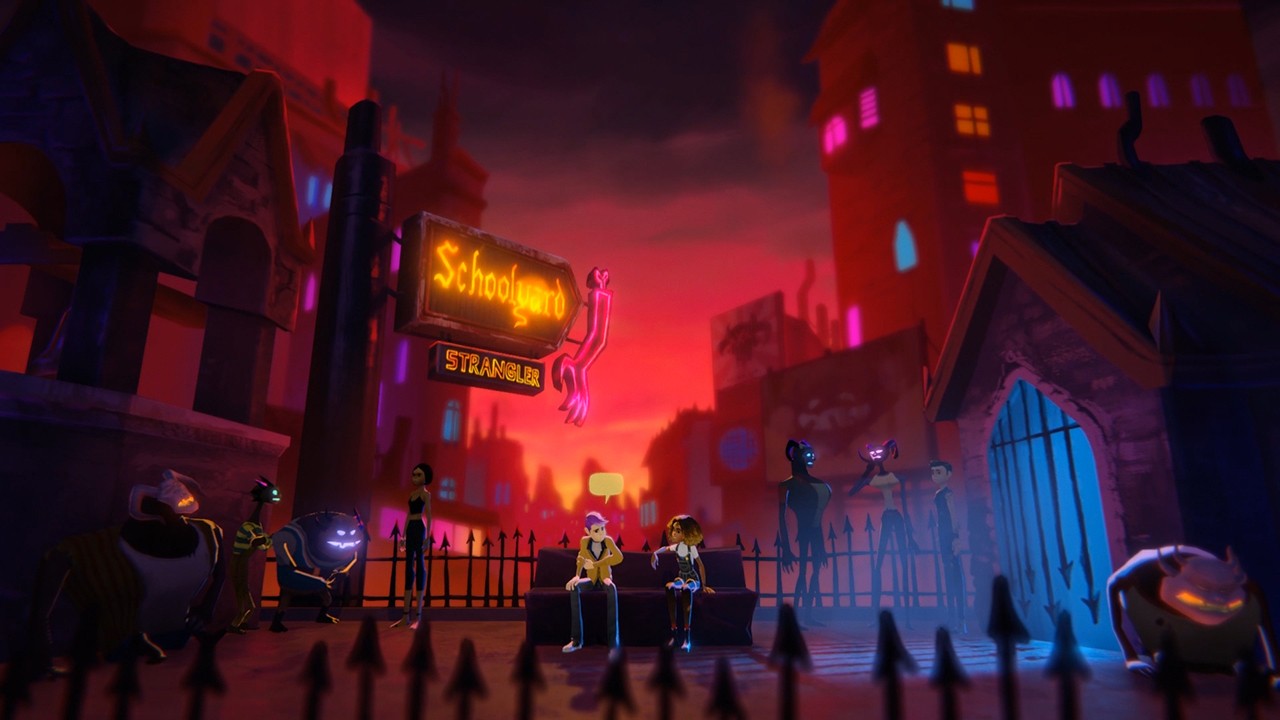 The concept of death and the afterlife have literally been a major part of fantasy, fiction and philosophy since humanity was able to cognitively recognize that they existed and, at some point, we stopped doing that. There’s plenty of theories and ideas, religions and dreams, and I personally believe that, as long as no one gets hurt in the course of your belief structure, go nuts. Who the hell am I to say that it’s right or wrong, correct or foolish? The idea of Hell is one that I’ve sort of struggled with, simply because it doesn’t always seem fair, though most major civilizations and theologies have the Good Place and Bad Place dichotomy. I think it’s because I’ve lived so much of my life in the gray zones that I sort of hope there’s plenty of leniency for judging who goes up and who goes down. For Night School Studio, they’re created a very interesting hellscape through their game, Afterparty, where we all sort of accept that there is a Hell, and there are demons and Satan, and all of them – every single last one – sort of has a drinking problem.

In Afterparty, you get to control the twin roles of Milo and Lola, two friends who maybe sort of think about being more than friends but don’t really say anything, but the tension is there, but whoops, now they’re dead. It’s actually pretty brilliant: the start of the game, the cold opening, if you will, is a mock reenactment of Milo and Lola’s last big college party, where they were saying goodbye to academia and hello to the real world, but, turns out, they died at some point that isn’t immediately made clear, and now they’re in Hell. Clearly, this is not where anyone wants to be, and the two are keen to pick up on a certain bit of Hell lore that interests them. Turns out, every so often, Satan throws a rager at his home to help decompress from all the torturing and flaying and stuff, and everyone has the potential to attend, demons and humans alike. What’s more, if you attend the party, you can challenge Satan to a drinking and partying contest to see who is the bigger party monster. If you win, you can legitimately leave Hell, perhaps returning to your Earthly form for another shot at life. If you lose…well, you’re already in the worst case scenario, and you’re probably pretty drunk at this point, so it’s sort of a wash. 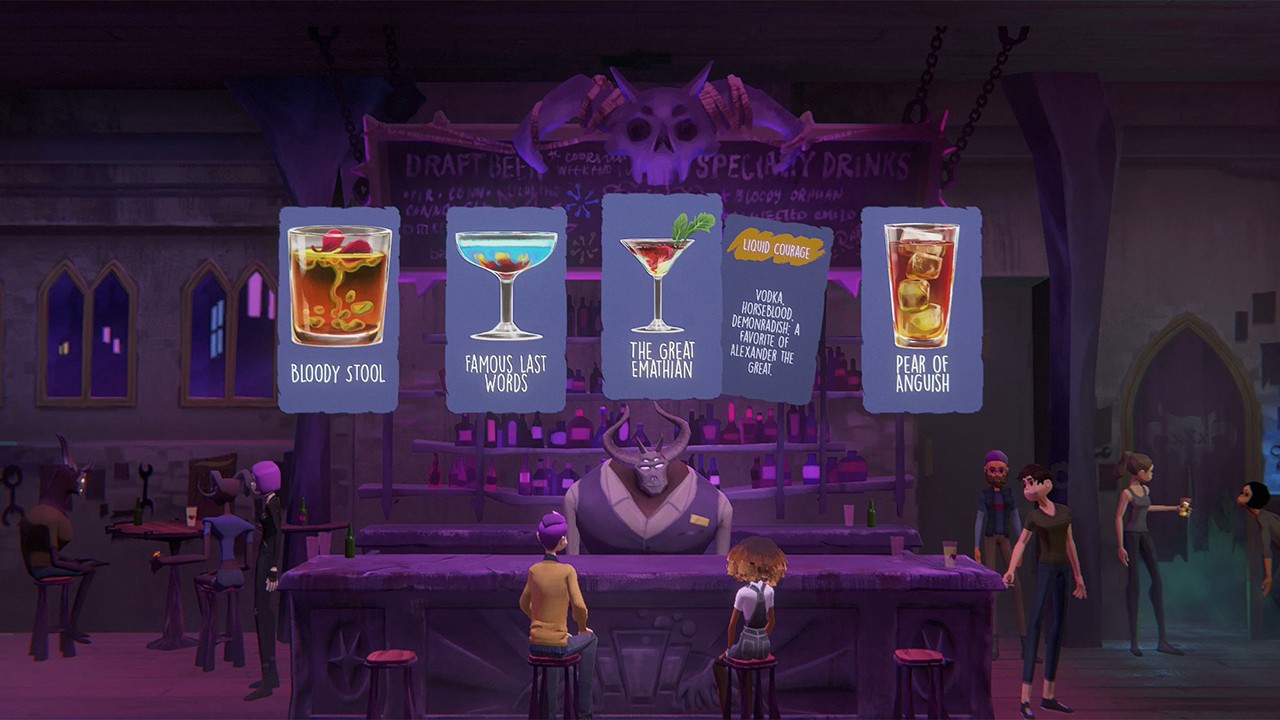 Night School Studio has already wowed me once with their previous Switch port, Oxenfree, which was an adventure game that felt more like a visual novel, incorporating a lot of great dialogue and storytelling to mix up with some classic puzzle solving and item collecting. Afterparty takes some of these ideas and continues with them, though in arguably different fashions. Once again, you’re traversing in a 2D fashion, exploring the depths and different areas of Hell, looking to find certain people/demons with the right information, the right items to imbibe or pass on, and the right sort of sequence that’ll be needed to get you before Satan and be ready to drink your ever-loving behind off. Similar to Oxenfree, despite being an adventure game, nearly everything is more focused on what you say and what you do. There’ll be moments of interaction where you can do small mini games of sorts (like trying to land a free throw early on), but these are not nearly as frequent as the more important “limited time” dialogue. You read and listen to the conversations as they develop, and you’ll barely get a heads up for what your choices are to say in response before you need to make the call. As a result, Afterparty is not a great game for button twitchers: mashing the A button while you’re waiting for someone to finish talking is a great way to accidentally activate a dialogue path that you’re not necessarily on board with.

Mechanically, Afterparty works out pretty well. The walking is a bit slow naturally (and the running can be almost frantic), but this is more of a vessel to get you to the meat and potatoes of everything, which is the conversations and talking that happens within the game. Unlike Oxenfree, I felt like there was an even clearer linearity to where you should be travelling next, whom you should be finding to talk to or what is the next Mcguffin that’s needed. Oxenfree certainly wasn’t obtuse, but you could end up in a head-scratching moment if you lost momentum at any point in your play. By contrast, Afterparty is always rocketing ahead towards the party at Satan’s estate, towards your hopeful release from Hell and to thrusting you into the arms of new and old faces, putting you into wild and unexpected places that ask you to make the most out of what’s happening and talk to everyone, hear everything, and pay attention if you really want to know why maybe Hell is the way it is. After all, if there’s one thing that has been consistently good, it’s the conversations.

I said this previously with Night School Studio’s previous game, and I’ll say it again: I don’t know how and why they get amazing voice takes, and I think it’s their superpower. We live in an age where big name celebrities lend their voices to video games without a second thought (Conan O’Brien is in Death Stranding, for God’s sake!), but there is something about the scripting and the pacing that makes Afterparty sound and feel like a supernatural comedy drama rather than just a video game. Milo and Lola have amazing chemistry together, and they play off each other’s lines and off the atmosphere around them with a natural ease that makes me feel like they’re best friends in real life. The different demons, especially Apollyon and Asmodeus, are alive with spirit and vigor, and they have that fascinating quality that makes them worth listening to and not just reading. Sure, it could have been a seriously dark and awful story about life in Hell and everlasting torment, but it’s instead a captivating and humorous take on the afterlife, complete with some much needed exposition to remind everyone that Satan doesn’t want to be here anymore than any of you do. As Milo and Lola are told “He doesn’t make the rules down here, but he does have to enforce them.” 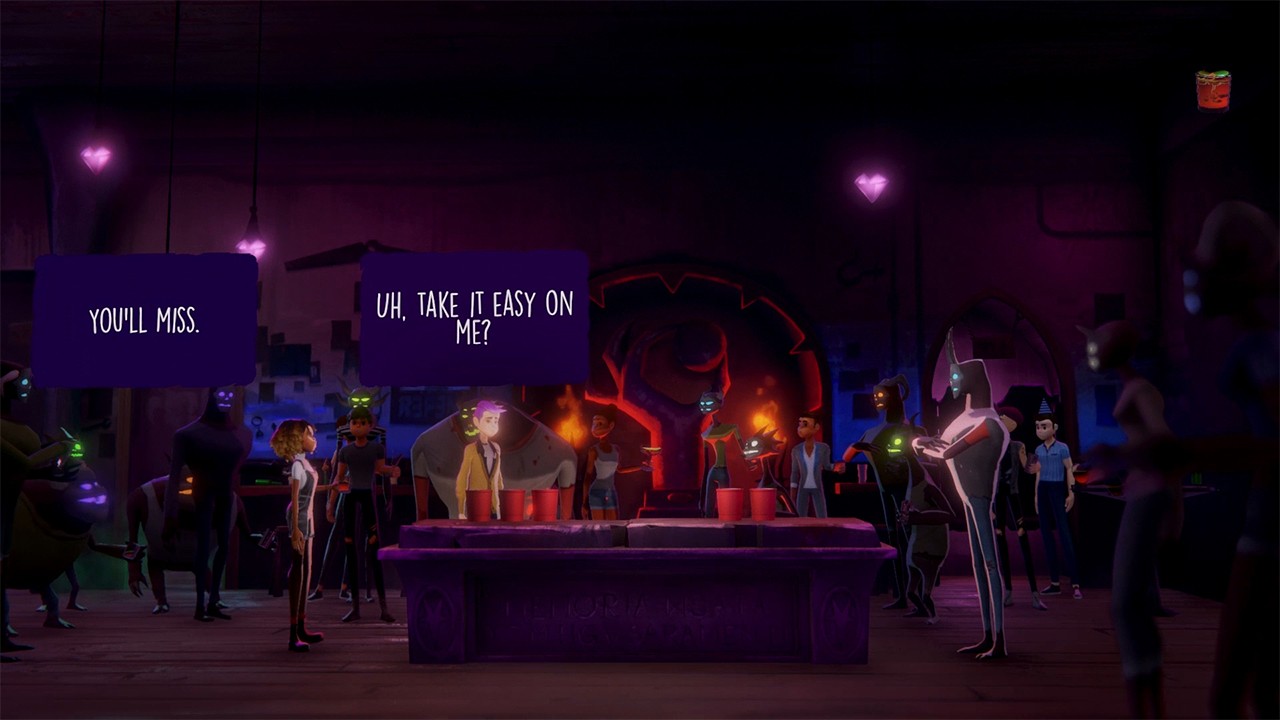 Have you ever felt bad for Satan? I mean, no, of course not, he tried to fight God and that ended badly. But Afterparty paints this picture of a dude who is immortal, very powerful, but incredibly limited in what he wants to do, and is using alcohol as a coping mechanism. It’s such a strange thing, but hearing and seeing him and the portrayal of his character almost gave me a new perspective on the Christian faith and ideas of damnation. Almost, because Afterparty is a video game and not the New Testament, and I’m not about to cash in my agnostic chip because I saw Lucifer doing tequila shots. But that’s the power of the dialogue tree and the writing of Afterparty: it creates an interesting and semi-sympathetic character. When you couple that with the way that Pandemonium is designed and created, you get this different idea of Hell and such ideas, and it’s genuinely cool. Like, there was some serious thought that went into making Afterparty look and feel the way it does, and it’s storytelling in a way that I could have never conceived.

Players looking for a lot of action or even a lot of replay value need not apply. Afterparty has a few different endings, all of which involve Hell in some way, and I highly recommend at least seeing the “good” and “bad” endings for our two protagonists. The game has a bit of a fixed pacing, but I also saw it as a dark version of being on a Disney ride. You can’t make the car go slower or faster, but you can drink in the details around you as you move forward, and you can always notice something new or something that you missed the first time around. I prefer Oxenfree because I think the spooky storyline is more my cup of tea, but Afterparty is sacrilegious without being sanctimonious. It’s gonna rub certain people the wrong way, but it does so with no malevolence or anger. It’s smart without being snooty, and it’s funny without being slapstick or goofy. It’s well written, and that’s the best praise I can give a great story.

Possibly the only game on the market where you see Satan as a clear and present “bro.”