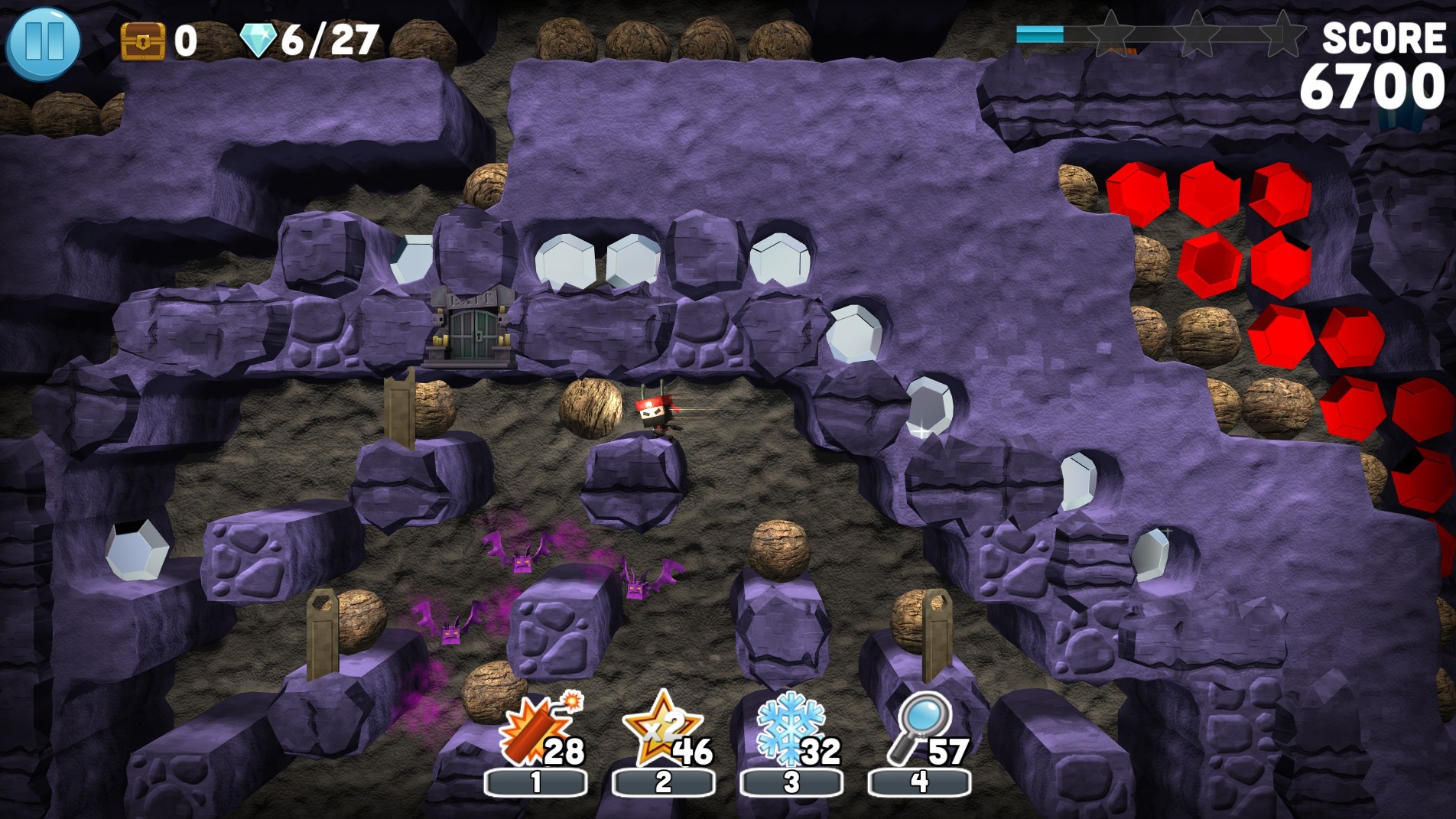 Don’t bother going back to watch most of the cartoons you enjoyed as a kid. Seriously, just don’t do it. Nostalgia is a feeling that can be preserved and allowed to run its course without needing to use the Internet to reaffirm these feelings. The Pirates of Dark Water was a pretty dope epic when I was young, but it doesn’t hold up, as it’s full of plot holes, needless comical banter and some pretty extreme forms of Deus Ex Magic Pirate Amulet. The same, sadly, holds true for video games, but it’s even worse than just revisiting old ideas. More and more, companies are picking up old IPs and trying to breathe life back into things from the past. I feel like it’s too dangerous of an idea to keep playing, because we either need to admit the oldies haven’t aged well (thus the need for HD remakes) or that the old ones are good enough, but we want to sell the new ones to people that impulse shop based on fond memories. Neither is great, and both are pretty frequent actions in today’s market.

With Boulder Dash 30th Anniversary, this is already a sticky place to navigate because it’s not like there was only one Boulder Dash. This game, which originally spawned in 1982, has seen so many sequels and reboots that you can find one in almost every generation and iteration of gaming. This is a game so old there were multiple versions on the Apple II, several modern PC versions, and even more than one mobile version. This 30th Anniversary version is technically the newest, but even that originally came out in 2016 (and I can’t seem to find many differences between that version and this Switch port). The nice part is that we get to see the strongest culmination in the series from where it started, and, yes, it’s technically the better version because it’s built off of the original 30th anniversary (2014) but done up with a more sound design than the iOS and Android release (read: they stripped out the IAP). But the result is still…well, it’s something, I guess. 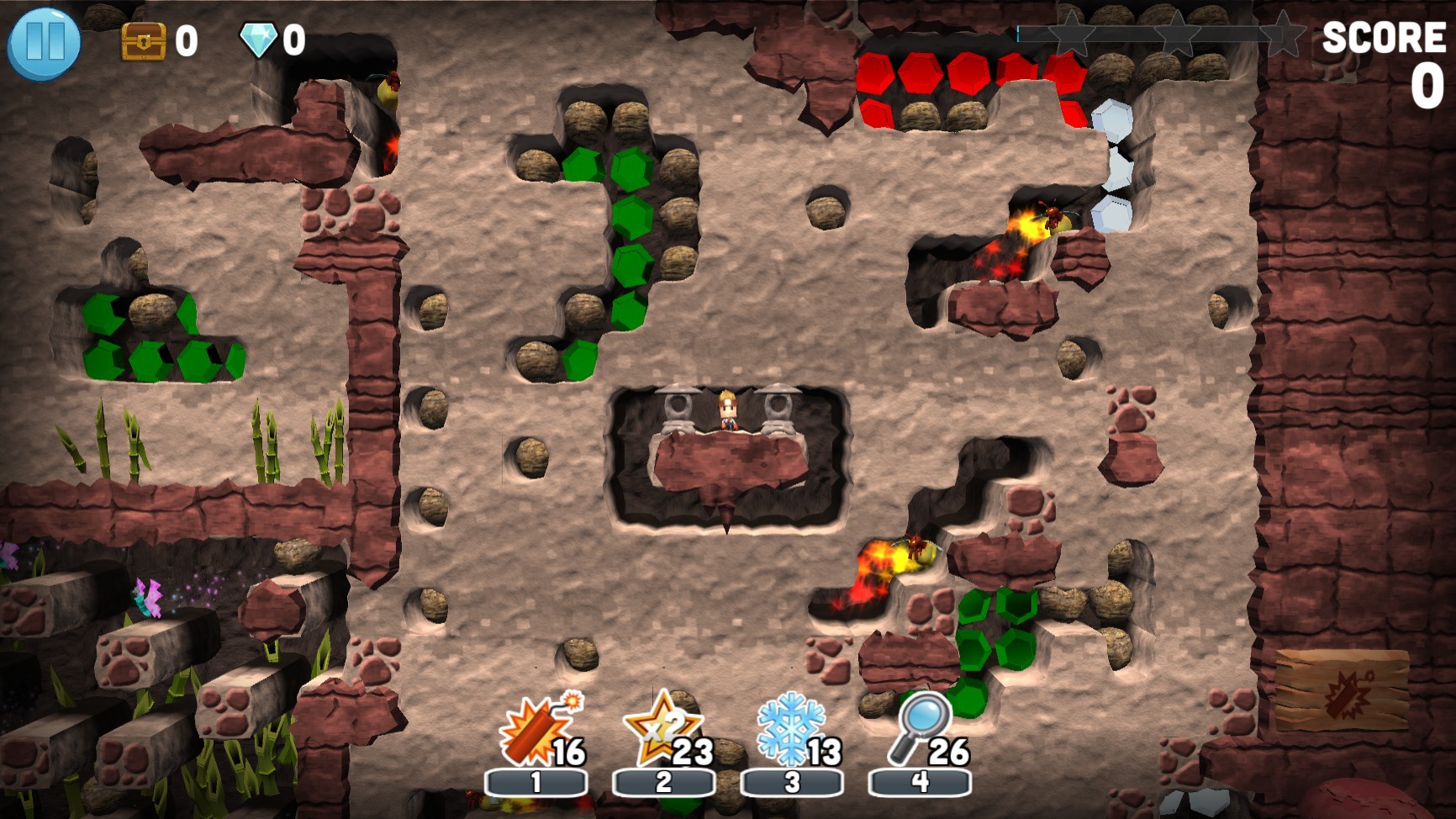 Boulder Dash has always been a relatively simple game. You are a dude in an underground cavern. You move around and have to tunnel through a sort of semi-solid soil a la Dig Dug, but there’s also plenty of hard walls you can’t tunnel through. There are rocks that need to be moved, dropped and shifted, you can explode them with dynamite if needed, and you can use the rocks to take out the baddies, all of whom are 1 hit kills if they touch you. The objective is to collect a certain number of gems and make it to the exit before the time runs out, and the exit won’t open unless you collect some of the gems. With the 30th Anniversary Edition, you also have the option to set the game to “Easy” (no time limit) or “Hardcore”. Of course, players might be a bit disturbed to find out that the aforementioned Hardcore mode basically means “play in a style similar to the original version and not the watered down one for mobile.” Boulder Dash originally punished players for things like getting hit by falling gems or standing in a way where a boulder should crush you, but that’s no longer the case, and your character becomes a tad immortal in that sense.

Interestingly, the change of the rules for deaths doesn’t make Boulder Dash 30th Anniversary any easier on normal or even easy mode. That toggle only affects environmental deaths and the timer. The level design, most of which is culled from several generations of games (and a fistful of original worlds) means that there is still traces of the old razzle dazzle at the core of things. You can easily end up tunnelling in a way that will leave you unable to get to your gems or find the exit, and enemies aren’t any more forgiving than they used to be. When you first get going and get through the tutorial levels, you start to think that you might get the hang of it. Move around, grab gems, don’t die, boulders can be pushed…alright, it all makes sense. And then you hit the first obstacle where there isn’t a clear path, and the little character pops up to tell you: use a stick of dynamite to blow it up. If you were wondering, dynamite certainly wasn’t part of the original formula, but you can always add more things to make it a newer experience, right? Especially when they give you five sticks of dynamite to start. Wait, give you five?

As it turns out, porting over from the mobile version was really not a great choice in the console leap for Boulder Dash 30th Anniversary. The powerups that you have access to (including things like time freeze, add more time, score multiplier, etc.) can really turn the tide of the level from “Oh, this sucks” to “huh, that was easy.” And, unfortunately, that’s sort of how it was intended to be. As this is a console version, the in app purchasing is disabled, so you don’t have to shell out precious cash to pick up the gold bars needed to get more powerups, but there are a handful of stages where the powerups are the serious make or break for accomplishing the level in any amount of time. ESPECIALLY the dynamite, which is like bringing a goddamn howitzer to a knife fight. Once you blast through your mistakes, you’re virtually untouchable. It’s really unfair for me to immediately raise my hackles when a game looks and feels like a mobile port, but this is a rough spot to be in. If you’re going to align with a series older than most of the players, you need to at least attempt to be faithful to the source material. 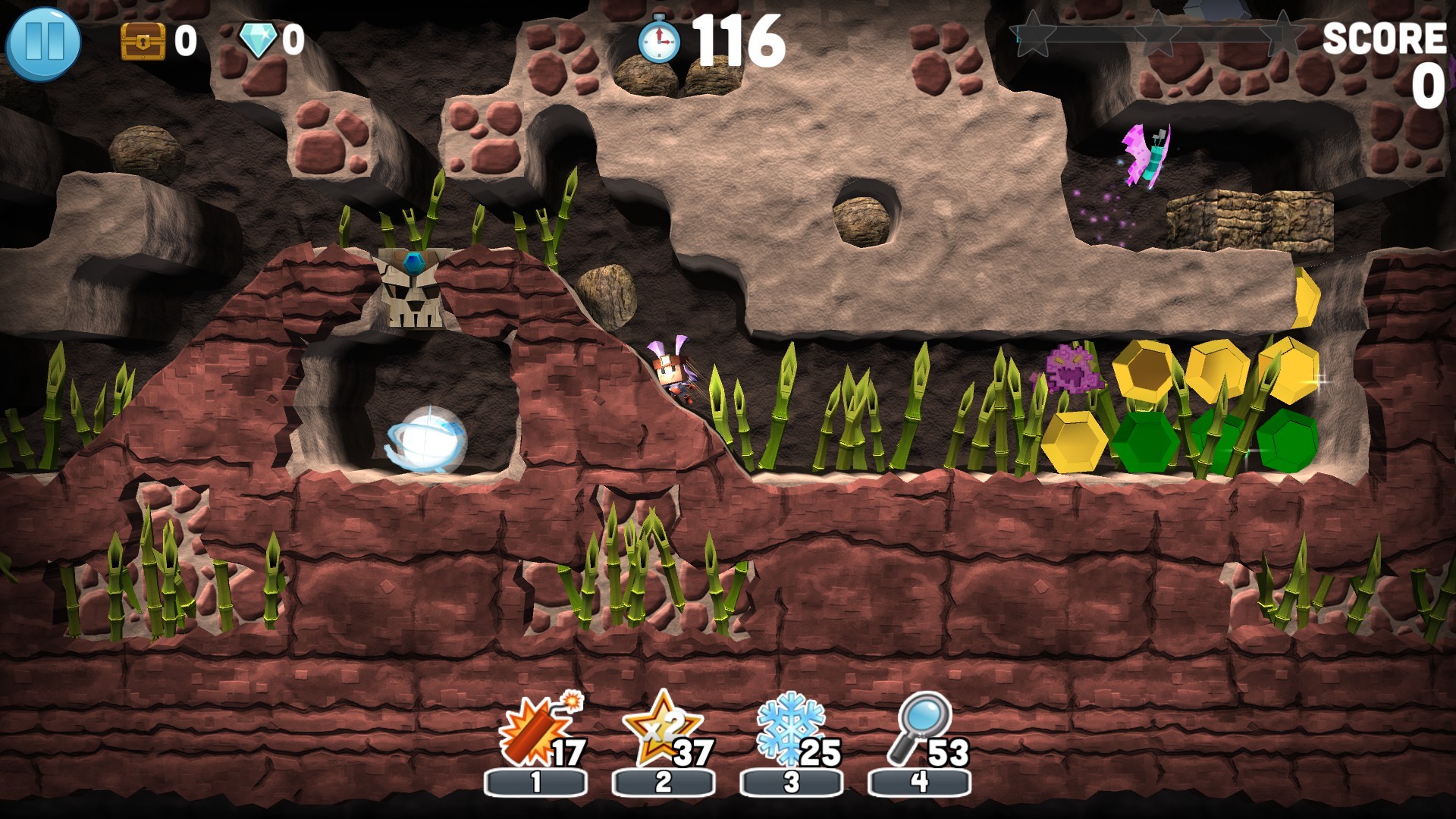 Which is seriously a shame, because there’s potential. There’s new levels made by the game’s original designer, but they still carry the “try to get three stars!” essence of the other stages. The graphics are obviously improved from the wireframe of the olden times, but there’s something inherently dislikable about how the different sprites are crafted. There’s an attempt to marry the more angular feel of yesterday with the brighter, rounder color pallette of now, and the combination doesn’t jive well with either camp. The enemies are simultaneously nondescript and too detailed in very specific ways (the eyes of the bats are quite creepy), and I never found a hero to unlock that I really liked. It’s weird to see levels across multiple terrains (while all still being “underground”) that all feel the same even though there’s holiday packs that should inherently be set apart. The excitement of trying out something that was a callback to an older game series is really dampened by realizing that it’s presented in this face-paced, instant gratification timeline where you just want to play it, get three stars and go onto the next one. More than 200 levels sounds great, but it loses appeal or interest when every song sounds the same.

It’s hard, because Boulder Dash 30th Anniversary isn’t a bad game, not by a longshot. It never crashed, the install size is paltry, and there’s a lot of replay value inside the different stages and the surprising number of worlds. No, the problem is seriously the way it looks (God I wish the art was better) and the name it’s wearing. If this had been a modern homage to Boulder Dash and was “inspired” by the original, I think I’d be more lenient. Instead, this really, truly wants to go toe-to-toe with the series, and the result isn’t great for nostalgic players. This isn’t the cavern we’ve spelunked before. It’s something different, and it’s something disappointing. By all means, grab it if you love the core idea and don’t mind drifting away from the classic facets, but pump your breaks and dig elsewhere if you’re a monochromatic master.

Sometimes going home again means remembering why you left in the first place in this reimagined version of a very classic game.