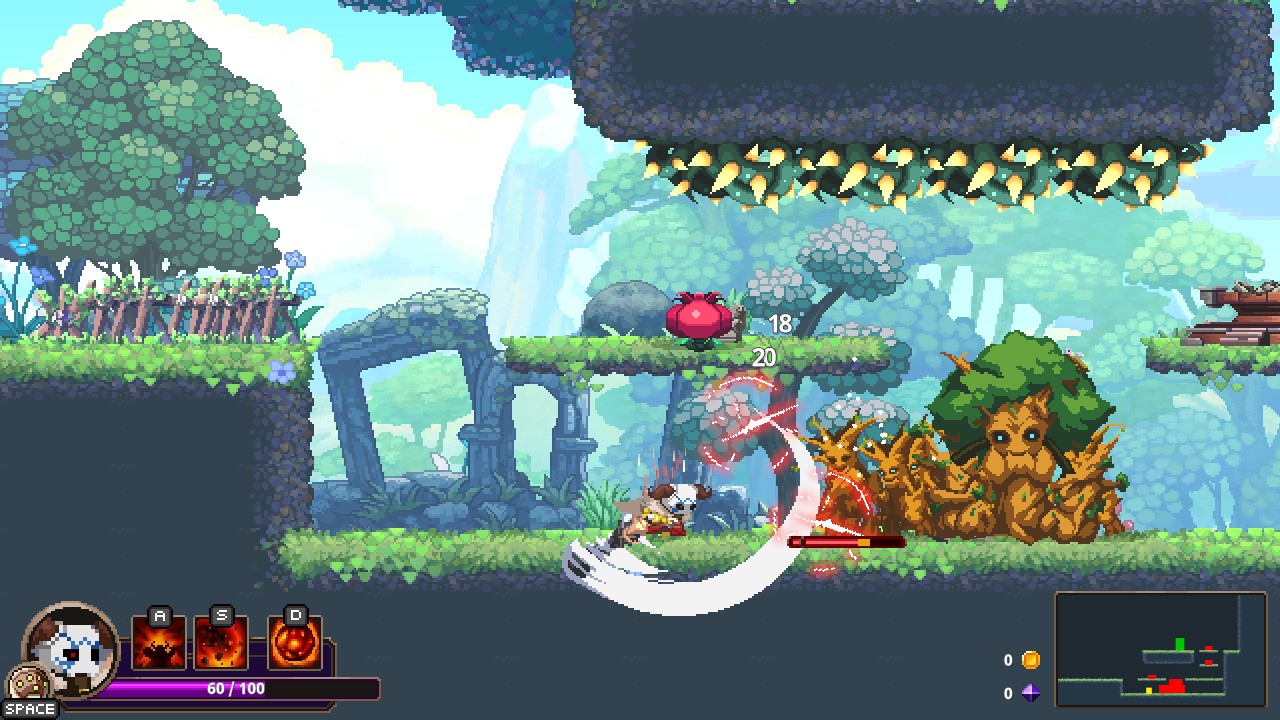 Skul: The Hero Slayer was yet another one of those games that seemingly came out of nowhere for me, as I just happened to run across it while randomly browsing Steam, and for that, I’m glad that Steam seems to know my tastes. With that said, despite its similarities with other action platformers within the roguelite genre, Skul brings a few new things to the table, but even despite that, I believe that this game is being overlooked by a lot of people.

First and foremost, Skul: The Hero Slayer inverts the typical fantasy trope where humans are portrayed as the good guys and the undead as the bad ones, by putting you on the shoes of Skul, a lowly member of the Demon’s King Guard. In a desperate attempt to wipe out all demons and undead from the face of the world, Humankind joined forces and stormed the Demon’s King castle, killing or capturing everyone that came across their way. Now, the last hope of saving His Majesty, The Demon King, falls to you, Skul.

Skul: The Hero Slayer is a genuine 2D action platformer with permadeath and a permanent progression system, and it will feel extremely familiar to those that have played games like Rogue Legacy and Dead Cells. Each playthrough is structured into a series of “rooms”, as in open areas where there’s only one way forward, with these summing up a total of three chapters in the game right now, culminating with a one of a kind boss at the end of each chapter. In order to progress to the next room, you’ll need to eliminate all enemies, after which a door will open. These levels are not only filled with all sorts of enemies, but they’re also often filled with obstacles and traps, which will force you to do some pretty witty platforming by double jumping and dashing around to avoid getting hit. 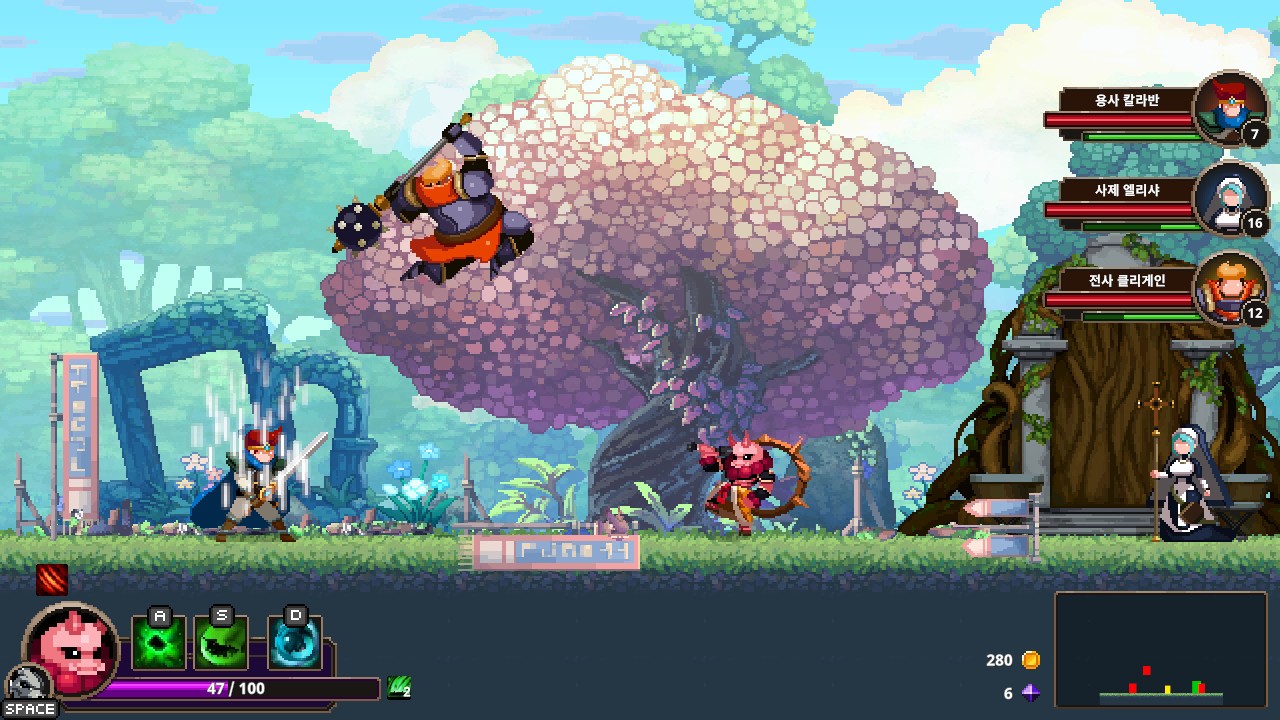 The story and your character serve as the context for the game’s most unique gameplay aspect. Since you’re a skeleton, you can actually change skulls and, in doing so, you entirely change how your character plays. By picking skulls from other members of the Skeleton Guard, you acquire completely different and unique abilities, but you can only have two skulls at any given time. The basic skull that you start with is the one of Skul himself, and besides Skul’s basic attacks, you’re also able to throw your skull at enemies to either damage them or to teleport yourself to the skull’s location.

Now, these skulls come in different kinds of rarity, all the way from common to legendary, so while there are skulls that can feel somewhat basic, like the skulls of other Skeleton Guard grunts that can give you a sword or a spear, and also allow you to make enemies bleed, there are also some really special skulls that capture the spotlight. For instance, there’s the Gargoyle, which lets you fly for a short amount of time and turn to stone and stomp enemies to the ground by falling on top of them, there’s the brutal Minotaur which, despite being slow, can deliver quite a punch and send enemies flying, there’s a glacial skeleton that lets you freeze enemies, there’s even a samurai, but there are a lot more, as according to the Steam page, there should be around 20 of them at the moment. 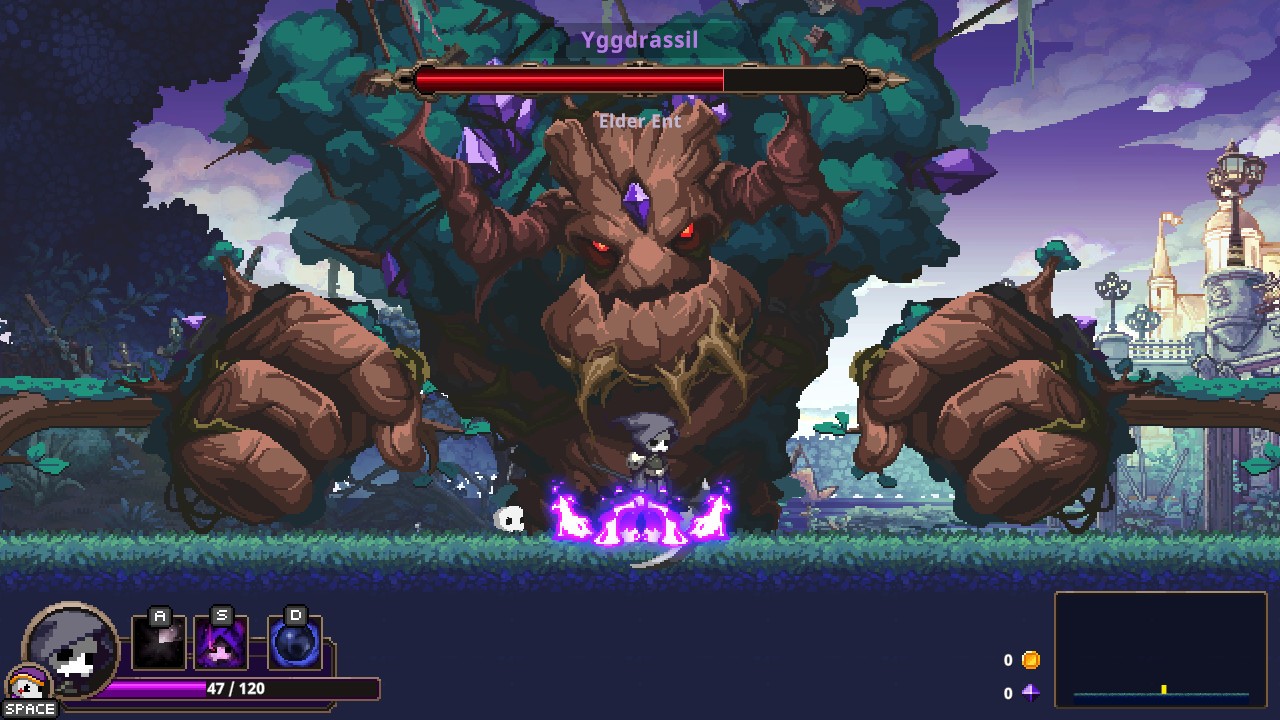 As you play the game, you’ll gather Dark Quartz, these purple crystals that can be used to purchase permanent passive upgrades between playthroughs, with increased basic damage, reduced ability cooldown, and invulnerable after dashing being just a few examples. This is the game’s major progression mechanic that serves to compensate the game’s permadeath, and it works quite well. The reason why this type of progression works so well can be summed down to a simple fact, and that is that the more you play, the more powerful you get, even though you have to start over every time you die. Furthermore, as you keep on dying over and over, and trust me that you will, you also learn more about enemies, how to avoid and counter their attacks, and so on. Everything boils down to a fulfilling learning experience.

There’s also gold that you pick up from fallen enemies, which lets you purchase items that provide you various buffs during each playthrough, but once you die these are lost, they don’t persist throughout different runs. The shop where you buy these items also presents you some of the game’s friendly NPCs, with you meeting other allies during your journey. Every single one of them, every single skull, enemy, item, level, everything is exceptionally visually appealing. The lovely pixel art makes use of a contrast of clean bright colours to convey information and visual feedback quite well. Even when there are a lot of enemies on the screen, it’s still fairly easy to get a grasp of all the action that’s going on.

The skull changing mechanic is undoubtedly the highlight of the show here, and while there are already quite a few options for you to play with, I can’t wait to see what else gets added to the game in the future. I’d like to see more enemy types to vary things up a bit, as well as new mini-bosses and even more skulls. Nonetheless, although the game is in Early Access, and given the fact that the price will increase when the final version is released, I honestly think that there’s already more than enough content to warrant a purchase right now if you’re a fan of the genre. Skul: The Hero Slayer can only get better from here.