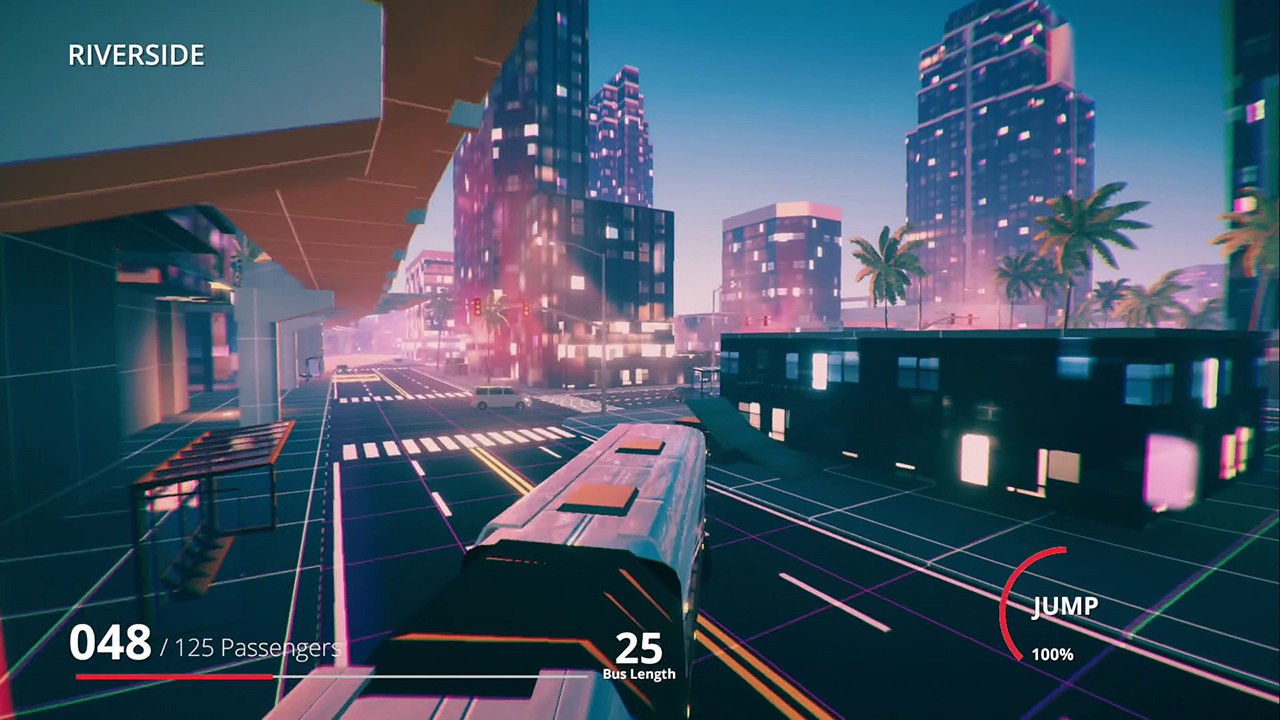 There’s fun. There’s ridiculous. And then there’s ridiculous fun. When there’s a game that makes no sense but somehow still works, I fall in love. Games that purposely have weird objectives or even take a simple premise and blow it wildly out of proportion are some of my favorites. I don’t always enjoy playing them: Goat Simulator and QWOP are only fun for a few minutes nowadays. But there’s always something grand in watching them and trying to see how people are executing them that is genuinely entertaining. It’s why streaming still continues to be popular in spite of thousands of confused parents unaware why their kids spend thirteen hours a week watching YouTube. For Stovetop LLC, they had a vision, a crazy and obsessed vision, and they saw it through. Combining public transportation with the classic game of Snake, we now have Snakeybus,and it’s every bit as odd and addicting as you can imagine.

A puzzle arcade game that’s equal parts frustration and hilarity, Snakeybus puts you in control of a public commuter bus tasked with picking up people and dropping them off at their destination, very reminiscent of Crazy Taxi (no Offspring soundtrack, sadly). However, as you continue to successfully pick up and drop off passengers, your bus gradually lengthens and grows across the level, becoming multiple sections and segments of utter bus madness, until the “Snake” element takes hold. At first, you only feel like this is a simple delivery game, but when you are running into your own bumper and needing to jump over the undulating middle section of yourself, then the game takes on a real charm and insanity that needs to be played to fully appreciate. 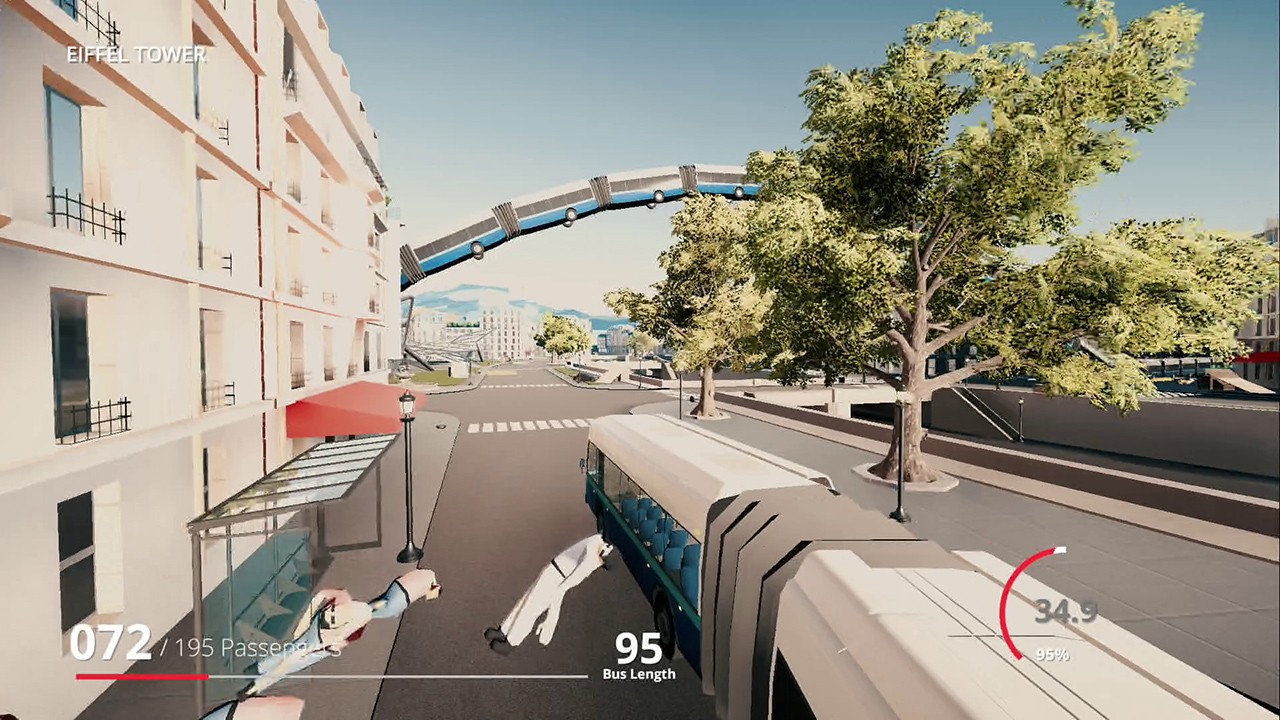 You might have noticed the word “jump” back there, and it wasn’t a typo. To help alleviate the obvious problem of a bus becoming unbearably long, Stovetop LLC has created a truly unique and beautiful control scheme to match the utterly bonkers objectives. Your bus can speed up and slow down if necessary, but never come to a stop (stopping for more than a couple seconds means game over, which also means exploding). On top of that, the bus is able to leap into the air, which can be anything from a graceful vault over your own midsection to an awkward, twisting flop from one terrain to the next, sometimes resulting in you causing your own failure by not sticking the landing. Due to physics that I cannot and will not understand, the leaping arc now becomes an apparition that exists as long as you have bus bits left to go through the motion. That is to say, you can leap, go drop off more passengers, come back, and drive through the arc of your own body(?) on your way to the next location. It’s strangely elegant and beautiful, if absurdist in its own right.

The simplicity of the mission and ideas of Snakeybus leads to a lot of creativity in other vectors, so Stovetop LLC had their work cut out for them in making the game both enticing for replay and long form time investment. From the start, you have several stages already unlocked, each a bit stranger than the last. Sure, you could do a bus route in a peaceful suburb (one of the easiest places to get your first high score), but why not tool around the multi levelled highways of a bustling city? How about the dorm room of a student who has left out several ramps and chutes for their matchbox cars, which are convenient new avenues for your bus to travel? Also, if you’re not a huge fan of using a traditional commuter bus, high scores will unlock additional vehicles for you to cruise around in, which somehow are even funnier because they aren’t traditional segmented vehicles. A school bus, for example, should never be long enough to see on three different roads at once. The inclusion of the ClusterTruck is an awesome unlock, and navigating the streets of Paris is a surprisingly clean and gorgeous representation of the City of Lights. I mean, as much as it can be while drowning in bus parts.

The classic mode of Snakeybus is where it’s at with this Nintendo Switch port, given that any sort of multiplayer mode is nonexistent in local settings. This is a great title when it comes to playing just a few minutes at a time and setting up a combination of elements that appeases you most. If you really enjoy the Caves, for example, and you want to see how long you can get your Party Bus over several trial and error moments, then fantastic, you’re exactly where you should be. The game takes zero time to really hold your hand or educate you in terms of what to do other than to splash the controls in your face for a second before setting your bus off and running. Much like the movie Speed, there isn’t time to slow down or wait for anything: passengers literally seem to grab a hold of the bus as it blows by, clinging for dear life in a human paper chain until you eventually reach the correct destination. It’s silly and fun, and it’s perfect in bite sized doses with Casual or Time Attack mode. Endless is also fairly fun if you’re determined to see just how much insanity you can cram onto the screen (and how hard the Switch can and will try to render that much bus). 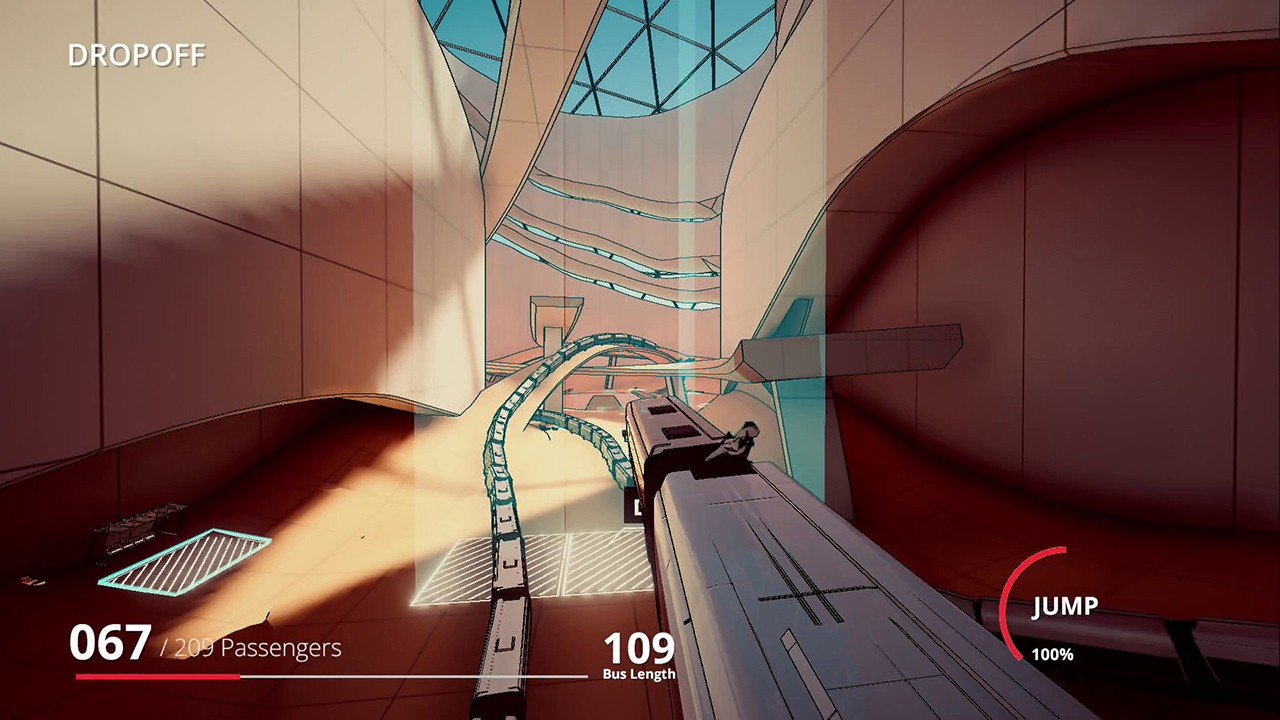 The game isn’t totally without faults, however. This port, which is a combined effort of Stage Clear Studios, Digerati and Stovetop LLC, does have some serious loading issues. Snakeybus does sit at menus between levels for quite a while, and a cold boot of the game seems to take far too long in loading up and drawing everything in preparation for playing. In the same vein, trying to do the Aerial game mode doesn’t feel natural or fun on the Switch. In contrast to the other modes, Aerial asks you to propel your bus through the air with rocket-like propulsion, hitting targets and picking up passengers from floating platforms as well as on the ground, but taking care NOT to touch certain ground areas. This is the only mode that incorporates a separate camera view (which makes sense, given the nature of the gameplay), but it just doesn’t transition well. I lost sight of myself constantly, or crashed into walls that I couldn’t swivel the camera fast enough to see. Whereas other modes and methods came naturally since they all played off each other, Aerial felt like a brand new game that was simply not my cup of tea. That’s not to say it isn’t fun: again, I’ve seen footage of people who create fantastic midair leviathans of bus, and I’m impressed. But it simply doesn’t work for me.

Having said all that, Snakeybus is a grand time to be had for single players who like a seriously strange challenge. It’s innovative on the Snake formula, clever in world crafting and execution, and has a good hook to keep me coming back again and again as long as I remember to stop between runs and not in the middle. Trying to remember where your bus was going an hour ago is a sure fire recipe for frustration. I’m hopeful to see some of this online multiplayer at some point, because that also seems ridiculously fun, but I’m content, for the moment, with the solo experience. Might as well enjoy the ride, even if it’s totally ludicrous.

This bizarre arcade game is charming, looks good and plays well, but is lacking something in the diversity and optimization departments.