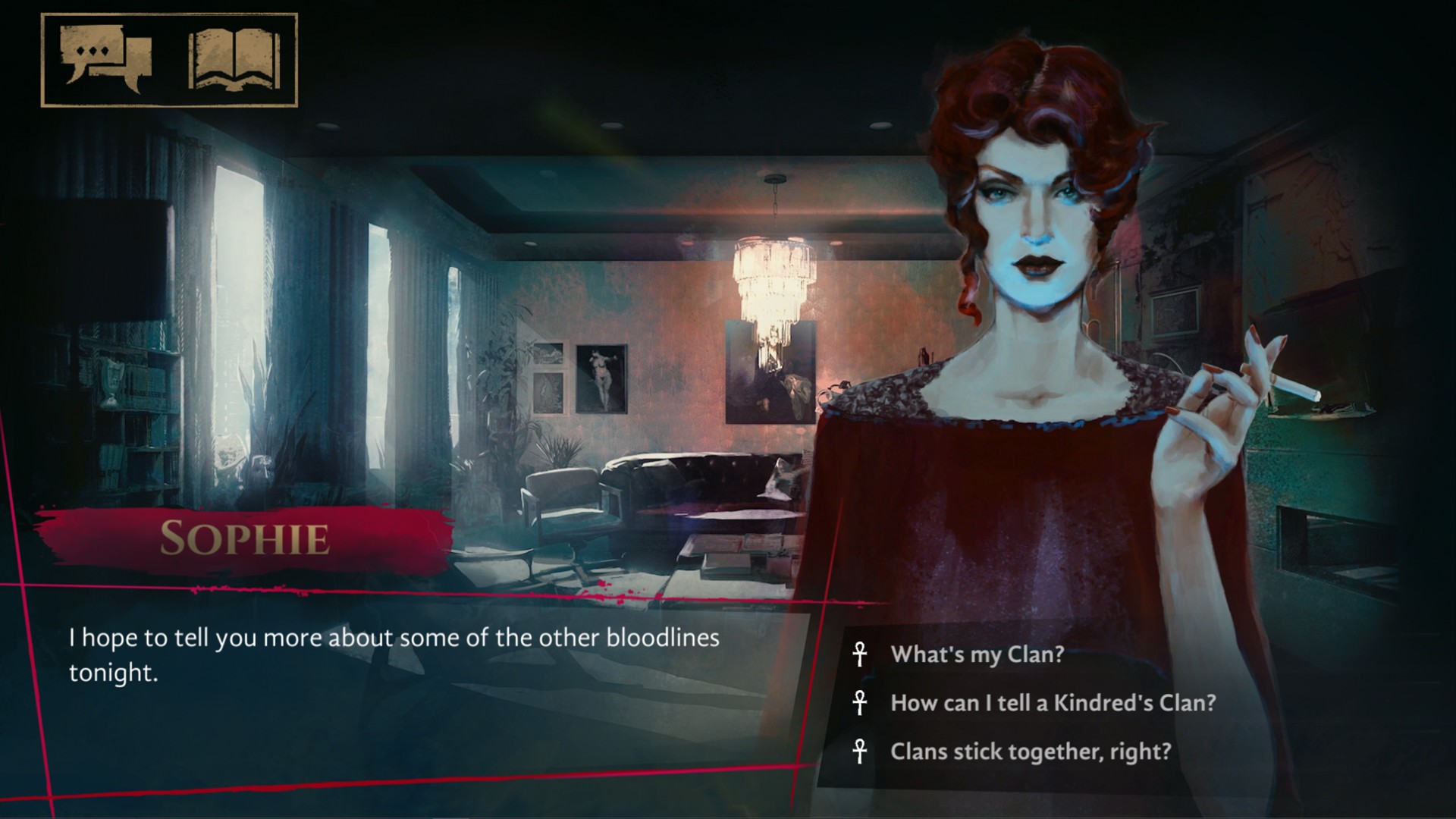 I like the vampire sub-genre as much as the next sun-dodging pasty-faced blood drinker, so when Vampire The Masquerade Coteries of New York came along, I crawled out of the shadows, only to retire back to the sofa to give it a whirl.

Vampire The Masquerade Coteries of New York is a visual novel, and perhaps a paint-by-numbers design in terms of what to expect with gameplay: enter several locations, interact with an NPC, reading through the narrative and replying to dialogue whenever prompted to do so. As someone who doesn’t often play these types of games, I usually find them uninspiring with a lack of any real autonomy of directing the narrative and instead, a passenger to whatever the storytellers want to depict. Ignoring the game mechanics and instead delving into the story, I was seduced within the first five minutes and hesitant to put the game down.

The story itself is a typical factions war between various vampire clans. At the start of the game you choose and name a character from one of three clans: Brujah, Venture and Toreador. Your introduction to the sub-culture is a slow process for your character, realising that their heart has stopped and no longer breathing, that their hunger can’t be satisfied by regular food and that they have a sensitivity to light etc. 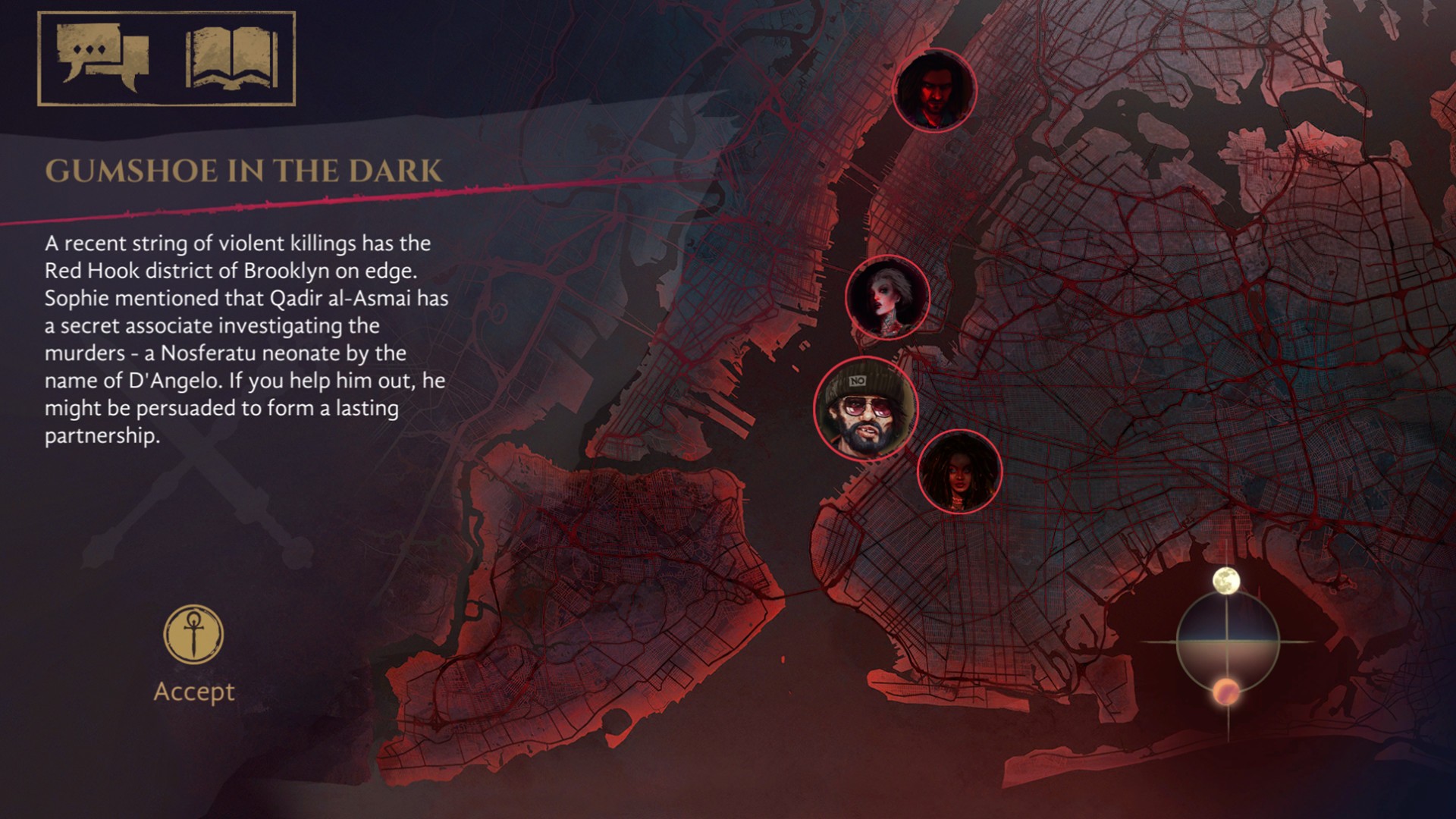 Vampire The Masquerade Coteries of New York is quite possibly the best-written narrative I’ve seen in a game like this. The dialogue isn’t as great – not through poor writing, just some of the brattish characters who have to answer with stupid responses. Sometimes you’re in the position where you have to choose from three different responses, and each of them reads poorly – as in not something you would likely say in a situation. Not speaking from vampire experience, of course, but just natural conversation.

Almost every scene is hand-drawn, or appears that way, including the many characters you come across. These NPCs aren’t animated, but they look the part. The introductory character, Qadir, that drags you into the world with his long hair is fodder for a Mills and Boon book cover (ask your nan). The backgrounds are slightly different though in that they often have an animated area such a lighting effect of sorts that add to the mood without distracting you from the story. This can be said about the music too as it’s never overpowering or cliche.

You see, at its non-beating heart, Vampire The Masquerade Coteries of New York is a story about politics, code and manipulation. You could argue that they are all the same thing to some extent, but the themes cover how you need to follow the rules within society, albeit an undead one, but learn about the rules so you can break them. As we’re all familiar with the vampire mythology, they feed on humans, drinking their blood in the shadows, granting them immortality. Even with their endless lives, the vampires still have unfulfilled objectives, deception and uncertainty, and in some ways, you’re about to milk that.

Earlier, I mentioned that when you start the game, you choose a suitable clan. Nothing is said about it in the clan synopsis, but each of the clans has a power or two. I assumed that Ventrue would have the wealth that would make for an easier game, but instead, their ability is mind control and resilience. Ok, so maybe related to money a little, but the other clans have their perks too such as super strength (Brujah) and super speed (Toreador). My first attempt was with Ventrue, but flirting with the other playable characters, I realised that the other two are more or less the same origin story, but with different powers. 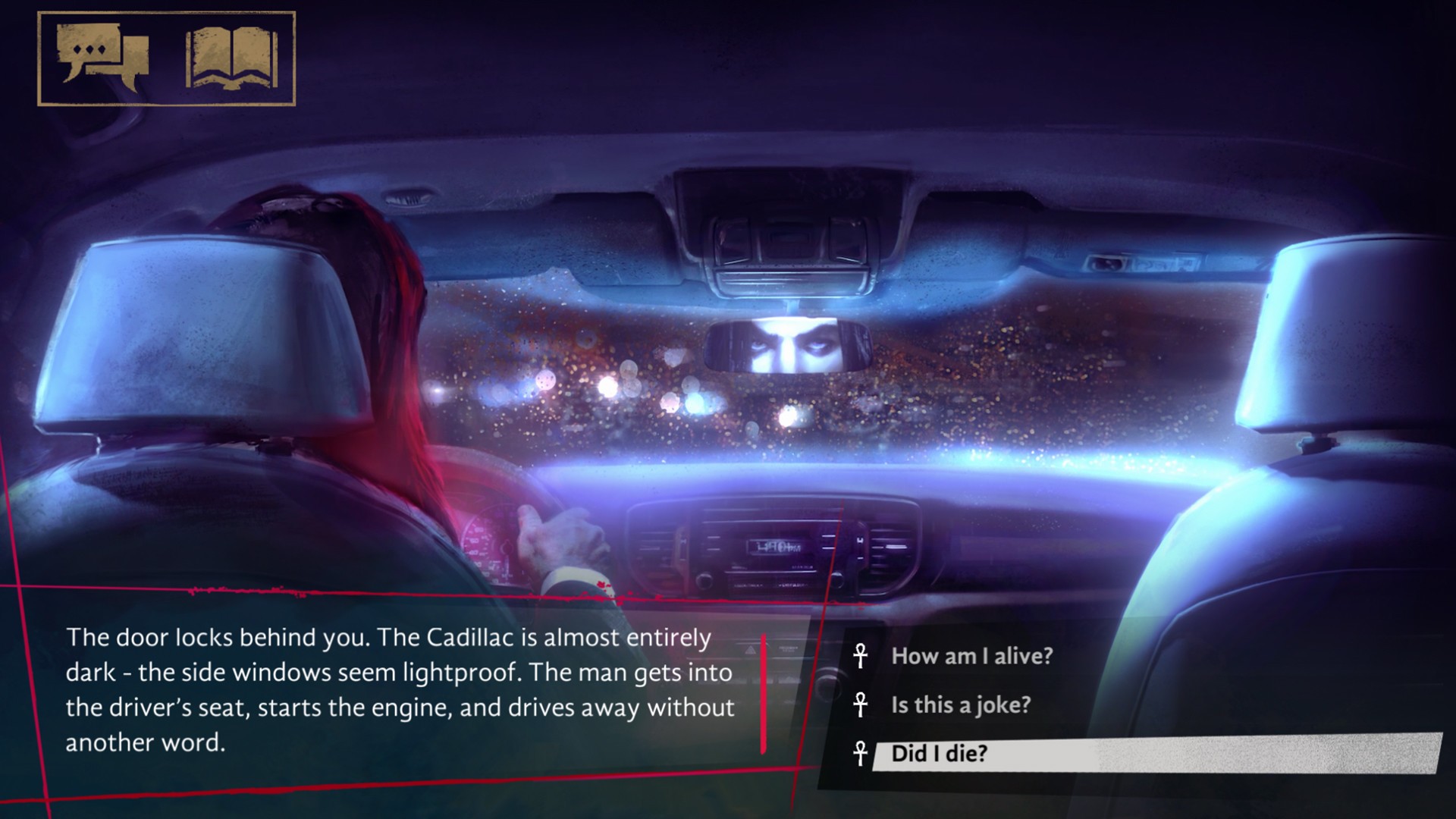 But here’s the important part: do your choices make a difference to the story as it’s one thing having a lower level of interactivity in a game, but considering you have dialogue choices, do they have an impact? Yes, but more to the dialogue than the overall outcome of the story. The dialogue will change its path and will remember the choices or actions you took. In the early parts of my first attempt, I was quite submissive, taking in everything before committing to an action. NPCs would summarise my actions and conversations correctly, but when I played with a different character and was more antagonistic, this was equally reflected in the story. This was refreshing as there have been quite a few games lately where you can select any response and it has zero effect on the outcome, or NPCs don’t acknowledge that you’ve praised or insulted them and instead have a canned response.

On that basis be warned: though you are a vampire, you can die with the wrong response, or have parts of the story unlocked if you don’t follow vampire protocol. Knowing full well of my predicament, I was in a position of life or death and handed an olive branch. Being a little stubborn and expecting everything will be ok, I did nothing. This resulted in my subsequent death; confirming there was no afterlife, just a black void. Harsh. I promptly learned my lesson and this time around made sure to save regularly. But wait – there are no save points, only when you exit out of the game. It’s a little similar to that other vampire title, Vampyr, only in Vampire The Masquerade Coteries of New York you can have three games on the go at one, just in case you can’t make your mind up on one clan and philander with them all.

As you’re not required to have lightning-fast reactions for the game, you can learn from your past mistakes and avoid them the next time around, but in Vampire The Masquerade Coteries of New York, there are many optional quests and paths to take that the life of a vampire won’t be so short-lived. Do you consume humans at every given opportunity, or do you avoid them, succumbing to the inevitable beast? That’s not a play on words, as the beast mode, unlike the Yakuza series is the primal part of being a vampire and can fundamentally change who you are. There’s a lot covered in the game. While a lot of it is common sense, there’s an in-game dictionary you can refer to by pressing ZR. If you need to backtrack on some dialogue, ZL and a transcript displays should you forget what was said or you accidentally press the A button and skip some vital information.

Vampire The Masquerade Coteries of New York is an excellent portrayal of high society – in this case, vampires co-existing with you humans. While I love to read and can easily get lost in a book without fail, seeking out a visual novel isn’t really on my to-do list. I prefer something much more engaging – that is, interaction like taking control of a supercar, jumping over spikes or punching a random henchman in the chops. To counter this, Vampire The Masquerade Coteries of New York is engaging. The story is enjoyable, incredibly well written and surprisingly varied with multiple paths. With the three different characters who play quite similarly to one other, it’s quite likely that you’ll replay this if you enjoy it the first time around. The most significant criticism, however, would have to be the save system as you can’t manually save and once you die, can’t retrieve a previous save point.

Despite having a mild distaste for the slow-paced visual novel, Vampire The Masquerade Coteries of New York uses its vampire-like level of seduction to lure me in and endorse this title as a very well written narrative. A must for visual novel fans, and perhaps the game that lures you in for the genre curious.