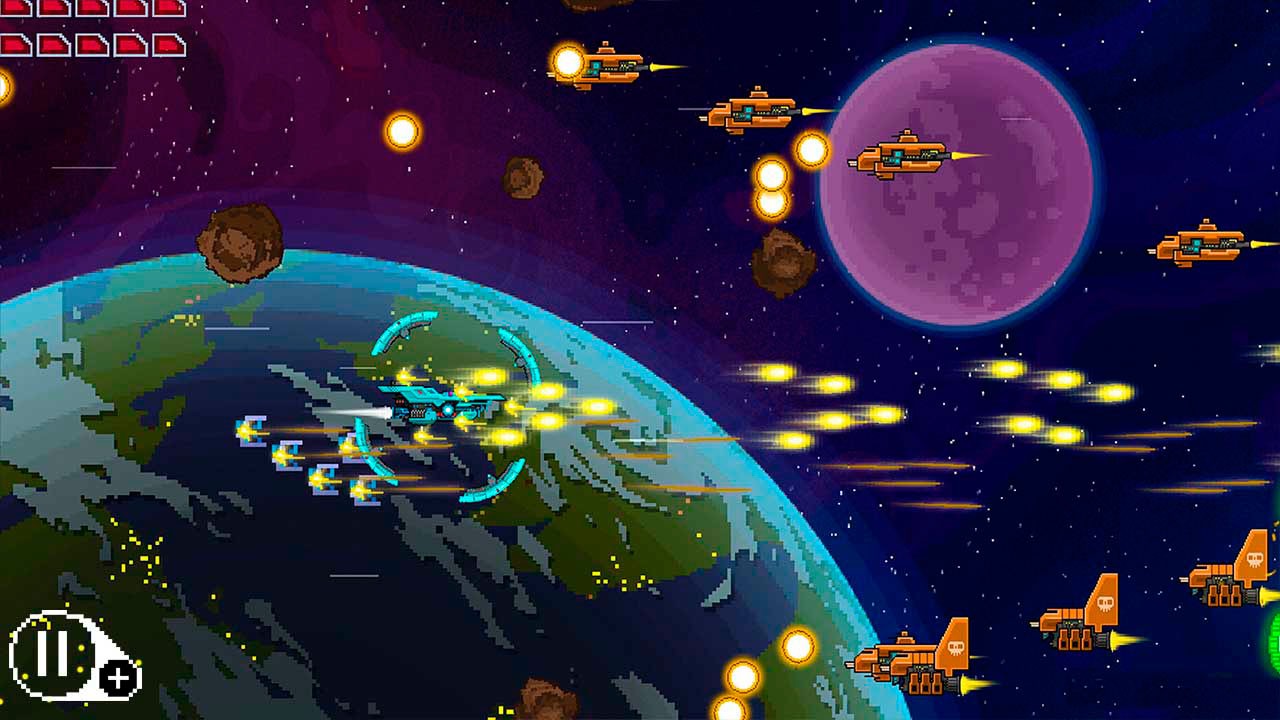 If you have fond memories of side-scrolling shoot ’em ups such as R-Type, then you’re likely to find Galaxy Warfighter near the top of your list when hunting for a new shooter on your Switch. Very much like the arcade classics of yesteryear, this is a stripped-down action title, though it does feature an upgrade system common in modern games. Is it any good?

First of all, what can be said about Galaxy Warfighter that differs from similar titles? Not much. You can dive straight into the action without any setup or tutorials. Select ‘launch’ from the main menu screen, and away you go. After a brief loading screen, you’re up against the waves of enemies, fighting a boss at the end of each stage, to then progress onto the next.

Something you’ll notice almost immediately is the default auto-fire. In Galaxy Warfighter you don’t need to press any buttons as it’s all done for you. Regrettably, there are no other buttons to press; no focused attacks or splash damage, just an endless spray of uninspiring plasma balls filling the screen. On that basis, the skill solely lies in how you control your ship. Using either the stick or d-pad to can position yourself at the top and bottom of the screens or manoeuvre between waves, but you can’t turn back. There are a couple of moments where a boss gets past you. Without any way of turning around, you concede that you’re going to have to redo the level 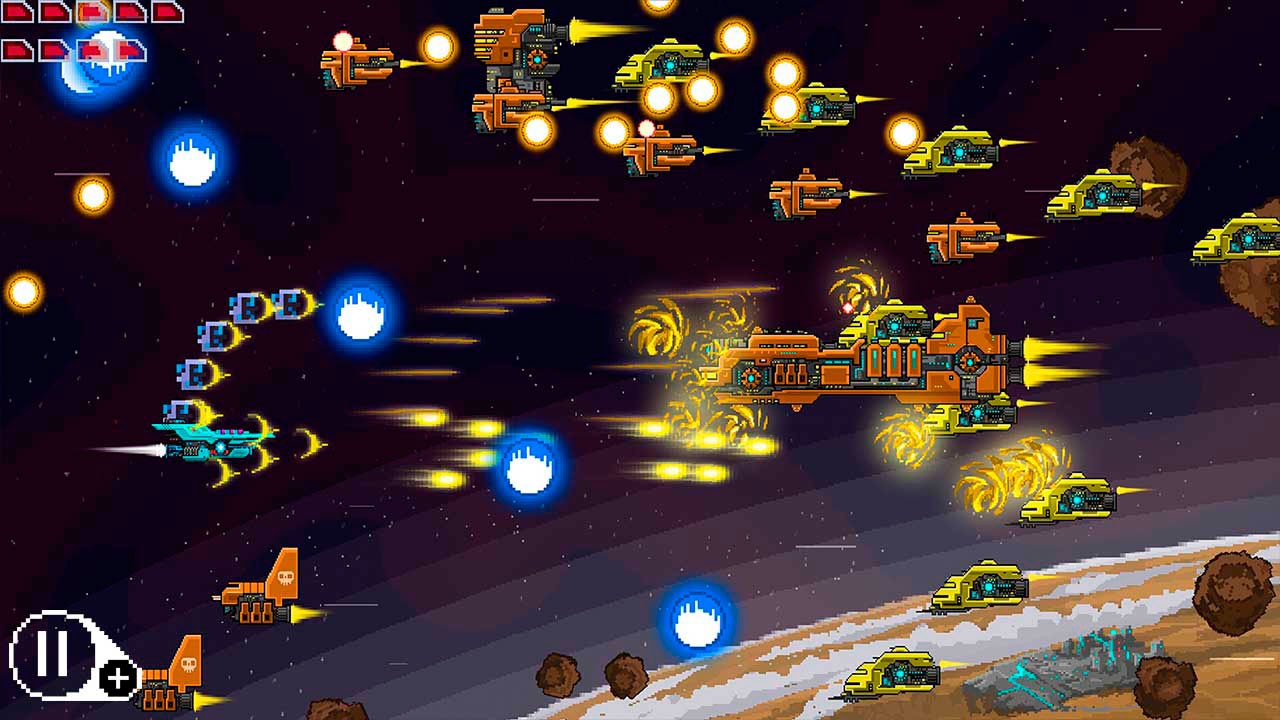 We’ve established the controls are simple. Are then any redeeming points about the game? Yes, and this is what saves a mediocre game into being a little bit more above average: the upgrade system. Through each successful fit on an enemy ship, you get awarded a single credit – accumulate enough of these, and you’ll be able to upgrade your ship with a variety of options from defence to attack, and that includes firepower, shields and drones. Even at the start of the game, the cost of these items are relatively high, so you need a good amount of credits before you see some changes. On this basis, I allowed myself to die each time I got to a boss so I could grind the credits a bit more and unlock new goodies as unfortunately, you can’t repeat a level, only if you die.

After a few attempts, I took my first leap of faith and upgraded the attack power of the ship. Following a couple more attempts after that, I was able to unlock a further two upgrades. This didn’t make an impact on the standard waves as they can mostly be one-hit, bosses were being obliterated in seconds. While I enjoyed this brief moment of overpowering, it got old quick, and then Galaxy Warfighter became a grind – in the chore sense, not because I was eager to win new goods.

Before I upgraded the attack power, I was finding that on occasion I would get through a wave (only a couple of minutes at a time), then end up being killed by a boss. Rather than respawn from a checkpoint, as the levels are so short, you have to start again. At first, this was annoying, but you can get back to your place pretty swiftly and in the meantime, grab more credits. There’s no game over or ‘insert coin’, just rinse and repeat. 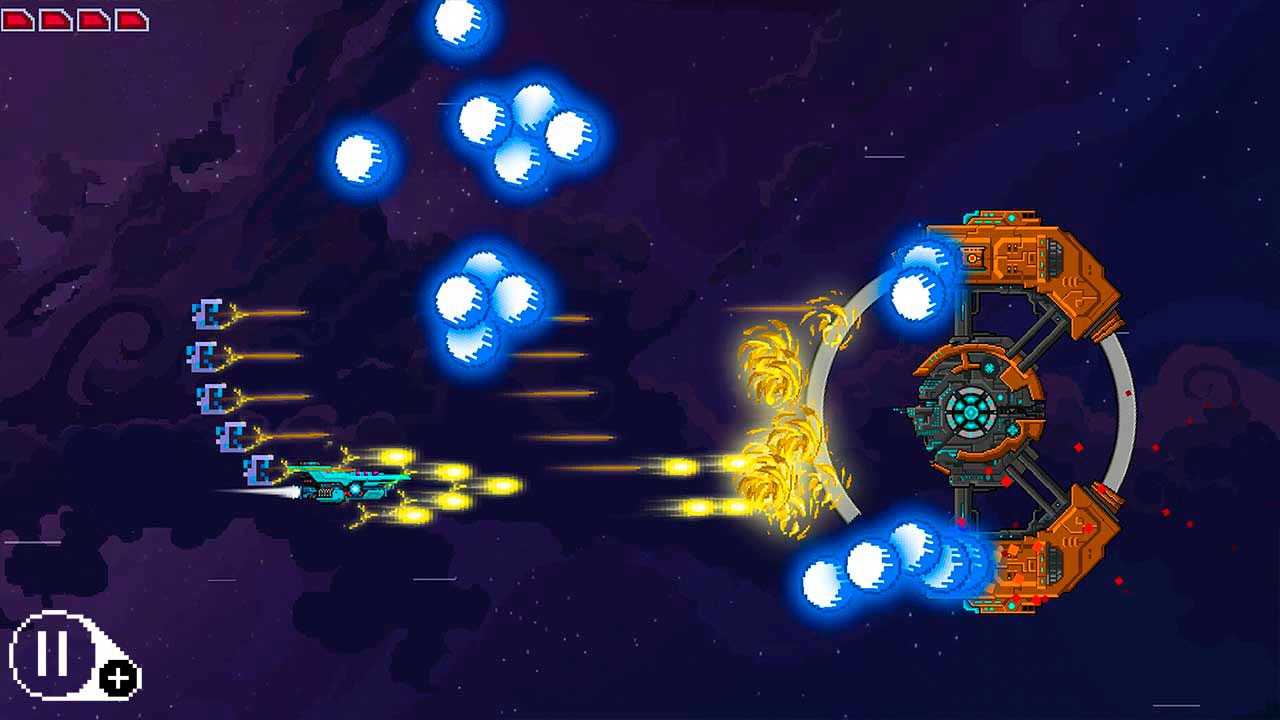 It got to the stage where I didn’t need to grind the game as the attack power was adequate – instead, I upgraded a few other attributes such as armour (the number of hit points I had), shields and the drones among others. The drones are a bonus as they hover around your ship shooting the same time as when you do. Galaxy Warfighter never feels overwhelming, but there are a few moments of bullet hell with some of the bosses, albeit, a slow-motion version almost as you can avoid practically everything.

So we come to the presentation. The opening sequence was a bit flat. The graphics were a pixel art effect that looked like any other game, but the moment the ship launched, the viewpoint changed and to be honest, it looked like a 16-bit version of Defender (a good thing in my book). Enemy ships tend to be the same ship for a wave, then ships from previous waves are introduced. Though the models are ok, it gets incredibly samey, and therefore quite dull. You could cast your eyes to the background, but for a game where you’re flying a spaceship, supposedly at ridiculous speeds, it feels like you’re hovering in space at the scenery is unchanged. On top of that, the soundtrack appears to be just one instrumental and boy is it repetitive.

It got to the stage where Galaxy Warfighter no longer felt like a game and felt more of a task I had to get out of the way so I could move onto something I could enjoy. That’s a disappointing statement to make as I was looking forward to playing it. Judging from the visuals and gameplay screenshots, Galaxy Warfighter is the type of game I like to play. However, being unable to control when and what I’m shooting, no variation in controls and a monotonous soundtrack and style of play, Galaxy Warfighter is not a title I’ll be coming back to. Don’t misunderstand in that it’s a terrible game with so much wrong with it; it’s just uninspiring and repetitive. If that appeals to you, then you might enjoy it, but I like a bit more control in these type of games.

Auto-fire enabled shoot ’em up that looks good and has a redeeming upgrade system that pumps a little more life into the title, but not enough to offer mass appeal or replay value. If you’re a die-hard fan of shoot ’em ups, you may be able to see beyond the lack of controls and repetition, but for everyone else, an average shooter.