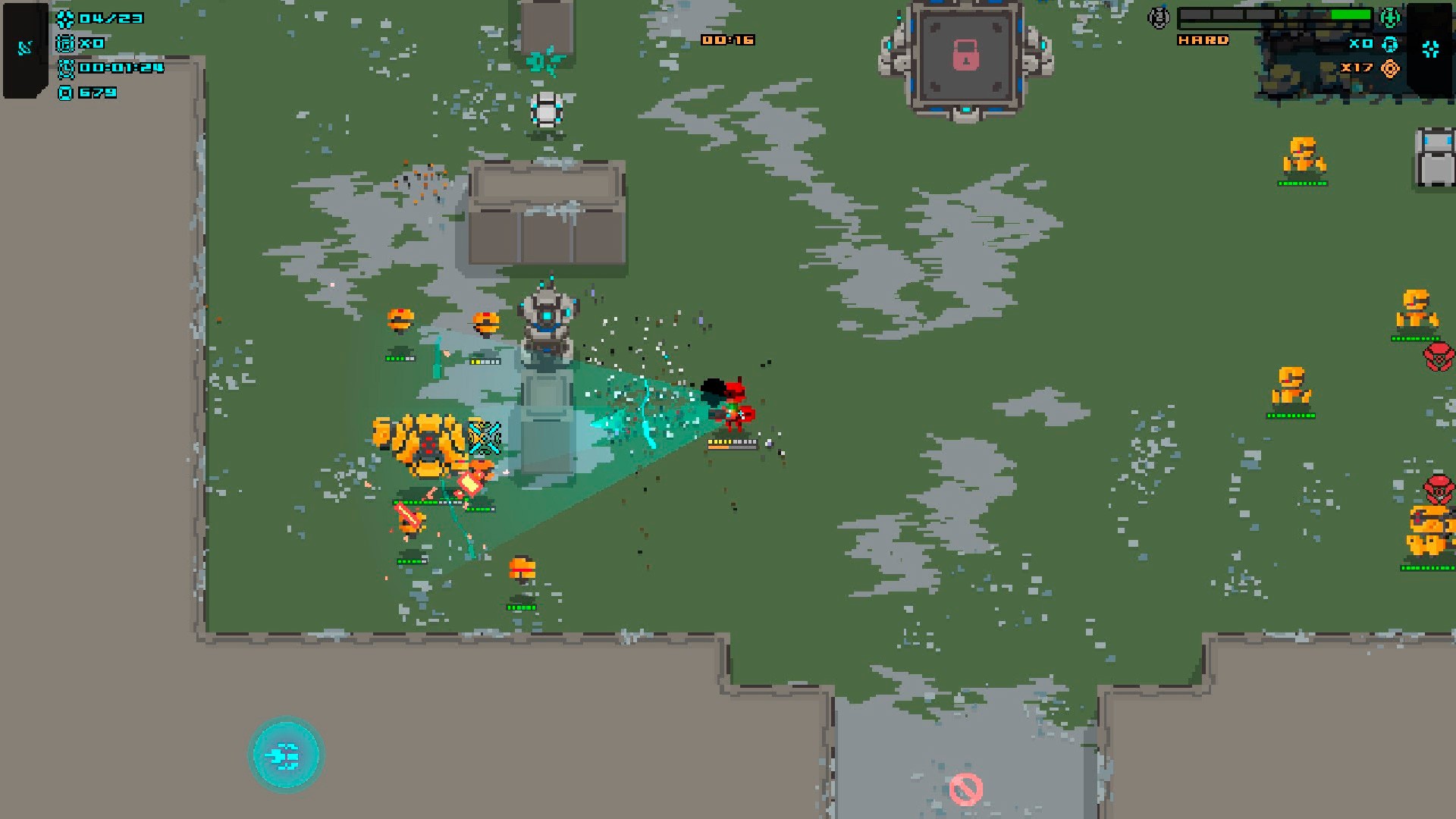 Twin stick shooters are ten a penny nowadays, across all formats, which is no bad thing as long as those games are exciting and entertaining. Rush Rover is the latest entry into the genre thanks to Ratalaika Games. Generally these kind of titles are fun for five minutes, before the repetitiveness of constant moving and shooting sets in. Hopefully Rush Rover will be one of the more enjoyable entries.

Rush Rover is a twin stick shooter played from a top down perspective. You play as a Rover, which is basically a robot with weapons You move around randomly-generated levels shooting enemies, picking up loot and upgrading your weapons. In terms of a plot, Rush Rover is contained within the Rush Over universe. Intelligent robots and mining has taken over every known galaxy, these robots became more intelligent and decided to branch out on their own. After the war of independence against humans, these intelligent robots then decide to take over everything and begin hacking robots. Luckily, your Rover has yet to be infected and must survive as long as possible. 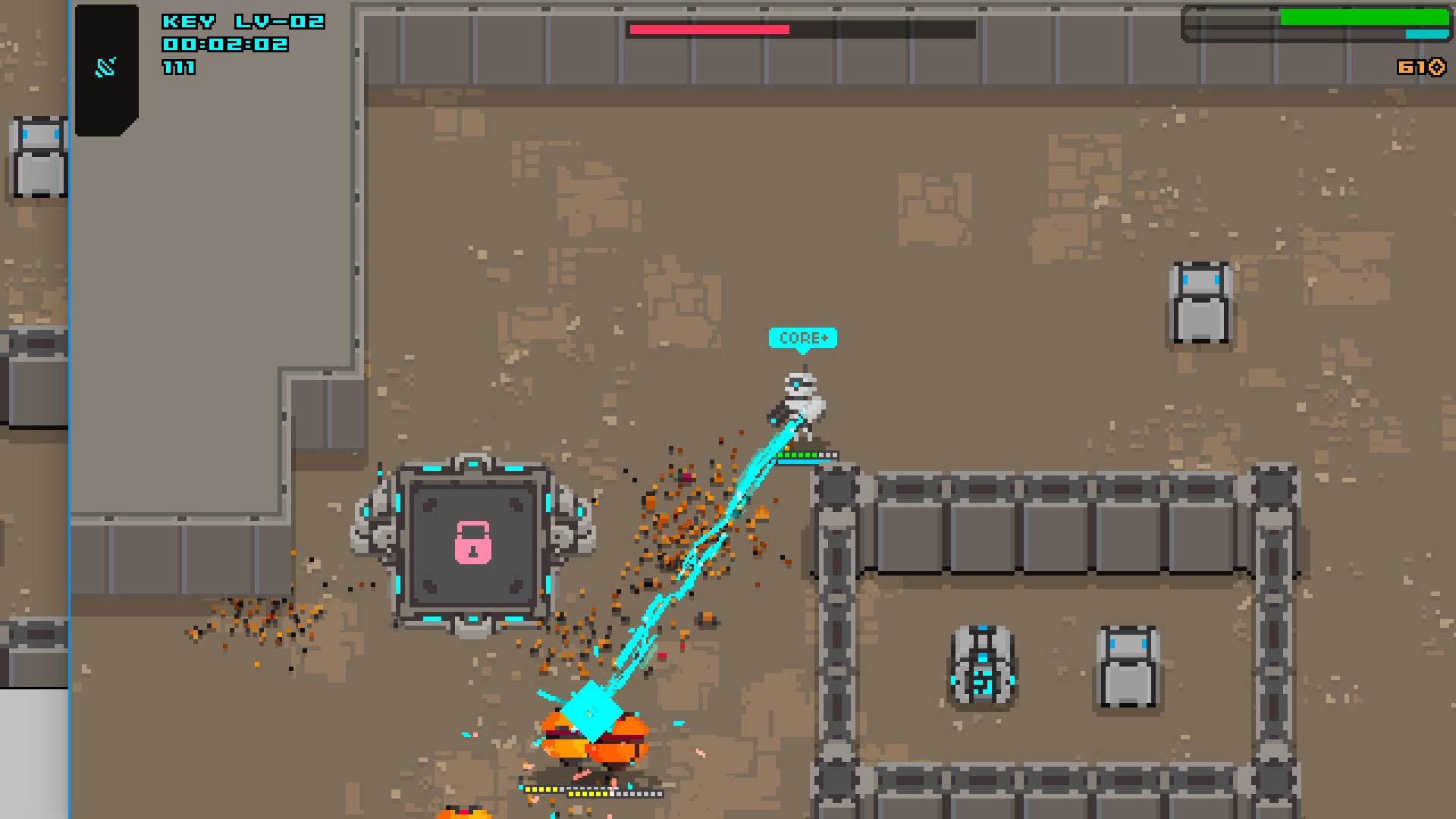 You start off each level in a safe zone containing a few objects and a machine that can upgrade you. Bear in mind the levels are randomly generated, so each game in Rush Rover will be different. You then have to move into the next zone which will contain enemies, for a small period of time there is a Blitz period where there is a timer, the idea is that you destroy the enemies before the timer runs out. If it does run out it doesn’t really matter, if you do you get a little comment stating you have completed the Blitz. If you get through a zone unscathed you also have that mentioned. You move your Rover around the level and take on various enemies, at the start there are only a couple of enemy types which are fairly easy to beat. There are boxes which can be blown up, those and enemies leave behind a variety of collectibles which are not really explained. Some of these will be new weaponry replacing what you have, you drop what you are holding. You have some help from a secondary pulse weapon which you don’t have control over, this is also up-gradable. There will be some levels which have no enemies, as they are randomly generated you can’t really plan ahead. Before entering a level it will indicate how hard it is i.e. Level 4 will be harder than a Level 3 zone. Some of these levels can only be unlocked using key cards, thankfully there is a transfer portal that you can access to help you automatically jump to a level you have already visited instead of moving back through them again, some levels could have up to 3 doors to choose from.

The enemies are reasonably varied, as you progress it will turn into the bullet hell you expect it would. Things can get very intense in Rush Rover, as multiple enemies seek you out. Due to the randomly generated nature of Rush Rover, you may or may not be suitable kitted up to take on the increasing hordes. If you’re lucky you’ll have suitably upgraded your statistics, you may have also been fortunate enough to find a weapon and pulse weapon that makes it easier for you to slice through them such as the laser or flamethrower. There are boss levels, again you will have no idea what you will be up against but usually you can hide behind something long enough to beat most of them in a reasonable time. You only get one life in Rush Rover, so if you die that’s the end of your run. It adds an urgency to the situation should you suddenly find yourself low in health and the enemies keep coming as you look to find some health. There is also another mode where you must survive as long as possible without weapons, it’s ok the first couple of times you play it but not as much fun as the main game. 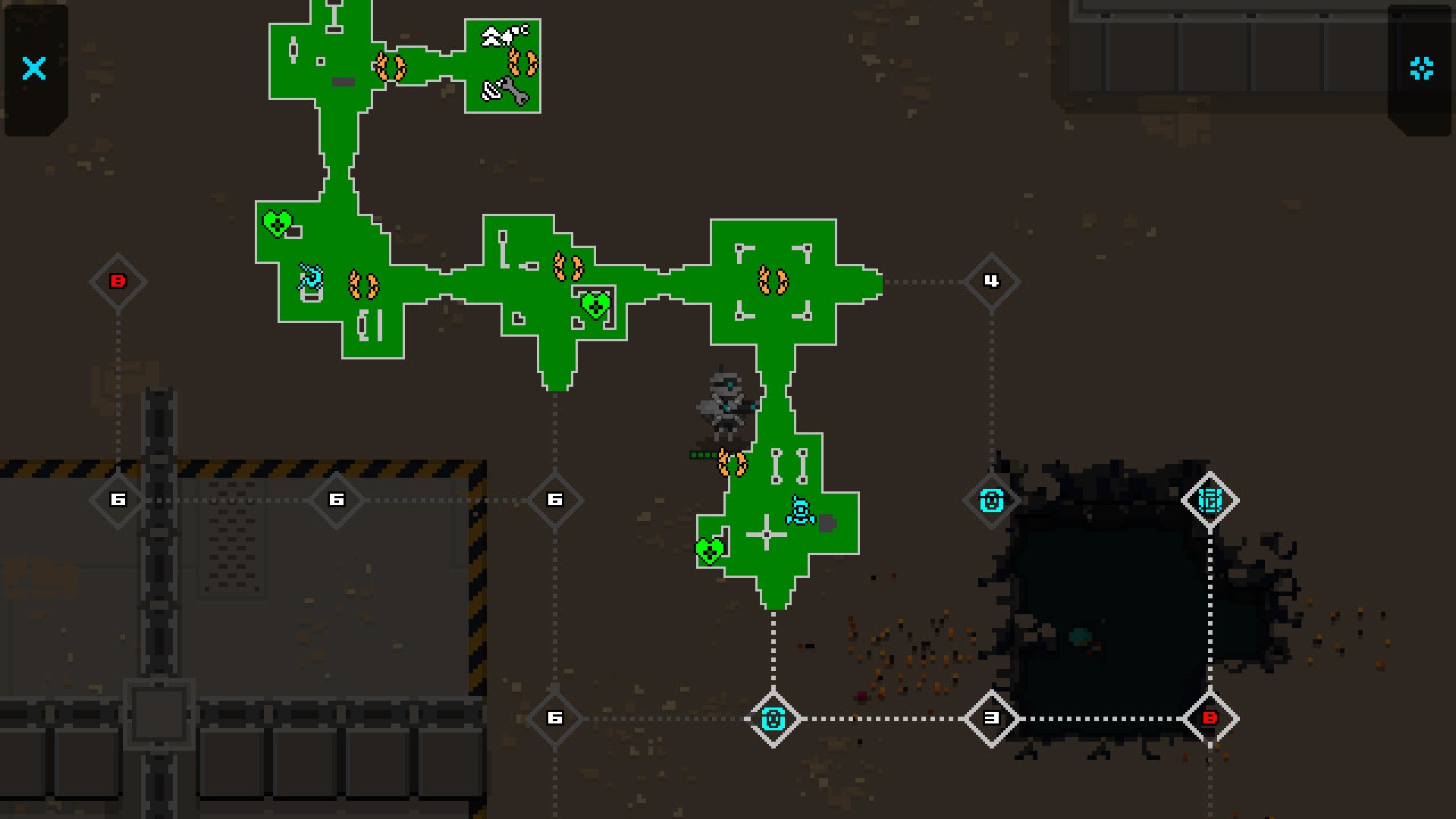 Rush Rover is a fun game utilising chip tunes and nostalgic early nineties pixel art graphics, like most randomly generated games irrespective of the genre there is no end in sight, so you just play until you get bored which could be an hour as Rush Rover can be addictive if you’ve started well finding some good weapons. With a bit more of a story and direction Rush Rover could have had many of gameplay but as it is, it just lacks that little something to keep you interested for longer than that first hour. The map that is included is reasonably helpful and presented in a simple way, but like most of Rush Rover, style is not what it is aiming for but without a goal there isn’t a great deal of substance either.

Rush Rover has a few positives, it can be an entertaining shoot em up as you blast your way through levels but without an aim or end game in mind, it’s difficult to keep going back. If you like twin stick shooters or a title that is easy to pick up and play then Rush Rover will give you an hour or two of fun, however once that hour is up you won’t be rushing back and you’ll simply move onto something else.

Rush to the assistance of the Rover in……….. Rush Rover!