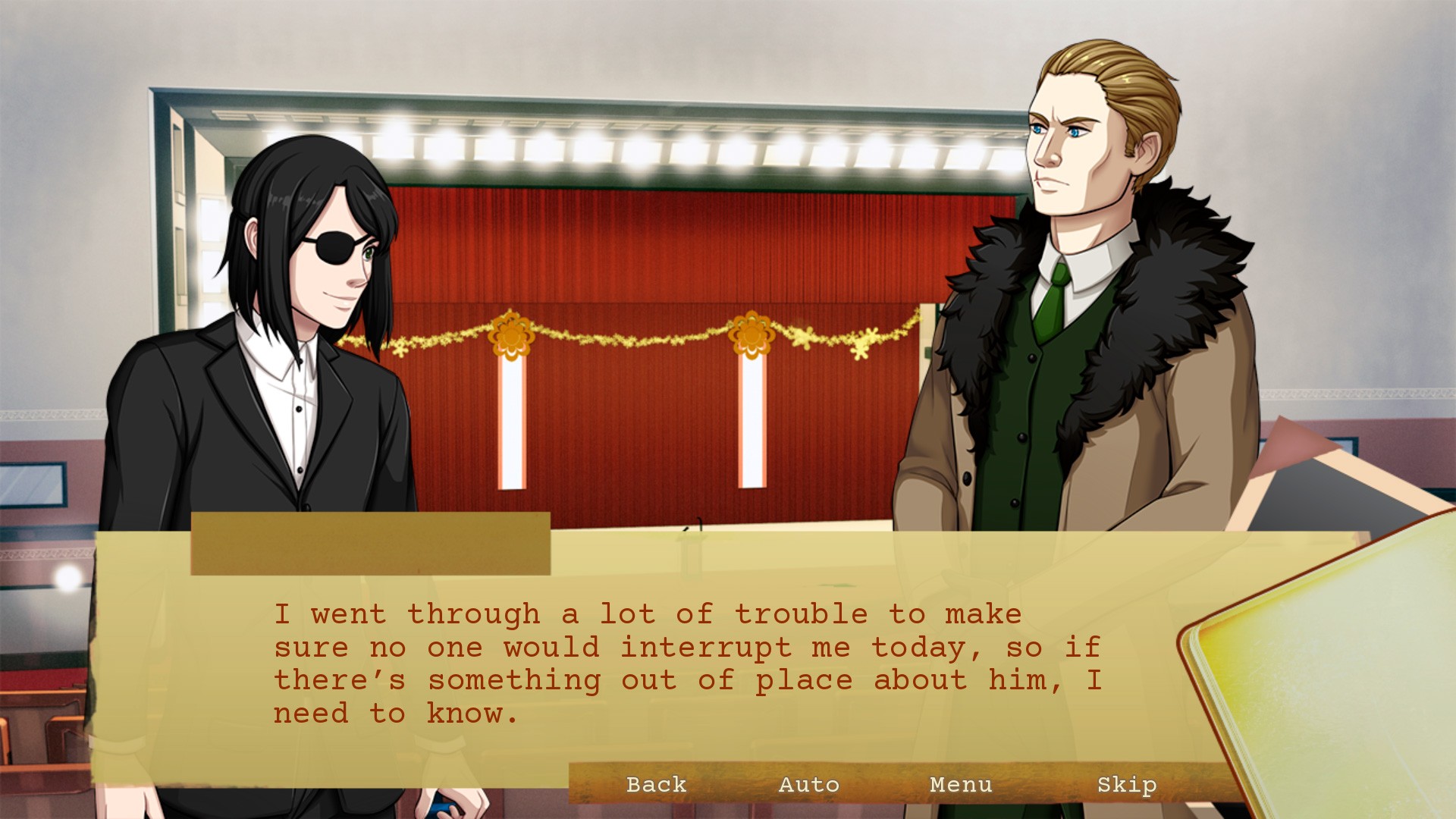 Syrup and the Ultimate Sweet was released a few weeks ago, a visual novel game where you have to make choices to push the story along. This time around Blind Men is the latest visual novel release from Ratalaika Games. The Visual Novel genre has a very healthy following in Japan but hasn’t really caught on in the UK yet, Steins Gate probably being the best example of a visual novel game doing well over here. Ratalaika Games appear to be focusing more on releasing visual novels so let’s see how Blind Men turned out.

You play as Keegan in Blind Men, a boy who was raised by his retired super-villain uncle after a car crash took his parents lives and also his eye (Keegan wears an eye patch now). Keegan has enjoyed listening to his uncle’s stories and the wealth he has attained so decides to follow in his uncle’s footsteps. However to be a super-villain he needs to join the correctly titled League of Evil. Unfortunately this requires Keegan to prove himself worthy of such a group and must commit a crime of suitable standing before he is recognised as being accepted into the League of Evil. This is where the choice in Blind Men comes into play, you have a choice of two crimes to commit. 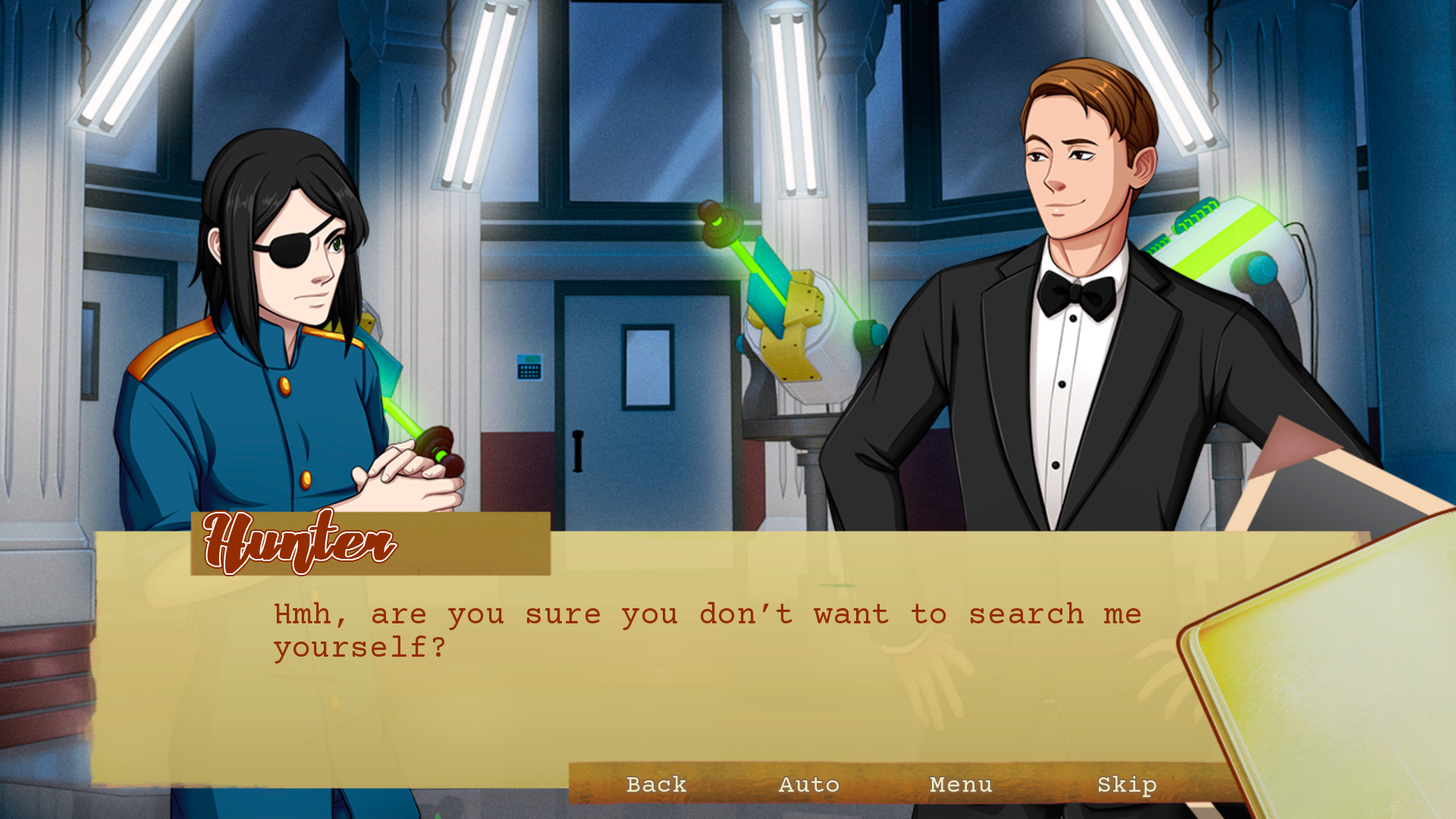 Generally with visual novels they are very plot led with minimal interaction and this is the case with Blind Men. There are reams of dialogue involving multiple characters but you only have control of Keegan. Blind Men is one of less choice driven visual novels you come across, there may be around 8 or so choices you will need to make during your playthroughs, a lot of it is dependent on your choices you make. You only ever have to decide between two options, for example right at the beginning you decide that your crime that will qualify you for the League of Evil is between robbing a diamond or kidnapping a professor. Unfortunately having such a lack of options in Blind Men does limit the amount of enjoyment you will get out of playing it. Other Visual Novels have one or two other things you can do but that’s not the case with Blind Men, you read the reasonably interesting dialogue then make some choices from the fairly small set of options.

The longevity of Blind Men is through the eight endings you can view. Like most visual novels you can skip dialogue you have already viewed before, you can actually skip through it without having played it. This means that the first play-through will take roughly 30 or so minutes if you take your time, but it’s entirely possibly that you can view every ending in under twenty minutes depending on how you want to tackle Blind Men. 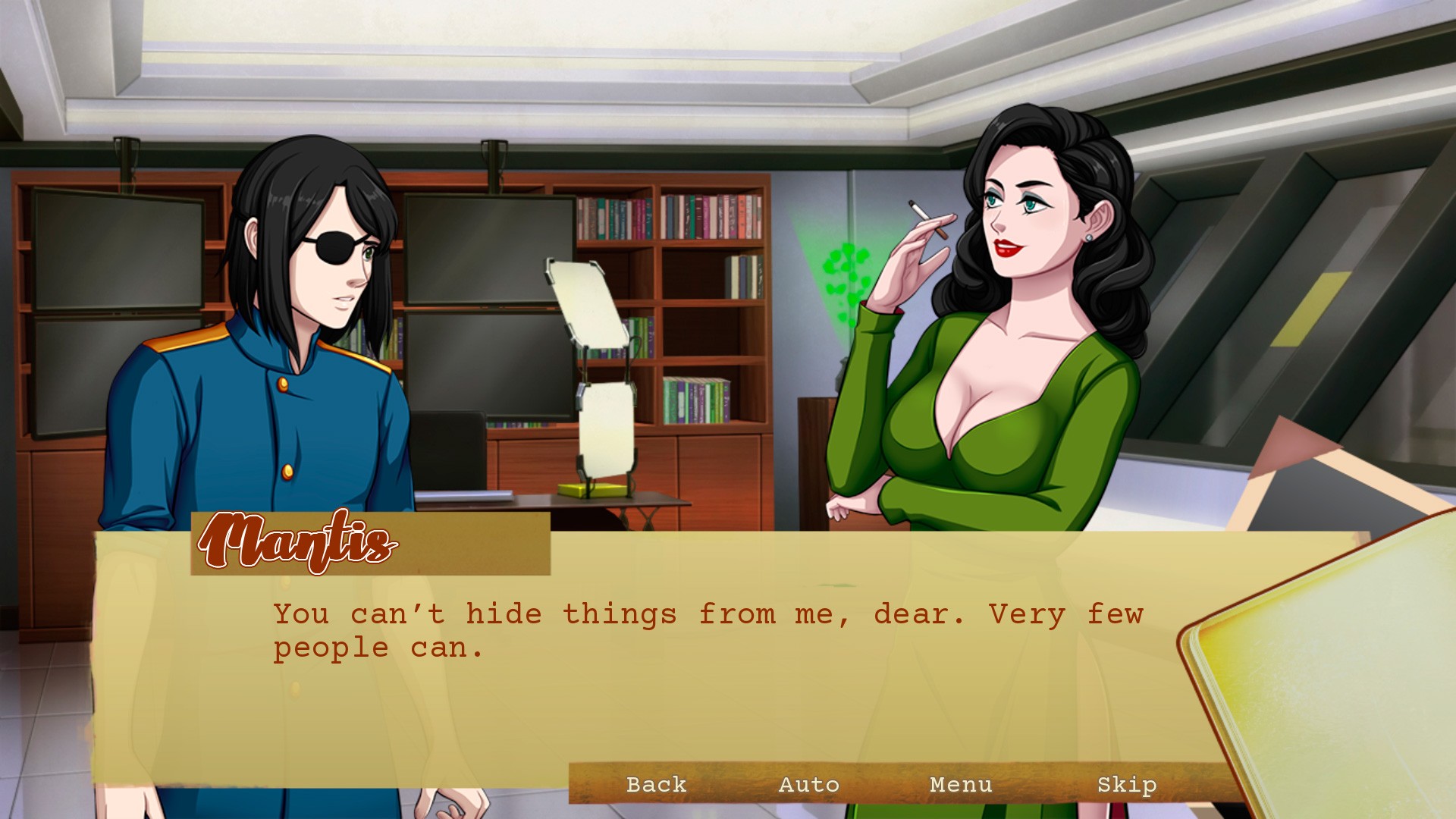 Blind Men visually comes across quite well with a reasonably polished feel to it but it is basically a series of still pictures with dialogue bubbles. Dialogue wise Blind Men is ok, there is the odd grammatical error but nothing that makes it hard to understand. The lack of voices besides some random Spanish words in Blind Men is something that is not unique in the visual novel genre but stands out more in short games. Musically Blind Men is fairly forgettable, with such a lack of interaction and the fact you can skip through means the music doesn’t really add any ambiance to Blind Men. The plot includes some romance whilst you’re committing the crime but again because Blind Men is so short there isn’t enough time to get you fully engrossed into the story.

Blind Men is a pretty average visual novel game. There’s not much to do besides reading the dialogue and making simple choice to move the story along. If you’re a visual novel aficionado then you’ll find Blind Men quite mundane, if you’re not and fancy trying the genre out then Blind Men might be something that could ease you in with its simple mechanics. There are many better and more involving visual novels out there than Blind Men, it unfortunately just plays like a short but uninteresting story.

Keegan needs to commit a crime to join the League of Evil, which is it going to be in Blind Men?