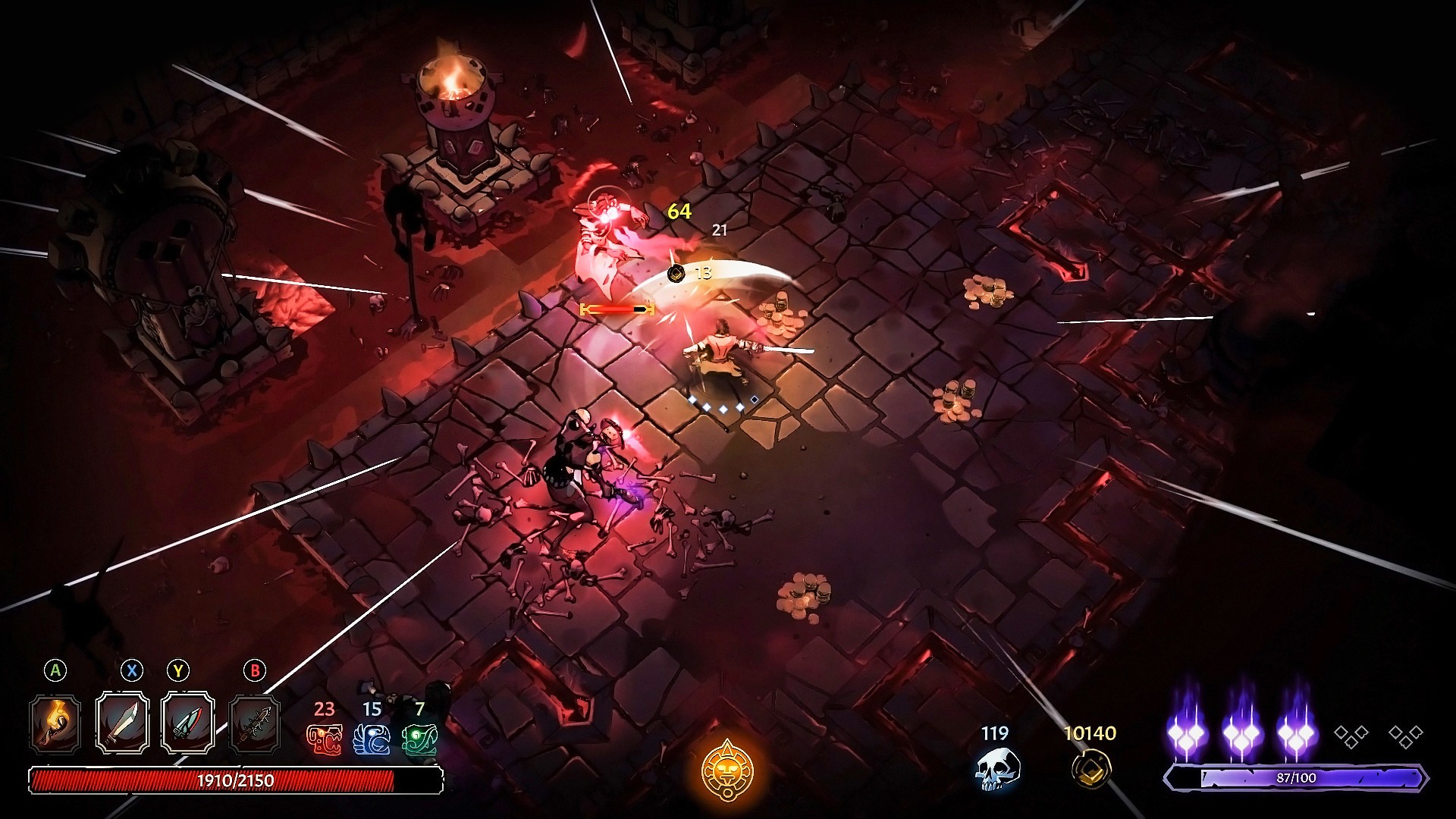 Curse of the Dead Gods is yet another roguelite that has hit Steam’s Early Access. Yes, I know what some people might be thinking already, we already have plenty of those, so what does this one bring to the table that makes it worth checking out? Well, for starters, the whole setting and aesthetic seem to be heavily inspired by Aztec culture, which isn’t something that we seen explored that much in games, especially in this genre, and within that context the game does provide some interesting unique mechanics that should provide a fresh spin on the genre’s formula.

Despite its striking art style and influences, Curse of the Dead Gods doesn’t have a story, at least not at the moment, you’re just thrown right into the action. There’s also no real tutorial, but the game is structured in a way that it gives you enough room to breathe on your first runs as you try to get a grasp of the mechanics. Much like games such as FTL and Slay The Spire, in Curse of the Dead Gods you’re supposed to play through the game multiple times, and each time you get to pick what path you want to take in a map that tells you what type of rewards that you can expect from each room along said path, so you can avoid going into a challenge level if you feel like you’re not ready yet.

What tends to make this kind of games really appealing is their combat system, and while Curse of the Dead Gods fares decently enough in this department, you might still come walking out of it wishing for more. Unfortunately, there’s currently not much in terms of weapon variety, but that doesn’t stop the combat from being fun. Hitting enemies, no matter if it’s with a melee attack or a ranged attack feels great. Both the sound and the visual cues are on point, but it’s the heavy weapons in particular that give you that feeling of wielding something that has a lot of weight to it. 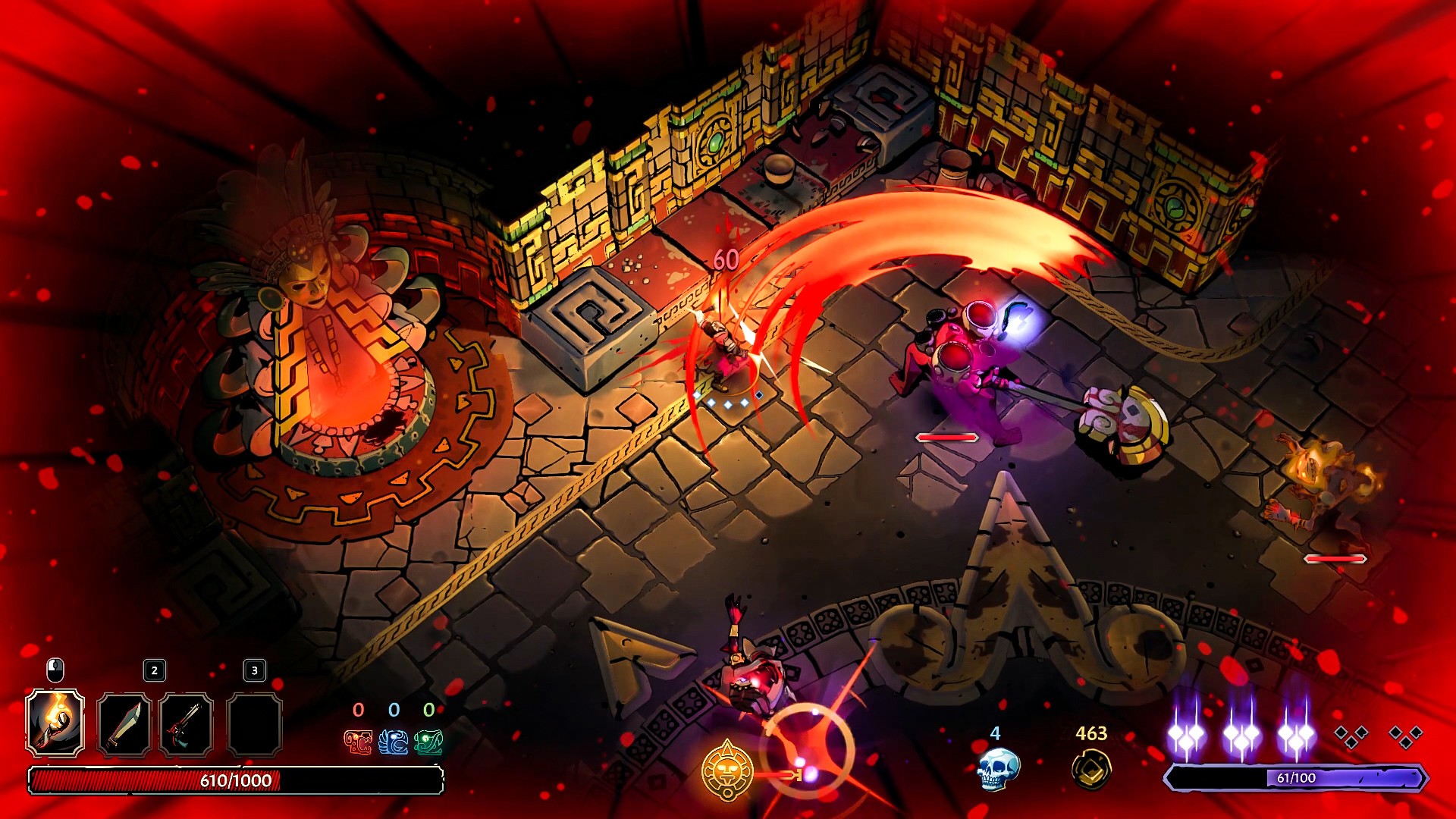 While it definitely feels great, there’s actually not much going on for the combat in terms of complexity, it’s surprisingly fairly simple. There are melee and ranged weapons that you will find throughout your runs with varying stats and modifiers, and you can always carry with you a main melee weapon and a ranged weapon, as well as a heavy weapon that can be both melee or ranged, like a war hammer or a bow. Each of these allows you to execute simple attacks or charged variants that require stamina, and you have to balance a limited pool of stamina between ranged and heavy attacks, as well as the ability to dodge. There are also melee combos which are actually quite important, as the higher they go the more gold you earn and the more you get healed.

At the end of some levels, you can use gold to purchase weapons or relics that provide significant passive bonuses, like increased damage or gold found, or, if you don’t have enough gold, you can sacrifice blood in exchange for these relics. This leads us to the game’s main unique mechanic, the corruption system. By sacrificing blood, getting hit by certain enemies, purchasing relics, and every time you move on to a new level, you gain corruption points, and every 100 corruption points you gain a curse. There are multiple curses that you can get, and while there are ways to lower your corruption level, the only way to remove a curse is by slaying a boss.

For the most part, curses do really change how a normal playthrough would normally play out. For instance, there’s this one curse (can’t remember the name) where enemies will drop blood and heal you when they die, instead of dropping gold, and this scales up if you manage to keep the kill counter up. However, there’s another curse that makes it so that consuming blood actually increases your corruption, so if you happen to have both of these at the same time, then you’re in for a rough time. Ultimately, this makes it so that you really have to consider if items you take are worth it, and you have to do your best not only to not get hit so that you don’t lose health but also so that you don’t become corrupted.

Enemy variety is also another point where the game seems to be lacking. There are quite a few enemies and bosses in the game right now, each with their own set of outlined attack patterns that you must learn to avoid by rolling out of their way or by parrying them, but you can only face these a certain amount of times before everything starts to feel the same. Likewise, the game has you going through a series of rooms, and I think this is also another point where the game seems to lack, it doesn’t feel like it has enough room types to keep things engaging in the long run. 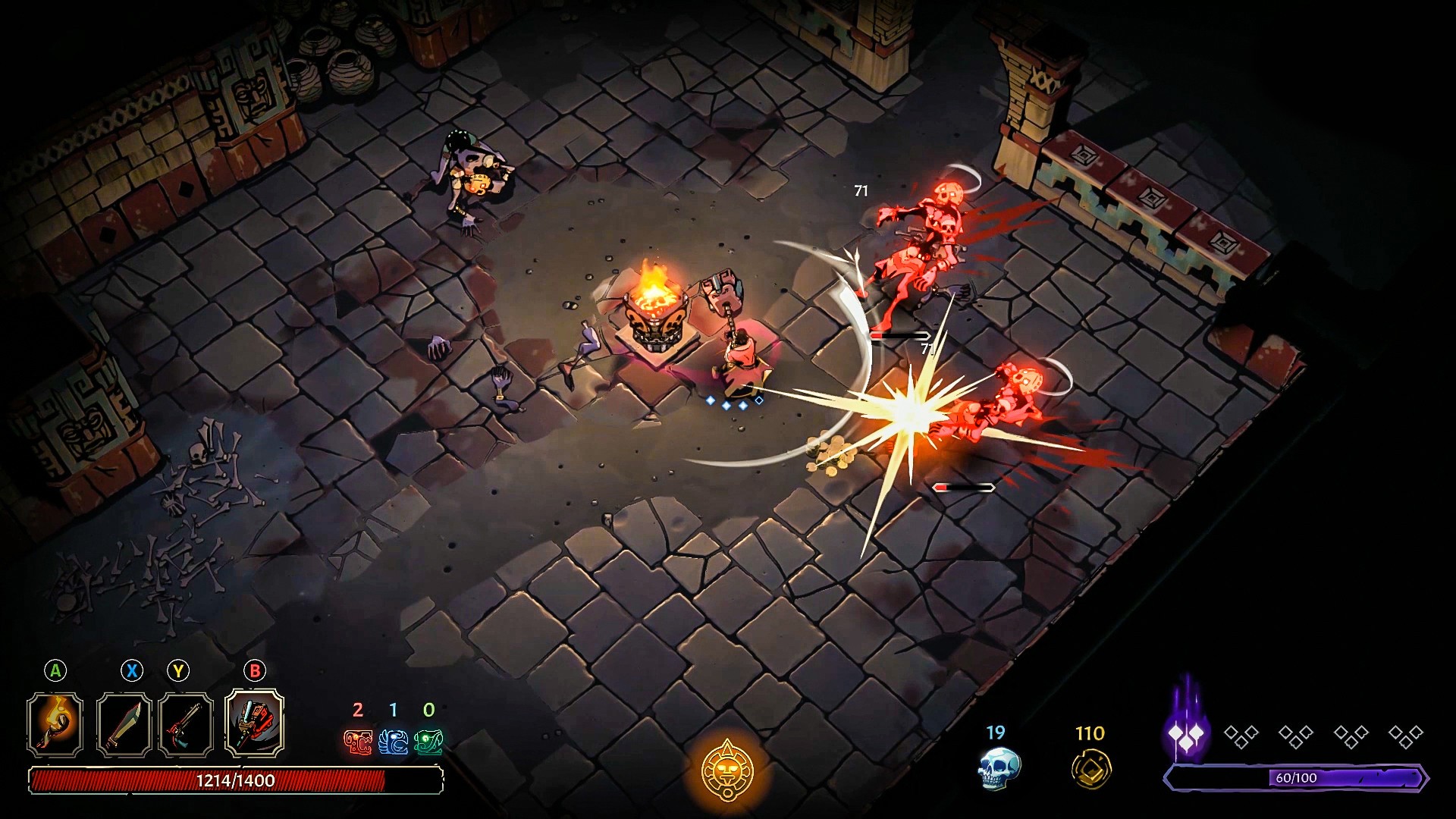 In any case, Curse of the Dead Gods also features a permanent progression system in the form of blessings and divine favours. Before you start your next run, you can use these blue skulls, which you’ll find as you play the game, to purchase blessings and divine favours. Blessings are pretty self-explanatory, they are essentially passive bonuses that you can take with you on each run, but you can only take up to three of them. Meanwhile, divine favours are cumulative and allow you to reroll the weapons and relics displayed on shrines. The game also shows another category of these persistent upgrades, but this only shows as WIP, so at least we know there will be more of these.

The game also has these things called “Expeditions”, which is just the game’s way of referring to longer runs with modifiers, with things getting progressively harder. As you complete these Expeditions, you’ll unlock more of them, but some of them can actually be quite challenging. For instance, one of the first ones makes it so that you’re hallucinating throughout the entire run, which simply makes you unable to see your health and corruption and almost completely devoids your screen of any colour. This is certainly a great way to offer much-needed variety to a game like this, so I’m hoping that we see a lot more of these added to the game.

Still, at the end of the day, while I’ve had a lot of fun with Curse of the Dead Gods, the combat can feel quite bare-bones at times. Still, overall, the game has a solid set of foundations and base systems that can allow it to excel and become one of the best in this genre, but it needs more content and variety right now. With that said, the corruption system creates this interesting game of risk versus rewards for the player, and the modified runs help to alleviate the repetitiveness that can start to settle in after a few hours. Personally, I’m a huge fan of the setting, and the eerie and unsettling soundtrack has got me on the edge of my seat a few times, so I’m really hoping that this shapes up to be an exceptional game in the future because it seems to have everything it takes to succeed and I’d honestly love for there to be more people talking about this.

Curse of the Dead Gods Review