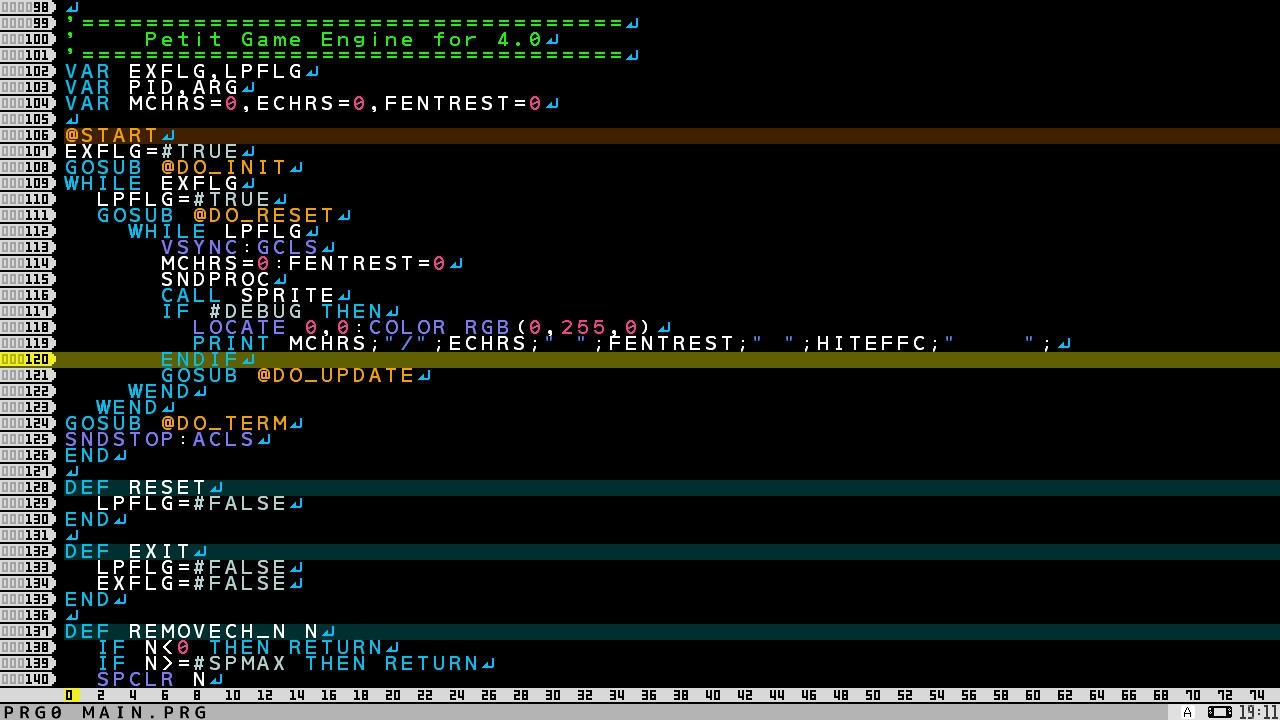 When it comes to game creation, players around the world find different outlets and avenues in order to take their vision and share it with others. More often than not, people turn to the PC to accomplish this: development languages are plentiful, resources are cheap if not free, and hosting has several wonderful routes, from direct downloads to itch.io and the fabled Steam Storefront. To be honest, though, sometimes you want to narrow your field in order to get noticed. For some, developing – the very act of creating – is a wonderful game and challenge unto itself. People who go out of their way to install Linux on every conceivable surface or port Doom to their smart refrigerator don’t do it to turn a profit: they do it to see if they can, and to prove that they can. For SmileBoom, a fantastic little studio out of Hokkaido, Japan, the challenge was to create an insular environment that was both familiar and a bit out there for would-be developers. The original creation, SmileBASIC, was a sleeper hit on the 3DS, bringing together a small but fanatically dedicated fanbase. Now, the story continues as SmileBASIC4 lands on the Nintendo Switch in the West, and the results are absolutely mind-blowing.

For those who are unaware, SmileBASIC is a game complier and program creator/editor that’s inspired a bit by the classic BASIC language, though with some obvious alterations and additions to both give it a more contemporary power layout and to help factor it better to a console-only approach. People who have experience working with multi-line coding will have a leg up in becoming acclimated to SmileBASIC4, though people who are completely new to the experience don’t need to be overly shy. Through a series of very helpful and well displayed tutorials, players will be able to learn, bit by bit, how to properly create their very first programs within SmileBASIC4. Sure, there’s going to be opportunities to print text, display colors and simulate chiptune music, but the additional commands means easy mapping to the buttons of the Nintendo Switch (and, in truth, to Nintendo hardware in general: more on that in a moment). There are commands to activate the rumble on the Joycons, which is a surprisingly in-depth addition that players will really appreciate. Additionally, the tutorial, which is cleanly localized, makes it easy for players to understand how to use the much larger line display to overlap code lines for sprites, music and maps to all live in harmony. One only needs to take a look at some of the spawned programs available on the 3DS to see the full extent to what could be created, and there’s good news: quite a few of the old programs made can and will, with a bit of tweaking, work on SmileBASIC4. Keep in mind, the level of tweaking can be case by case. 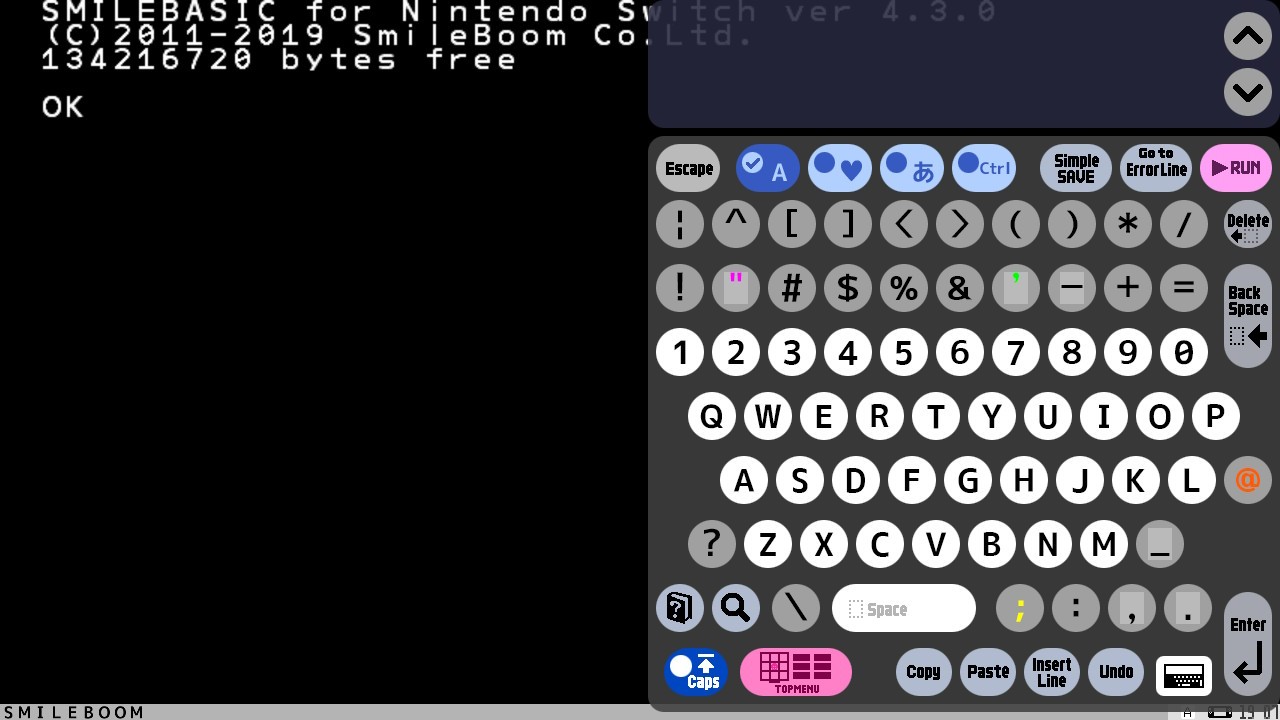 Visually, SmileBASIC4 has partitioned things out very well and makes the overall menu and different screens easy to navigate. The buttons for moving through the simple command line to the larger list of lines toggles with ease, and you can even make a mouse cursor appear and disappear if you’d prefer to navigate in a more GUI sense.  With such a small footprint, there’s zero lag to hop from the program you’re currently working on to referencing some of the other information you might have to give you a hint as to what to do next. The tiny talking heads that are the tutorial characters are cute, dropping in tiny jokes once in a while but mostly focusing on educating without overwhelming. The localization was a huge success: there isn’t any floating punctuation or grammatically bizarre sentences that muddle the learning progress, which is really good: I already felt a bit fish-out-of-water when it came to using a keyboard with my Switch. If there were also typos and nonsequiteurs everywhere, it probably would have done my head in completely. No, SmileBoom made sure that their Western release was polished and ready for both the hungry fans waiting for the game to arrive and the curious newcomers who want to see what all the fuss is about.
Judging a “game” like SmileBASIC4 is a difficult task to approach, because there are a lot of factors at play here. For example, SmileBASIC4 is, in essence, incredibly powerful if you take the time and effort to make something. I’ve seen wonderful examples of fan made programs that range from simple tech demos to full-fledged danmaku games and even a pretty competent Rogue clone. This sort of application makes a lot of sense if you know anything about Japanese indie game culture. Developers will often want to create something and share it with only a small number of friends or fans, and, until recently, didn’t see a lot of purpose in charging money for their creations. Indie devs like ZUNE and Pixel almost needed to be dragged into profiting from their creations, and now they are finally seeing a chunk of their success come back to them. SmileBASIC4 offers patient developers a chance to create some fantastic looking titles and share them with other SmileBASIC4 owners for the price of free, with a couple of small stipulations. To help keep up costs of the servers that host these programs, SmileBoom limits you to one download per eight hours OR you can buy a separate server ticket (which costs extra) to get additional downloads. It’s actually a great system, but it requires you to do a bit of research before using your allotted download. I ending up wasting eight hours by grabbing what was just a flashing explosion of Mario sprites instead of an actual game, so make sure to double check before either grabbing from the public project server or entering a public key you might find on some website. 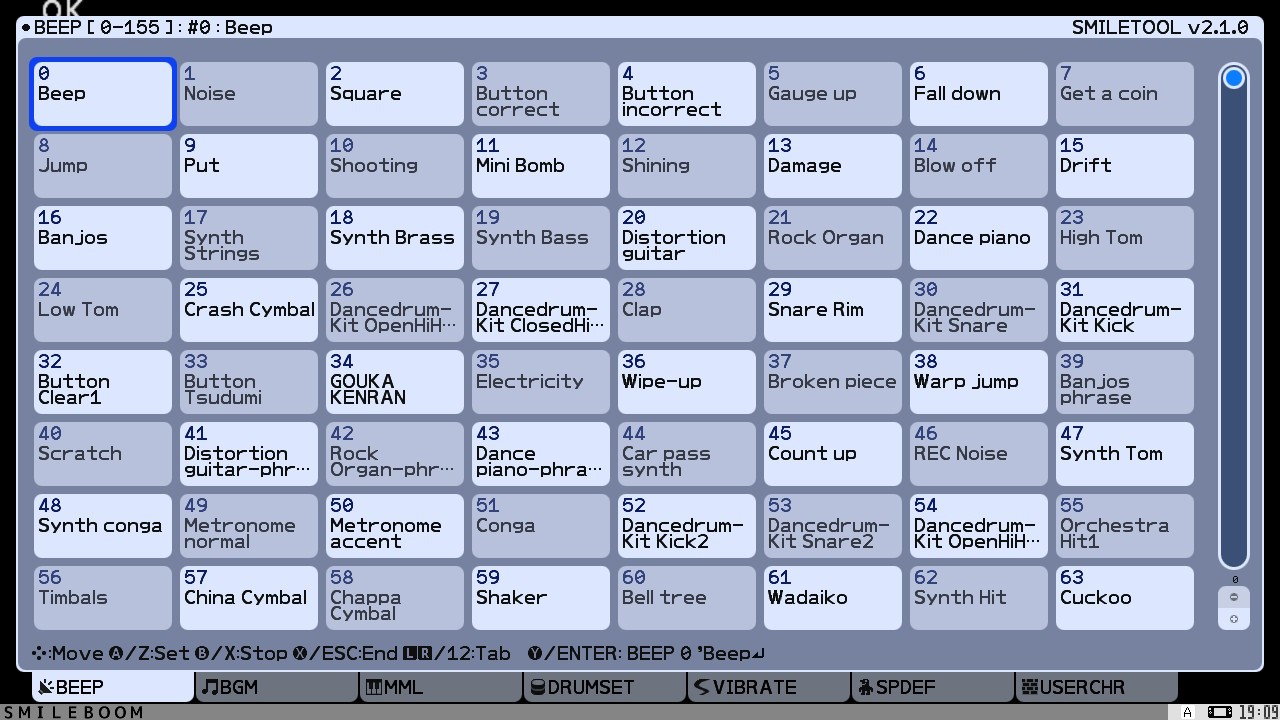 In that same vein, however, SmileBASIC4 can be really intimidating for newcomers. Fuze4, the other programming application for the Switch, has quite a bit of power under the hood but still can come across as very inviting and unassuming. The use of clever icons combined with the natural keyboard of the Switch makes for a cleaner correlation between action and reaction. SmileBASIC4 has a lot to learn through the tutorials, which does a bang up job of having you try the code before moving on to another area. However, in an effort to balance screen space and action space, SmileBoom has an original keyboard that can, at times, feel very cramped, especially with all the typing that needs to happen. The additional space on the keyboard to have autocompleted commands is helpful, but I sometimes was a bit overwhelmed by the sheer amount of real estate eaten up. Thank goodness they allow and even encourage using a USB keyboard to better input code (for Lite users like myself, get a good USBC to USB dongle). Once you look at all the features, though, you see that the extra power really goes into good use for what can and should be. The fact that they recognize you might be inputting with either a roman or kana keyboard is enough to showcase they are supportive of their fans on both sides of the world, and players can go off to the races without too much hesitation.
SmileBASIC4 is like a beautiful example of assisting and encouraging the human mind and the creative soul to try something different and challenging. You can sit at home and play games as long as you want, but have you ever sincerely wanted to see what you could make? Have you wanted to learn how to design a game, not to change career paths, but just because it seemed like something really fun to do? The fact is, when you look at the public programs for SmileBASIC4, the most downloaded title isn’t a dating simulation or a Gameboy emulator (which, by the way, you can code a freaking emulator in this program!). The most downloaded title is a helpful guide someone made, a cheat sheet if you will, on how to do different things within the program when designing your own software. That’s what SmileBASIC4 is about. It’s testing the bounds of human creativity within a very special playground, and having other creators around the world offer encouragement and appreciation for what could be. It’s a celebration of coders, crafters, dreamers and makers, and it’s something that I load up every eight hours, at minimum, to see what else others have made. After all, I’m a bit terrible at coding, but SmileBASIC4 made me think I could, with time and patience, make something really special.

SmileBASIC made me feel like I could create anything, or at least cheer on those who create everything.