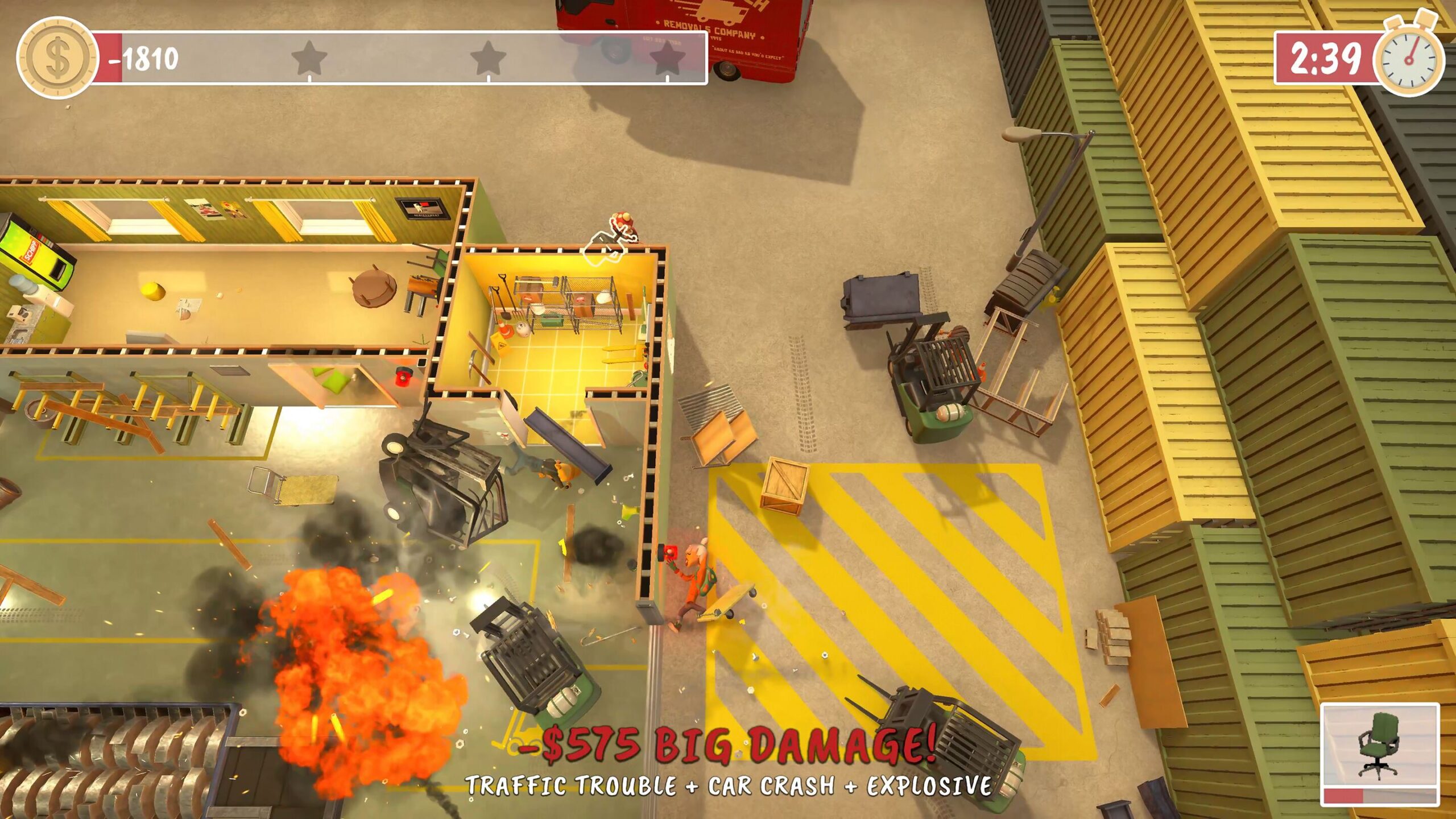 Get Packed is a Google Stadia exclusive and was shown off quite some time ago when the platform was very first announced. So, understandably, I was eager to get my hands on this, as are probably a lot of other Stadia fans out there. It times well with the public release of Stadia, as its only been available for the last six months to early investors.

Get Packed has an interesting background as Moonshine Studios who developed the title, started out half an hour drive from where I live. You may be wondering why this is so special and this is because I live in the deep depths of South West England in Cornwall where employment is hard to come by and opportunities are rare. So to see a studio blossom in Cornwall is excellent. The inspiration for the game came from one of the team Callum Taylor, who specialises in creating 3D environments and characters with a wealth of 10 years of experience in 2D and 3D modelling and digital art. Callum saw the comedy potential when helping his friend moving house, “trying to cram all these belongings into a tiny car like a bad game of Tetris”.

Before we get into the gameplay and mechanics of the game you have to bear in mind that the team is only five members strong. We have Callum Taylor who has been mentioned, Jamie King who specialises in Game Design. Dr Marcus Gardner who originally specialises in mechatronics and robotics but switched careers to utilise his expertise in the gaming world. Graham Smith who is the lead developer and has experience in the mobile gaming market with the titles he has worked on amassing over 2.5 million downloads and specialises in UI design. Finally Jennifer Bristow is a character animator who had worked with a range of mediums and styles spanning games and short film, she also has experience as a 2D artist in concept, character design and storyboard. I feel they all deserve a very special mention as this creation is incredible with not only five members of a team but a new fresh team at that.

Get Packed can be best described as a couch co-op removals game full of calamity and physics based carnage. It has many comparisons with Overcooked style gameplay and Gang Beasts mechanics if you can relate to those experiences. The game takes part in a small town called Ditchlington and the mayor of the town has sold all assets and property, and evicted its residents. In the aftermath everything has been flogged off to a big company named as Industrial Salt Co and they take the helm and control the entire town. 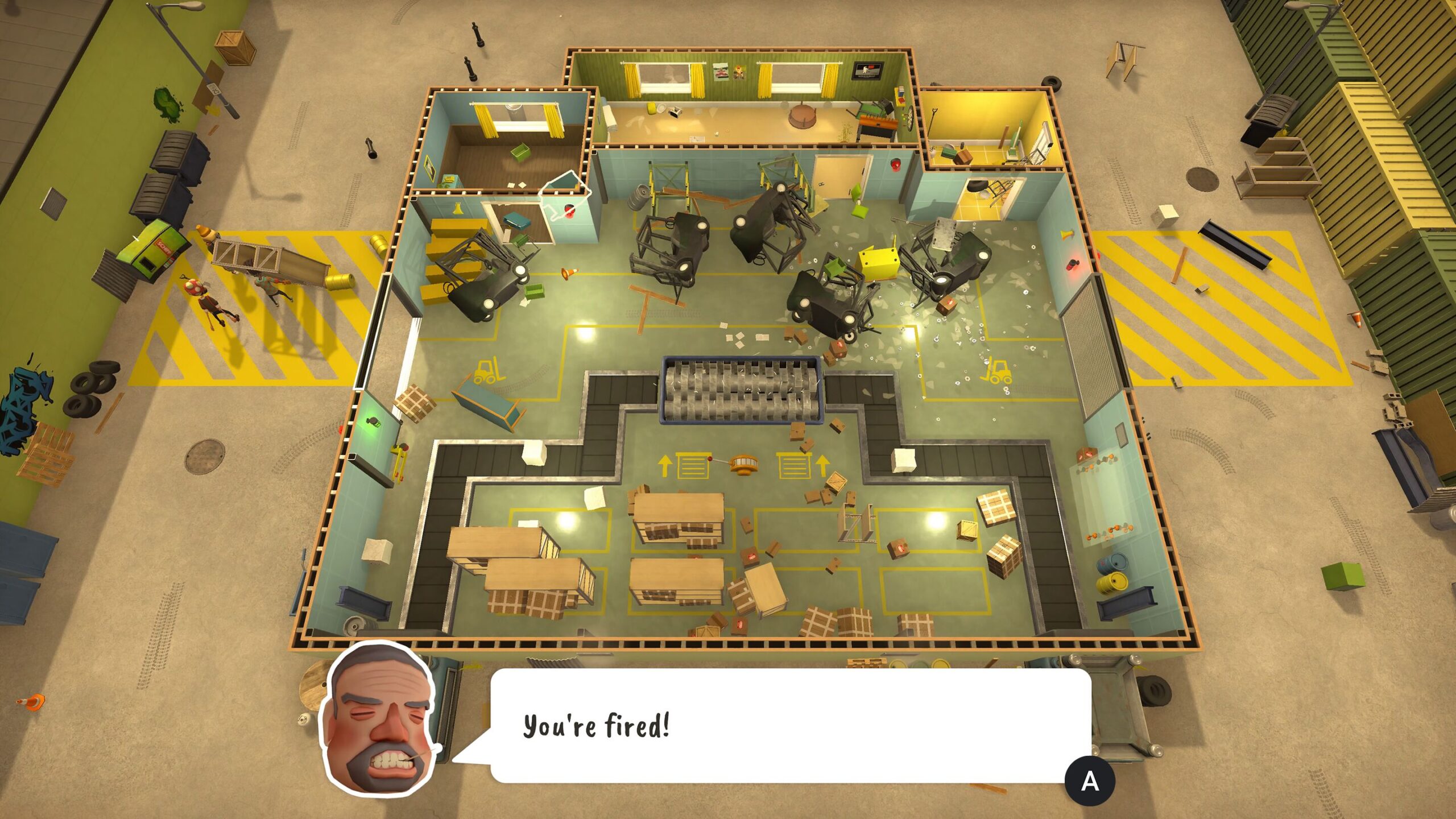 The campaign will set you off with a tutorial which was a big tick for me. It’s always good to have a sense of what’s going on even if the game is fairly simple to pick up and play. You do have the ability to skip this tutorial if you want to dive straight in but it’s useful to work through as even though it’s simple controls there are some things that are handy to learn here. One feature is packing things away so that you can make the most of the space in the van instead of sending it out and back constantly. You want to utilise every inch of space in the van as time management is key in this game.

The premise is simple here, you need to work alone or with your co-op friends as quickly and efficiently as possible in order to get the goods from the home, offices or factory/warehouse setting back to the van waiting outside to transport it without breaking it. Breaking items is quite easy here and you’ll lose money the more things are destructed but obviously the more intact things are the more money you will accrue. There are also special items that you’ll have to attempt to pluck at request which will give you bonuses, you have to be speedy as time is against you. This is all where the gameplay amounts to an insane amount of fun as the mechanics are crazy, wacky and ridiculously silly. But this brings an enormous sense of hilarity to the point where I couldn’t stop laughing along with rest of my family who were playing alongside me in co-op. It has been a long time since I’ve had this much fun with a game in the sense of just laughing at how unpredictable and foolish you can be with running in and out of the properties.

It’s a crazy niche genre which we have been served Moving Out in the same week. Which whilst side by side look similar they are world apart in the way they operate. Whilst Moving Out requires you to lift both heavy and light objects and negotiate them in and out of tight corridors and doors it doesn’t have the same ragdoll type moments Get Packed does. This is what sets the game apart and even though Moving Out is also a great game I can see there being more longevity in Get Packed.

But it’s not just about running in and out as quickly as possible in Get Packed. There are many obstacles to put you off the pace which add more laugh out loud moments. These can include a plethora of different crazy instances such as wrecking balls, racing forklifts, slides and many more environmental hazards. Carrying a stove amongst all this with spaghetti like arms is just too much fun that is guaranteed to put a smile on your face. 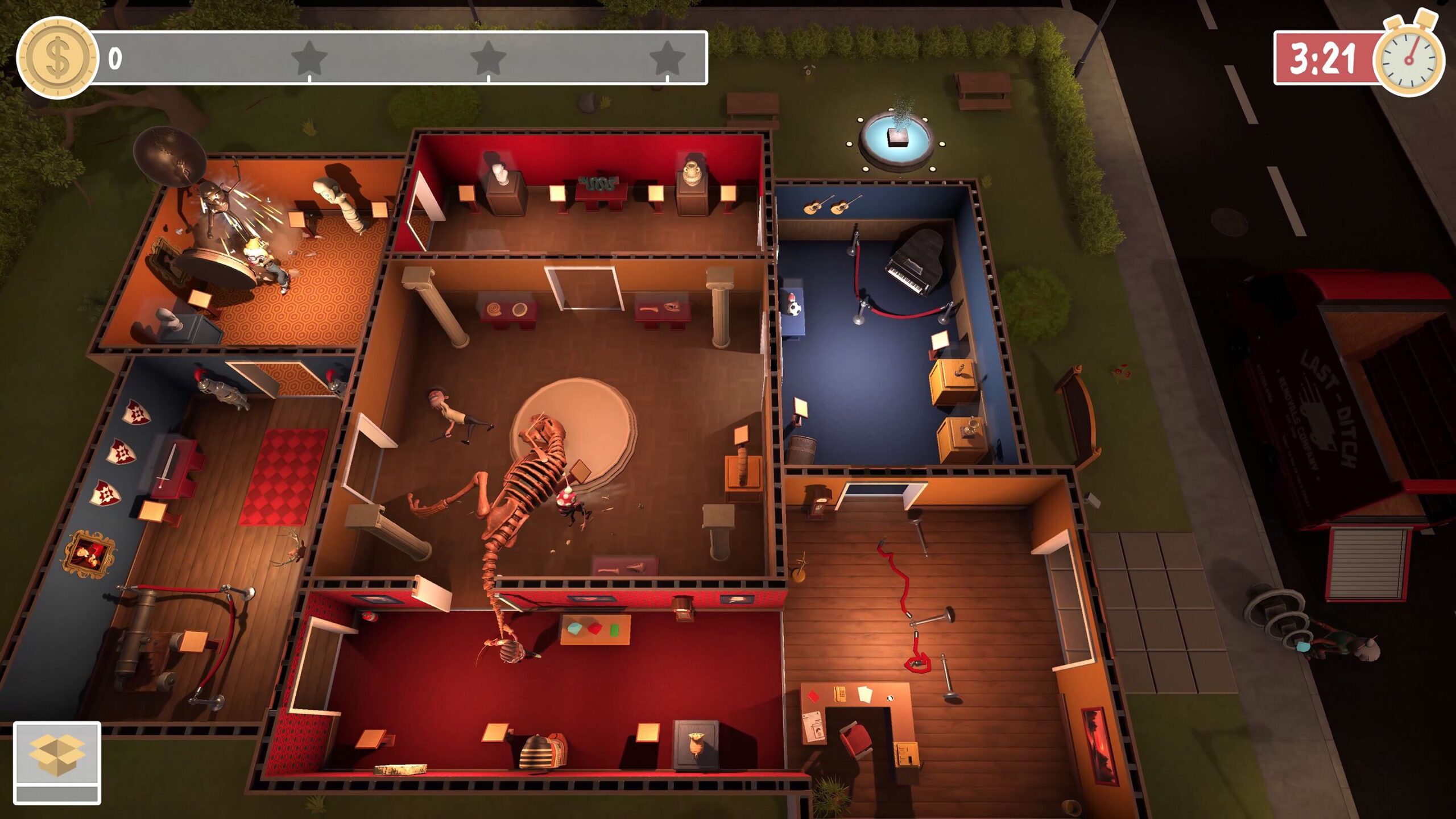 Once you complete levels though you don’t just then leave them behind and forget about them. There are challenges to go back for and I found myself going all the way back to the beginning again to replay and try and obtain these. A lot of these challenges, again, are insanely wacky and I won’t spoil the element of surprise of these for you. You will need to hit a certain scoreline in order to progress to the next level. What I liked about Get Packed in comparison to games like Overcooked and Moving Out though is that the difficulty didn’t appear to ramp up to the point it became frustrating. I recall playing Overcooked where it turned from fun into a full on domestic because it was exceedingly difficult. Get Packed excels here, whilst it’s still a real challenge I felt like I could finish the levels alone or with friends.

Whilst I don’t feel it is entirely relevant to compare games I do sense that some gamers will be playing this and prejudging before picking the controller and directly comparing it. So I do feel it’s important to point out these factors. It’s hard to criticise what I would say is the best Stadia exclusive on the market at presence but I did feel that the campaign was a little on the short side. After some research though there is a possibility of more levels and DLC being added further down the line. Would I pay for more levels? Absolutely I would because at £19.99 it’s a great price for the amount of entertainment you’re getting and when you enjoy a game as much as I did this, you don’t mind shelling a little extra out to expand the experience. The only other bugbear which was absolutely minor in the grand scheme of everything going on was actually packing things could be very fiddly and often cost time. Packing items with arms flapping about everywhere isn’t the easiest but I wouldn’t take this away from the rest of the game. So sometimes sadly you can’t win with every element of a game but it doesn’t hamper the enjoyment that much.

Another gigantic high five to Moonshine Studios here in the fact that there is online multiplayer! This immediately filled me with joy. Although I like a cracking campaign and local co-op you haven’t always got your friends and family with you. I’m a hardcore online multiplayer fan so this was a welcome addition and it really did work well on Google Stadia. You can invite your Stadia friends if you wish and up to four on the same session. Playing online I experienced no lag or noticeable downsides and ran spotlessly smoothly. I’m going to do the comparison thing again and say that Moving Out did not feature any online feature which I found quite lazy considering Team 17 are much more established in the market. You have to look at longevity when shelling out hard earned cash these days and Get Packed ticks every single box. Can you play alone, yes. Can you play with your friends on the same screen, yes. Can you play online, yes. These are the fundamentals I always look for in something that always features several players working as a team. I will also add there is a versus mode if you want to play against someone rather than work with them. There is also destruction which allows you to do the opposite of trying not to break everything and you will be expected to destroy as much as possible.

Overall, Get Packed was definitely one of the best games I’ve played in 2020 so far and certainly my favourite game in the Google Stadia library. My understanding is that it is a “timed exclusive” so it will come to other platforms in the future and I will more than likely pick it up on Xbox One where I do the majority of my gaming. If you’re the type of gamer who is always looking for something to play local co-op as part of a family or get together then this is a must buy as this is where the game truly makes its mark. As a sole experience it is still incredibly fun and the addition of online multiplayer allows you to experience the co-op side without having to make real life friends. If I had to pack games into a box and leave some behind, this would absolutely be Get-ting Packed in the box.

Get Packed is probably the greatest Google Stadia exclusive on the market so far, it will have you smiling and laughing throughout.