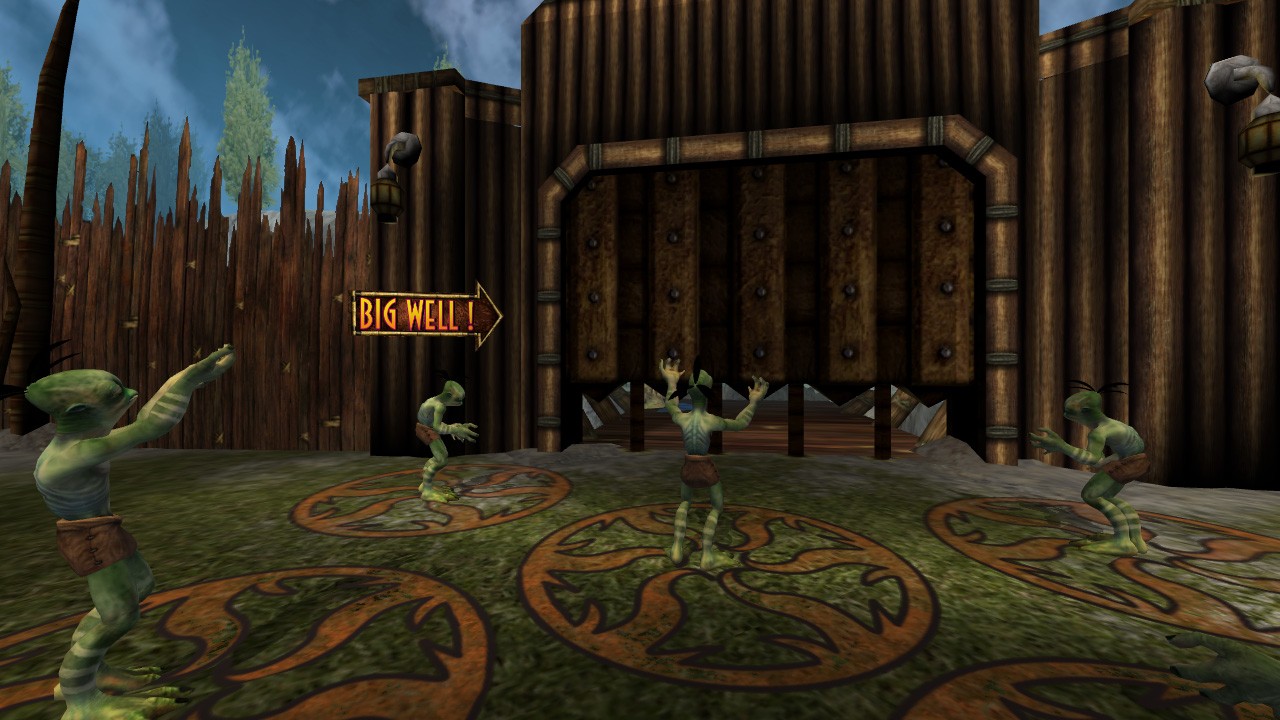 If you’ve been gaming for some time now, you will no doubt have stumbled upon the world of Oddworld. Whether that be the original version launched back in the days of the PlayStation One, or are more familiar with the teasers released for upcoming Oddworld Soulstorm; Abe and ‘friends’ are here for the long run. The latest title out on the Switch is the re-release of Oddworld: Munch’s Oddysee – familiar territory for many, but now suped-up for portable play.

An exclusive on the Xbox in 2001, Oddworld: Munch’s Oddysee has done the rounds on various platforms from the PS3 to the Vita. There is clearly a fanbase for the franchise and with this title. Having briefly played it in the past, my experience on the Switch is as new to me as those unfamiliar with Oddworld, so here’s the lowdown. You start as the titular Munch after being captured by the evil Vykkers, imprisoned and experimented on. One such experiment has a sonar device implanted in Munch, which he subsequently uses to escape the testing facility. As a Gabbit, his species is on the edge of extinction. The objective is to save those who remain, as well as the friends he made along the way.

Oddworld: Munch’s Oddysee is a glorious throwback to the late 90s and early 00s with the design of the menus, cutscenes and general gameplay. That’s all a good thing. The chances are that this game was aimed at existing fans, potentially winning new ones along the way. Other than the quick rundown above, there’s no alienation for new gamers as there’s a chance to play a movie (displayed in 4:3) to fill you in on what’s happened in previous titles. For veterans, the game speak menu returns as a little bonus where you can have either Abe (yes, he’s back) or Munch speak where Abe lets out a cheeky air biscuit like the games before. Over two decades later, and it still makes me chuckle. 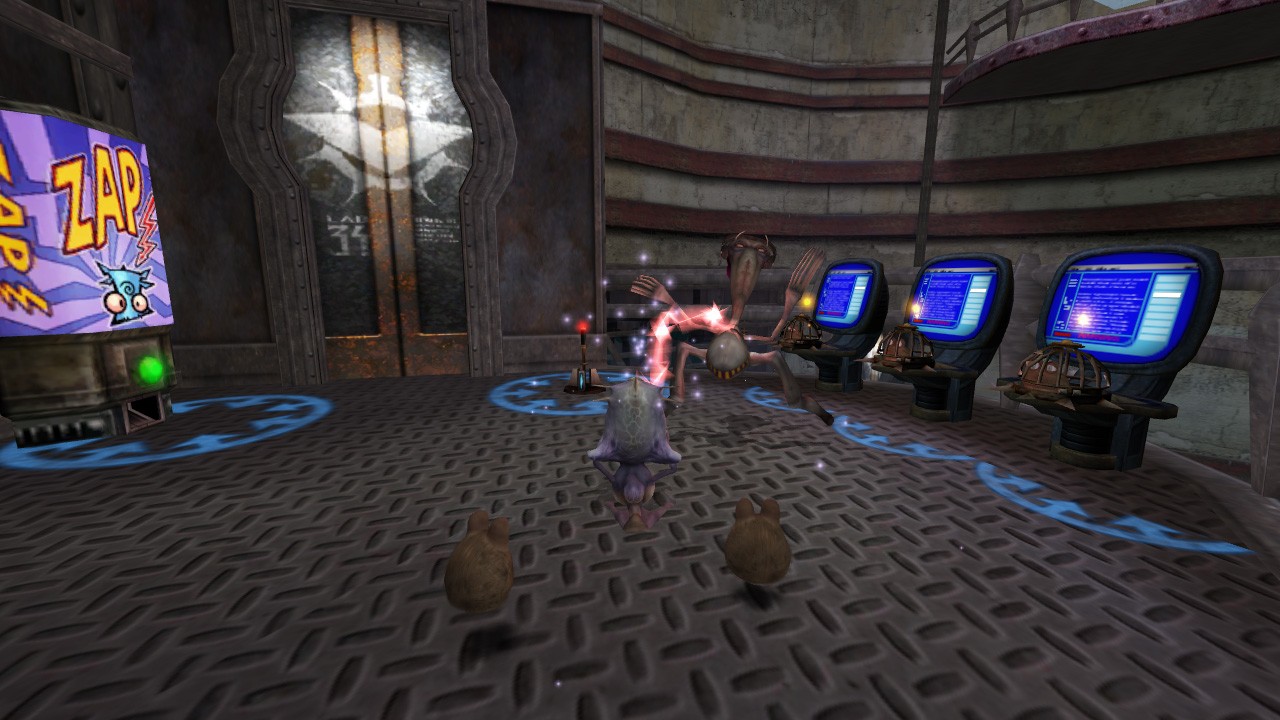 It was quite rewarding to see so many cutscenes, taking me back to a time when they were ever prevalent in a title, though in later years realised that not everybody shared this same affection. It’s quite rare to see these FMV sequences any more, other than in-game cutscenes in mostly triple-A titles as the pixel art games don’t have the capacity for it. Another one for nostalgia fans, sure, but it builds into the Oddworld lore a little more and is a bit of a hook. After all the bells and whistles, it’s time to play the game, and that’s when nostalgia kicks in again, but for a different reason: camera angles.

Oddworld: Munch’s Oddysee does feel a little dated with the main gameplay. Sure, it’s wrapped well, but when you open it and start moving around, the camera angles begin to be a problem – not game-breaking, but on the border of irritating. The standard camera following effect is pretty good, but the times when you drop off a platform and try to reposition the angle feels in vain. The right stick moves the camera about, but it’s like driving a 1990s Volvo and does not want to co-operate with you. Instead, you have to hamfist your way about the area until you’re in an open space and retry all over again. Emphasis on it not breaking the game, but it would have been nice to have a bit more control – mainly due to the platforming elements.

I seem to remember playing as Munch from the get-go, but you have to rescue him first. Taking control of Abe, you have the same influence as before, getting the Mudokons to follow you by pressing the X button, then A to command them to act such as meditating to open a door. Doors can also be accessed by collecting spooce – the equivalent of coins. Don’t have enough? Find a spooce spore and hold down ZL and Abe will conjure up more, one at a time. To collect the spooce, merely walking into them will suffice. Still, referring back to the camera angles, walking in an appropriate line – especially when there’s a drop either becomes a nuisance. 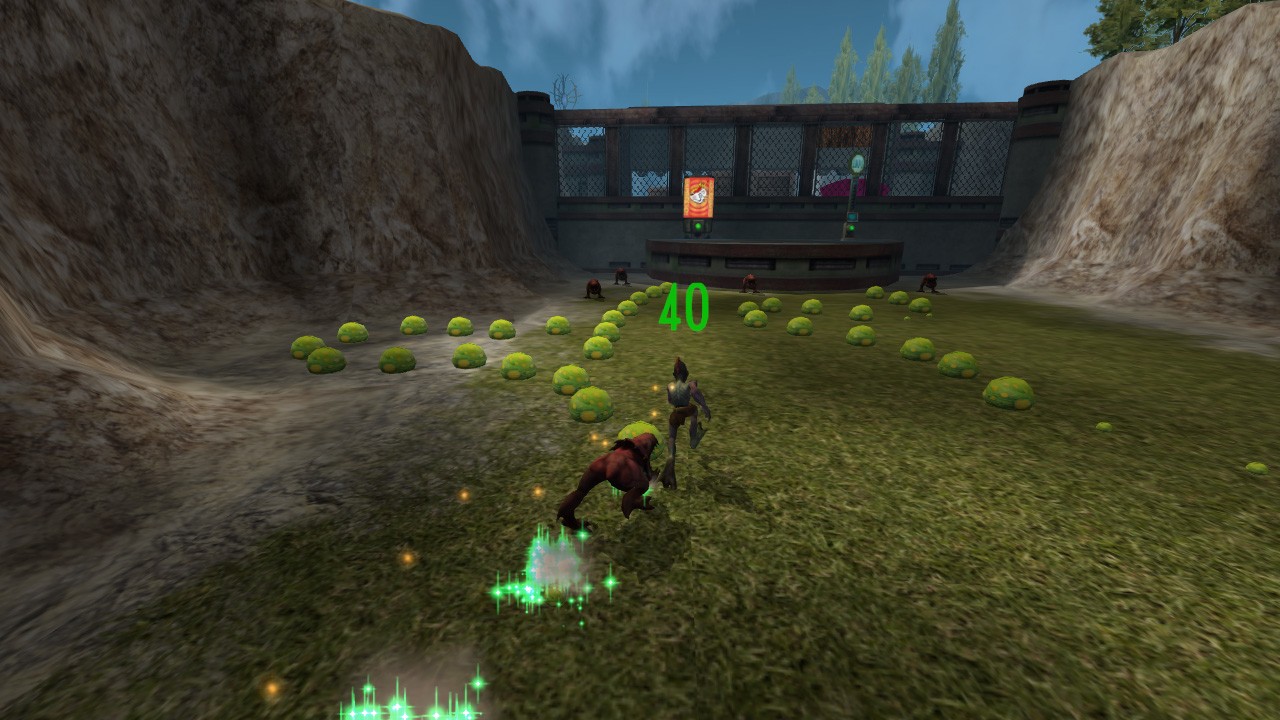 As for gameplay, it’s very much the same as other titles played out in a third-person perspective. Both Abe and Munch recruit minions to act out their bidding and to have perhaps a little buffer for when there’s danger. The communication between the NPCs is simple and remains quite fun in the way they interact. Still, when you have several characters following you and give them the same command, the same voice repeats all in one go with an annoying echoing effect. While I’m sure the original was the same, it would have been nice to change the pitches or similar just so that it wasn’t so messy. That’s a personal thing though, and I’m fussy.

The Oddworld series has always been quirky, and it remains so here too, but there aren’t any new additions to cater to the modern market. The presentation of Oddworld: Munch’s Oddysee is very good, but adding a bit of polish doesn’t disguise the foundations and moving around some of the maps resemble the N64 era. That’s not a bad thing – this is a 20-year-old game, but it’s more for those who perhaps want to relive their youth or have a penchant for retro gaming. From my perspective, the game mechanics resembled the days of playing a PlayStation One, only with sharping graphics – the controls remain a pain. The camera angle was already addressed, but having the jump button the same as the action button for switches had me jumping off the off ravine or into other dangers a little too much than I would have liked to.

Puzzles in the game remain straightforward enough, but the platforming sections offer the most challenge – possibly through the camera angles and how your characters move. In terms of atmosphere, you do still feel like you’re on another planet – both in design and the air given and in that respects, Oddworld: Munch’s Oddysee is an enjoyable experience, but the controls, unfortunately, let it down. The playing areas are unusually large, but they do become a little repetitive at times, so this is probably best suited to those familiar with the game or have the patience for old school gaming.

One for nostalgia fans mostly, Oddworld: Munch’s Oddysee makes its way to the Switch after multiple appearances on other platforms in the last two decades. The game design and controls haven’t aged particularly well despite the buffing of graphics etc., but it still has that quirky Oddworld vibe and worth your time if you liked its predecessors and patient with the controls.