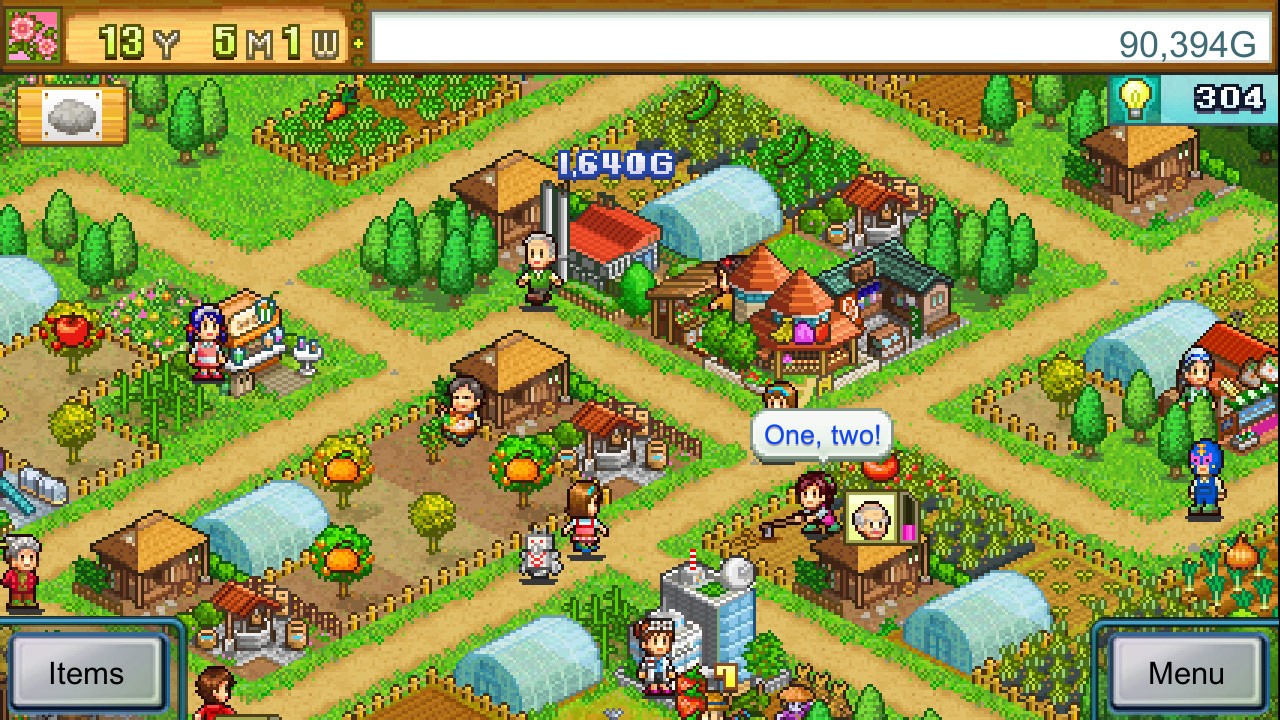 It’s incredibly easy to simply dismiss new games from Kairosoft because there is so much about the aesthetic that simply never changes. It’s certainly part of the appeal, and a vast part of their continued success in both the mobile gaming and gaming market in general. You only have to look at the idyllic avatars with short, stubby features that are defined but still sort of cute and floaty and you know exactly what you’re in for. There will be a mission of sorts, but not necessarily an end point if you don’t want there to be. There’ll be time management, but it’s not the extreme sense that’ll have you pulling out your hair. In general, it can be played in spurts, either long or slow, and the constant save system will protect you from sinking hours into projects and then losing all your progress. But there should be some clarification: Kairosoft has been learning. Like the robot they embody, there’s something brewing under the surface, and the subtle changes between games can only be fully realized if you play a lot of them, or put a lot of distance between them. Which is why I can say Pocket Harvest was a huge surprise in complexity and enjoyment.

With Pocket Harvest, you’re an aspiring farmer, looking to plan crops and harvest grains and do all the things that farmers tend to do, though let’s be clear: the focus is on plants. 8-Bit Farmer, another Kairosoft title, focuses on the overall aspect of farming with livestock and such, and that isn’t really the purpose here. Instead, it’s almost like you’re cultivating a massive, multifaceted orchard that brings about all sorts of ideas and attractions with it. Growing up, the orchard near my home had different fruit trees in harvest all year round, but they also had a petting zoo, a hayride section and a place to paint pumpkins in the fall. When I was young, I thought that was too many things to have in a simple orchard, but I realize that I was being naive. In Pocket Harvest, the groves and orchards are just the beginning: wait till it’s time to add the golf course. 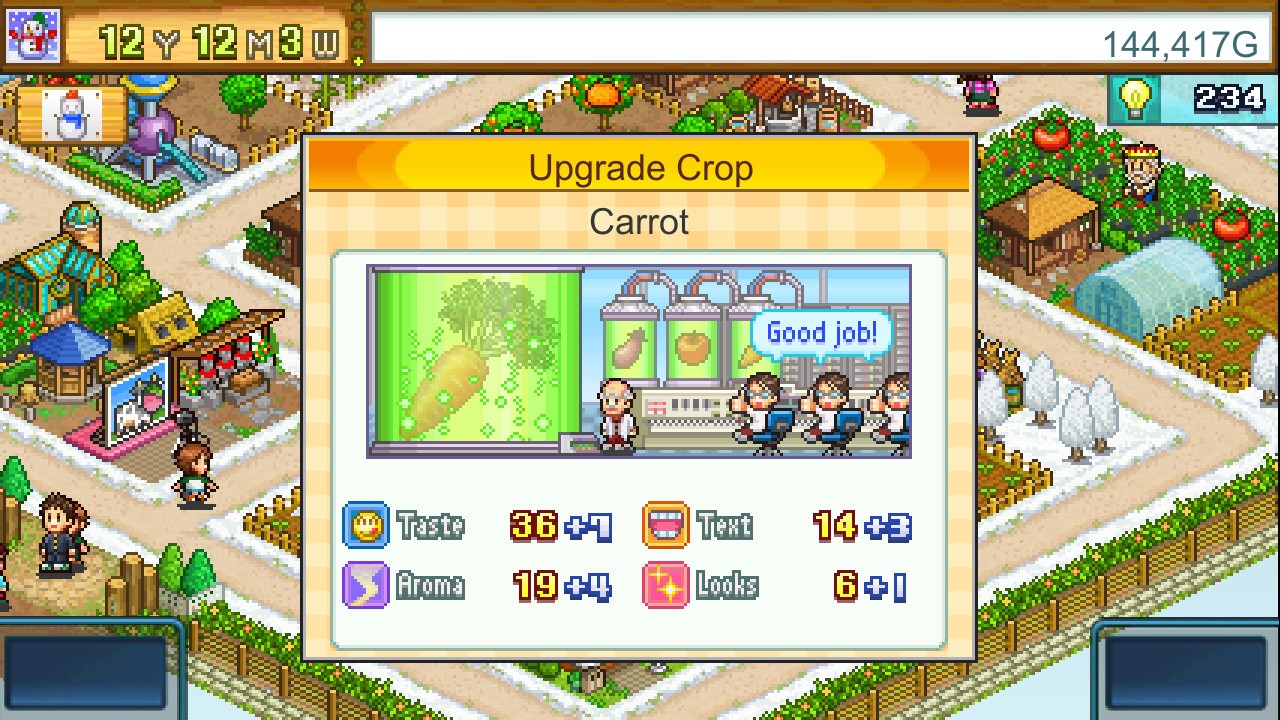 The game offers zero preamble with this one: you are a farmer, here’s how you farm, get to work. Like all great Kairosoft titles, there’s the option to use button or touchscreen controls and both have their places depending on your play style. As you often need to finely touch upon certain aspects of your gameboard (the workers, the crops, the different buildings), touchscreen can be almost comforting when playing in handheld mode. Having said that, I did give equal time to using the buttons as well, and I found the controls to be very responsive and tight. Toggling through the menus with L&R were a breeze, and the option to use either the control buttons or the joystick meant being able to navigate comfortably between larger and smaller scale operations. I actually found using the right joystick to zoom in and out on the map easier than the touch pinch that many people use because I don’t think the Switch Lite’s touchscreen is as responsive as the average smartphone. Which is fine, by the way: I didn’t buy a Switch just for touchscreen games.

What quickly becomes apparent, though, is that Pocket Harvest wants you to go beyond the simple ideology of things. First and foremost, the actual mapsize is massive. When you start off, you have only a small square of the potential farm, and even that could house plenty of different crops without redundancy. However, it’s only a few moments before the over-your-shoulder AI helper insists that we try and buy the farm next door so that we can expand. Suddenly your real estate is twice as big as it was a moment ago, and now you’re facing brand new crops and possibilities. The rollout never comes too fast, but Pocket Harvest certainly has a momentum to it that brings you from a singular task with a couple of hired helpers to a massive sprawl of land that is equal parts food production, entertainment, temporary housing and, no joke, robot control bases. You will be astonished at how much is going on within your formerly tiny farming community, and you essentially have your finger on the pulse of all of it.

Additionally, Pocket Harvest incorporates some excellent extra details that Kairosoft had picked up from their other games and ventures. Previously, Dungeon Village was one of my favorites because it did such a great job of mixing in RPG quest-style elements into the simulation world, and it made the game more exciting and involved. Pocket Harvest, surprisingly, takes these same cues by adding missions to the farming life. You’ll be tasked, even early on, to grow a certain number of things, or build a certain number of things, and receive rewards for it, something that was sorely lacking in some of their games (Hot Springs Story comes to mind). While you still powerup your farmhands by using items and training to increase certain farm-based stats (workforce power, ingenuity, etc.), these stats then get to be a part of something larger in terms of farm expansion. For example, you can take your brainiest worker and have them analyze crops, figuring out the best way to make them have a better yield or to come to fruition faster. I’ve never doubted Kairosoft’s dedication to being detailed and accurate about the games they make, but there just seems to be an extra layer of detail that’s been carefully spread over this game. 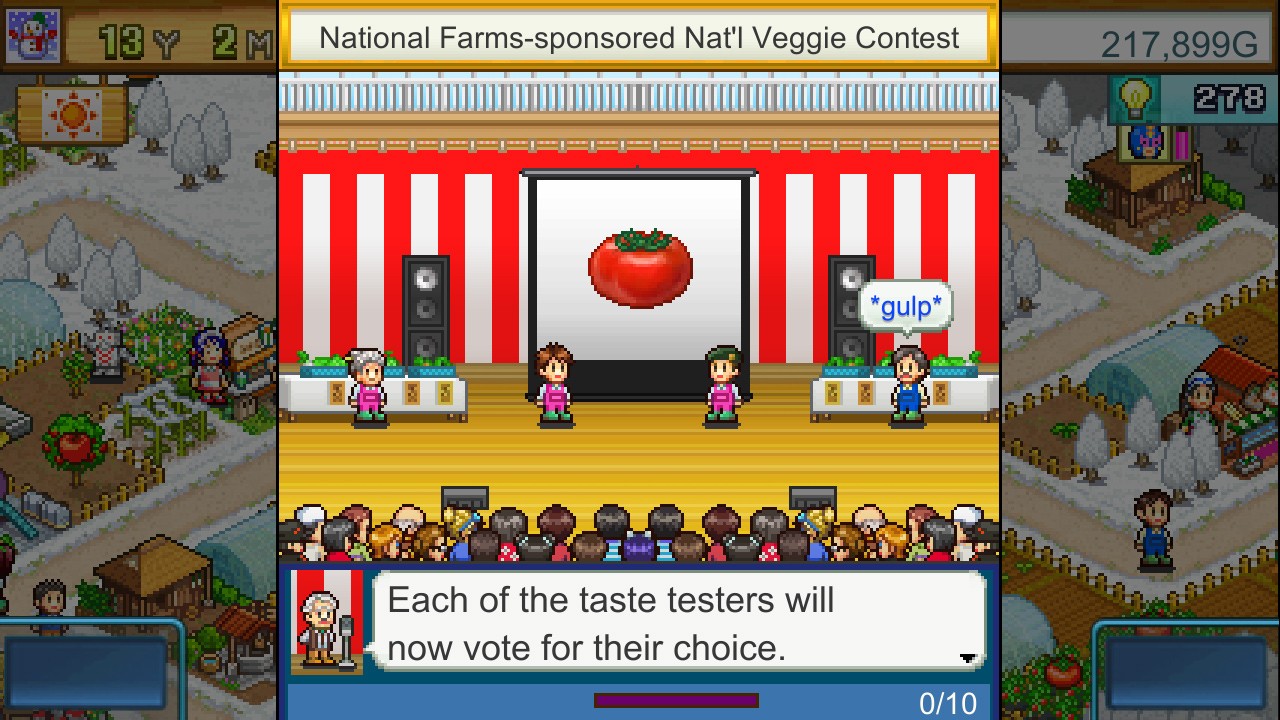 Naturally, with a game that incorporates a lot of natural aspects to it, Pocket Harvest can, occasionally, be quite unfair. You can and will hit a wall for a period of time where it seems like you have too many crops and not enough workers if you expand as quickly as you want, resulting in bad yields and wasted money/time. Disasters can strike, be they tornadoes or insect infestations, and it felt, at times, more frequent than other games (I suffered blackouts during Game Dev Story quite infrequently). Also, people who are familiar with Kairosoft Games will be caught offguard by the price of things. When you start this game, you’ll have a whopping 500,000 of on-hand cash, and you might start to think the game puts you on easy street from the beginning. However, you quickly find out the price of expanding land, paying farmhands and genera upkeep makes this 500,000 only a small parachute before you end up with razor thin margins. Players should absolutely be aware and frugal at the beginning if they wish to have longevity in this game and not be forced to have a second run.

Overall, Pocket Harvest is a perfectly enjoyable and serviceable Kairosoft experience. There are random occurrences of sales, disasters and weather patterns that make the game eventful, plenty of management without it becoming too much, and lots of cute, customizable points to keep the farm game different for everyone who takes to the fields. If you don’t already have a game to sink a lot of time into, Pocket Harvest might be a great, soothing grind for people who aren’t willing or interested to fully invest into something like Animal Crossing. Additionally, the price point and the amount of time you get from the game can’t really be beat, so feel free to buckle up your overalls and have at it: dragonfruits are in season, and the crops are worthwhile.

How do you like them apples, because they’ve been locally sourced and grown by robots?