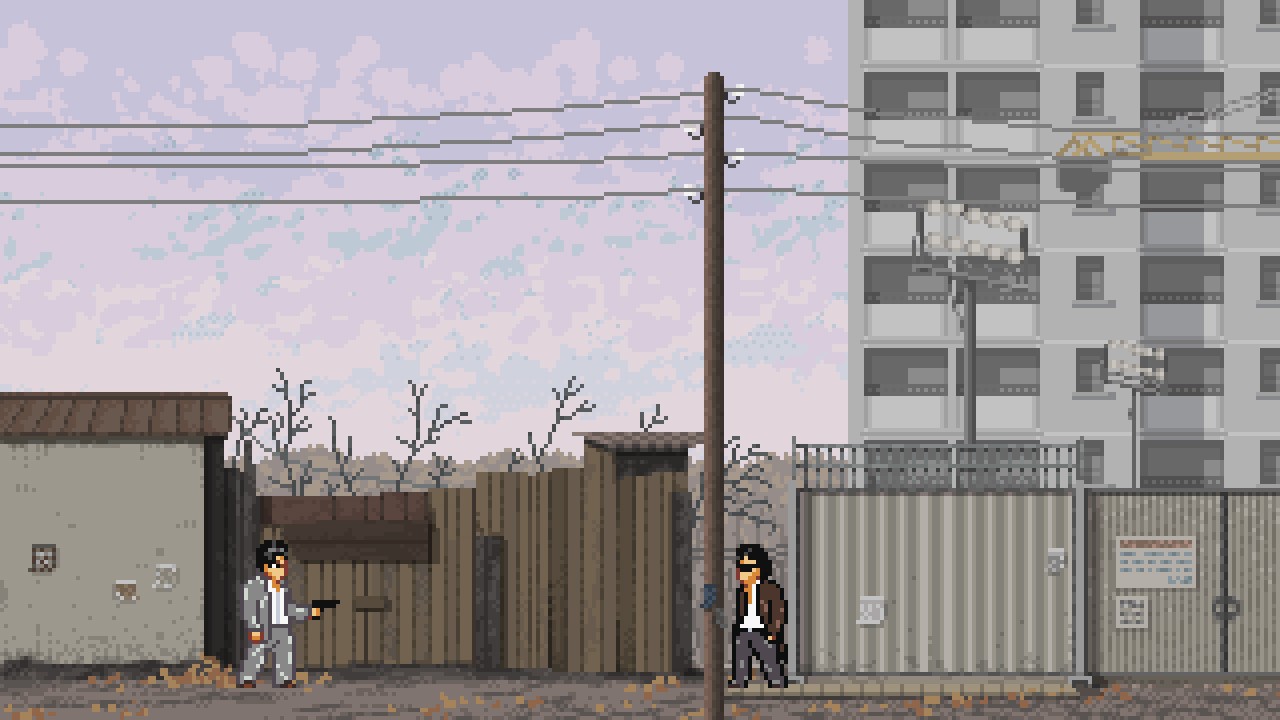 Video games these days come in all sorts of shapes and sizes. Some exhilarate with elaborate set-pieces, or vast journeys and exciting stories. Some though, take on a completely different approach, providing you with philosophical thoughts that touch on subjects that used to be avoided. Loss, death and mental well-being are just some of the topics that some, more mature, games have brought to the spotlight in recent years; some provoking deep stirrings within us, whilst others haven’t been quite so effective and soon become forgettable, thus failing at the message that they try to convey. What needs to be understood, is that these subjects can be difficult to convey through the form of digital media. The latest title to try and get their message across though, comes in the form of Arrest of a Stone Buddha as it ponders a release onto the Nintendo Switch.

Developed by Yeo and published through Circle Entertainment, Arrest of a Stone Buddha follows the exploits of a professional killer during a month in November, 1976. Set within the Parisian streets and shops of France’s capital city, you experience your life through two sets of eyes; firstly, the glorification of mass killings and secondly, the mundane existence of life itself. Whatever view you take, everything here revolves around a central theme of mental well-being, with a over-arching question that progresses towards one of two answers. It’s all presented in a 2D, pixel-art, side scrolling journey; one that takes you through levels of rampant gun play and another that places you within the quiet streets and homes of your very own thoughts. From the outset, it’s obvious that this is a game designed to provoke some sort of reaction. It can be shock, horror or even excitement, but the opening scene of this game is one that is used to great effect. Leaving the scene of your heinous crime, you are soon greeted with a flood of gunmen; all of them hell-bent on bringing an end to your life. These sections of the game run through several levels, or stages, that takes you through a number of environments, before reaching a vehicle to make your escape.

The next setting of the game provides an insight into the personal life of your contracted killer; visiting bars and cafes for your alcoholic and coffee fixes, as well as drug stores to stock up on sleeping pills. All of this happening between the drags of your constant cigarette habit and regular evenings of carnal knowledge with a lady friend. Oh, did I not mention that this is strictly a game for the more, mature player? Well, I have now. It’s all off-set within a very distinct backdrop of monotony that’s devoid of colour; a presentation that matches the themes and tones that this game tries to convey. Between killing and pondering, the game presents a series of cut-scenes, or narratives, that probe an insight into the mind of our killer. 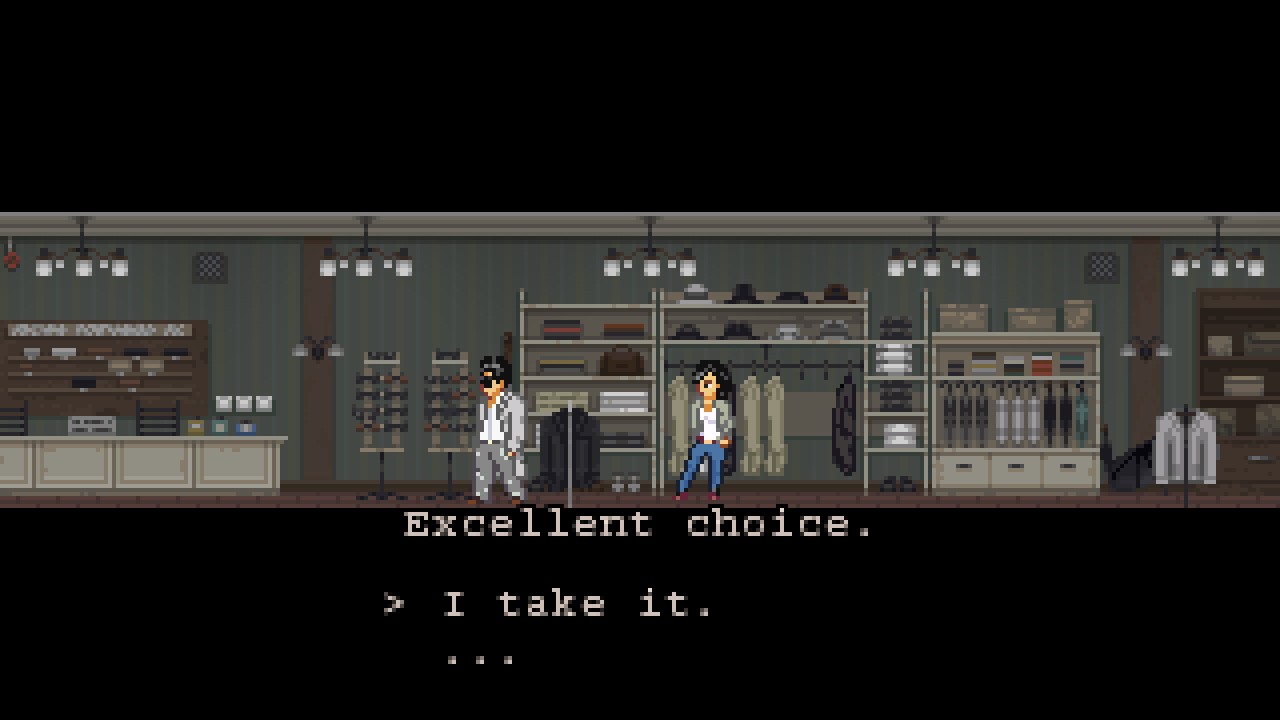 The game charts a series of days throughout the month of November, as depicted with the circling of days on a calendar. Each day brings a new job and several levels of merciless killing, whilst others blur into the long days of meaningless activities. However, whatever task is required of you, what the game does well, is equally off-set by what the game does badly too; often leading to a level of gameplay that frustrates or just, simply bores. During the levels of gratuitous violence, or killing, your character needs to walk to the left or right of the level, or simply dispose of all enemies before making a getaway. Being primarily a shooter, there’s no jumping or platforming mechanics here, it’s simply a case of walking and shooting. There’s no aiming, as to speak of. Instead your character shoots in a straight line, with one-shot kills; regardless of whether the enemy is above or below you.

Enemies flood the screen from either the left or right directions, and when I say flood, I mean flood. It’s an endless flow that soon develops into twenty or thirty corpses that lie on the ground. Without the ability to run, you simply walk in the direction of the exit, as you shoot from left to right. The animations of your gun handling are sweetly presented here, with some stylish animations of disposing the enemy count here. Armed primarily with a pistol, you constantly shoot the oncoming rush, before you get shot yourself. The sheer number of enemies on-screen makes this a brutal challenge; even on the easier difficult levels. However, if you follow the correct pattern, you can get through it, although a limitation to the amount of shots you can endure and some annoying mechanics can make each of these levels a frustrating affair.

For instance, there’s no on-screen depiction of how many bullets remain in your gun. Once the magazine is empty, you can stylishly disarm an opponent, or break their arm in the process, allowing you to continue shooting freely. However, you can often find yourself with an empty gun and whilst trying to acquire another one, end up being pulverised by gun-toting enemies from all sides at either end of the screen. This is due to  a random nature of enemy types that come into view; some stand a distance away and take shots, other come on-screen brandishing their weapon, whilst others simply run at you. To ensure your survival, it is important to dispose of gun-toting, or aiming threats first. However, as the runners enter your field of view, they also shield the enemies that aim at you; leaving you vulnerable to a number of shots before you can shoot them down. 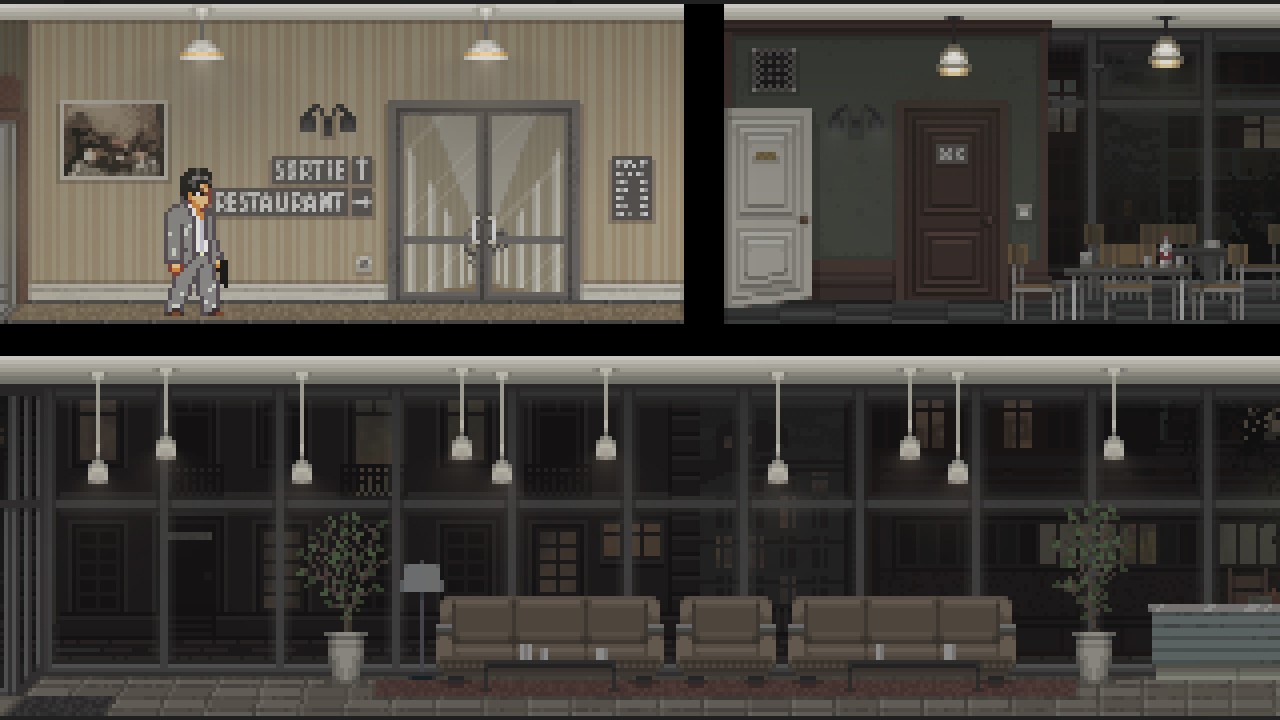 All too often, you’ll find yourself in a position where you can’t shoot the people shooting you because of bodies in the way. Another frustration also came in some enemies standing off-screen; often picking you off just as you reach the exit. With each death, you have to restart the level again, forcing you to trudge through its frustrations again; something that becomes too tiresome, too soon. Even its cool animations and disarms soon grow tiresome from its repetitive nature of grind, rinse and repeat. It’s by no means impossible, but too many frustrations, restarts or random mechanics makes it less enjoyable than what it should really be. Between these levels of wanton destruction, the pace slows dramatically, as you walk the streets and live a mundane existence. You can visit your home, take pills, go to the bar or cafe and even the theatre; all between the nights of being within the bedsheets of your lover. However, these mundane depictions are equally mundane to play. You simply do nothing in order to fill your day. You walk about, interact with a few NPCs and then walk about. That’s it. Even the narrative fails to evoke any thought, leading to a disinterest in the main protagonist and ultimately leading to the game failing in the message, or emotions, it is trying to convey. There are two endings to the game, but even then, they fail to answer questions or bring any meaning to the existence of the killer that you’re supposed to care about.

One area where the game is effective though, is in its presentation. It contains a very film-noir style of production, with some glorious depictions of seventies Paris and sombre soundtracks that perfectly match the theme of the game. However, these tracks also play on a loop and, again, soon become tiresome; especially when trudging your way around the streets of a very grey, not gay, Paris. It’s unfortunate really, as you can easily see that the game tries really hard to be something special, but ultimately, it just ends up frustrating, boring and a bit flat really. I tried really hard to like it, but in the end, it made me feel just as depressed as the character as I was trying to save.

Overall, Arrest of a Stone Buddha is a game that tries really hard to convey a serious message, but fails through a lack of polish in terms of overall gameplay.  There are moments of pure genius, with some cool mechanics within the art of killing, but the randomness of its levels and frustrations overshadow everything that the game does right. It looks fantastic and, initially, sounds great too, but everything soon becomes as stale as cigarette smoke. Whilst the shooting levels can entertain to a point, it’s all off-set with a depiction of living a mundane life. The problem here though, is that playing a game about a character who fills his time doing nothing, also becomes mundane to the player. With two endings to experience, there is a form or replayability here should you wish so, but ultimately, the narrative just falls flat and leaves you asking more questions than answers; making this a game that could have been great, but simply ends up average at best.

Arrest of a stone Buddha Review

Live the life of a contracted killer through merciless killings and a mundane existence in Arrest of a Stone Buddha.