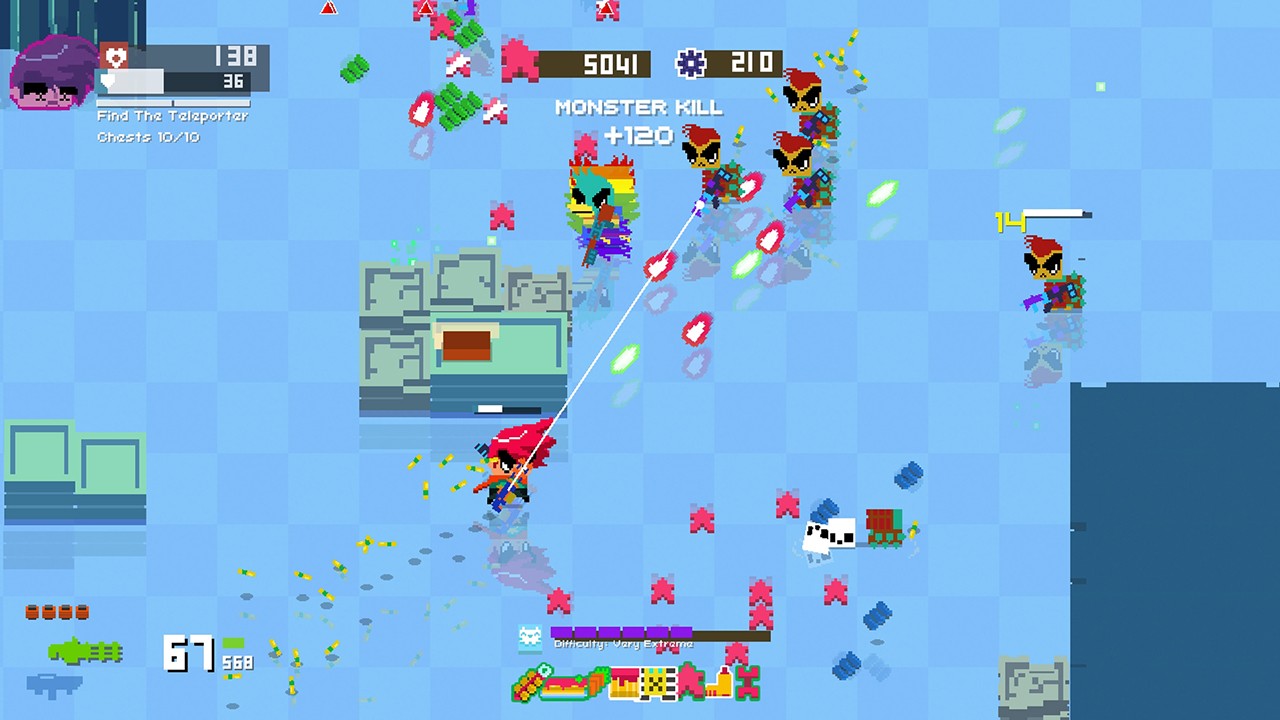 It’s been a minute since I’ve last seen a twin stick shooter on the Nintendo Switch, and my thirst has been quite high: twinsticks are those wonderful, guilty pleasures you enjoy when mayhem in gaming just isn’t coming fast or furious enough. From Isaac to Gungeon, Nuclear Throne to Blazing Beaks, I love them all, and they always bring something different to the table. Rogue Snail has made quite the name for itself with it’s free to play twinstick, Relic Hunters Zero, which, apparently, is a prequel game they made for some upcoming releases. The game, which has been available on Steam, has received quite a few updates over the years, and the recent partnership with Akupara Games has promised fans that there’d be even more for the future. As a one two punch to both appease longtime requests and prepare players for what’s coming down the pipeline, they’ve taken their beloved game, given it an upgrade through various aspects, and ported it to the Nintendo Switch. Players now have a new co-op shooter to enjoy with Relic Hunters Zero: Remix.

The concept for Relic Hunters Zero should come as no surprise on surface level. You play a colorful hero, who is part of the Relic Hunters group, and you’re dealing with the evil empire of the Ducans, duck-like beings who are hunting the Relics for their own evil agenda. The game, unapologetically, centres the entire storyline around a basically endless gameplay, in which you hop from procedurally generated asteroid to asteroid, trying to find out if Relics are buried there for the taking. The Ducans are mirroring your approach, so you end up doing combat with them everywhere you go, and, frankly, a lot of time the combat is pointless, as not every locale has a Relic piece waiting for you there.

There’s a bit to unpack here, so bear with me for a bit. Relic Hunters Zero Remix is, without a doubt, a mostly same-same version of the game that’s free to play on Steam, make no mistake. Yes, there are some improvements, and the list is decent. The soundtrack is updated with new low-fi sounds, and that will be welcome to longtime players of the game. There are new weapons that are added in, but the weapons were inspired by the community mods: much like the Booster Packs from The Binding of Isaac, these are tried-and-true things that the player base has ferreted out and deemed worthy. Also, there are extra skins for the unlockable characters, and, in the same vein, there’s a fair number of characters to unlock. There’s an achievement system that, while constrained to the app’s own sandbox, is still fun and worth exploring (I got a HUGE kick out of the Are You Serious achievement). Lastly, this is a console port: I won’t pretend that porting an existing game to the Switch is an effortless deal,  no matter how flushed out the game is beforehand nor how easy Nintendo’s infrastructure is to explore. Work had to be done, and the end result is a mostly good port. Mostly. 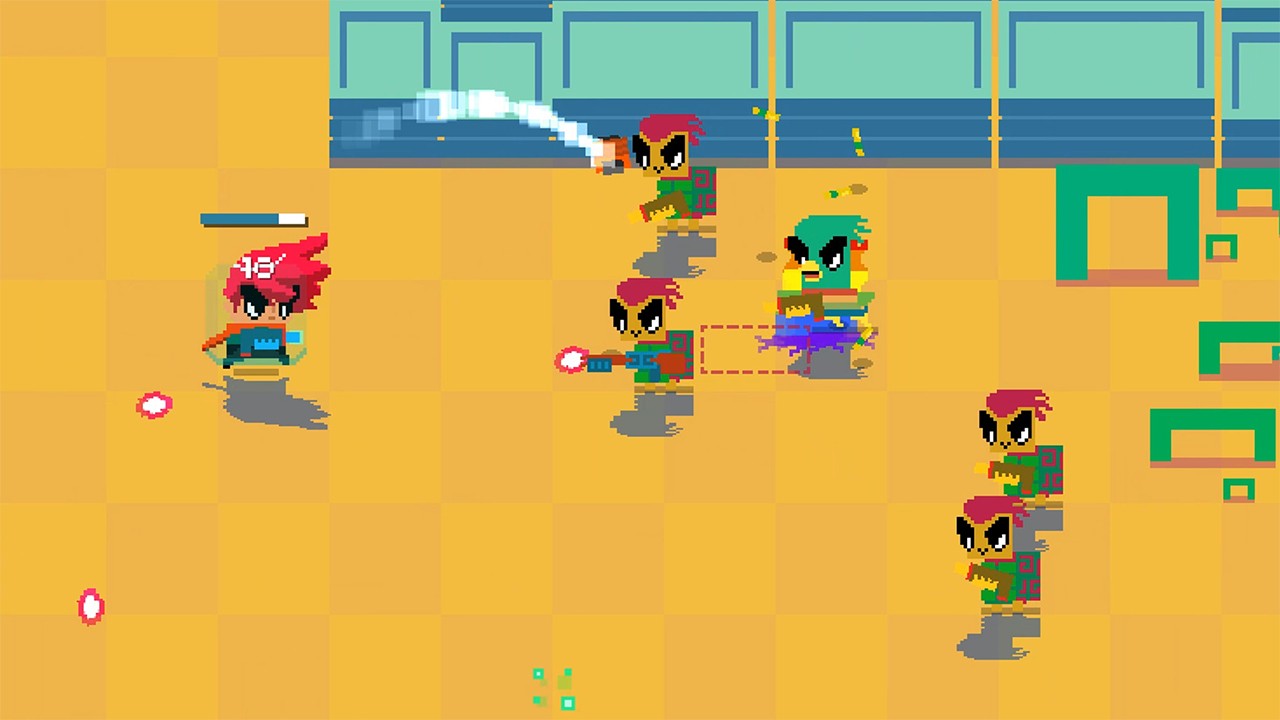 So how do you play and what do you do? Relic Hunters Zero Remix allows you to start from level one all the way up to level four of your exploration, depending on how much of the game you’ve unlocked. You end up on a procedurally generated floor where weapons, obstacles, ammunition and enemies have been created in different patterns. You move with the left stick, aim with right, shoot with right shoulder and swing a mean melee attack with B. Enemies becomes progressively stronger, smarter and more aggressive, starting off with simple pistols and evolving into grenade chucking, sniper rifle wielding, dash dodging bastards, and those aren’t even the boss yet. Killing enemies can cause them to drop ammo, occasionally weapons, and some Bounty, which is a currency that’s used for different purchases both in game and between games. Bounty multipliers exist for kill streaks and accuracy, and more Bounty is good, but you already knew that. Upon finishing up the last enemy on the screen, you may or may not detect a nearby Relic piece. No piece, whatever, teleport out and go to the next stage. If a Relic is somewhere around, you use a primitive sonar system to pinpoint where it is, at which point you mash the Y button to dig it up, getting some additional Bounty in the process. It’s a game where the concepts are simple and it just builds upon it as you get further and further into the game.

For the good points, Relic Hunters Zero does what it does incredibly well. It feels like a cleaner, kinder version of Nuclear Throne, at least in terms of presentation and execution. Whereas Throne takes place in a mutated wasteland, Relic Hunters Zero allows for many variants of colorful protagonists (even without the additional skins) and a very fun, bright atmosphere that projects “entertainment” and not “childish.” The shooting is fulfilling, mixing in equal parts ammo storm with duck-and-cover gameplay, and it works out incredibly well. Players who simply charge headlong into battle will get killed, even though you’re equipped with a rechargeable shield from the very beginning. Instead, you need to get down the timing for dodging and aiming, taking careful potshots and timing things out well to maximize your bounty and mayhem. The grenades, which you have a limited number of, do a great job of taking out creatures off screen, and you need to get good at understanding the timing of shooting, taking a couple hits, and waiting things out till your shield recharges, knowing that the enemy could be doing the same. When you feel super confident, you can actually use the ZL button to open a laser sight to pinpoint where you’ll be shooting next, helping you rack up those combos and additional Bounty. Sure, health packs and ammo exist, but do you really want to limit yourself and end up out of bullets and forced to clobber your way to the next asteroid?

Relic Hunters Zero: Remix also does a stellar job of the roguelite elements incorporating plenty in terms of drops, mob variants and spawn weapons. It can be tough, quite frankly: there was a run where I went through three full stages without a second weapon appearing, making Jimmy’s run very difficult with just the standard pistol. However, in that same vein, I got three Relic pieces in a row on my very first game, which set the bar impossibly high for how much treasure I’d get in the future. Besides pistols and assault rifles, you’ve got shotguns, submachine guns, sniper rifles and more, including my personal favorite, the keytar (Raff is so freaking fun to play as. Also, the Ducans, as big of pains as they are, aren’t the only things to contend with, which creates fun AI moments. When there are a lot of native monsters on an asteroid, you can usually convince the different mobs to fight each other, giving you a bit of a reprieve (and letting you pick up Bounty if you’re fast). There’s the random element to it all that makes it fun, and it keeps true to its mission statement, so good on Rogue Snail for that one. Also, if you want to turn the tides a bit, all those Relics you collect can be toggled on and off as additional passive bonuses, so don’t just always leave it up to fate. Feel free to add extra HP or more shield if you would prefer to have the edge (I always did). 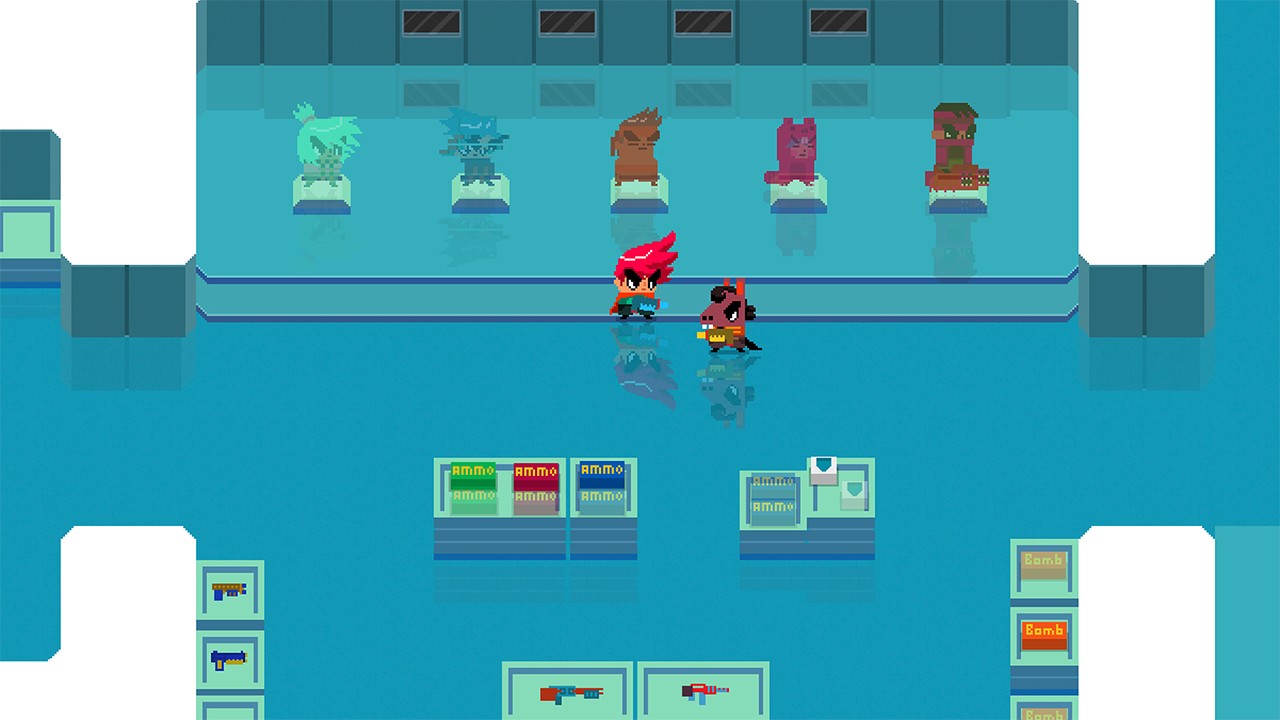 However, there are two issues with the game, and they impact the long and short form of things. The first is that the Switch port does have a strange but frequent error: the sleepy Y key. The Nintendo Switch really allows and even urges players to take breaks anywhere, anytime by simply turning the screen off, creating easy and affordable pauses with nary a second thought. But Relic Hunters Zero Remix often bugs out when the game goes to sleep, and the Y key doesn’t wake up. While it’s not a huge deal during a firefight, it makes it impossible to move on, as the Y button is the multipurpose for picking up objects, digging up treasure and activating the teleporter to move to the next stage. You’re stuck, and you often just have to quit the run and start over again. Usually small glitches are to be expected, but this is a big, really depressing glitch that makes the game unfun to play because, well, I don’t want to keep starting over and over again.

The second is that Relic Hunters Zero is, by nature, more fun with friends. The solo attempts at things like the normal adventure mode, the Storm mode and the Daily runs are good, don’t get me wrong, but the entire Endless campaign feels boring without someone else by your side. In the same vein, a second player creates new dynamics and more buddy mentality on being part of the Hunters. You want to go scour the universe and find treasure with a kickass companion by your side, and the couple of times where I convinced my daughter to grab a bluetooth controller and join in were super fun. Sadly, it’s difficult to get people together for in person gaming currently, and online is definitely the tone of the world right now. Hopefully Relic Hunters Zero: Remix can hang on until the whole “don’t go outside” thing clears up and then more people can enjoy it together.

But damn, is it fun. Relic Hunters Zero: Remix is a sincerely fun and exciting little shooter, full of cool weapons, plenty of exciting combat and tons of Relics to hunt, each and every run an adventure. I’m sure the sleepy Y button problem can be patched out, and, if Steam represents a 1/10 of the attention it could get on the Switch, then players are in good hands. The price is nice, the content is robust and it sets the stage for an exciting and dynamic future. Go on a treasure hunt, and shoot anyone who gets in the way!

It takes brass balls to bring a free-to-play game and port it to the Switch as distinctly not free, but quality content deserves to be purchased.