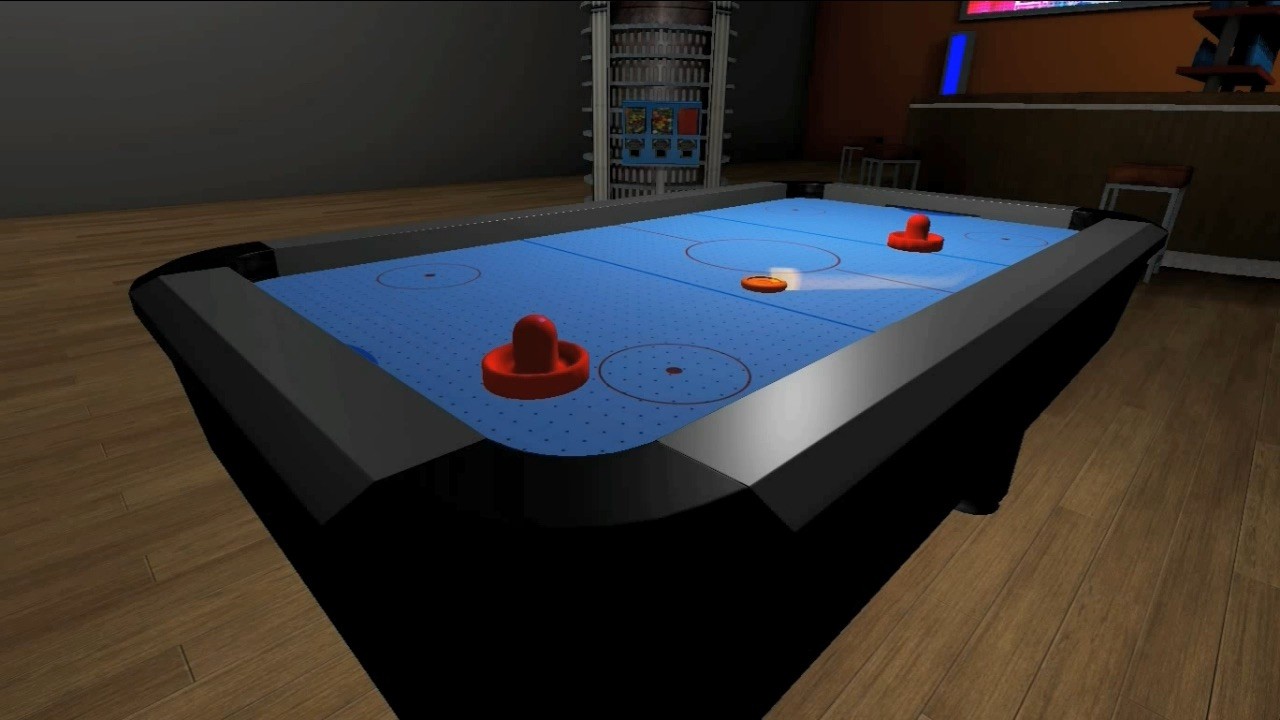 Air Hockey tables have been a staple among amusement arcades for decades. The principle is apparent when seeing one, you use a paddle to hit the puck into your opponent’s goal across a low friction table. The first person to score seven points is the winner. It’s a simple concept yet can prove a real test to the player’s reflexes. They’re an absolute blast to play, giving a great sense of satisfaction to the victor.

It has always seemed a natural fit for this concept being introduced into the video game industry, which it has for a multitude of console generations. What else feels more complimentary is having it on a system that is renowned for multiplayer and is easily portable. This brings us to Air Hockey on the Nintendo Switch, developed and published by Sabec. It was released February 28th, 2018, through the Nintendo Store; requiring only 138mb worth of storage space.

Air Hockey’s lack of bells and whistles becomes immediately noticeable when you’re faced with a silent menu and a demonstration of the game running in the background. You can choose between three options: single player, two-player (local coop) and adjusting the AI level. The difficulty is represented in as three levels, 1 being the easiest and 3 being the hardest, of course. 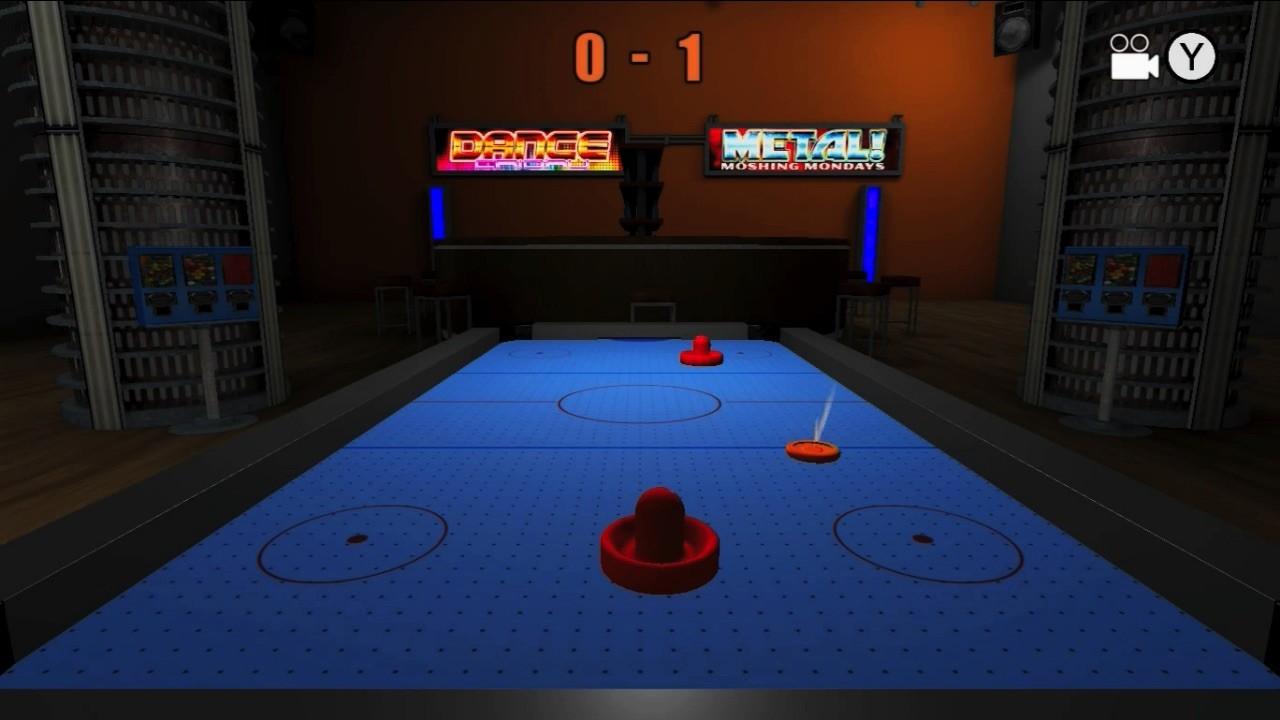 Matches begin as a smooth transition straight to the table. Zero loading times. You’re brought into a game within a 3D background environment. Be well accustomed to seeing a vacant game lounge, that is the only setting in the game. Providing little atmosphere to boot. This presentation is also hampered by the lack of sound besides the puck and table itself. You can hear the shots and goals echo in the room, that’s everything you’re going to hear in this entire experience.

As you can imagine, the control scheme for this type of game is far from being complex. Analogue sticks alone come into play unless you wish to exit the match. The controls are responsive and how the puck moves along & rebounds along the table react exactly as it should. There’s a big downside to the gameplay, using the paddle doesn’t feel fluid enough.

When playing, a part of the enjoyment is being in control. Able to put yourself in a position to counter the opponent. Instead, the movement is awkward. You’re not really playing how you’d expect or better yet, desire to play it. While the puck scatters along with the screen, the goals seem more like a good or bad shift in fortune. What input you do have isn’t enough and that leads the outcome of the match to be entirely down to luck itself. Every match I won and lost, I don’t believe gives a true interpretation of my actual skill. 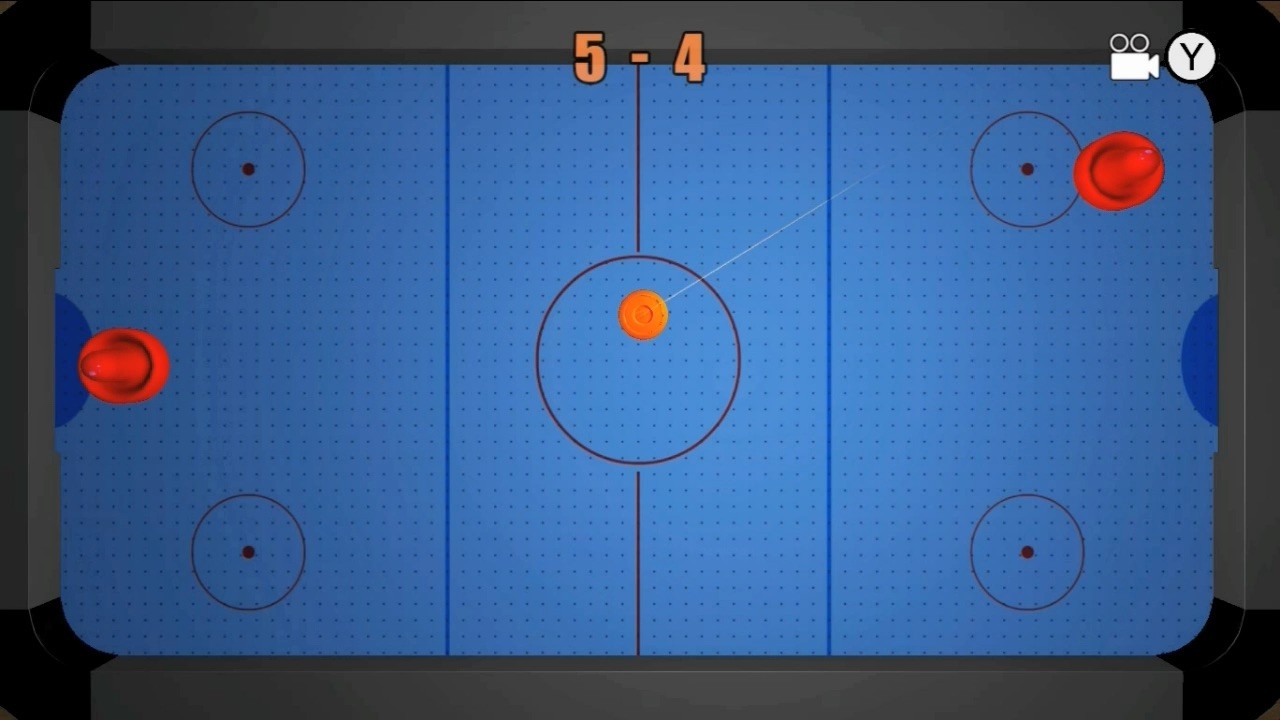 Sabec may have benefited in using motion controllers, as a better alternative for Air Hockey. The Joy-Cons themselves would be far better suited to this and I’m surprised this isn’t an option. Then again, I am surprised how little options there are. Some of the gameplay issues may have been improved by offering tweaks to the controls sensitivity and movement speed. Lacking such customisation forces players to try and adjust. After playing four to five hours worth, I’m still no better for investing that time.

Playing with a friend is marginally more enjoyable, there is a laugh to be had but will serve as nothing more than a momentary distraction. A couple of matches and that’s your fill. Ultimately, Air Hockey is an attempt to recreate and doing so half-heartedly. The absence of music for one is what you’d expect out of an unfinished product. They’ve successfully created an HD visual representation of a classic amusement, however, that’s on the visual front. There’s a lot needed to justify paying the full asking price.

Air Hockey is not a game I’d recommend, for anyone still interested in acquiring it, I’d advise waiting until it is listed in the discounted sales. Which it frequently is and for good reason.

Air Hockey is an attempt to recreate and doing so half-heartedly. The absence of music for one is what you’d expect out of an unfinished product.