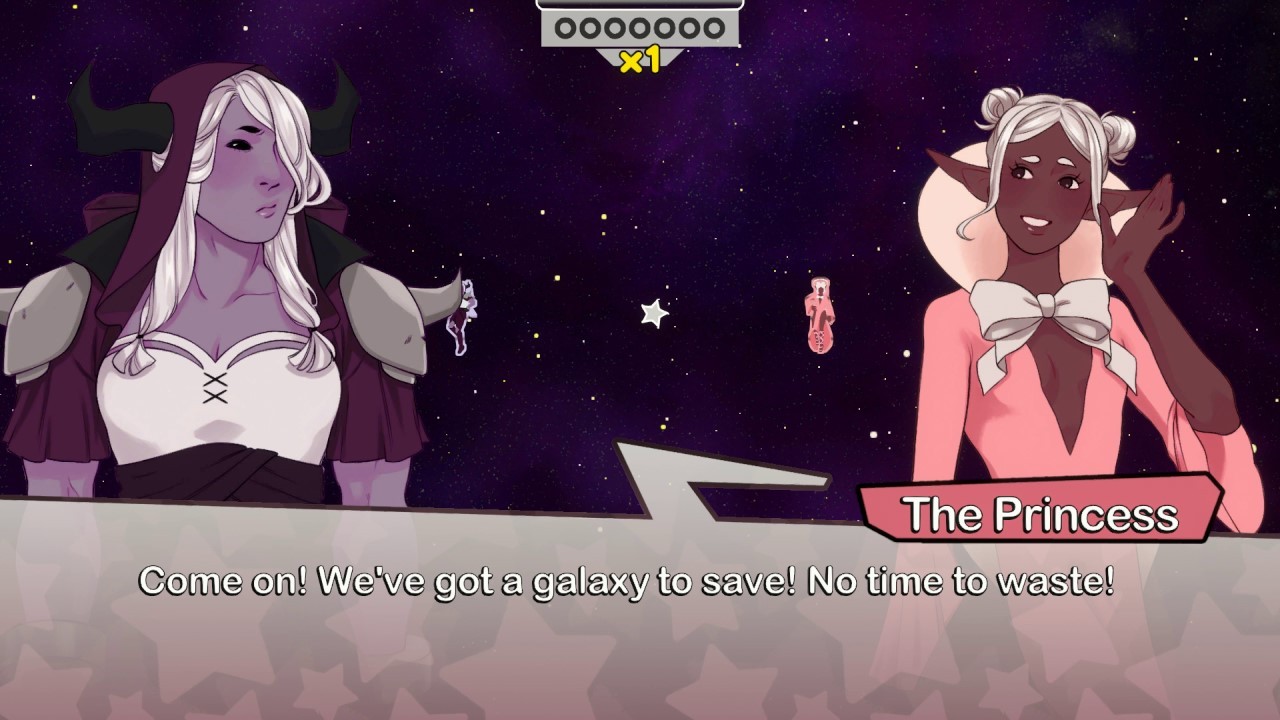 Delve into a futuristic magical world, filled with powerful women who defeat monsters, by strangely playing a heightened version of Pong. Developed by Contingo Games, Starcrossed is described as a new, all-inclusive magic girls game. But is the game as enchanting as it looks? Let’s discuss.

The story of Starcrossed centres around a mythical object called the harmony crystal, which has brought peace and prosperity to the universe for thousands of years. Every hundred years, the crystal is proudly displayed as a reminder of the universe’s coming together, however this year it is stolen by a villain dubbed ‘the scientist’. A cast of five characters arises with newfound magical abilities, these characters are dubbed harmony guardians with titles such as The Hero, The Princess , The Outlaw, The Weapon and The idol (to name a few) are tasked with retrieving the crystal before the universe is thrown into unbalance. The story is rather fun and whimsical, it’s not overtly complex sure, but there are elements to it that are interesting; uch as the universe coming closer together, in both a metaphorical sense and a literal sense, for the lore of this word has literally drawn the different galaxies in the universe closer together. I do wish there was a little more meat on the bone, maybe more depth into the Scientist especially, as they are very much a caricature archetypal villain. In fact, the only characters I felt were truly fleshed out was The Outlaw and The Princess. 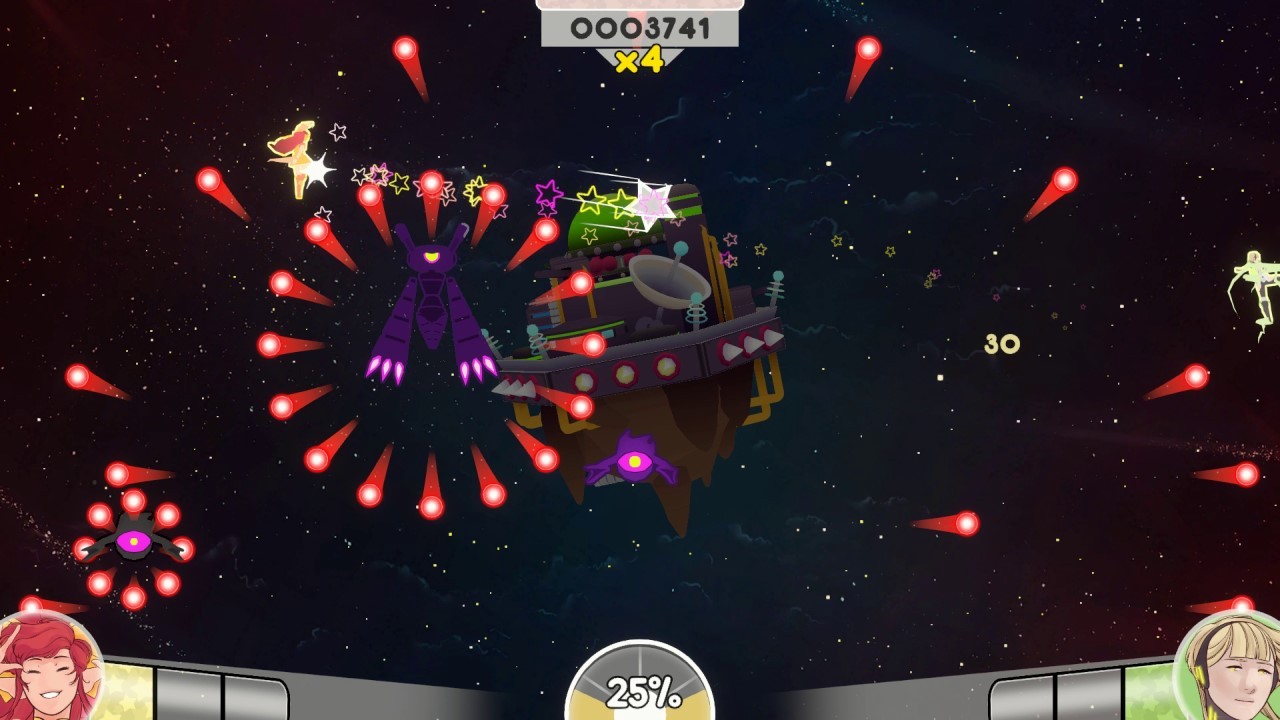 The gameplay is sadly where Starcrossed falls short. As I stated in my opening, the game is effectively PONG with a 2020 filter over the lens. The game is local multiplayer, which was my preferred method of playing, but you can play on your own too. You will take control of two characters, starting initially with The Hero and The Idol, and bat a star fragment back and forth, with the aim of ensuring the monstrous creatures between the two get hit. As you may suspect, this gets very tiresome, very, very quickly. So much so, that I felt as if I were imposing on my roommate asking them to keep playing with me for the purpose of the review. However, if you are alone, you can also pick up a copy, but just be warned, it can get a bit more challenging.

I do have two big gripes with the gameplay. The first being the fact that each health bar is not connected, although it may as well be, for one character cannot play the game without the other. So, say The Idol has one life bar left, and the Hero has two, if the Idol dies, the Hero dies instantly, with no chance to continue or to revive the other character. It’s just a small thing, but I just found myself thinking ‘what was the point’ of not having a shared health bar, if one can’t play without the other. Now, there is the chance to get some extra health, with the occasional pop up that would spawn every now and again, but these came few and far between, which again was just a weird choice, if you had to rely on each other. Speaking of spawning, the enemies would often spawn along the periphery of the screen, thus making it literally impossible to defeat them! Again, it had me screaming. WHAT. WAS. THE. POINT.

Something I will commend the developers on is how each character felt different.This ranged from special abilities to their design. Each character was unique, but still fit into the created world perfectly. The special abilities where in fact, the only parts of the gameplay that I really enjoyed, although it was very much a novelty after a few go arounds. The most useful of these special abilities is perhaps The Outlaw, who will allow the star to grow and become heavier, thus doing more damage to your opponents. And again, the artwork and graphics of this game is truly impeccable, everything from the characters to the environment is designed with such a vibrant joyous flare, that it does feel very whimsical. Something that does ring true, is that the game is incredibly diverse, featuring women of all different sizes and ethnicities, and even features a non-binary character. So I am very much please to say, that by all accounts the game is super inclusive, a rarity in both video games and the fantasy genre. 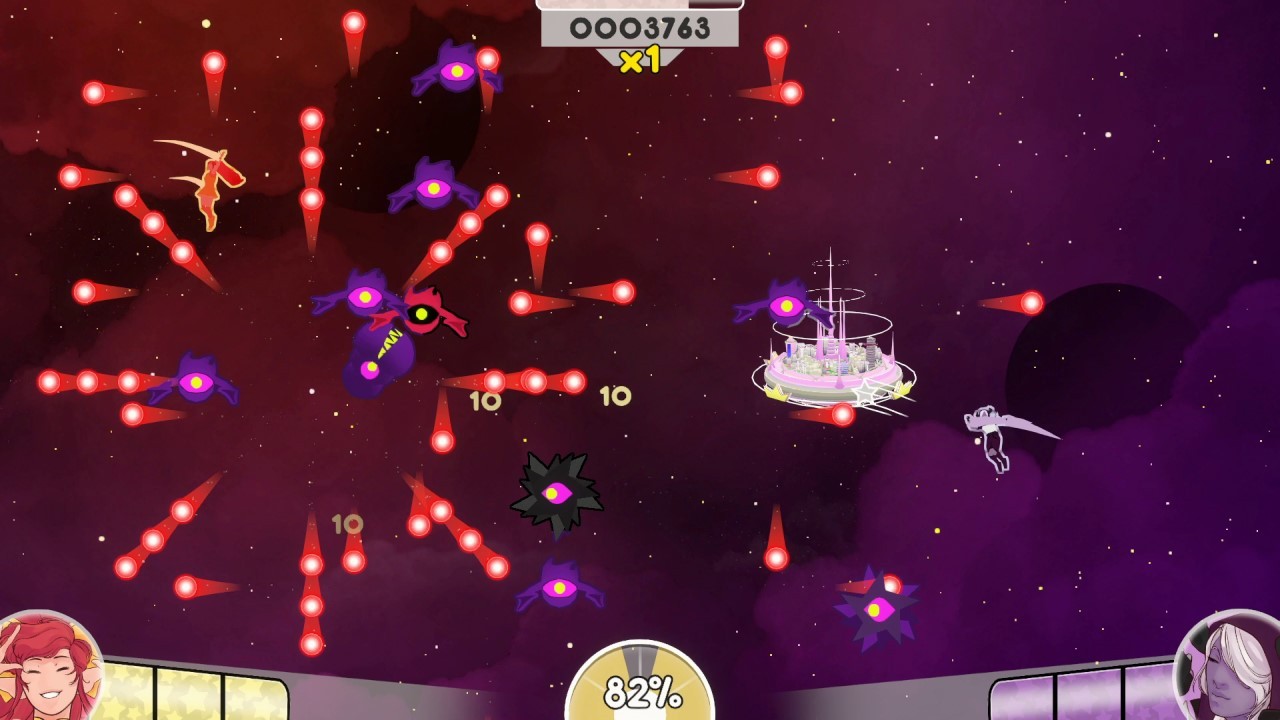 Now, if you’ve read some of my previous reviews (if so… hey) then you will know that I often find repetitive music to be the most irritating part of any game, like it can really get under my skin. However, whilst the music featured within Starcrossed is repetitive, there is something about it that just adds to the world, that I can’t fully hate it. Don’t get me wrong, there were times where I’d play with the TV on mute, but I do that for a lot of games really. If I had to summarise the music I would say it lies somewhere on a scale between Meh and Generic.

To wrap this up I would like to talk about the positives and negatives of the game. Let’s get the negatives out the way (with all due respect to the developers) this game, just doesn’t feel like a console game, but rather feels like a game you’d play on your phone. There just isn’t a lot of substance, and when the gameplay is the feature that lets the game down, it’s just not a good sign. However, on a positive note, the game is so well designed and I am always in favour of more inclusivity, and it speaks so well for Contigo that they would back a project such as this. Additionally, whilst this game may not be my cup of tea, I think it would be a great game to play with a younger gamer, or someone who may be looking for something more simplistic.

The game is so well designed and I am always in favour of more inclusivity, and it speaks so well for Contigo that they would back a project such as this.