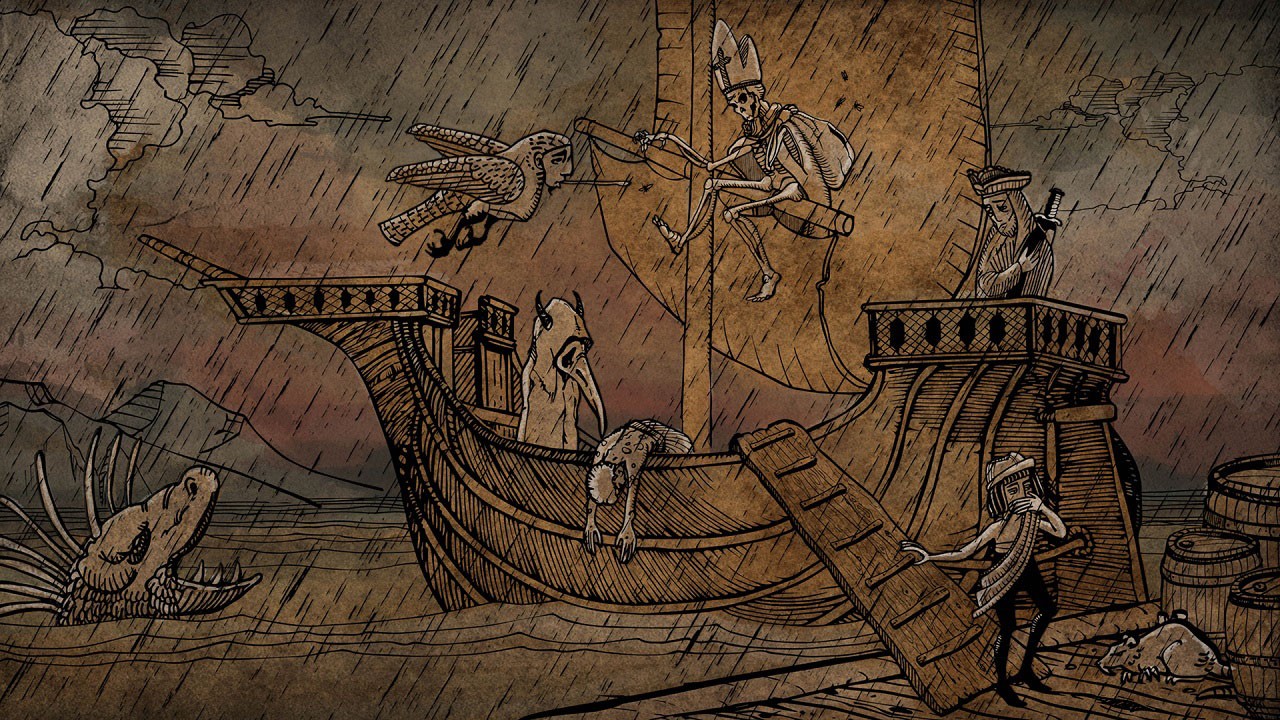 Apocalipsis is a point-and-click adventure game inspired by wood engravings from medieval Europe. That sentence is all you need to know whether this is your jam or not: history, adventure, what’s not to love? The game follows Harry, and he’s on a journey to rescue his girlfriend/wife. It’s never that simple, though. Puzzles — there are lots of them. It’s a good game if this is the sort of title you normally go for; although, it’s not well suited to the Switch, and at an hour-ish long, it isn’t a lengthy experience.

Let’s start with the art: it’s gorgeous. It realistically represents the 15th-century engravings it models itself on. As you navigate the world as Harry, the mix of browns and dark and moody blacks creates a desolate, hopeless atmosphere (it is called Apocalipsis, after all). It doesn’t deviate from this style, but there’s no doubt that it fits the bill for the end-of-the-world vibes the creators were going for.

Speaking of which, the game’s environments span from a more realistic overworld similar to our own to an underworld full of nightmarish creatures seen in the likes of Dante’s Inferno. Witch huts, torture chambers, castles, Apocalipsis runs the full gamut of medieval misery. And as Harry advances further underground to save his beloved, the scenery gets increasingly eerie. 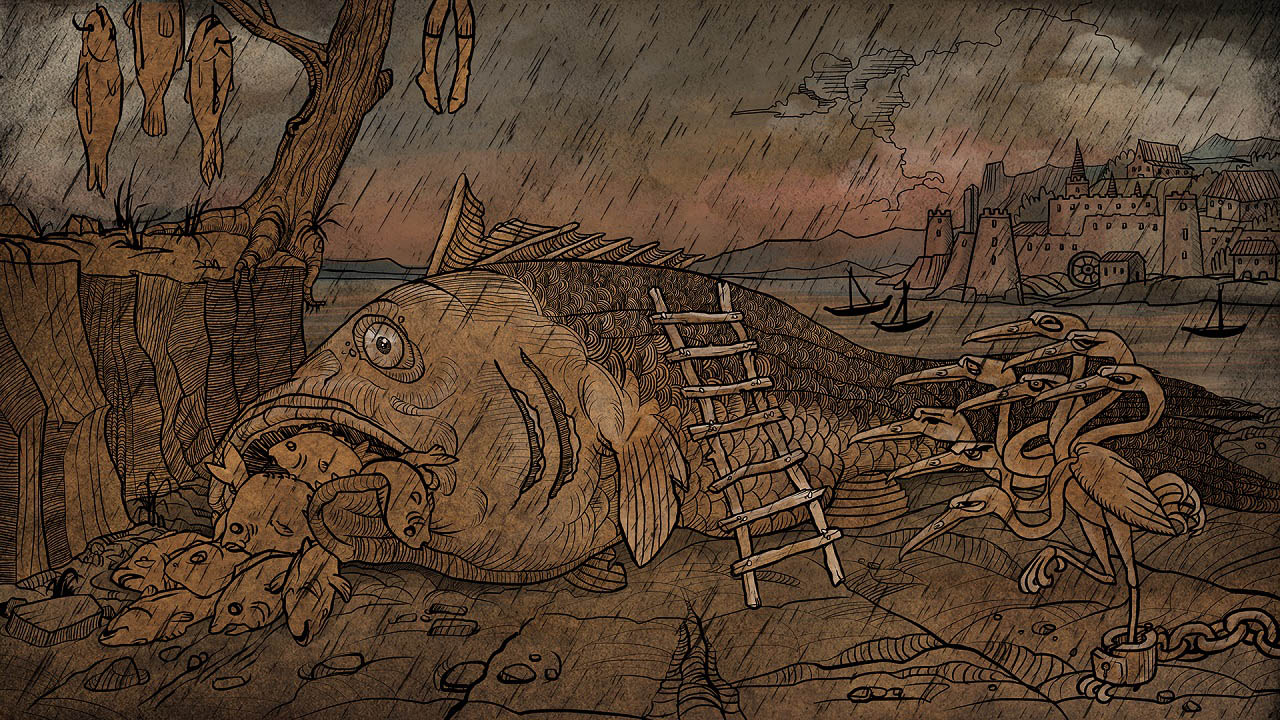 The sound design accompanies this perfectly. Many times throughout my playthrough I had to take my headphones off. Was that my door? Are my neighbours encased in an iron maiden? The game is only voiced via cutscene narration; the characters themselves do not speak. I did, however, have to turn down the volume in every cutscene before my ears exploded due to the narrator being strangely louder than the game. In any case, screeching metal, barking dogs, and clunking around on the deck of a ship in one particularly memorable level will have you sufficiently immersed in the experience.

Any goodwill the game built up with its sound and graphics will be thrown out the window when you experience its controls on Nintendo Switch. It’s a point-and-click adventure, point and clicking is a given — but this is literal on the Switch version. No work has really been done when porting Apocalipsis from PC: the mouse cursor is controlled by the left thumbstick and it must be slowly moved around the screen to see what you can interact with. This isn’t an issue on PC, where you can control the speed of your mouse, but it detracts from the console experience quite a lot. You can press ZR/ZL to remove the cursor from the screen and take direct control of Harry, but you can’t interact with the world or puzzles that way.

Puzzles. The gameplay is all about solving puzzles, and they’re mostly environmental, with some minigames sprinkled in. One puzzle will have you collecting items to perform a ritual, while another has you putting an organ back together — an organ made of human bones. Collect items, use them on objects in the environment in the correct order, then be on your way. There are some symbol-based puzzles too, where you rotate dials or move blocks to align them in the correct order, but these are less common. 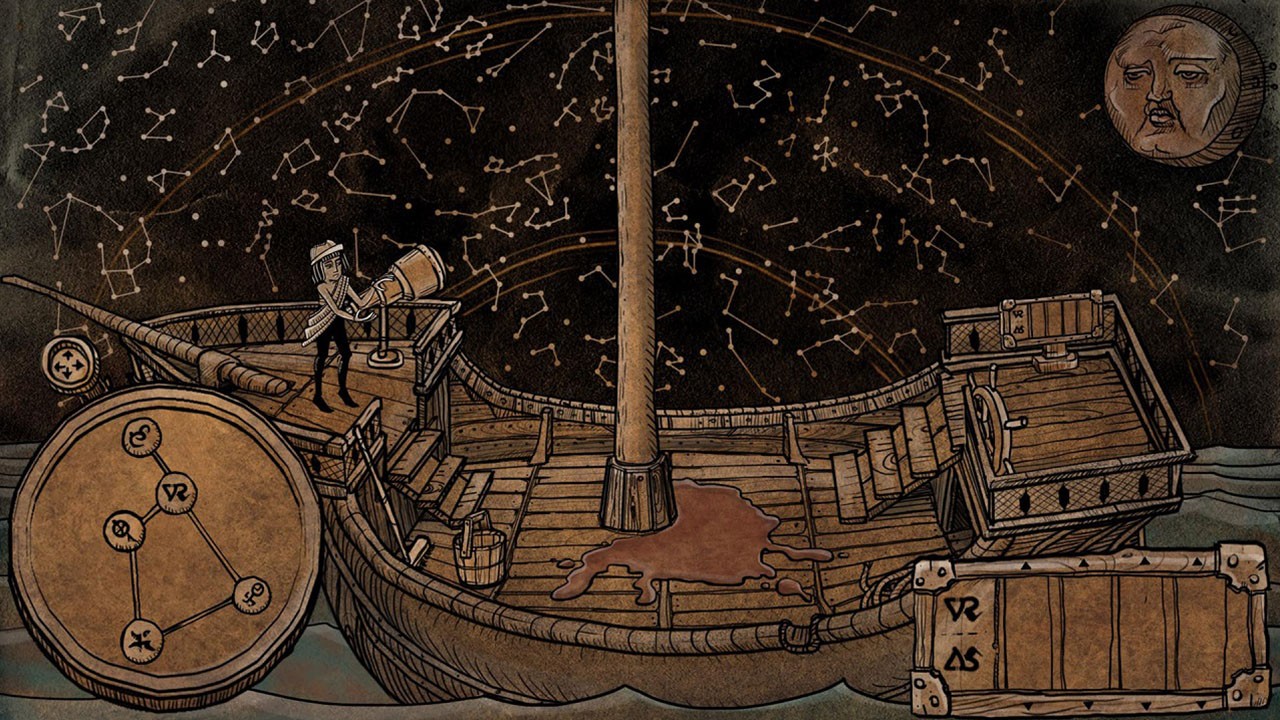 Because the characters are not voiced, the story is delivered through physical events, short cutscenes, and assumed subtext. This both plays to its strengths and weaknesses. On the one hand, you get to soak up all of Apocalipsis’ grim atmosphere, contemplating what it all means; on the other hand, because the story isn’t explained, you can be left wondering what exactly just took place on-screen. This feeling is exacerbated by the abstract blurring of lines between the real world and the world of medieval beliefs. Are those demons literal or metaphorical?

At an hour-long, there isn’t much depth to Apocalipsis. There aren’t any choices: you just strap in, solve the puzzles, enjoy the world, try to work out what’s happening, and then you’re done. Saying this, it doesn’t feel too short in a technical sense. The game’s length feels appropriate for what it’s doing, but if the game spent more time elucidating the story a bit more, it would have made for a better overall experience. Even after completing Apocalipsis, it’s left me with questions about what actually happened, and what it was all for.

Apocalipsis is an enjoyable adventure game with a historical setting not seen in many games. And on that premise alone it’s worth playing. If you lack an interest in adventure games or are particularly averse to medieval history, however, then this might not be the experience you are looking for. Due to the controls, this is an experience best had on PC, and its short length could also be a factor if you’re looking for something meaty to sink your teeth into. On the whole, though, it’s great to see developers trying new ideas and settings for their games, and this is one of them.

An adventure game with a unique historical setting and art style, Apocalipsis is an interesting but short experience, with controls better-suited to PC than Switch.