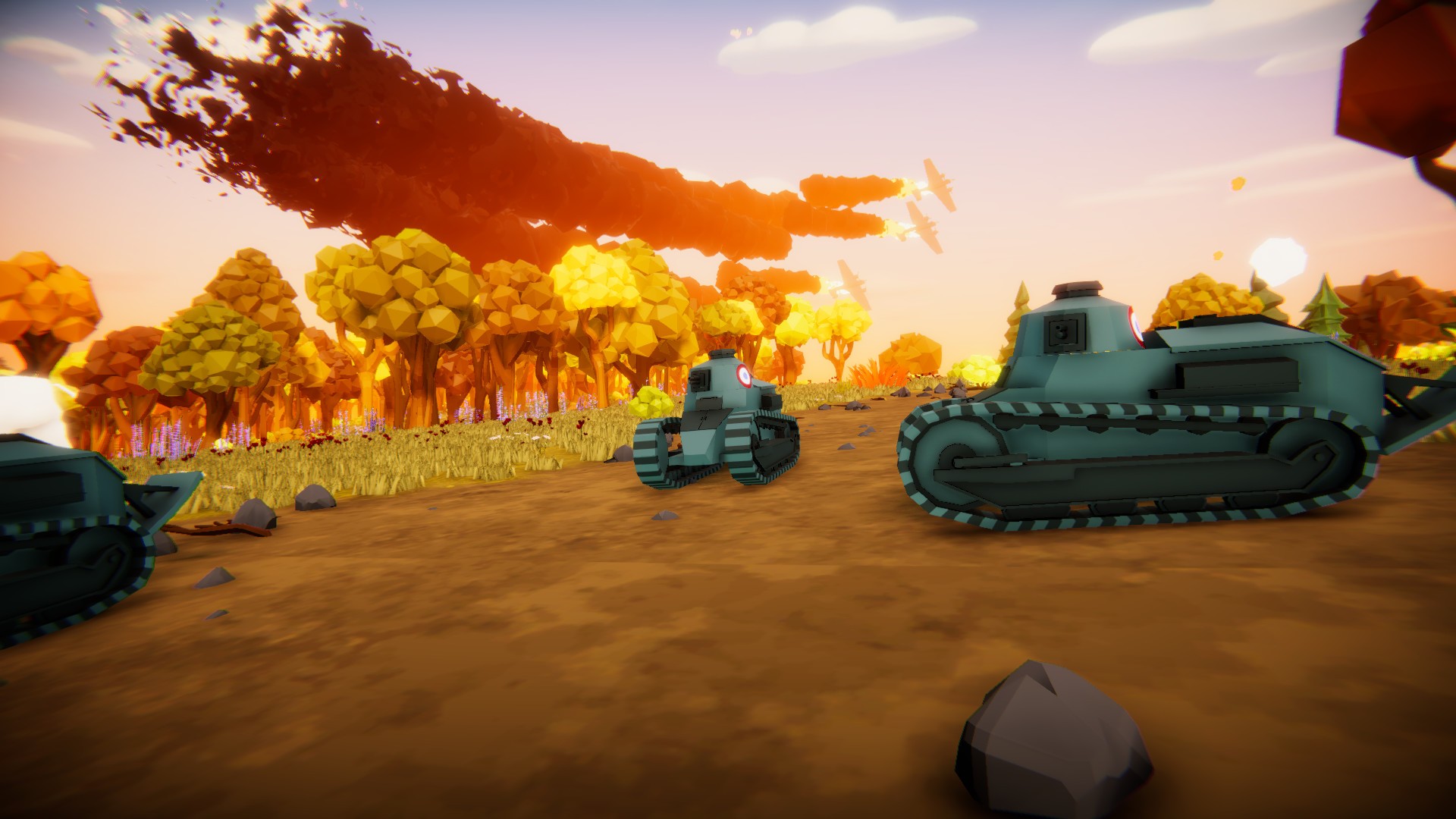 Total Tank Simulator was published by 505 Games and came out on May 20, 2020. It’s a strategic WW2 battles simulation game where you take control of your units on the battlefield. It shares a lot of similarities with games like TABS (Totally Accurate Battle Simulator) or UEBS (Ultimate Epic Battle Simulator), but I personally feel that in a lot of mechanics it goes way more in-depth than those games.

When you first start the game you’re greeted with the menu screen that presents you with the game’s main game modes. There’s a lengthy tutorial mode containing 4 different tutorials that all teach you the basic controls and how the game works. I’d recommend anyone to complete the tutorials before moving on to any of the other modes as the controls are quite complicated and the basic mechanics differ from a lot of other battle simulators.

On the other hand, the graphics in this game are not too different from what you’d see in Totally Accurate Battle Simulator. Each character has a polygon like-design and the environments look almost hand-made similar to papercraft. Overall I think that the game looks really good and some of the environments are quite graphically impressive. However, this along with the number of units on screen often takes a toll on the performance. With that said, the graphics and effects (explosions, environment damage) are still very well made. 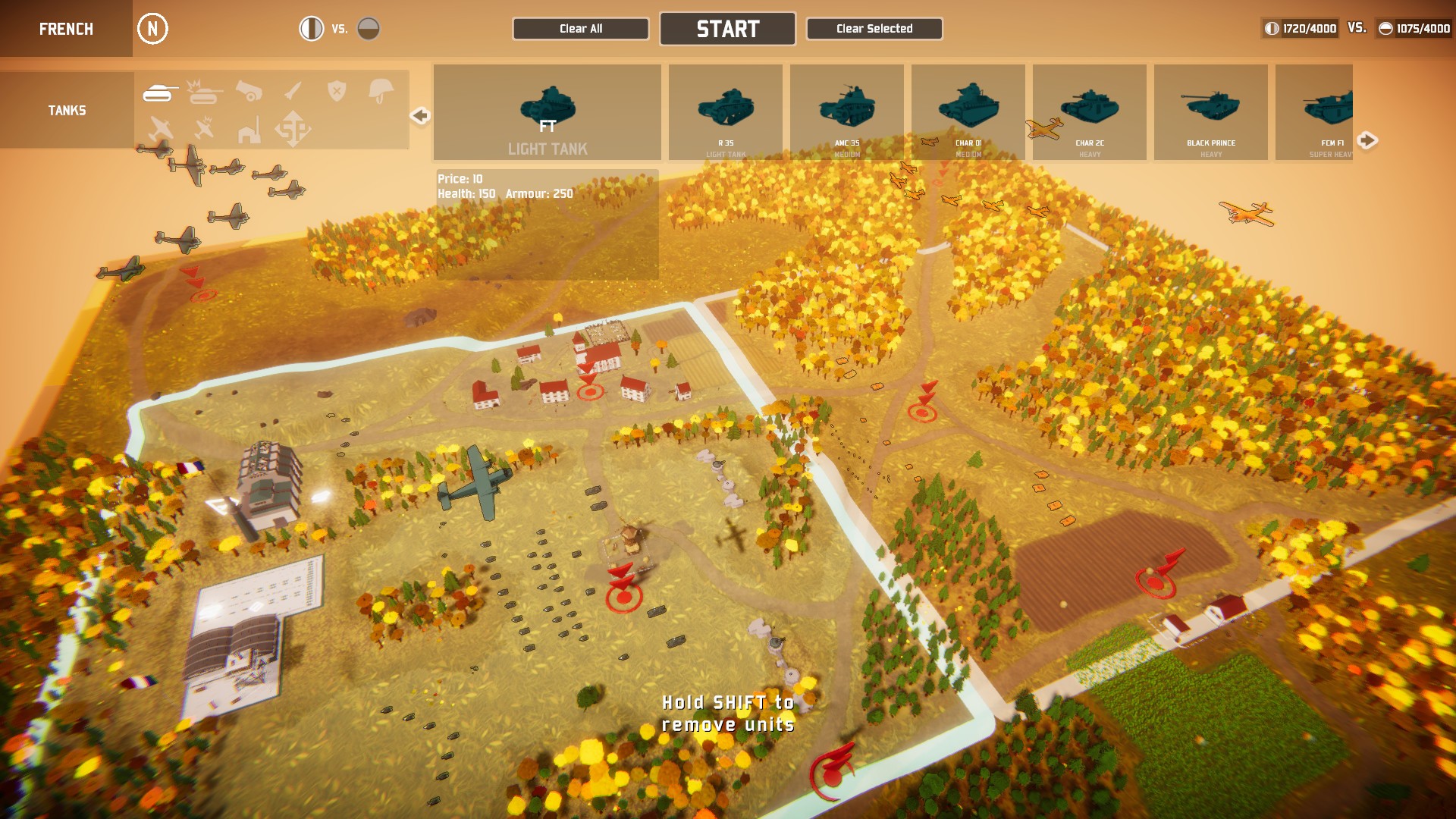 Moving on to the gameplay, this game features 3 main modes excluding the tutorial modes: Campaign, Shadow and Sandbox. The campaign mode features 6 different states: France, Germany, Poland, Britain, USA and USSR. They don’t differ too much from each other, except the maps which are different for different states. They consist of a 2 square grid and are quite large, but I still feel like for a proper WW2 tactics simulation game they should be a bit bigger. The actual campaign consists of taking over certain points in the map and is divided into acts. In each level you deploy your units which are different for each faction and then attack the opposing team. The problem with this is that without you controlling your units, the AI for them gets them destroyed pretty quickly as they charge into battle as fast as possible and have little health. Controlling them on the other hand is really fun as you get to play with different weapons, command tanks, play as infantry, etc. This game doesn’t only feature tanks but also planes, artillery, land mines and all kinds of weapons used in WW2.

Overall the mechanics and units are pretty realistic and feature tanks that were actually used in that time period. There are of course a couple of exceptions, similar to TABS, with one of the Russian units being an armed bear or other wacky, unrealistic weapons. Most of the units like the tanks feature a dedicated crew of their own and have realistic shooting elements like recoil, bullet drop, etc. As I mentioned before you can take control of every unit on the battlefield, significantly increasing your chances of success, the controls for these units, although quite complicated can be memorized easily. In case you don’t want to be involved in the battles you can always view the battles from above with the game featuring multiple camera modes and even a separate cinematic mode. In the campaign mode, you gradually unlock powerful units while you progress through a skill tree (or rather a tech tree) in-game. The 2 other modes are a bit different. The core gameplay remains the same, with the objective being taking over the points of interest and defeating the other units, but in Sandbox mode you get unlimited funds and units, basically allowing you to customize your own battles and also fight them. In my opinion, this makes the Sandbox mode the most fun out of all the modes. The 3rd mode, Shadow is also quite an interesting concept, with you building new armies and then fighting all the previous ones you built on each level in order to achieve the “perfect” combination of units. In each mode, I found the gameplay really enjoyable and it’s certainly really fun to play around with. 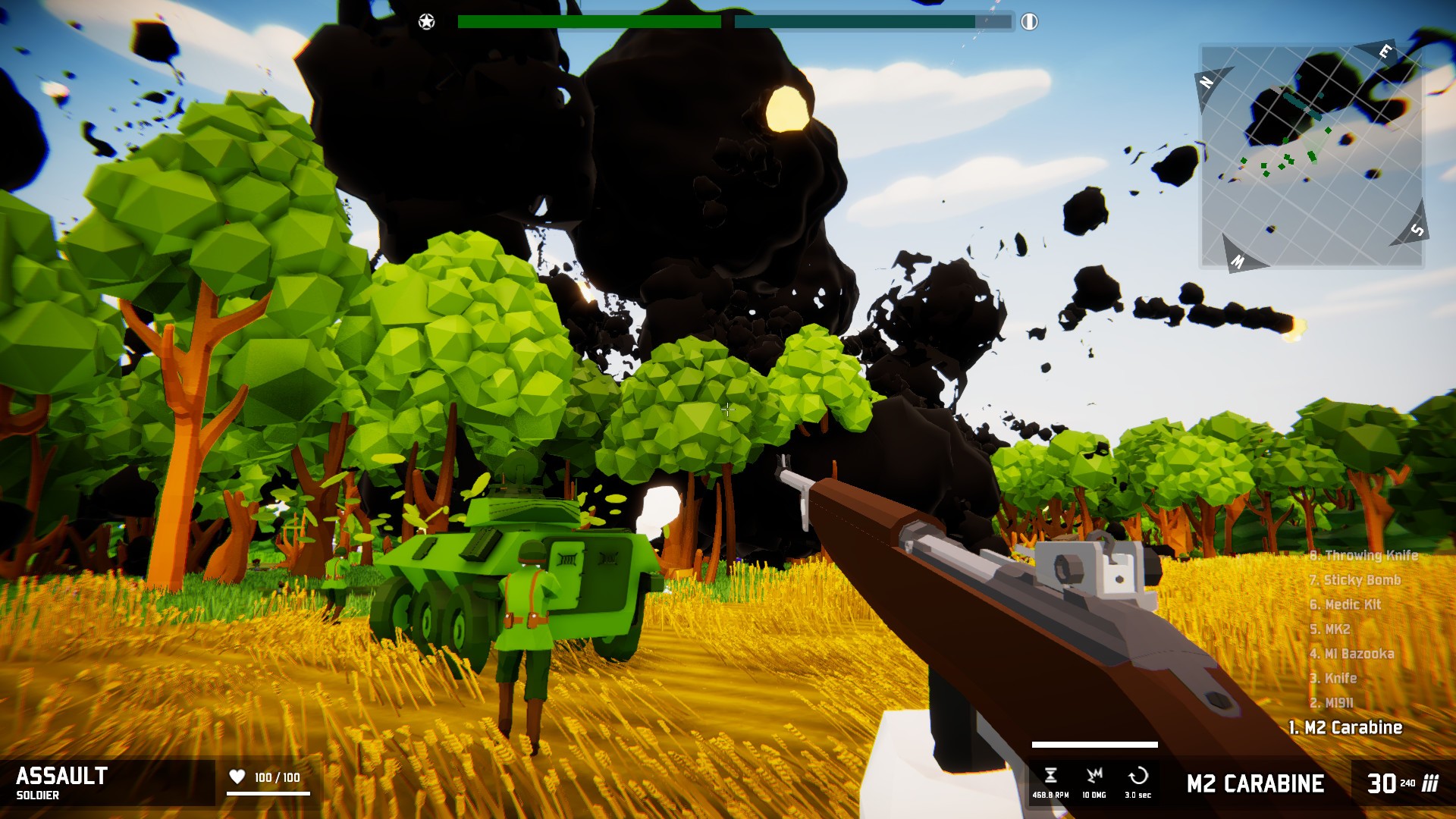 Accessibility wise, I’d say this one is a little bit difficult to get into just because the controls are quite complicated, but still, after completing the tutorials and a couple of games in sandbox, anyone can have fun.

The sound design on the other hand is great and features some really powerful battle themes on the soundtrack blended in with some rock instrumentals. The sound effects also have quite the impact showcasing the kickback that every shot and explosion has in the game.

The replayability in this one is also great as the different modes offer hours and hours of content, with the sandbox mode offering near endless playtime and a very lengthy campaign that will keep you playing for at least 5+ hours.

In conclusion, this game is a great strategy simulation game, especially these days when decent WW2 tactics simulation games are hard to find. If you like games like TABS with a little more strategy thrown in, you’ll love this one!

This game is a great strategy simulation game, especially these days when decent WW2 tactics simulation games are hard to find. If you like games like TABS with a little more strategy thrown in, you’ll love this one!