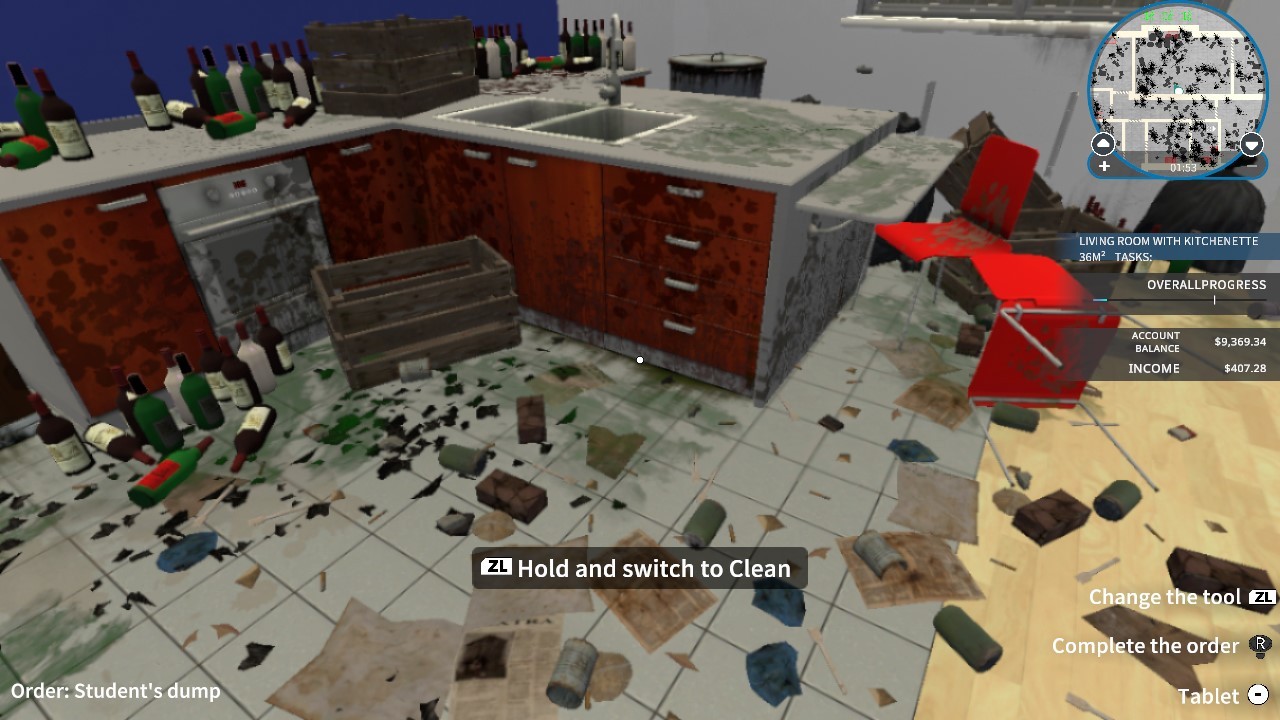 House Flipper was originally an indie game on PC, it fits within the ‘simulation’ category that has become abundant over recent years. I was particularly interested in this title but never got the chance to play it, but now with it coming to the switch, It’s a perfect time to check it out.

The issues with this game are apparent immediately, the loading screens are awfully long for a game of this size and it’s not loading anything particularly pixel heavy as this game’s art style is ironically closer to assets flipping than a unique design. Some of the assets are extremely pixelated even for an indie game the lack of polish on even something as simple as an electrical box is jarring. The beginnings as the faceless and nameless avatar get a new two-room unit covered in rubbish, grease and filth, this is the core of the game for a short time as you learn the basics in your office and then accept jobs to clean peoples garages and rented flats to learn the core mechanics of the game.

This progression system of ‘handy-man’ jobs teaches the player how to eventually fully renovate their own unit and further properties, some of the skills are unlocked are as expected in a game where you renovate homes like painting walls, installing sinks and toilets, tiling and building/demolishing walls. as you use these tools you unlock points for a progression tree which makes the actions more efficient for example, 20% faster, uses 15% less paint, able to build 3 walls at a time. The more you paint, build or tile the tasks becoming quicker and more cost-effective but does it fix how grueling it is to do? no, it doesn’t. 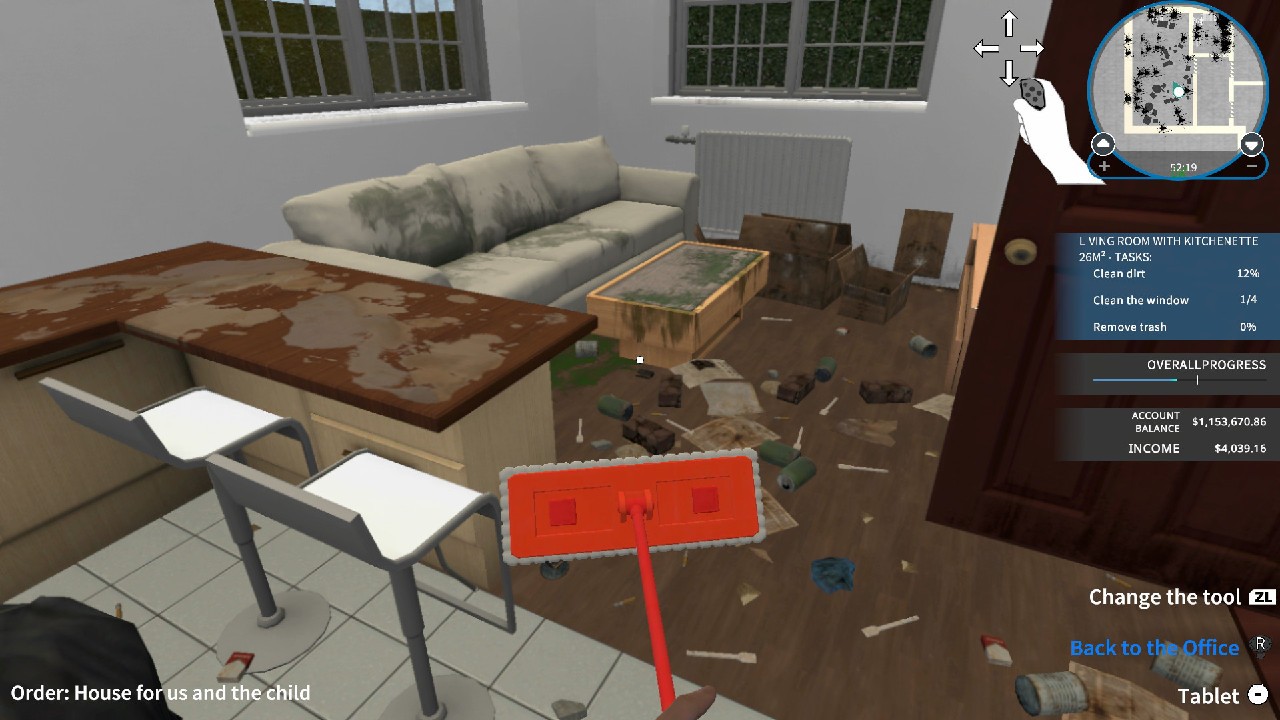 This is in large part to the controls, as mentioned this was a PC game and it feels like it. In the settings there is a toggle to add ‘HD Rumble’ and ‘Gyroscope’ and testing with a Pro controller, handled mode, and using joy-cons while docked I can confirm both of these settings either don’t work or just are false advertising. it’s similar to Minecraft where you move the cursor and an outline shows to interact with the area, the issue is that the area’s you want to interact with are often tiny and with such fidgety controllers clearly not designed or optimised for console use. It is extremely frustrating trying to play the game, like one mission where you clean a student flat you must pick up each individual bottle and the slightest touch of the controller puts you somewhere not where you want. There are controller settings in the menu but no matter what I did it never fixed the game’s clear design that was based around a mouse and keyboard.

Aesthetically the game is divided, the music is generic and I eventually just listened to a podcast instead of the music as it added to the appeal that this game has, it’s similar to  Animal Crossing’s appeal of interior design and visual progression but it lacks any of the charm or any of the cute animals.

The game’s core is when you eventually earn enough money to buy a second property and tear down the house/unit, repair the walls with plaster, paint the walls and redecorate is where the game really shines. Clients send messages of what they like and don’t like while you’re renovating the property, these clients vary from a couple with a newborn who needs a nursery and a bedroom, a family of 6 including their grandmother and a playboy who doesn’t want a kitchen but wants two bedrooms. You can lean into which client you think would pay the most or just create the best home you can out of the building you currently have to try to make the most profit you can. 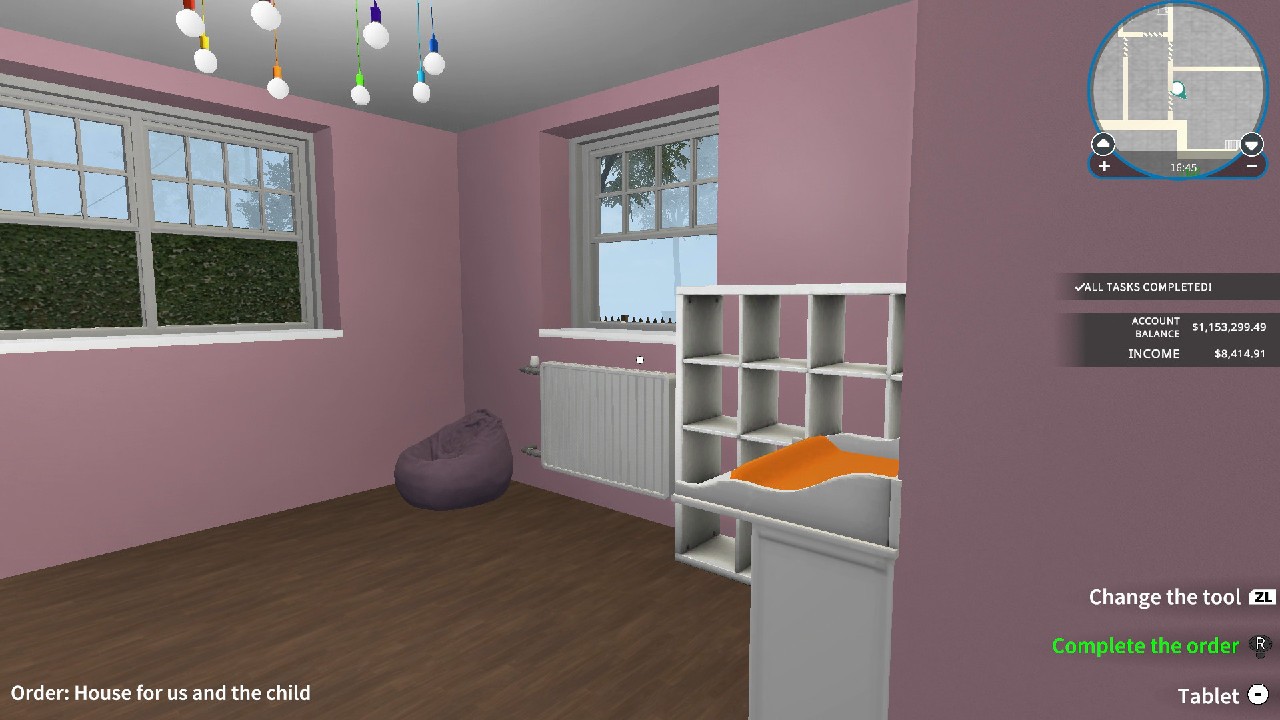 Little issues that arise while playing this game are that windows are hard to clean if the background has hedges as the window has no sunlight and it’s hard to see the dust on the window, another inconvenience for some may be that while installing let’s say a bathtub it requires quick time events to complete the task roughly 10-20 seemly random button presses. This game isn’t all terrible, there some great accessibility settings like is a great touch like you can change cockroaches to broken glass if you hate bugs or you can change the currency of the game, which I did. I’d much rather use my Australian Dollarydoos Doo’s then USD or a Sterling Pound.

The game does a great job of teaching you how to play and you never really feel lost. I don’t see any replay value in this game as you spend a lot of time preparing and working so it is a long burn and not a quick playthrough. Unless the DLC adds something extremely different like having exterior design I don’t see a reason to play it twice but, playing it once is still a rewarding progression that you can take your time with and do it while having a cup of tea listening to music or a podcast.

If you like video games in the simulation category, games with interior design or a game where the goal is to become rich I would recommend this game… on PC. Having it on switch is great for someone who doesn’t have another console but if you like the idea of this game, play it on PC as the controls are frustrating and it has new DLC on Steam if you really fall in love, unlike Switch at the time of writing this. Overall the game is solid, nothing special but worth your money if on sale but I would recommend a mouse and keyboard if possible.

House Flippers is a cathartic and relaxing experience, but it’s far from perfect as the controls, visuals and sound stop the game from being a must-have indie.