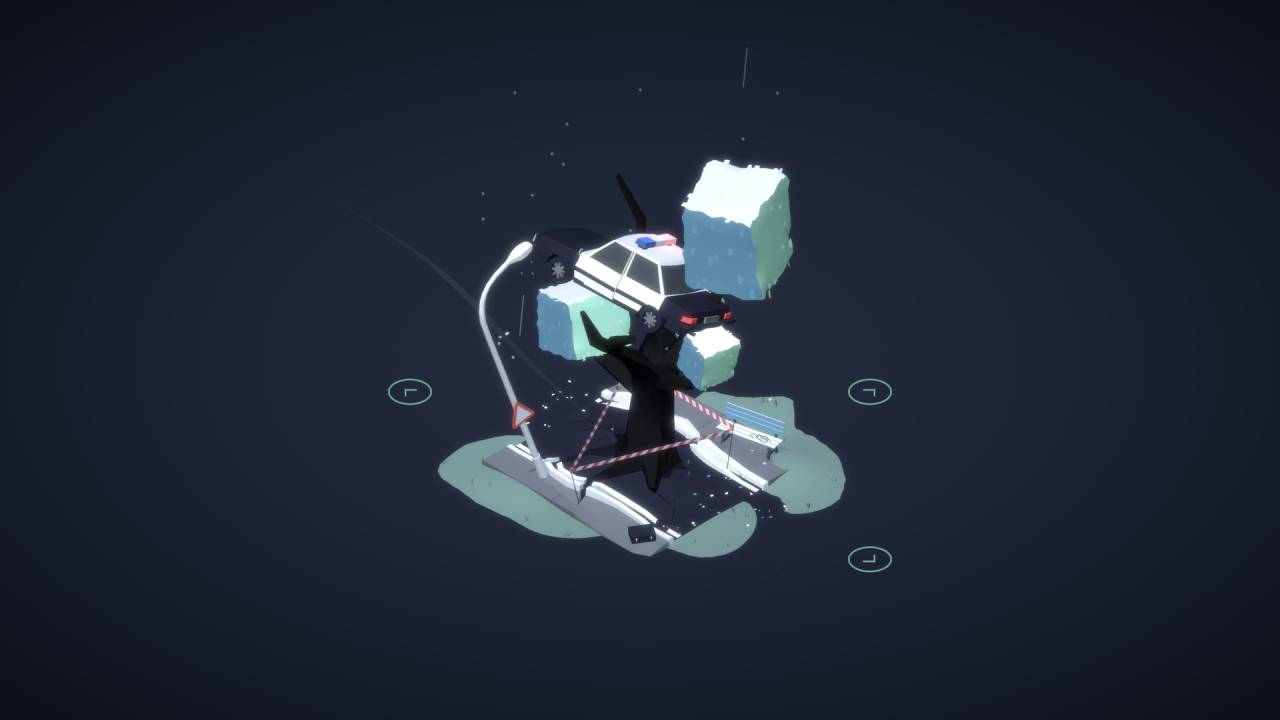 An isometric puzzler developed by Happy Volcano Games, The Almost Gone is described as an “emotional and immersive” experience. It’s a title abstract in nature — sometimes to a fault — but it’s also one that pushes the boundaries. It can, perhaps, be best described as Hellblade: Senua’s Sacrifice meets a puzzle game. There’s a lot to like here if you’re a fan of adventure/puzzle games, but its laser-sharp focus means that if you’re not a particular fan of this genre, then you likely won’t enjoy the experience. Let’s delve a little deeper.

The game is separated into five acts, with it taking a couple of hours, give or take, to finish them all. And upon starting a new game, a screen warns you that it deals with some very mature themes. When Act 1 commences, a line of text informs you that it’s “A moment after,” and you are given an isometric view of a bedroom. Gripping from the start, the story will immediately have you asking questions, like a moment after what?

You control/are accompanied by an unknown entity, who is just as confused as you at being dropped into this world. For exposition, they speak as you solve puzzles, interact with objects, and navigate the world, but their dialogue is delivered via text only. As you find out more about the plot, so does this entity remember and ruminate on the events of the past. The controls are simple: ZL/ZR rotate your view around the given room, while the left stick moves a cursor around. Pressing A while your cursor is over an object interacts with it, and pressing X opens your inventory; from there you can then view a close-up of your inventory items to further inspect and interact with them. The right stick moves you from room to room or scene to scene. 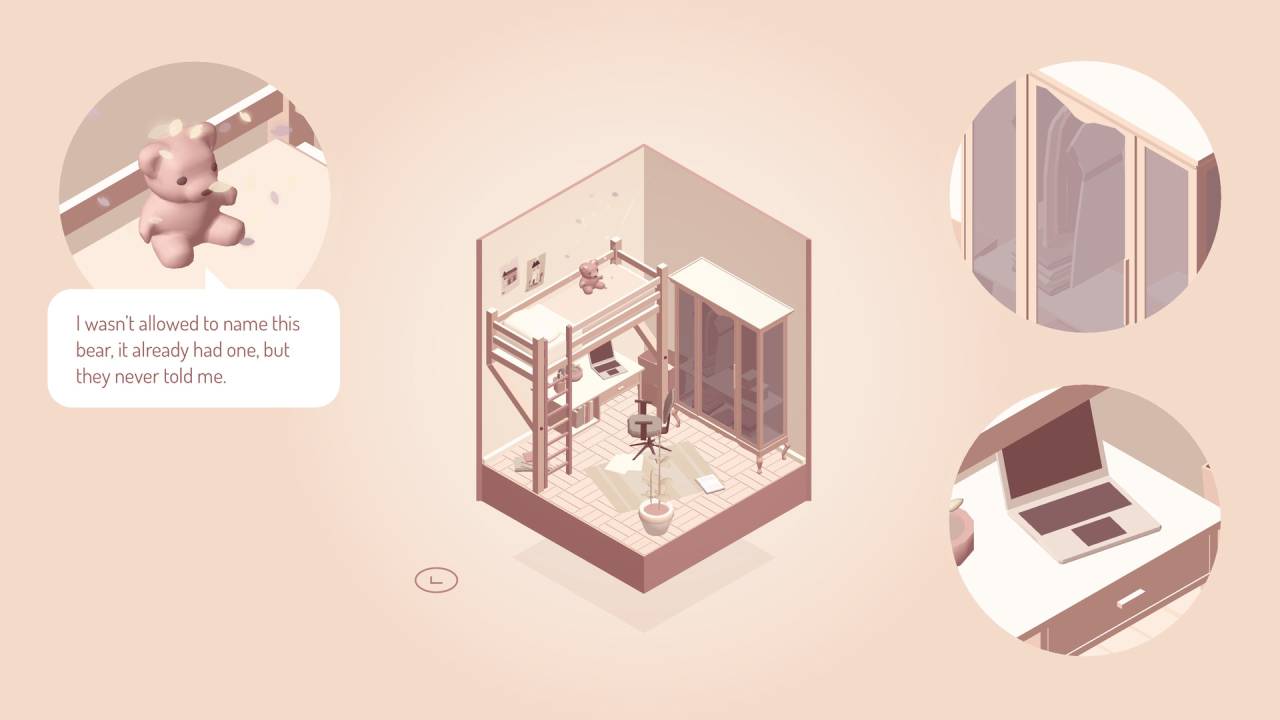 To leave the first scene in the bedroom, you have to solve a small puzzle. Then you go on to explore the rest of the house, with more doors opening as you solve more puzzles related to memories of the narrating entity. For example, finding the correct patterns hinted at in the environment, then clicking them on an object, which then opens and gives you a key to the next area. The puzzles are almost exclusively environmental: turning valves, finding and objects, looking for hints in your surroundings. The gameplay loop involves solving these puzzles to unlock the next area, whether that be a room or larger area, which then takes you to new literal and figurative places.

Although limited, The Almost Gone does its puzzles very well, with hardly a frustration in sight. They’re satisfying, and they build on what you’ve learnt before — does a button tilt an object? It’s likely that in the next set of puzzles it will as well. With so much of the game’s theme related to memory, you can also move backwards and forward through time, taking objects with you to solve puzzles. It’s a unique mechanic that allows you to explore how the environments have changed over time, giving a sense of lived-in world, while also being useful to the gameplay.

Each act brings a new locale, which brings new environments and increasingly difficult puzzle gameplay. Houses, streets, woods, and institutions are all environments for the gameplay. But these environments aren’t right. There are no other characters, and there are out of place objects related to other memories in locations where they shouldn’t be. It’s unsettlingly Lynchian, and you’re never quite sure what’s happening. Smash a TV, for example, and there’s a cake behind it. Something is very wrong in this world, and this notion is only amplified by the games fantastic sound design.

When you first launch The Almost Gone, you are greeted with a screen that tells you that the game is best played with headphones — and it really is. Sound is an absolutely crucial part of the experience, hence the earlier comparison to Hellblade. Ominous and oppressive, the ambient noises and soundtrack will put you on edge as you try to solve puzzles to progress. In some scenes, for example, the low bass rumble doesn’t let up, filling you with anxiety and dread. The sound design also evokes the environments as you navigate. That low bass rumble? A particular favourite indoors, hammering home the environment’s claustrophobic nature. 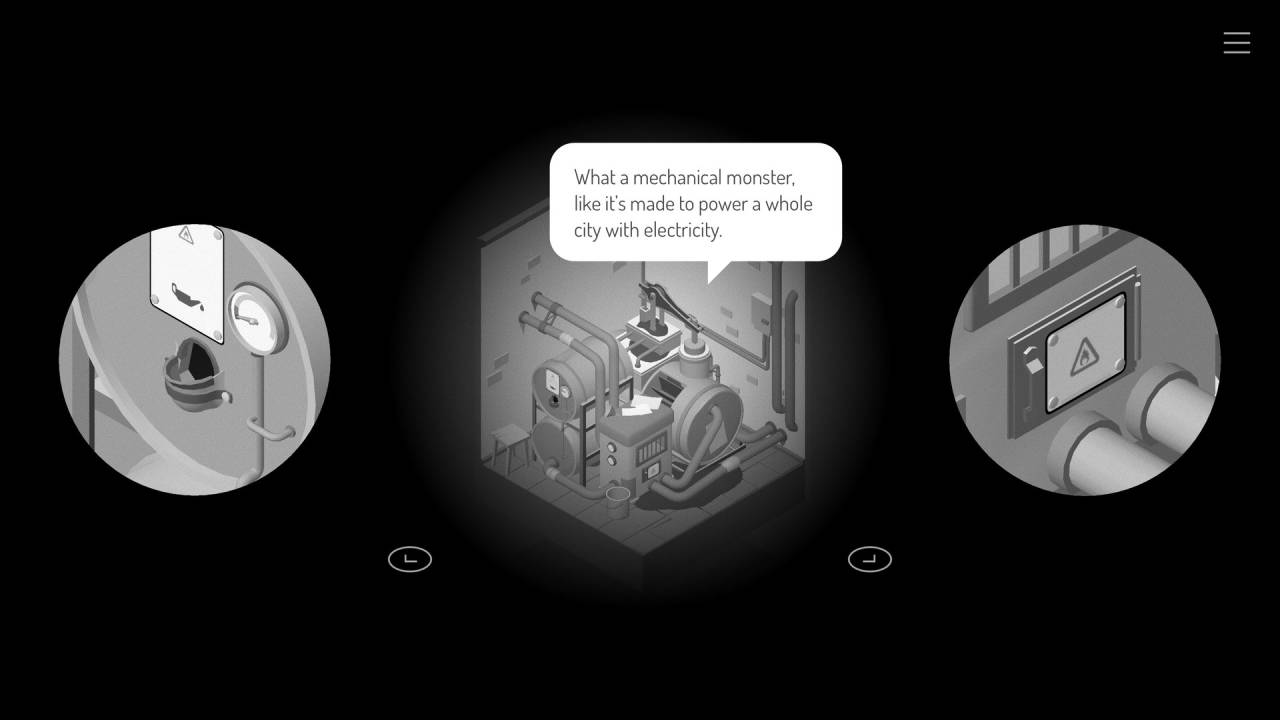 The art style used helps evoke the game’s desolate themes, with some buildings having an air of Brutalist style. As you progress further and further, the world becomes more colourful. Yet, the colour palette is muted at best, and objects and places from previous areas are reused, but with different styling and placement. The environments and objects are detailed enough, but not overly so. Though this is by design, as the art style interweaves with the themes and plot. There is a real sense that every detail in The Almost Gone means something, but what? And that is where we hit the road bumps.

It’s got all the plot of an Andrei Tarkovsky movie —  there’s something there, but you’re just never sure what. And like a Tarkovsky movie, it’s never explained or elaborated on. Unlike the Russian master of cinema, however, The Almost Gone goes too far in its abstractness. We get glimpses into people’s lives, and it’s very surreal and oppressive and horrible, but there is no gut-punch realisation at the end; at least, there wasn’t for me. It’s an easy recommendation for fans of puzzles looking for something dark, but if you’re not in the puzzling mood, there won’t be anything for you here. It’s a title confident in what it does and is, but the audience for this will be niche — and that’s fine.

The Almost Gone pushes the experiential boundaries of what it means to be a video game, and aims higher than most AAA titles.  It’s well-crafted, well-designed, and its world and atmosphere compelled me onwards more and more. Like an onion peeled back layer by layer, each new layer is both different and the same from the last — truth, history, life, death, all mesh together. The problem is that there is no ultimate payoff; no clear-cut answers to the questions that the game builds so wonderfully —  but like Tarkovsky’s works, maybe that’s the point?

Full disclosure: we encountered one puzzle bug that halted our progress until we forced the puzzle to reset through convoluted methods, but we have been assured by the developers that this is being patched, and should not be a problem for most players.

Fans of puzzles and avant-garde experiences will enjoy this well-crafted but short experience, as long as they are willing to overlook the game’s narrow scope and abstract story.