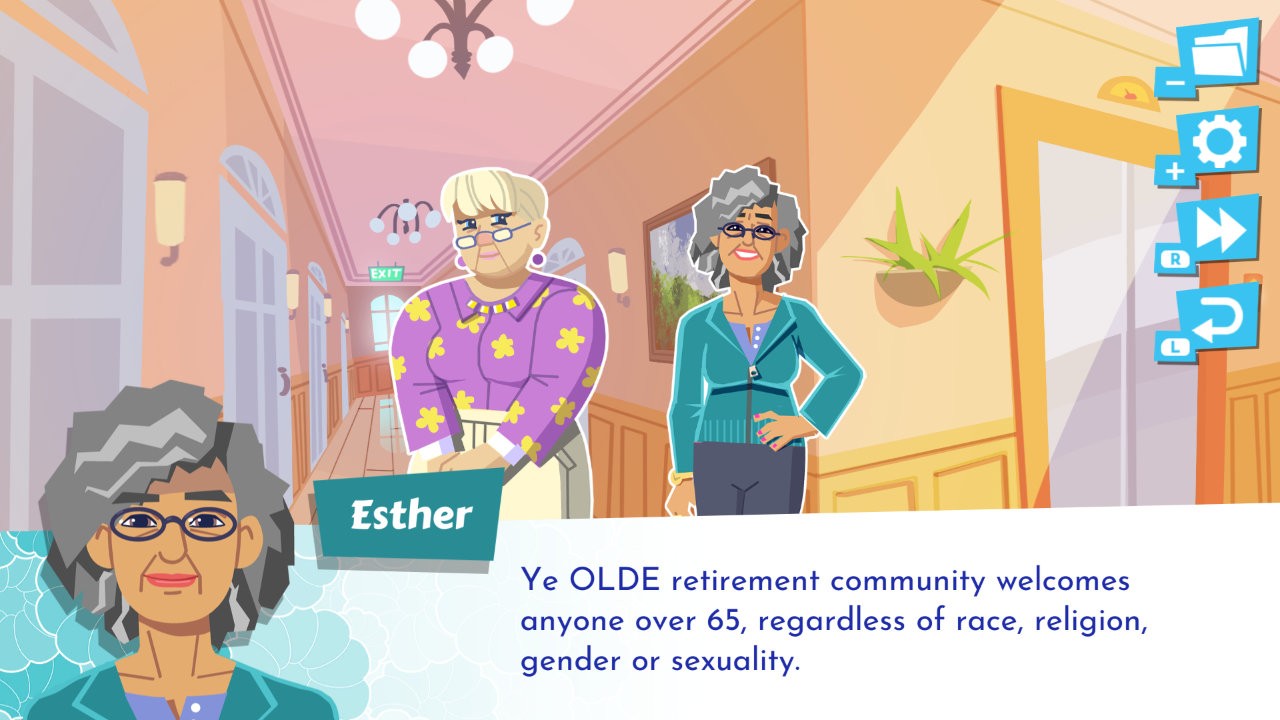 Later Daters is a visual novel dating sim by Bloom Digital Media that’s set in a charming retirement community. Instead of dying alone, you play as an octogenarian and are looking for love, learning, and adventure.

You begin your journey with the option to customize your character. As for customization, the only ones that exist are the ability to choose from 3 preset faces\sexes, a cat, dog, or robot, your name, honorifics, and how you lived your life. You can’t choose the appearance or your character or your animal. I played through twice and the variations in the text were minimal except very specific instances for the animal you chose.

Later Daters is very inclusive, and that’s a breath of fresh air. There is an old person out there for whatever it is you’re into at Ye OLDE. As you go through the story, you’re introduced to folks who are all looking for a piece of the action in their golden years. You can join in on the fun or not. It’s up to you because sometimes all you need is a friend. However, I came to find that some of the choices you selected felt open-ended or didn’t feel like it had any impact because conversations starting after I made a choice, for example, was about something different entirely or what I said was not registered. Maybe the choice is brought up again in Part 2? Who is to say. There were also some English grammar inconsistencies that I came across. 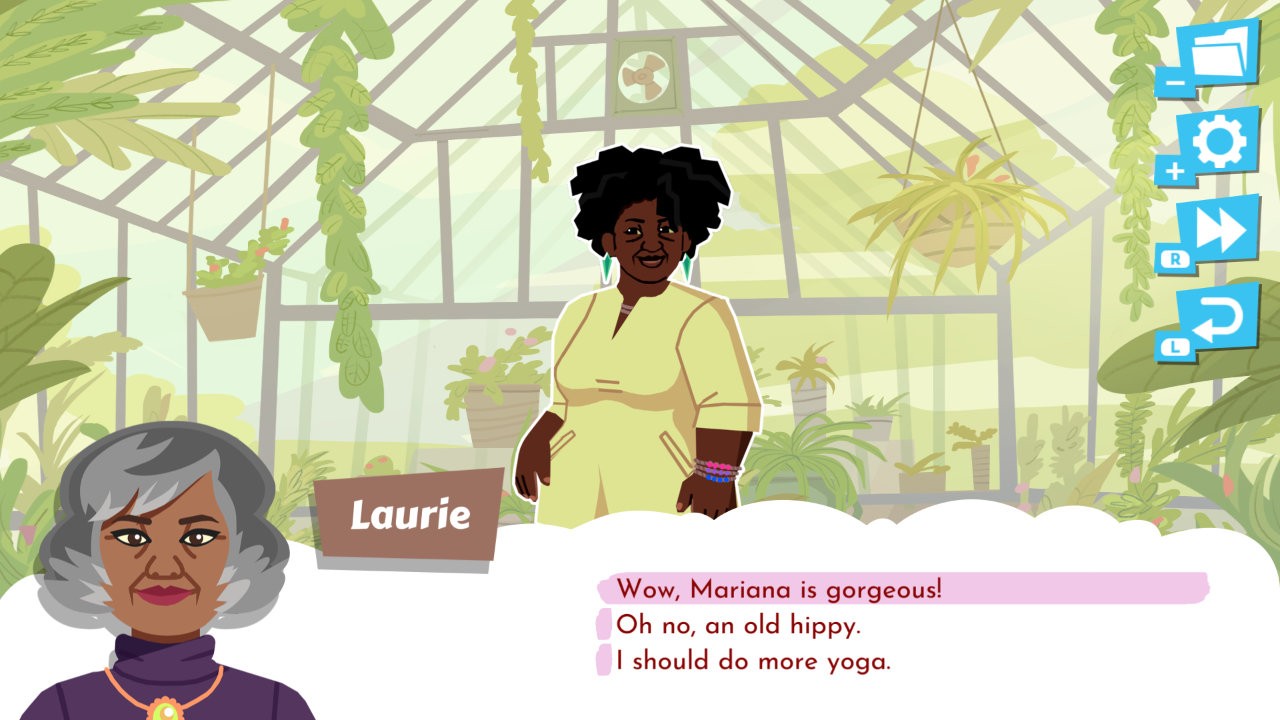 The eight residents you can choose from are quirky, fun, and also quite nosy. I’m looking at you Esther Katz. They are Salema and Horoun Wassem, Esther Katz, Nelson park, Jax Argo, Mariana Lopez, Crystal Meyer, Albert Lewis, and Blair King. Everyone definitely has a story to tell and history to dig through. I did find it startling how quickly the folks were to disclose intimate details to a stranger. When I thought the game was progressing quickly, I came to find it was only the first day. So, you can learn a lot about these residents right off the bat.

Some stories definitely tugged at the ol’ heartstrings since they contained topics I know people struggle with such as mortality, acceptance, and vulnerability. I applaud the devs for creating a diverse cast with very real, very thought-provoking concerns. You’ll have choices of LGBTQ inclusive romances and poly relationship options.

I love the look of Later Daters. The art style is great and the colors are vibrant. The intro song is super catchy. However, other than the intro, some intermissions, or random events, music is all but non-existent. This is especially hard to ignore when during conversations, everything is silent. There are no sound options except to mute the music. Which doesn’t make sense since the majority of my playthrough was pretty silent. This is disappointing because the intro song and another song by character Jax Argo were so catchy. Even the soft piano number you hear when you navigate menus would’ve been nice to hear as you play. 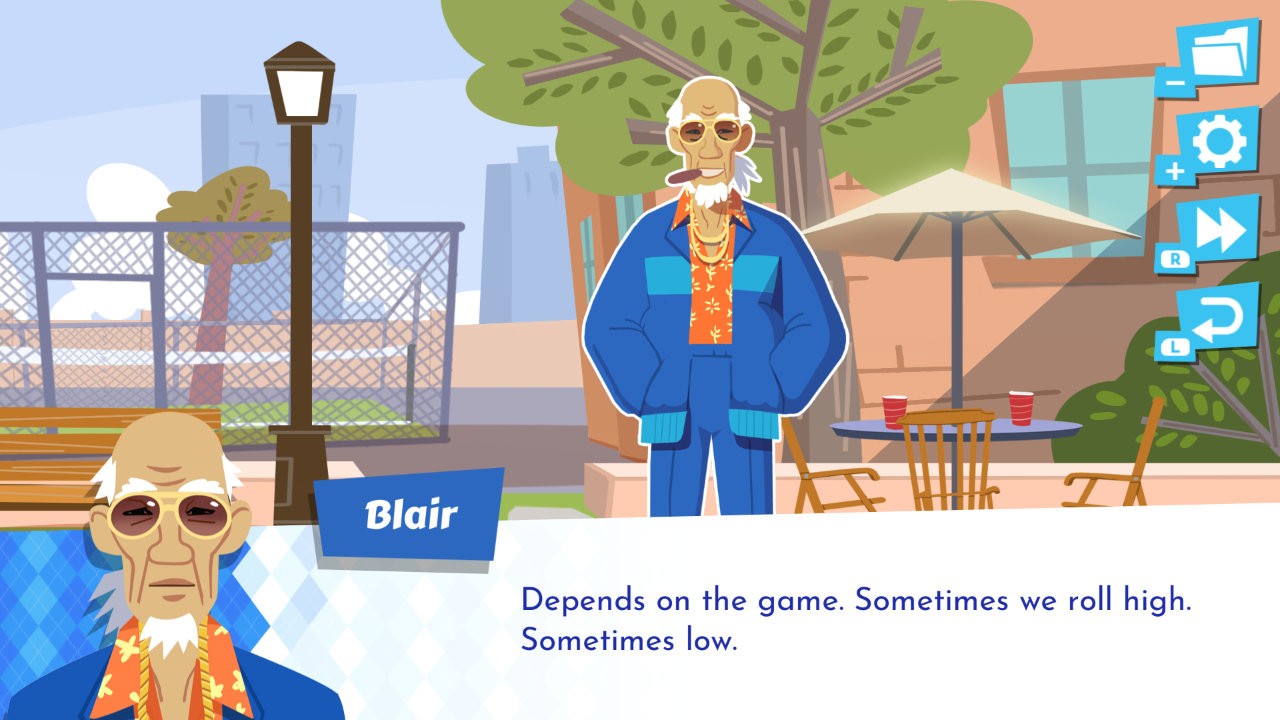 The game’s time frame is for 1 week at Ye OLDE and my gameplay ended on Wednesday. What you say on these days will dictate what happens at the end of each. You’ll see a calendar info-graphic that shows you what you did to keep track of your activities at the end of each day. The clock I kept seeing as a load screen is perpetually stuck at 2:49. Not sure if this is to represent time passing, but because it shows the same time every instance you see it, it’s tough to figure out what time of day it really is.

Later Daters is $7.99 on the Nintendo Store, but the price is for part 1. This is the only part currently available on Switch. It’s three episodes long. Each episode guarantees at least 1 hour of play per episode, but that’s dependent on reading speed. Part 2 is expected to be released sometime later this year, although an official release date has yet to be announced as of this review.

If you enjoy off the wall visual novel dating sims, you’ll find what you’re looking for in Later Daters.