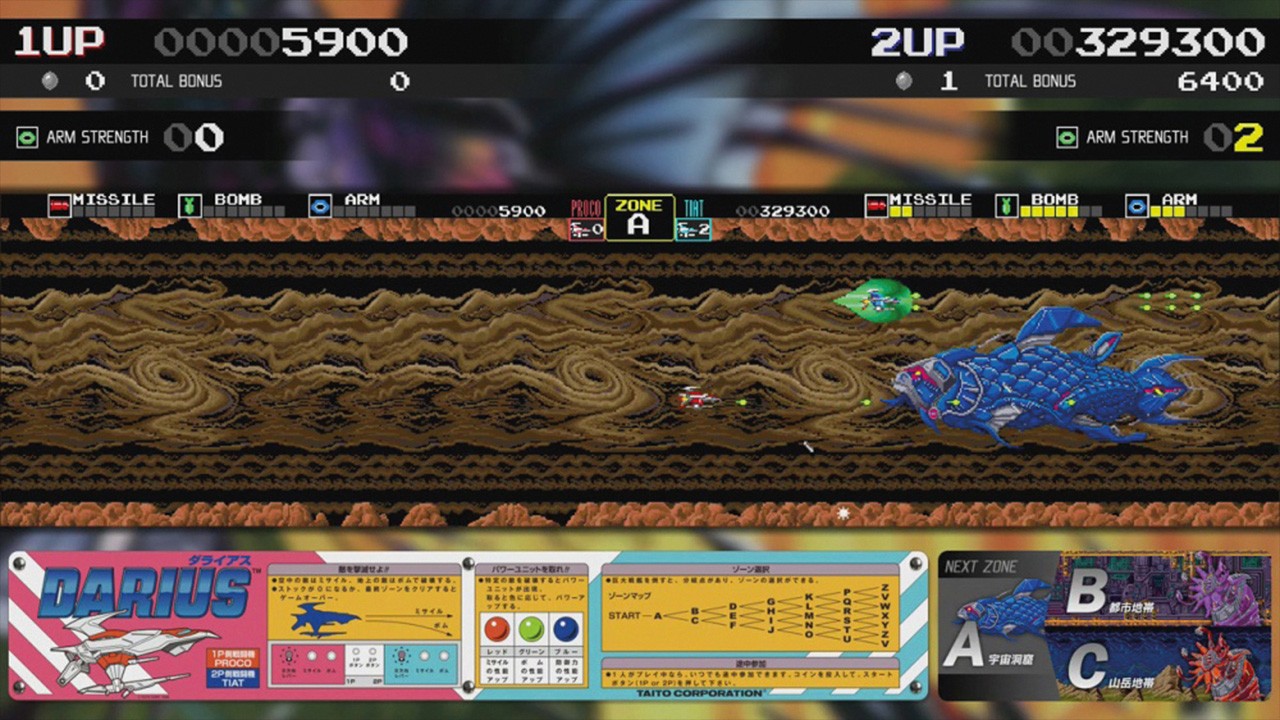 The console collection of the Darius games that we took a look at just a few days ago really made me remember what makes a shmup a pretty spectacular experience. In the realm of these kinds of arcade shooters, the Darius series made their mark by insisting that most of the game cabinets be atypical of what you normally saw. Asking for two or, later, even three screens worth of size meant that other game cabinets couldn’t be installed in favor of this one title, but that actually paid off well. The sheer enormity of these games would draw players, and it’s a damn shame that so many US locales preferred to keep things smaller in order to maximize variety and replay (probably why pinball maintained such a strong presence even well into the 90s). Now, players have an opportunity to see, at least in some perspective, what the original Darius trilogy was like up on the big screen, although handheld players might be ready to deal with a specific level of frustration. This is the Darius Cozmic Collection Arcade.

From the start, the Cozmic Collection Arcade is a bit weaker compared to the Collection Console simply because there are fewer games. You get Darius I, II and Gaiden, with three versions of the first two games and just the singular release of Gaiden. Additionally, the international versions of Darius II (which were called Sagaia, in vein with the console releases) are identical: the notetaker who created the descriptions even say as such, noting that the second version of Sagaia “was hardly available on the mass market, and may not have even been available at all.” What a cryptic and bizarre comment to make about your own product being released into the world! While playing through the different editions of these games might give you some perspective on the localization efforts made to not only translate the text but to also flatten out the difficulty curve, there are, ultimately, only three games. Unlike the Cozmic Collection Console, the variety isn’t really felt here given that the system (the arcade cabinet) never changes.

Now, in terms of actual games, this is where things get interesting. Darius I, which has the most variety within its releases, truly showcases as a revolutionary approach to shmup games and is best appreciated in the classic arcade format. The screen, you’ll notice, is monstrous in length. Not only does it give players a sense of the enormity of the world but it helps to immerse you into this idea of the range and extension of the gameplay. An arcade game in which branching paths are a choice to explore for furthering the levels was unique at the time and still resonates as a spectacular spectacle to this day. You aren’t just playing this magnificent shooter that’s done up in a vibrant color palette with a complex soundscape: you have replay value built-in that stems from an inherently enormous game. Players who tossed in their 100 yen coins had to briefly but strongly agonize over which way to go, and then to think about where the path could have led them later. You’re already queueing up your next coin for play regardless if you survive the onslaught of enemy waves and fabulously massive enemies, making this titan of arcade cabinets extremely profitable.

Also, the first Darius game is fascinating to see how the three incarnations come across as they make their way out to the world and are greeted by audience reaction. The first version is seriously tough as nails, asking players to have unshakable nerves and face enemy waves without blinking, weaving in and out of surprisingly high constitution mobs to nail the differently colored enemy that would drop the power-up. If you weren’t able to get the power-up in time for the boss, the likelihood of survival was fairly low, as it was already challenging to face down the huge, marine life-themed guardians with all your guns and missiles tamped up. When the new version arrived, the tone of difficulty was changed, giving enemies smaller HP brackets, power-ups to be more easily gotten, and bosses to have fewer hits needed to be conquered. This should have fixed the problem, but enough players spoke out that Taito released the third and final version of this same game, giving the perception of ease but actually having the bosses scale upwards as the power-ups were collected. This made the game possible to be completed by anyone but made the in-between of navigating opposing waves more difficult at the expense of the bosses being easier. It was a brilliant strategy, and Darius is still remembered fondly to this very day. 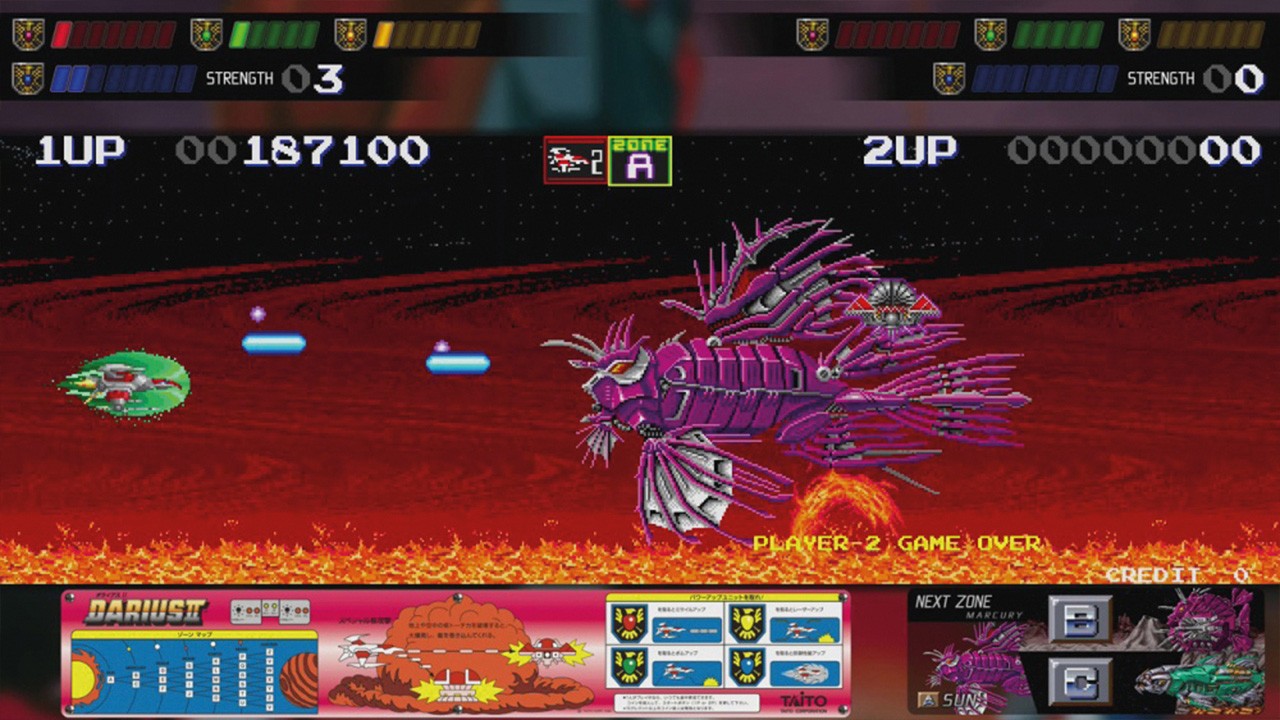 However, and I will leave this as a note for both Darius I and II, these games are seriously a pain to play in handheld mode on the Switch. By trying to properly emulate the three or two screened approaches of the Darius titles, the handheld variety of gameplay leaves players in the lurch as to the best way to approach the play. If you go with pixel perfect, your entire playfield is a thin strip that runs the length of the screen, two buffer banners on the top and bottom taking up more room than the game itself. If you decide to do a bit of more boxed outplay, the game does look bigger but you immediately start to lose real estate, setting you up for failure and forcing the game to look ugly. God forbid you should do the fully stretched mode to take up the full screen: it’s an abomination. The ships are so bent out of shape and the whole thing is simultaneously squashed and stretched like you ran the game through the dryer after a hot water wash. If you have one of those gorgeous ultra-wide televisions, then dock this sucker and only play that way for the best possible experience. The graphics from the mid to late 80s in arcades were unparalleled, and really do look good in their original glory. But the Switch and Switch Lite screens are simply tiny for handheld play. Dock it up, make it work.

Darius II is a huge improvement on the game in every aspect, at least in my opinion. Allowing players to knock it down to two screens instead of three (check the Sagaia port for this comparison) means that you have better aspect viewing and control while still maintaining the larger-than-life theory. The different ships to choose between are inherently the same, but they have a better feel of being different and thus giving consequence not only in who you pick but in having a second player assist you in this Herculean task. The ships are crisper, the backgrounds more detailed, the bosses somehow larger and more imposing without seeming comical, and a genuinely great branching system, a bit of which we’ve already seen, continues to shine brightly and inspire more replay action. The enemies are balanced from the start, leading to fewer discrepancies between the local and international versions, giving a more unified idea about what players around the world were experiencing. Had Taito pushed for the original Darius to be localized, I don’t know if the console collection would even exist, but thank goodness Sagaia is such a banger title.

As I said up top and I’ll say it again, the second edition of Sagaia doesn’t seem to have a single difference of note from the first edition. I put in the time and tried to play the same sections back to back, and really couldn’t notice anything that separated them. After a time, I started to believe I was telling myself something was different, but couldn’t tell from screenshots that I took to do a side-by-side. In the end, I think it might be something where the code is cleaner, or maybe there’s a magnificent secret in one of the unexplored paths, or maybe it was just a clever way to pad out the collection a bit more. In either case, feel free to dive into it, but don’t expect to see anything jump out at you immediately…if ever.

Finally, there’s Darius Gaiden. The first and only Darius game to be built for a single screen approach, this shmup of a totally different walk of life doesn’t even feel like a Darius game, and I don’t think I’m saying that in a negative way. Sure, the branching pathways are there, and you can only see seven of the twenty-eight different potential worlds in a single play, but other things feel quite different. The worlds themselves feel more urban and “post-apocalyptic” than traditionally science fiction and otherworldly. The Silver Hawk ship that you pilot is more angular, built for death than for exploration and helmsmanship. The weapons still upgrade, but there’s a sharp shift between weapons that are baseline and the jump, usually, two power-ups in, that suddenly make an impact. There’s also the matter of the Black Hole weapon, which acts as a massive space magnet to attract all enemies into a singular grouping and make them for easy pickings. This is more effective in later stages when your weapons are all more powerful, but the Black Hole certainly has it’s non-boss related options even in the very beginning. 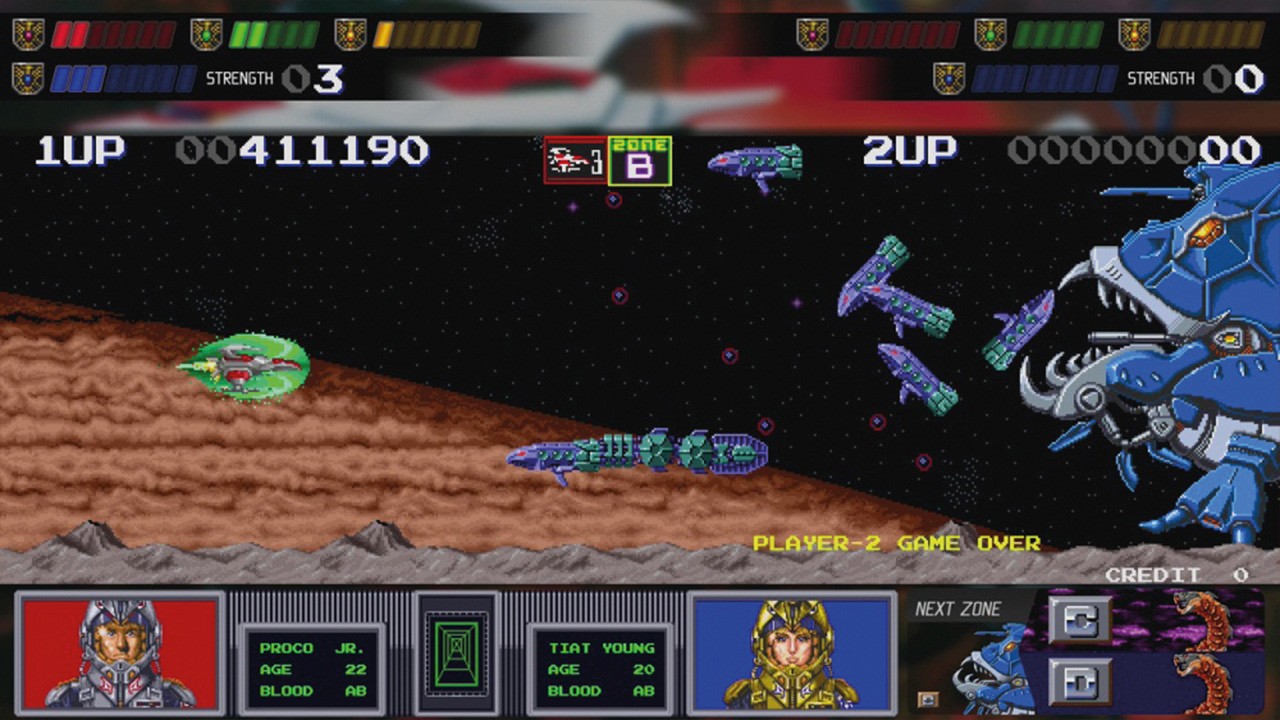 Darius Gaiden is a fantastic, experimental trip into the world of Darius, though I’m left with a bit of remorse over the whole ordeal. That is to say, it just feels like it deviates too much from nature and atmospheric elements that make Darius what it was. Instead of feeling properly science fiction with a Japanese flair, it’s got a grim tone that has a Western influence on it. It’s more Knight Rider than Kamen Rider, more Robocop than Ultraman. Had Taito taken more cues from their console ports and applied those to the next arcade version – simplification and unification of the already successful traits – then I believe the arcade installments could have survived into another iteration. Instead, Gaiden serves as the final voyage that the Darius model saw for many in the arcades, and it’s a sweet but sour note on where to end the concert. Since it’s here and it’s in the collection, it should absolutely be played, but it needs to be tempered expectantly.

Like the Collection Console, Darius Cozmic Collection Arcade will not apply to everyone and anyone with a Switch, and it especially should not apply for the handheld crowd who doesn’t have Air Force eyesight. It’s a very unique collection, and it has the appeal of certain games that I don’t even know if they’ve been available in ROM format, much less played anywhere in arcades. If you’ve got the taste for fantastic shmups and also managed to snag the physical copy, this game should be added to your collection, proudly, of some of the treasures of yesterday. But, if you’ve never really been a Darius fan or don’t have an interest in different arcade versions, then you might choose the branching path that leads you far, far away from this purchase.

While not as bombastic as the console collection, this archive of all things Darius and arcade is a gleaming gem in the right collector’s library.