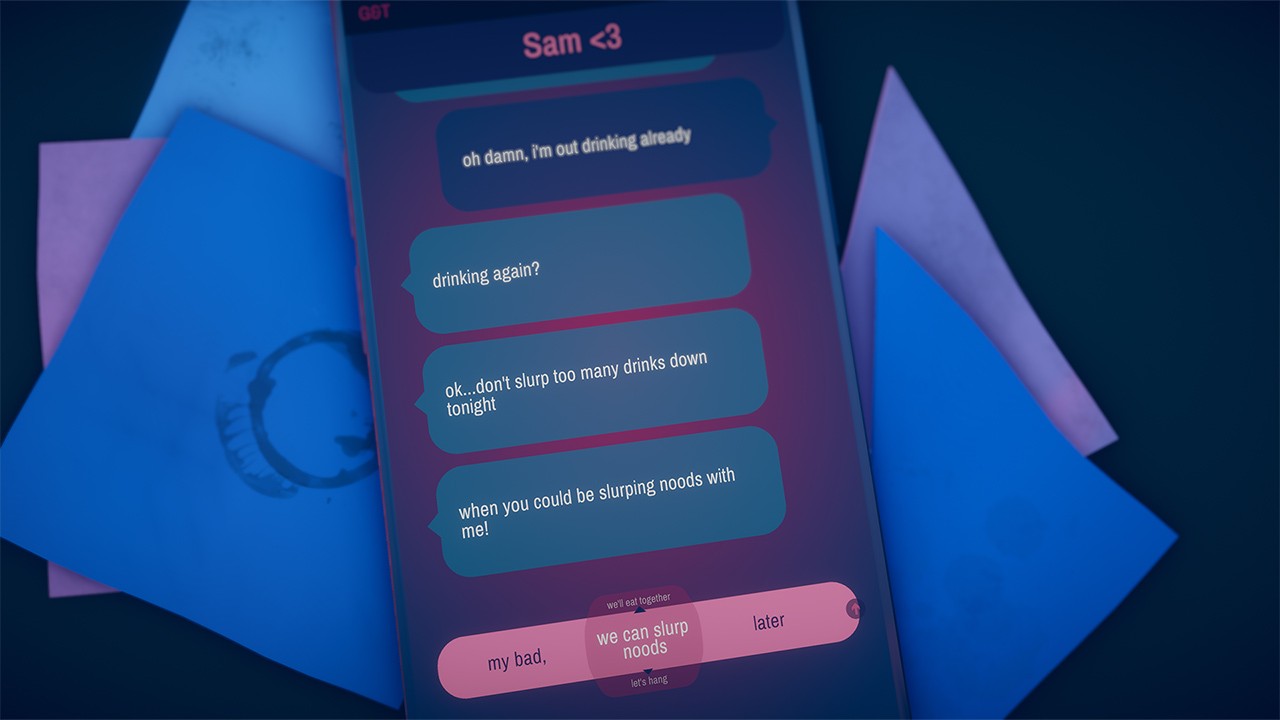 Almost more like a social experiment than a game, We Should Talk is a study into behaviour – notably relationships and how we respond with one another. The only thing is, this isn’t an in-depth study that will keep you up at night. I was pretty disappointed with the speed of my first playthrough.

A bit like the game One Night Stand, you’re in one location – a bar. You are presented with multiple choice answers for when you converse with your girlfriend via text messaging on your smartphone, through to interacting with an ex and potential love interest you meet at the bar. For my first playthrough, I didn’t abuse the freedom to respond to multiple dialogue choices, and instead acted on it as I would in real life.

As the conversation began, it was apparent that I had a girlfriend waiting for me back home, yet I was at a bar – initially flirting with the bartender. When the bartender started asking about my partner and how was work, the guilt kicked in, and I realised that I needed to tone it down a bit and get on with the game. However, that’s the premise of the game: your relationship and whether you will keep it going or go separate ways. 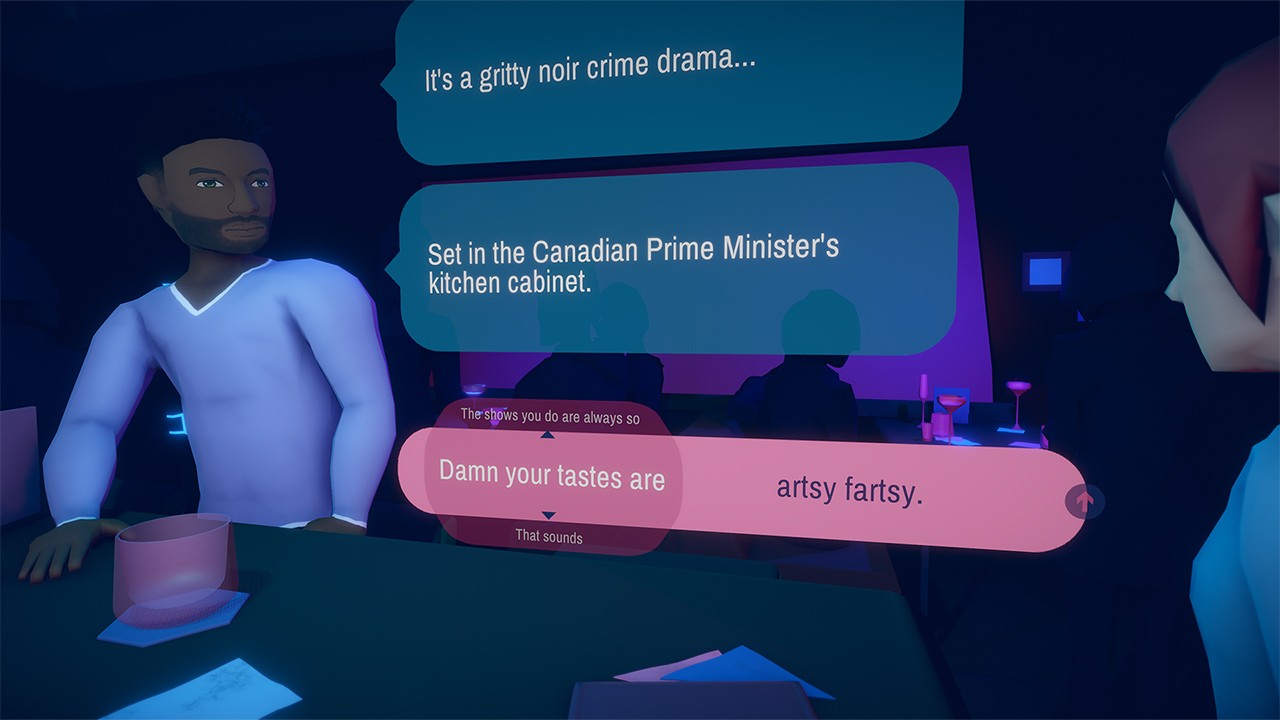 There’s no real exposition as you’re thrown into the story immediately. That’s a good thing really as it doesn’t dumb things down, and through each playthrough, you understand that character a little better, knowing them by name. However, it is a bit like Groundhog Day as you have to keep repeating similar lines of dialogue, and regardless of your response, the result is mostly the same. To unlock all the endings, you need to be precise with each answer, with little leeway to get it wrong. Though it’s a quick playthrough, after a few conclusions, it started to feel a bit worn, and I was losing interest in repeat plays, and the characters.

However, the psychology of it is fascinating. When I played for the first time, I was listening to my partner, responding aptly and shrugging off any unwanted attention in the bar. Easy. On the next playthrough, I went the complete opposite route and attempted to be mean – like they say ‘treat them mean…’. Surprisingly, I found it a little challenging to go out of my way to tell the opposite each time. Still, despite the initial shock from the partner, Samantha, the conversation followed the same path. And you encounter the same people at the bar, but answer with a different response.

The control system was unique for selecting dialogue. Each sentence is broken down into about three parts, and you scroll left and right to choose, pushing up and down to change the word or tone. Sometimes the sentences are too fragmented to work, but mostly, the writing is natural, but evidently, there isn’t always the response you want to say. I didn’t time my first playthrough, but it felt like 15 minutes. It didn’t drag, nor did it feel rushed, but after completing, you’re ‘rewarded’ with the future, and I guess there are only so many paths you can. But mine wasn’t 100% accurate. I’d dismissed the stranger at the bar, yet one ending insinuated that I had engaged with them. It’s a little fragmented in places. 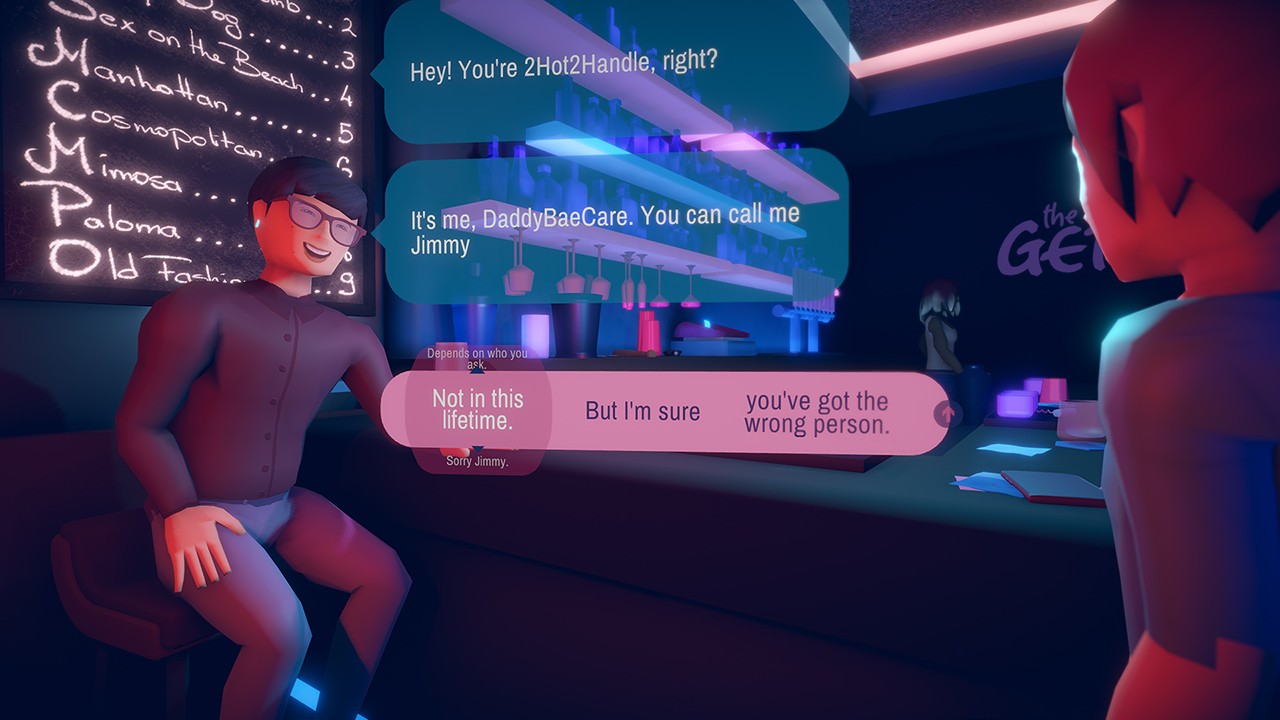 In terms of presentation, We Should Talk doesn’t break any new ground as the graphics aren’t anything special, but the mood and lighting are spot-on. They have a certain charm to them and fit the atmosphere pretty well. The highlight, however, was the original soundtrack. As the setting is solely within a bar, the music is constant, but never anything that distracts from the story with irritating beats or overly loud. It captured the ‘bar life’ pretty well. Not all, but there was a certain sleaziness to it, without being sleazy. Though that doesn’t make much sense.

It’s quite challenging to remark on much else as We Should Talk is ridiculously brief, and that was my biggest disappointment with it. It’s not so bad having some dialogue paths resembling the others, but each way didn’t stand out enough and despite the duration, unsure if most people would complete all the endings. The endings differ from one another, but to get to each one, as mentioned earlier, you have to follow a specific path; answering with the correct response to the right character and this, I found, was a bit of a chore, and sadly, a bore.

If there was the option to go extreme with some answers, and the narrative was a bit more dynamic. There would have been a bit more appeal, but when you’re stuck in the one environment either talking to your ex or a stranger who you’ve spoken to six times before, it gets a bit repetitive. In summary, an interesting concept that generally has you question your motivations, but with the lack of control of a conversation and limited time you get to play the game, We Should Talk is quite short-lived.

We Should Talk Review

While the idea is there and a fresh UI to make your dialogue selections, the game is just a little too short, and the direction of the conversation a little limited and thus restrictive. It shows a lot of potential, so if this concept can be expanded upon in a future title/follow-up, it could be a bigger hit.