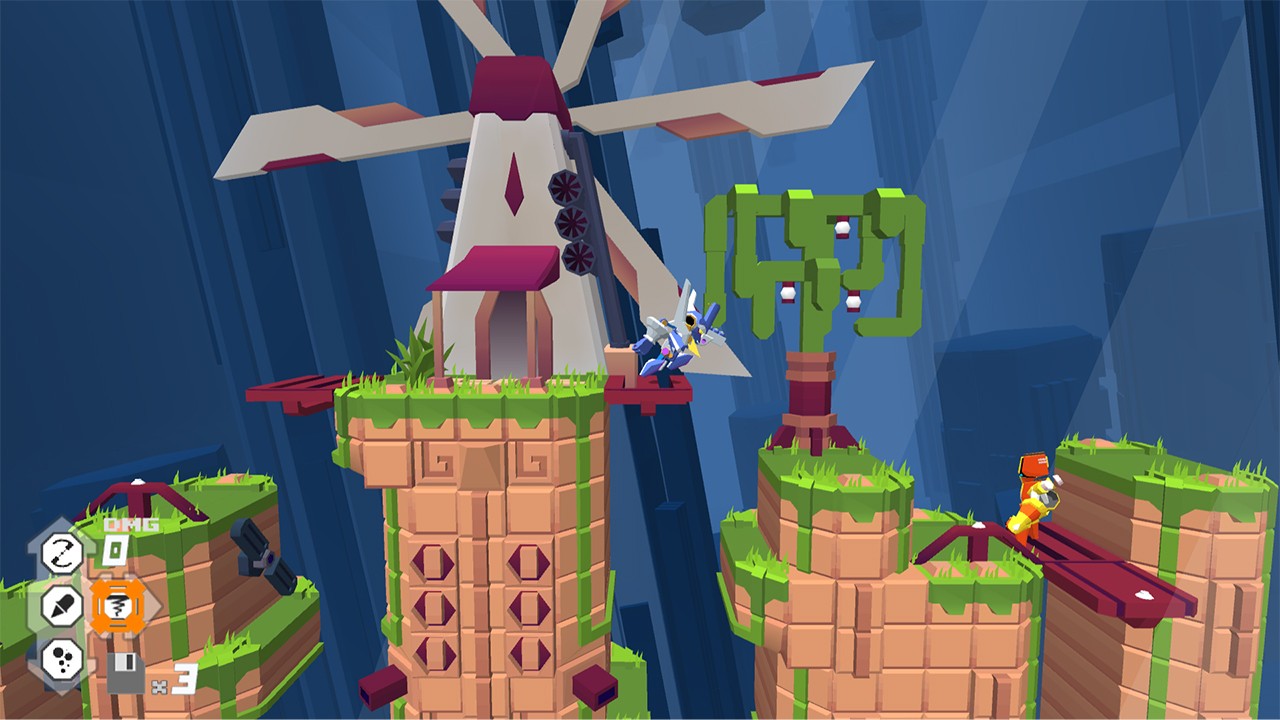 Megabyte Punch is an action platformer with in-depth fighting mechanics, the core of the gameplay is like Mega-Man but if you also fought your enemies using Super Smash Brothers controls. So does this unique combination of platforming, exploring and fighting work? Let’s find out.

The story is subpar, the Heartcore which is a big cube awakens you to protect the village that houses the Heartcore. The story is told through text and ultimately doesn’t matter in the grand scheme of things; you play the game to destroy robots. It left me not engaged with the game, and Megabyte Punch doesn’t immerse you within the world even slightly.

What is important is the gameplay, the gameplay as mentioned revolves around beating up smaller robots and then robots which are the same size as you and generally any fight with only one enemy is extremely easy. The fighting comprises 4 different ‘parts’ which all can be assigned to the D-Pad. This can include a big drill to break the environment, a mega-man like pulse rifle, a submachine gun and a comically big boxing glove. There’s a lot of creativity within the styles and parts you can make with possibly swapping out a gun or a jet pack for more movement, you can pick your play style and that is great for replayability and creativity. 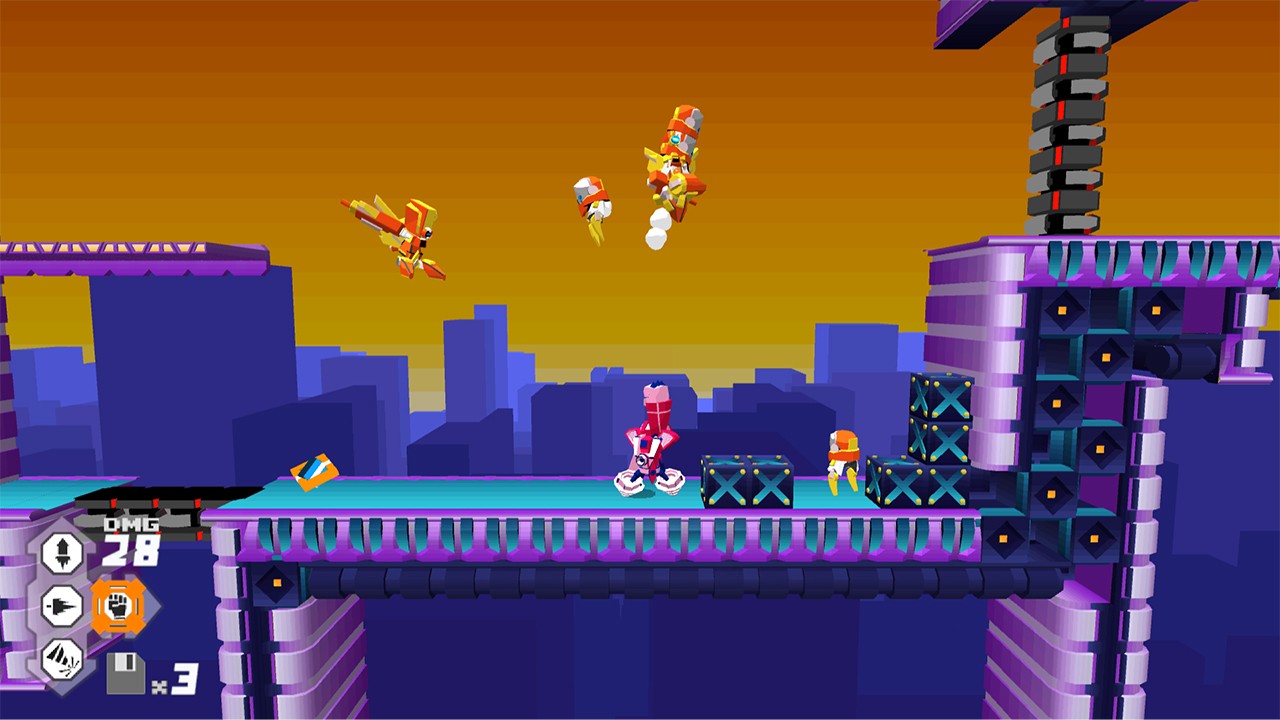 The other part of the gameplay is the platforming and exploration. As mentioned, you can get jetpacks or other things to help you traverse the environment or to pull off some ridiculous combos or strategies. The actual platforming is generic and with using a double jump in later stages the game eventually becomes more tricky with its platforming, which can be altered by your parts.

The game has 6 levels, and each level has 3 stages, the goal is to get to the end of the level and go into a Smash Brothers-like fight against a boss with a unique ability that has been teased within the stages. As it is only one enemy, it is pretty easy to cheese, and I found the actual stages more difficult, but they provided a challenge, nonetheless.

The graphical style is hit and miss, the character design and all the weapons and accessories look amazing, it really feels like a Transformers video game or a collectible set of toys from the early 2000s. 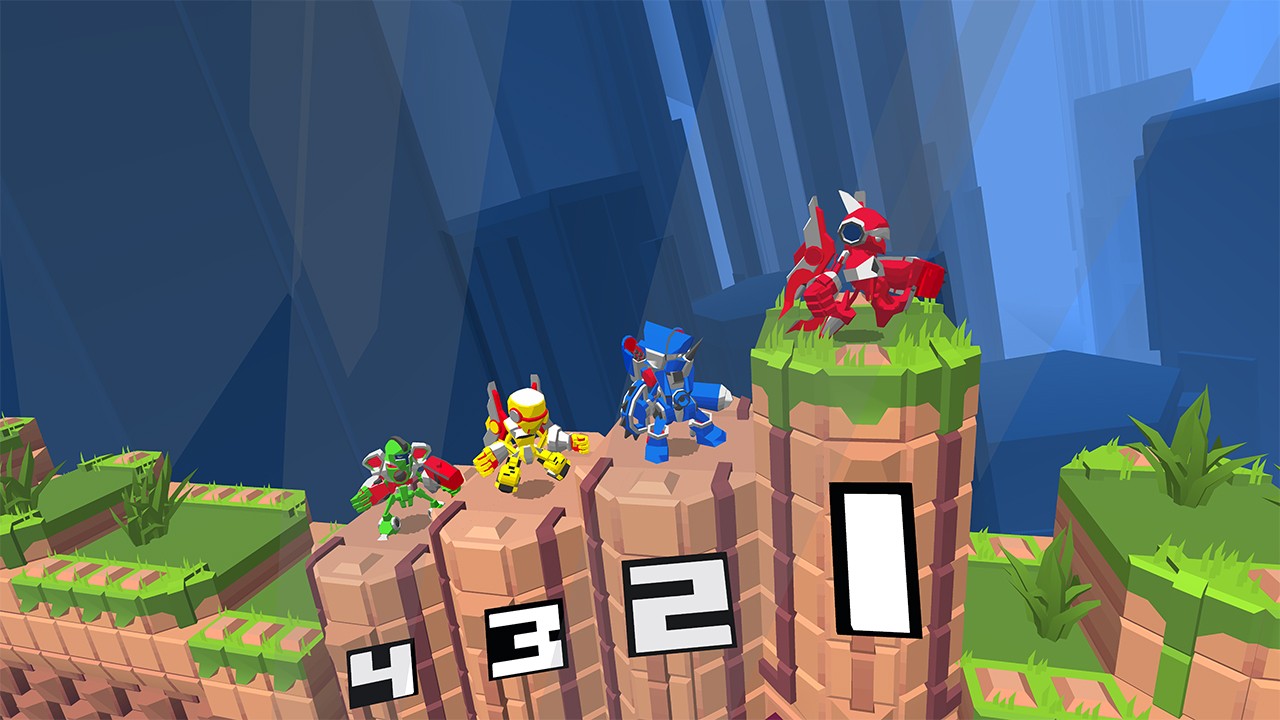 What doesn’t look great is the 2D environment. You don’t notice it when you’re fighting, but when you’re platforming you really notice the low detailed grid map; the backgrounds look great as they can be more detailed and don’t have to be destructible blocks and it’s a shame the foreground suffers from a gameplay mechanic.

The sound design is enjoyable, but repetitive, the boss music is great and puts you in the mood to just whoop some robot butt. The hub world music is generic and bubbly in style. Each level has its own theme which is altered each stage. The sound effects when fighting is great and you can really feel the weight of each hit you land.

The game also has a fighting mode with a multiplayer component, for this review I wasn’t able to test it, but if it’s anything like the single player it will provide a good couch Co-Op fighting game and possibly a good multiplier fighter?

Overall, this is a great indie title if you are into a Mega-Man x Smash Brother Hybrid, more so Mega-Man fans will enjoy this as it isn’t solely focused on fighting. If the story was more fleshed out and looked a bit better outside of the robots, it would be a must-have, but currently, it stands as a solid title within a mixed genre.

If you are into Mega-Man or Smash Brothers or the possible mixture of both, you’ll enjoy Megabyte punch. The charter design is excellent and the fighting is top notch, but everything else falls a little short.