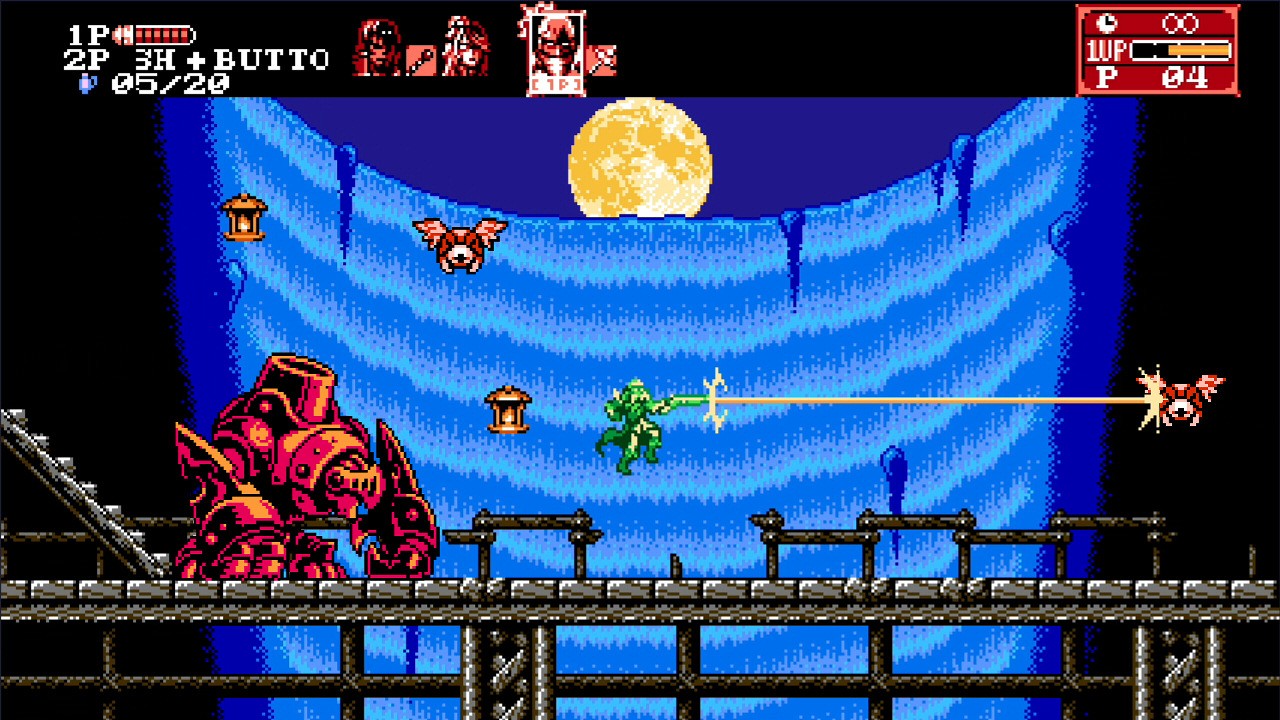 The launch of Bloodstained: Ritual of the Night is, without a doubt, one of the most divided game launches in recent memory. While I myself had some amazing fun with the title, it was inarguable that the initial version wasn’t well optimized, was certainly buggy, and, even now, runs a bit subpar to what we see on the PC and other consoles. Don’t get me wrong, it’s completely enjoyable and playable now, yet there are some slowdown and drops in certain areas. Well, we knew the Switch was weaker, but there’s no reason to hold that against the game or the console. One thing that is without fault, however, is the prequel that Init Creates crafted to help celebrate the launch of the game. Bloodstained: Curse of the Moon was a fantastic pixel title that looked and felt like the best NES Castlevania that I never got to play, complete with massive bosses, some great Metrovania exploration, and a unique character switching system that kept the game versatile and special. Init Creates apparently saw success in their own creation, because, despite there not being another Ritual of the Night on the horizon, we got a brand new Curse. Bloodstained: Curse of the Moon 2.

Zangetsu is back, and, this time, he’s learned of a massive tower that’s apparently full of demon energy and is calling to him, almost taunting him, to come and destroy it. They also brought back the Demon Castle from the first one, because that’s how many freaking demons there are. Zangetsu, who is known for taking taunt bait, is now on his way to do so. However, he’s only just inside the door when the exorcist who alerted everyone, Dominique, shows up and makes sure he knows he doesn’t have to go at this alone. With the usual amount of grim, brooding indifference, Zangetsu reluctantly pairs up with Dominique, and, if that isn’t enough, he later makes friends with a sniper and a corgi in a mech suit. That last part isn’t a stroke on my part, Hachi is a new dog who has a Steampunk battle armour, and let’s just keep that all in mind moving forward.

Upon first glance, players would be forgiven for thinking that Curse of the Moon 2 is, essentially, a quick and dirty sequel to the original Curse of the Moon. The elements are all there: you’ve got different characters that you quickly toggle between, a good deal of monsters to stab, shoot, punch and spear to death, and plenty of versatility in the where and how you travel. You have alternate weapons that use up a separate track of energy, and you find more of these as you move forward. Zangetsu gets his whip and some other cool elemental spells back (gotta love the lightning balls!) whereas everyone else gets different dope stuff. Dominique, for example, is a healer and a fighter, and can summon a plant that carries a massive heart for HP. If you don’t think about having her summon that and then quickly switching to another character, you’re not playing the game correctly. She also can carry a single use revive spell that brings all the helpers back, and that becomes one of the most important strategic gems to carry around in the whole game. The sniper, Robert, has the range attack that can be essential in boss fights and also can crawl, wall climb and occasionally throw grenades. Hachi has a floaty steam jump, can punch the dickens out of everything and also has the most HP out of any character, making him an ideal tank. Also, if he dies, he bails out of his mech suit at the last second, so it’s kind of fun to see that happen, whereas everyone else just faints. 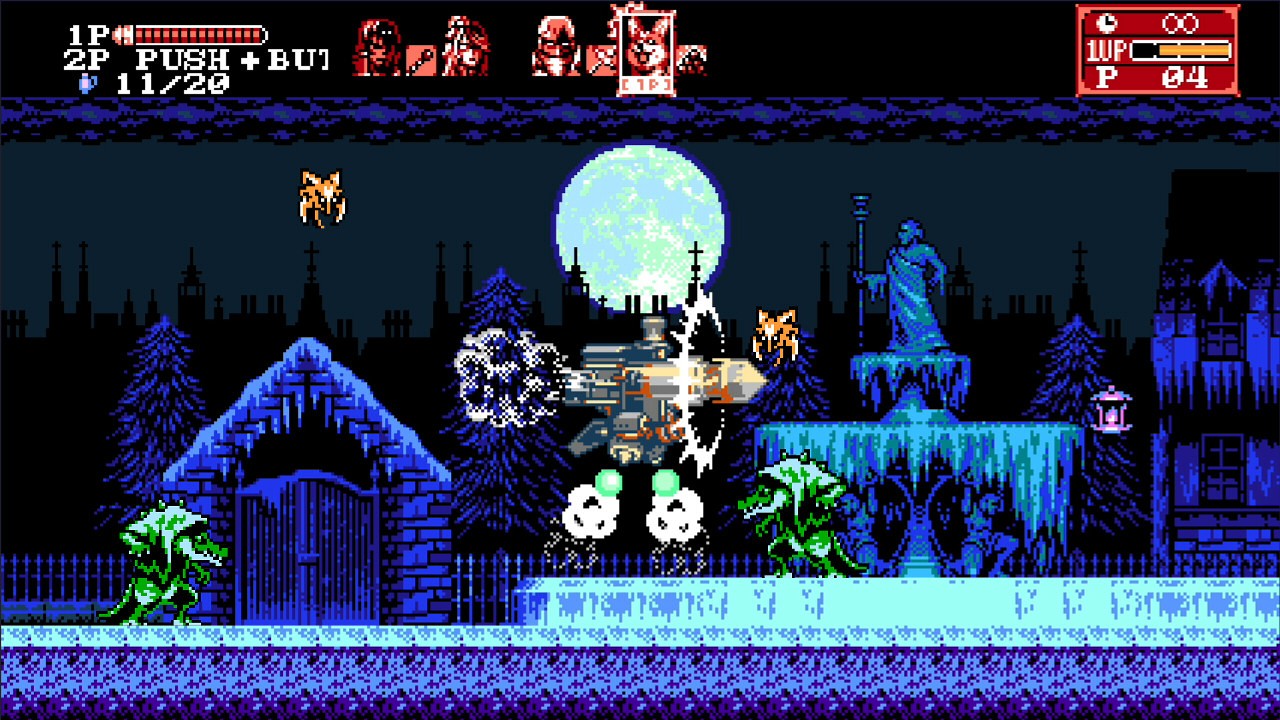 Once you get going in Curse of the Moon 2, you begin to appreciate that we got another trip into this world without the need to really create a purpose for it existing. With Curse of the Moon 1, everything was leading up to the conclusion and the establishment of Miriam and what would happen in Ritual of the Night. It was pretty serious and dark, almost, with plenty of story driven points that needed to be shoehorned in through exposition and through the framework. The game wasn’t really allowed to breathe and open up as much as it would like to. The exchanges between characters established relationships and purposes, but it was very utilitarian. As absurd as the inclusion of a dog in a robot suit may sound, it’s that level of tension break that helps keep the game exciting and enjoyable. The first four stages all end with the playable characters being “rescued” by a new character, who then joins your roster despite other misgivings. It’s like the action movies of the 80s where we showcase the new hero by having them “save” the other heroes. It’s silly and strange, but it works because of audience enjoyment. I was almost disappointed when Hachi was the last character to join…for a while.

Instead, you now get to see the gamut of possibilities for both what Init Creates envisioned for Zangetsu and also what a fantastic Castlevania adjacent game that they can create with the time, money and power that is provided. When I loaded up the game and saw that they have an absurd 32 save slots, I knew I was in good company. The world of Curse of the Moon 2 is labyrinthian, allowing for massive twists and turns everywhere while still ultimately leading to the end. Skeletal guides give you indications about which way you SHOULD go, but screw those guys, they’re dead: how good of guides can they be? The worlds through which you travel on your way to the tower exhibit a huge number of terrains, from frozen castles beset with projectile flinging eyes, to molten fire pits that are teaming with ferocious, charging hellhounds. There must have been at least twenty or thirty unique mobs that I encountered, each with their own attack patterns and ideas, and they even changed up a bit from time to time. There’s no end to variety in sight, and the whole game is carefully kept in check because the controls are still designed with NES blocking in mind: your jumps and movements can easily be stocky and stunted if you haven’t planned correctly. You gotta still move like you have a rectangular controller and thinking in this way will keep you alive.

I also enjoyed that Curse of the Moon 2 repositioned the difficulty into a different sort of stratagem. Putting the core choices strictly into “veteran” and “casual” gives a better sense of balance and also outlining what you’re in for. If you are someone who sincerely wants to live that NES challenge life, you go with veteran, taking into account the knockbacks that you’ll have to deal with, and a few lives to succeed. If, like me, you just like to wreak havoc upon the undead and be a badass demon slayer, put it on casual. Unlimited lives and no knock back means that you can just keep soldiering forward even if you’re trash, which I definitely was at times. The bosses are so freaking big and exciting that you need to keep certain things in mind while playing veteran, like figuring out better attack patterns and windows for survival. On casual, my strategy has been frequently “walk up and mash the attack till dead,” and that barely worked 40% of the time, so I’m glad I had unlimited lives to deal with things. Especially the massive crab/Spartan/drill boss thing that beat my ass the first time I saw it and then proceeded to tidal wave me to death at the zero hour the second time I had to fight it. 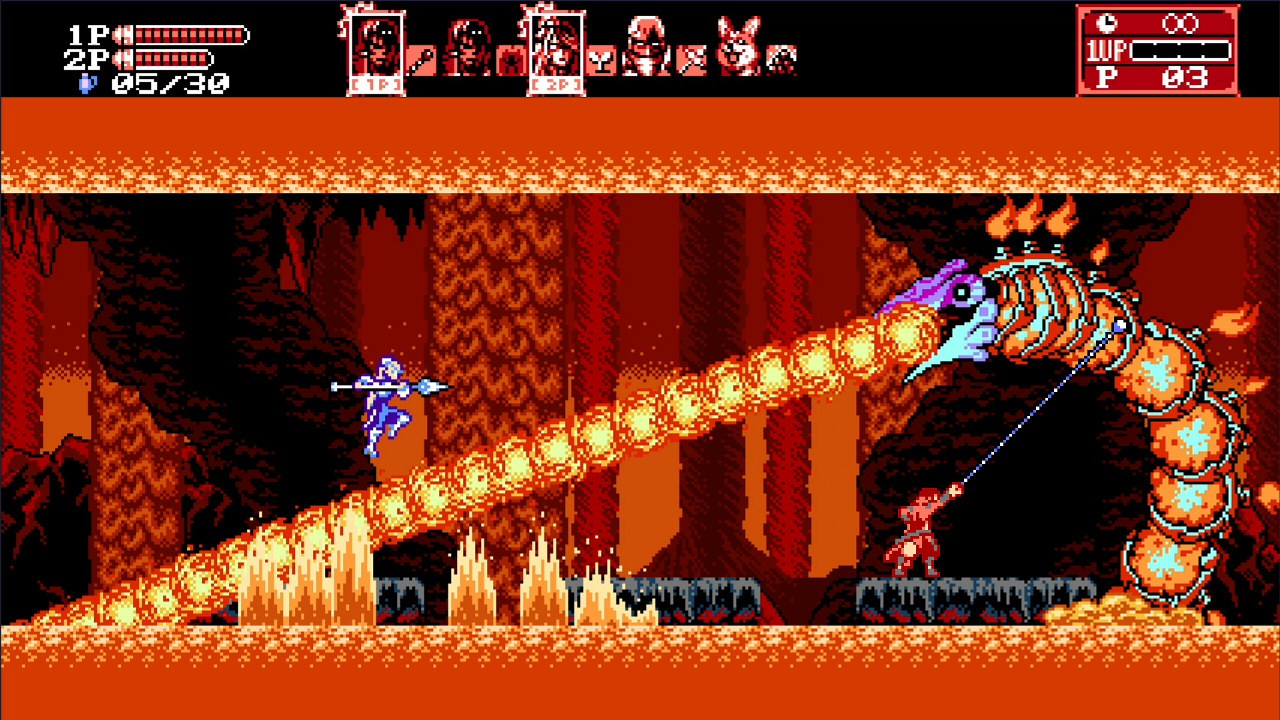 Yes, like the original Curse, Curse of the Moon 2 will drag you back into the game to replay from different angles and different perspectives, and that’s not a secret because you can see there are different episodes to unlock from the get go. Yet that’s one thing that makes Curse of the Moon 2 so special. I loved seeing a route or a door that I couldn’t reach and thinking, “I’ll be back to check that out later.” Almost as much as I loved seeing a wall and thinking, “I bet I can hit that and find something hidden.” Most of the time, I was right, and that is such a great feeling. It’s synchronicity between the game and the player, and that comes from intuitive design and natural, exciting crafting of what should and should not be present within a good Metrovania game. I sincerely want to spoil so much of the latter game and am carefully refraining, but let’s just say that things get WILD the longer you play, as the story opens up further, the party opens up further, and you fight these beautifully terrifying bosses that seem to possess no end of fright in shape and scope. The fact that I just had to walk into freaking darkness, into an area that definitely looked like a pit where I would fall forever and die, and that was where a boss was hiding? Loved it. Absolutely loved it.

Let’s put this all on the line. If Curse of the Moon was Hellboy, Curse of the Moon 2 is Golden Army. It’s everything put out there with even more of a grand scope, more ideas and more surprises in both pacing, tone and expedition. The game dwarfs the original, but only if you put in the work. The soundtrack is a chiptune dream; the levels are intricate madness, and I positively loved working again in the character swapping motif. This didn’t make me want to fire up the original, but it made me so appreciative that it exists so I could play this one. I can’t believe I burned through it so fast, but that’s because I couldn’t stop playing it. Next up: trying to beat it on veteran. Wish me luck.

Bloodstained: Curse of the Moon 2 Review

I find Curse of the Moon 2 to be one of the best damn adventures I’ve played in memory and an unfailing upgrade to an already excellent game.