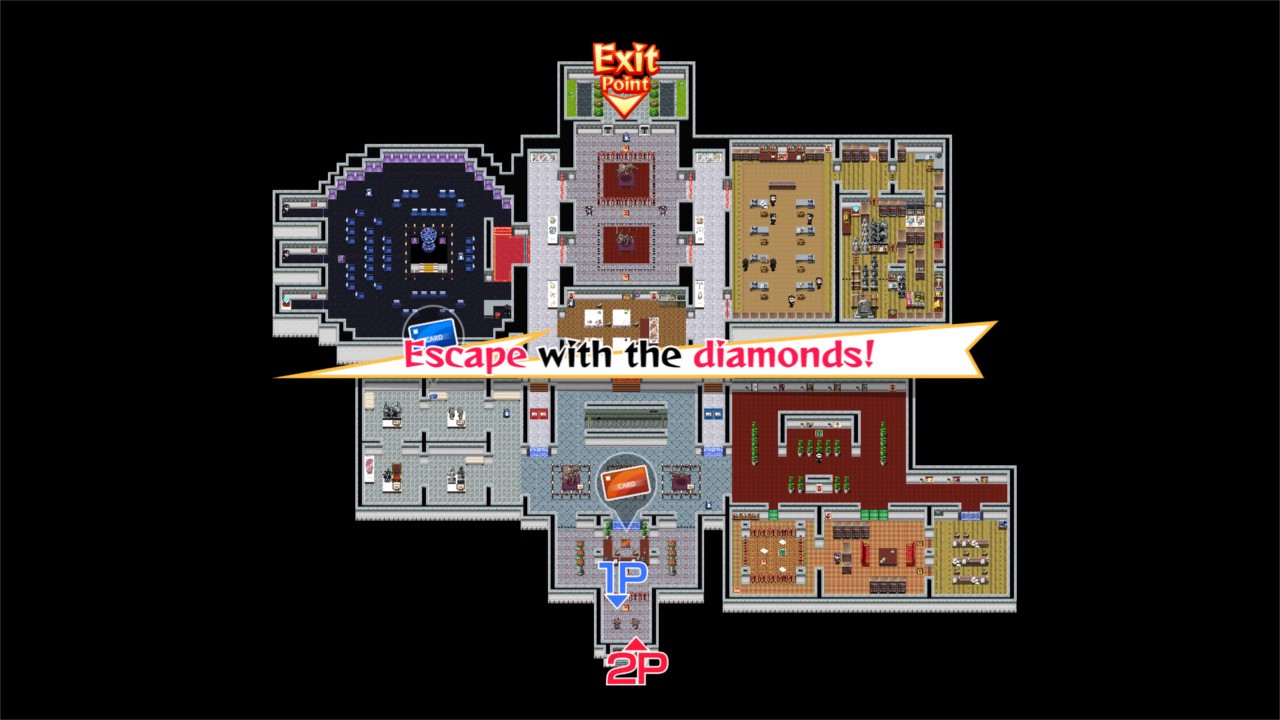 This title was created using the game-making engine RPG Maker, using some of its assets and basic game-design features. RPG Maker games get a bad reputation for limited art-design and gameplay concept. Luke and Rebecca takes a pretty standard art palette and idea, but frames the gameplay in a world of mystery and crime. However, this game is simple and its execution is a great example of a great concept, let down by its poor design quality.

The game starts with a small introduction, setting up the game’s themes. The elusive criminals, ‘The Familiars’, always get what they’re after. And what they’re after in Luke and Rebecca? Diamonds. In each stage the player has to find the diamonds, navigating the stage and escaping without getting caught. The enemies? Security guards, robots and the maze walls that keep you from escaping. But there is a way out. The player as Luke must collect key cards to hack and open doors, evade capture and find the exits before the time runs out. You are timed, and the game keeps score of your being caught, adding a level of challenge. This game is rather bare-bones when it comes to play. There isn’t much to do in the levels, and once you’ve played one level – you might as well have played all of them for their difficulty. Whilst there is some evidence of a level-curve, I found the levels bland and lacking enough variation to provide a decent challenge. Co-op play is more exciting, forcing players to work together to work with some of the strategy to beat their times. While the level design was interesting, and showed the progression of a bigger-and-bigger heist narrative, it failed to meet expectations. The enemies are slow and give up chasing you quickly, or if you hide behind something barely obstructive. Young kids would probably find this easy and fun to play, but older players may find its simplicity boring. 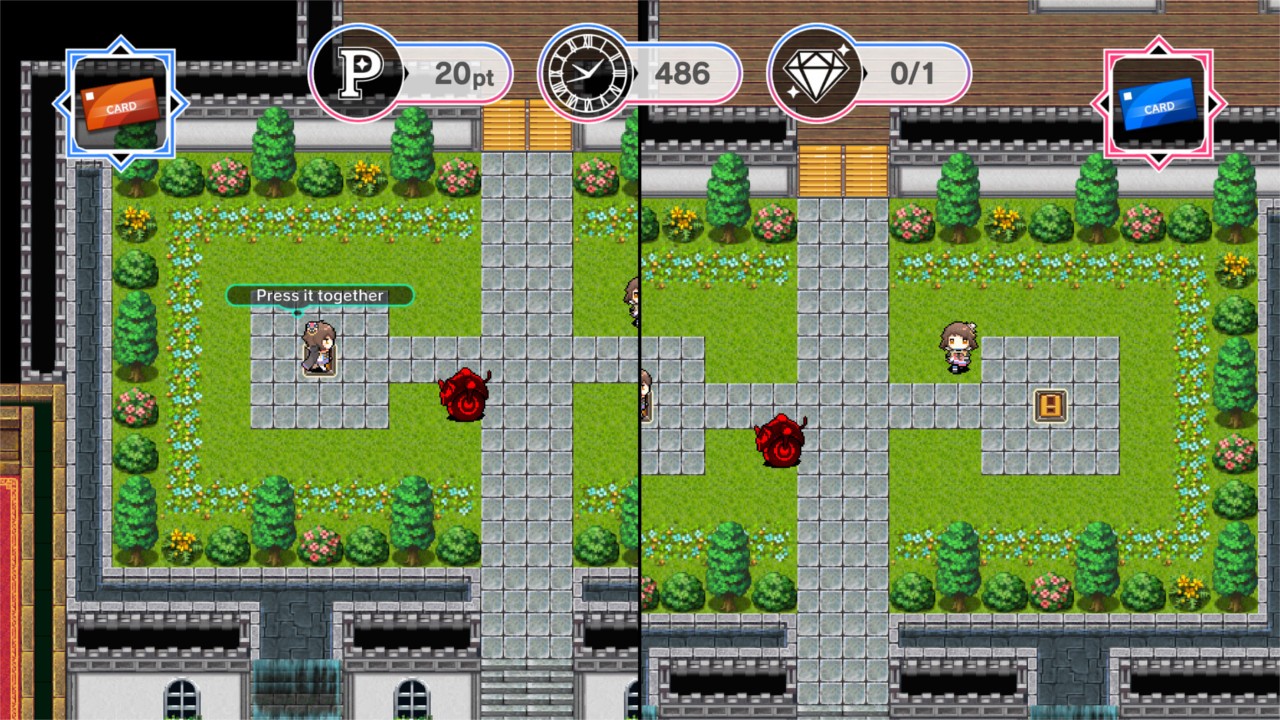 The game is not compatible with a pro-controller, which limits freedom of play, and whilst it can be played on switch lite this pretty much renders Co-op play void. Unless you connect separate joy-cons (irrelevant if you only have the lite), then you’re left with a rather short, a tedious puzzle game that draws you in with pretty title-screen art and advertisement – but does little to break the mould. I’d call it a puzzle-adventure, if there was much sense of the latter half of the label. The stages feel entirely isolated from their outside world. The criminal conspiracy is left to the few lines of opening exposition and then dropped in favour of repetitive gameplay.

The artwork is almost entirely from RPG makers standard tile sets, meaning that the artwork will be familiar to most people with some familiarity with indie games. Great things can be done with these types of game-making engines, fascinating concepts with 2D art and limited gameplay such as those seen in Mad Father, Misao and Viviette prove this statement. However, without expanding the art palette or visual direction that the game takes, this RPG maker game sits rather low in the rankings of good RPG maker-style games that I’ve played. 8-Bit/16-Bit doesn’t have to mean poor quality, but Luke and Rebecca doesn’t do its concept and attempt at world-building justice. Despite this, I enjoyed the music of Luke and Rebecca. It provided some atmosphere and tension which the rest of the game failed to match. It isn’t by any means complex music, but gives the sense of the direction that the developer may have wanted to create originally. I would have liked to see more music tracks, however, as the selection was very limited. Further, the small amounts of voice acting both in Japanese and in English felt wholly unnecessary. Sure, it added something. But putting sprinkles on cement doesn’t make it taste better. Without a narrative or an actual dialogue to justify voice acting, this felt wrong for a game of this length, type and quality. 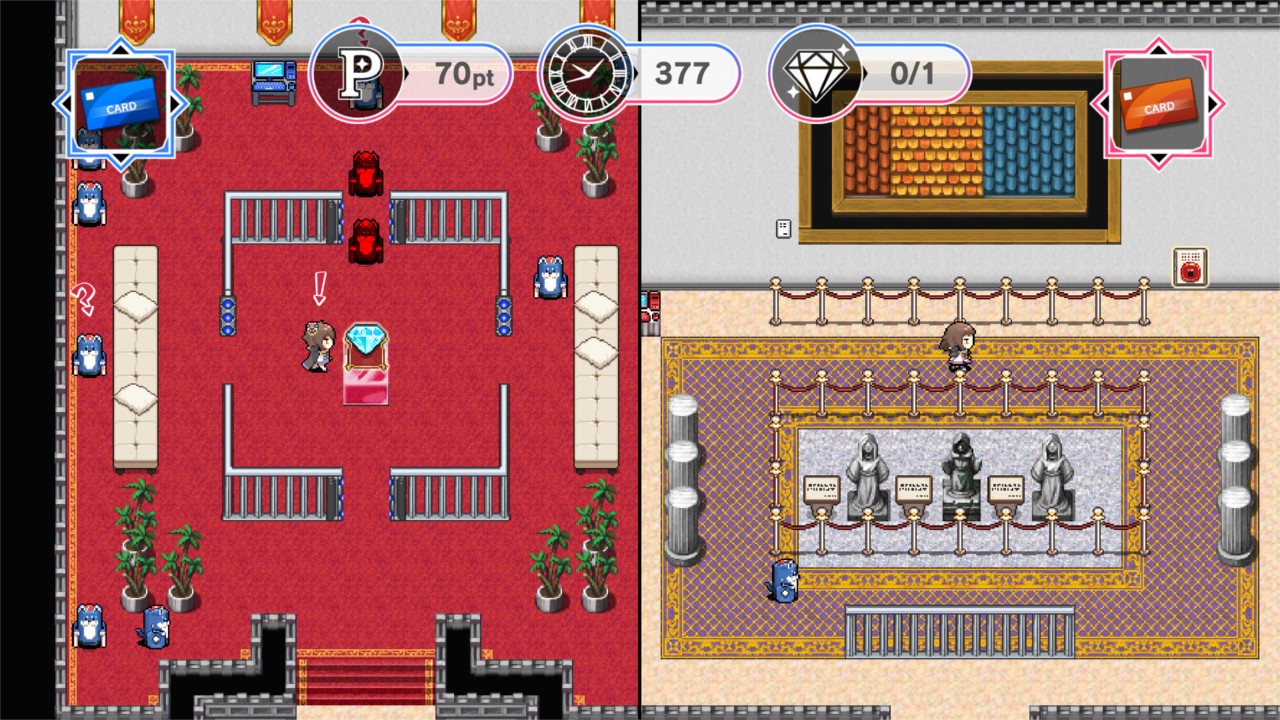 This game is without doubt shovelware material and belongs to the poorly made hypercasual and mobile games in the depths of mobile app stores. If you really enjoy RPG maker titles and want to support these creators so they can make better games in the future, then I’d give this a play. Especially in Co-op, where the features shine the best. But I won’t be recommending Luke and Rebecca. There are quite frankly better 2D game maker titles to explore.

Luke and Rebecca is a good concept that is demolished in execution. The puzzles are basic, the artwork is generic and you’d be better saving your money.