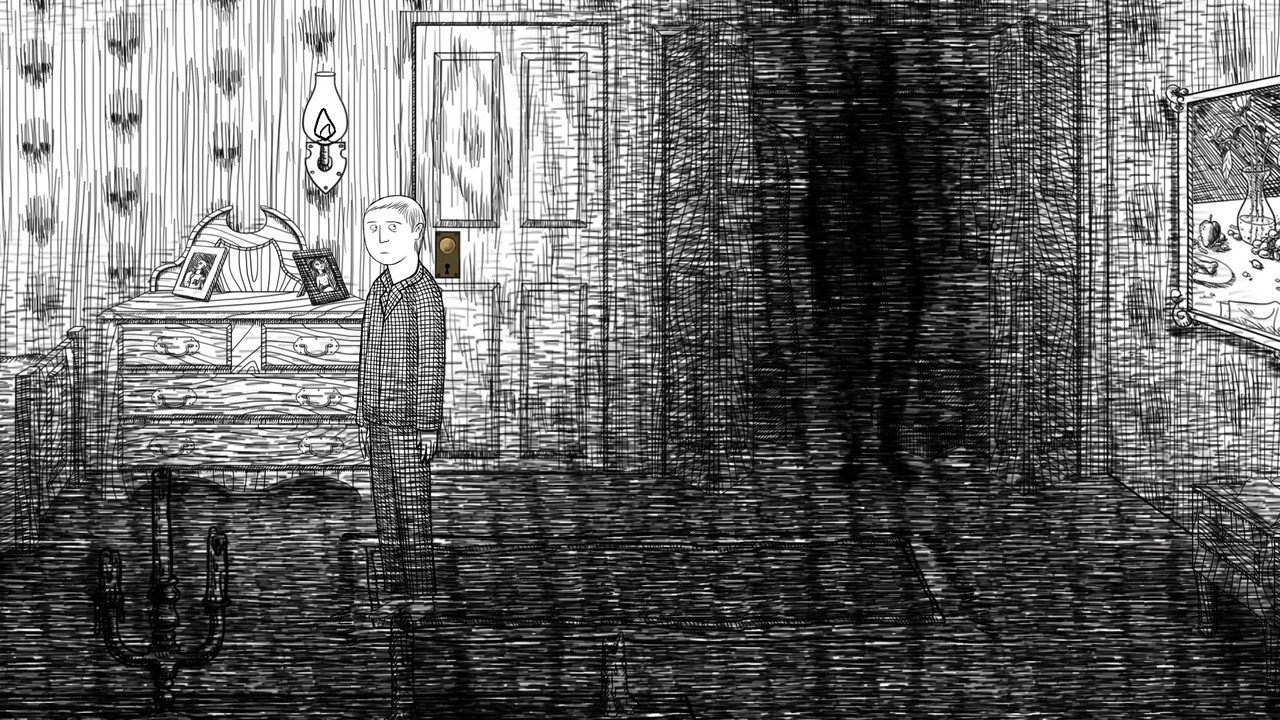 Mental health awareness is the topic of the day for a lot of games of late, and so it should be. If you break your arm, you get it fixed, but have underlying problems such as anxiety, grief and more and it’s always been a bit taboo. Thankfully, things are changing for the better and with indie title Neverending Nightmares, we touch upon the horrors of our mental state more so than literal monsters and literal blood and guts. Not that you won’t be seeing that in this game.

After finishing the game in one sitting, regrettably, at night just before bed, I not only stayed up late to finish it, but also to rock myself to sleep as my mind was playing tricks on me, I looked up the title to find out a bit more. Originally on the PC some years ago, this psychological thriller got a lot of backing in the development stages and it’s paid off as the themes are dark but need to be challenged head-on. There isn’t as much depth as I might insinuate, but Neverending Nightmares is a disturbing, if brief, adventure.

Promising to protect your sister no matter what, you awake in your family mansion with little else to do but walk through one section to another. This means opening doors in the hope they will either reveal some freedom from torment, or the slight denial that’s there’s nothing behind it. This constant fear that something will come out of the shadows is excellent. It had me on edge, but the continuous door opening was very monotonous. However, the superb art style and black and white theme is brilliant and a real standout. 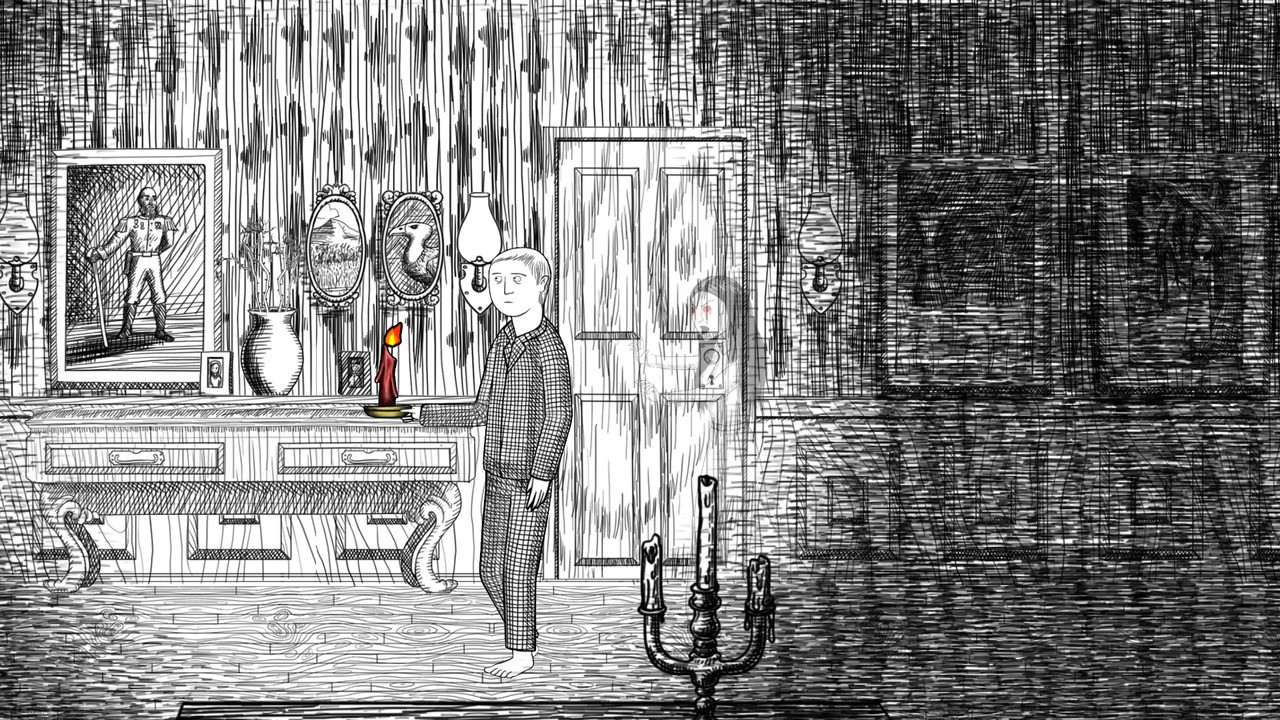 There are only two things you can do other than walk left and right and that’s interact – open doors and pick up the infrequent item or two and run. Running was a godsend at first, as after the first dozen or so doors, I was getting a little bored. Sure, there were a few dark moments with some seriously morbid cutscenes, but there wasn’t enough interaction. From here, I would sprint everywhere, but the protagonist has the lung capacity of a stone and insists on stopping quite frequently. The upside is his panicked stricken vocals add to the tension to the game, and there’s the odd jump scare, manipulating sounds that make it quite impossible to switch off to the game.

As the story progresses (expect nothing too literal, it’s in the title), the location shifts to an asylum – always a terrifying scenario. By introducing instability, the game mechanics change slightly, and you’ll encounter other characters that can end you. Granted, you won’t die and get a game over, you switch to the most recent checkpoint, which isn’t always apparent until you die, but check every room as you go along and you won’t respawn far. The challenge then spikes in places, which is mostly timing, but it can be quite frustrating when you can’t see a solution, embarrassing when you do.

Throughout this black and white tale are these sinister cutscenes, or props throughout the rooms that insinuate menace. Sometimes they bear fruit, others they don’t. This constant threat is excellent and instils a bit of fear and distracts from the repetitiveness of running through door after door after door. Where there is a lack of colour, when the blood splatters are introduced, they’re pronounced and striking. Blood doesn’t bother me in games any more than anyone else. However, through the majority of the game, it’s used effectively, but overused in the asylum to the point of gratuitous). It’ll all make sense in the end. Perhaps. 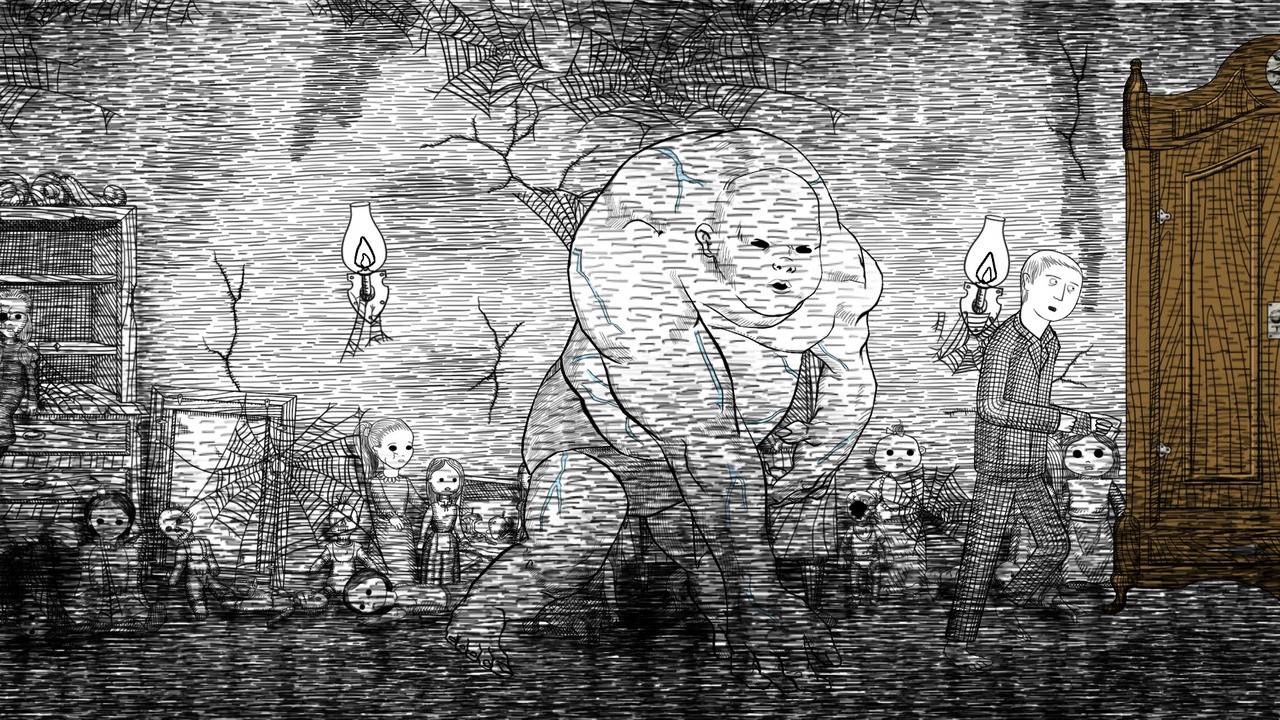 To play on the title, as I’m sure everyone else will. There were moments where I was getting irritable, going through one door after the next, getting impatient then sprinting and running out of breath. There’s no real variety in the gameplay, and while the ominous presence of ‘something in the dark’ is continuous, and the ambiguous nature of the story raises questions – as it should do, I found playing through the game was a little like treading water.

There are multiple endings in the game and to unlock the paths that take you there is tricky as there isn’t any clarity on what you need to do differently. Through the next playthrough, everything felt the same, and I was aware of most of the replayed shocks – powerful, but not as much the second time. Would you repeatedly playthrough to get all the endings? Yes, but not in one go. It’s achievable in one sitting, but just playing once was a slugfest and I’d recommended one ending at a time, i.e. consecutive days. The atmosphere in the game is excellent throughout, and you don’t want to dilute that just for completionist values.

The themes explored are excellent and are highlighted very well. The real star of the show is the presentation. At first, seeing the chicken scratch black netting that appears in the foreground looks messy, but before long, you can understand the artistic approach. While Neverending Nightmares is unlikely to give you real nightmares as such, the content is very dark, and as mentioned powerful stuff. However, the monotony of walking, running, walking, running through the door after door gets irksome.

Thankfully, it’s all a bad dream, or is it? An excellent concept that explores mental health, but let down by the execution of dull gameplay. The atmosphere and presentation are certainly on par, but the repetition will slowly eat at you.