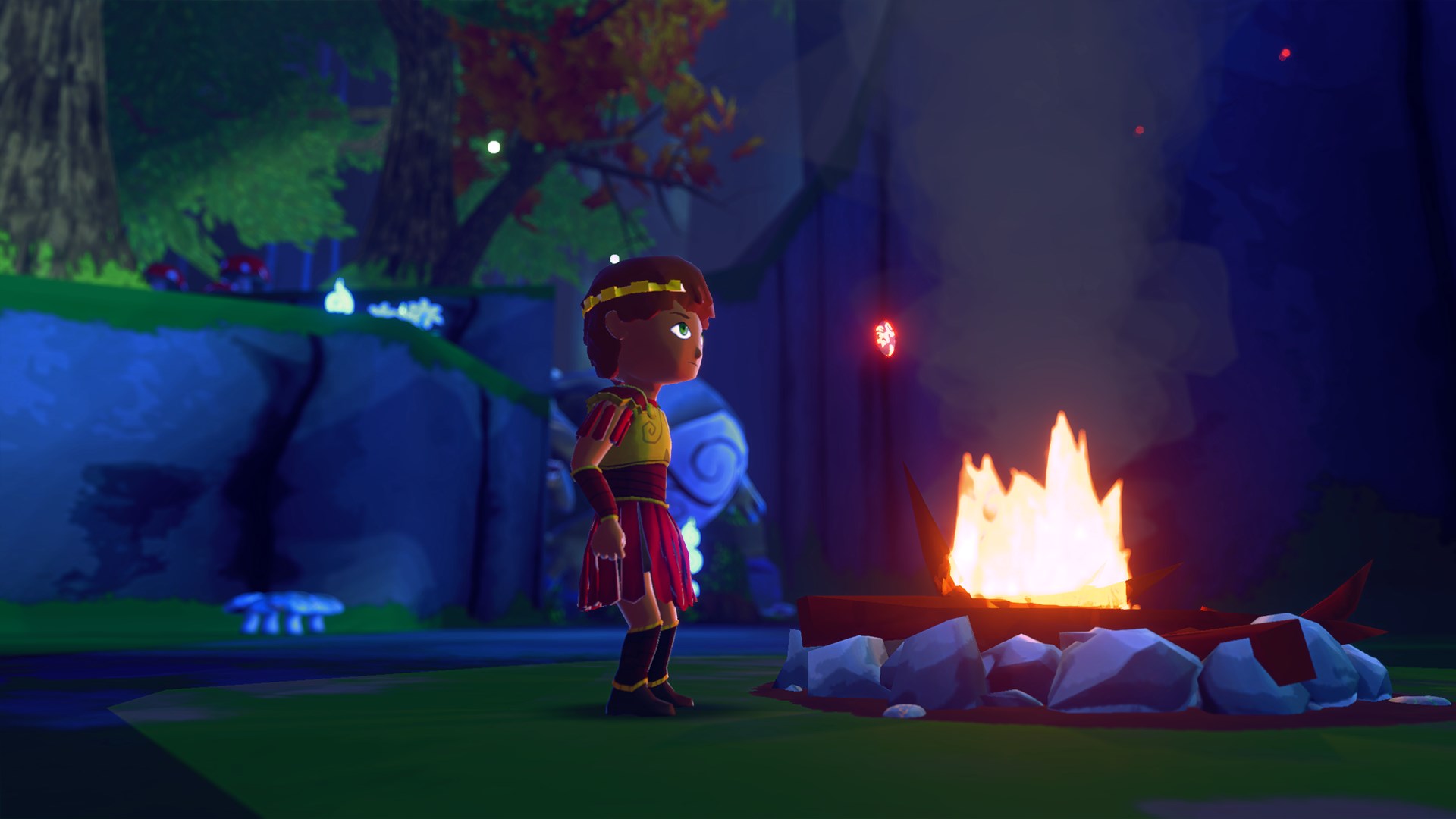 Warden: Melody of the Undergrowth​, is a 3D platform game developed and published by indie game company Cardboard Keep. This game is available on Steam and on various consoles, and is also available to download through the ​official website​ for PC, Linux, and macOS. The base game costs around $20, but options for ​purchasing DLC​ containing a 127-page artbook and game soundtrack are also available.

The game’s synopsis reads, “Trapped in an ancient forest, a young prince searches for a lost god. Here he befriends the spirit of a young girl and a volatile child, and they quickly find their destinies intertwined. Third-person action-adventure inspired by genre classics of the N64-era.”

When I first booted up the game and bled into the introduction, I confidently agree with ​Warden: Melody of the Undergrowth​’s summary: within the first few minutes of the intro, I was immediately brought back to the first time I played breakthrough titles like ​Banjo-Kazooie (B-K)​ and ​The Legend of Zelda: Ocarina of Time (OoT)​. Funnily enough, the art style to ​Warden: Melody of the Undergrowth​ leans more towards the iconic style of ​The Legend of Zelda: The Wind Waker​, instead of the classic ​OoT.​

The beginning of the game starts with Prince Tevian and his father, Emperor Magulus, battling plant monsters in the forest. After learning the battle system from fighting a few monsters through the guidance of Emperor Magulus, the story progresses and Tevian gets separated from his father. Later, he wakes up in an unknown place and meets Nyona, the guardian spirit of the forest; Prince Tevian learns that he has become the new Warden of the forest, destined to bring back peace between the forest and humans. Along the way, Tevian meets the spirits of the past two Wardens – Bitt, a (literal) spitfire male spirit, and Medeira, a female spirit that has an immaculate green thumb. Bitt and Medeira have special abilities that help them access different locations with each given ability – Bitt can levitate using fire abilities, and Medeira can grow flowering platforms to access locations unavailable by simply jumping. The player can switch between all three characters at any given time. I really enjoyed being able to switch between characters, even when it wasn’t necessary to do so. I hardly played as Tevian unless it was absolutely necessary to do so – I found his character very bland and unbelievable (he just lost his father yet doesn’t really question the tasks given to him, he just rolls with it like no big deal). Thankfully, we can switch out when we want to, because Bitt and Medeira have way more personality… which made the game more bearable to play in the long run.

Enemies and monsters range from flowers that spit out seed attacks, plant-esque tentacle monsters that use weapons, masked tribals and mud monsters. I greatly enjoyed the boss battles because they really channel the old-school N64 nostalgia brought on by ​OoT​ and Majora’s Mask​. My favourite boss, and most frustrating boss, was the Giant Skeleton found in the Pyramid location. Enemies can attack each other when placed in the right formation, so when I fought the Giant Skeleton, I had him attack all of his skeleton minions first before tackling him in the end. Much like a classic Zelda game, boss battles require some strategy – making them challenging but also fun (sometimes). 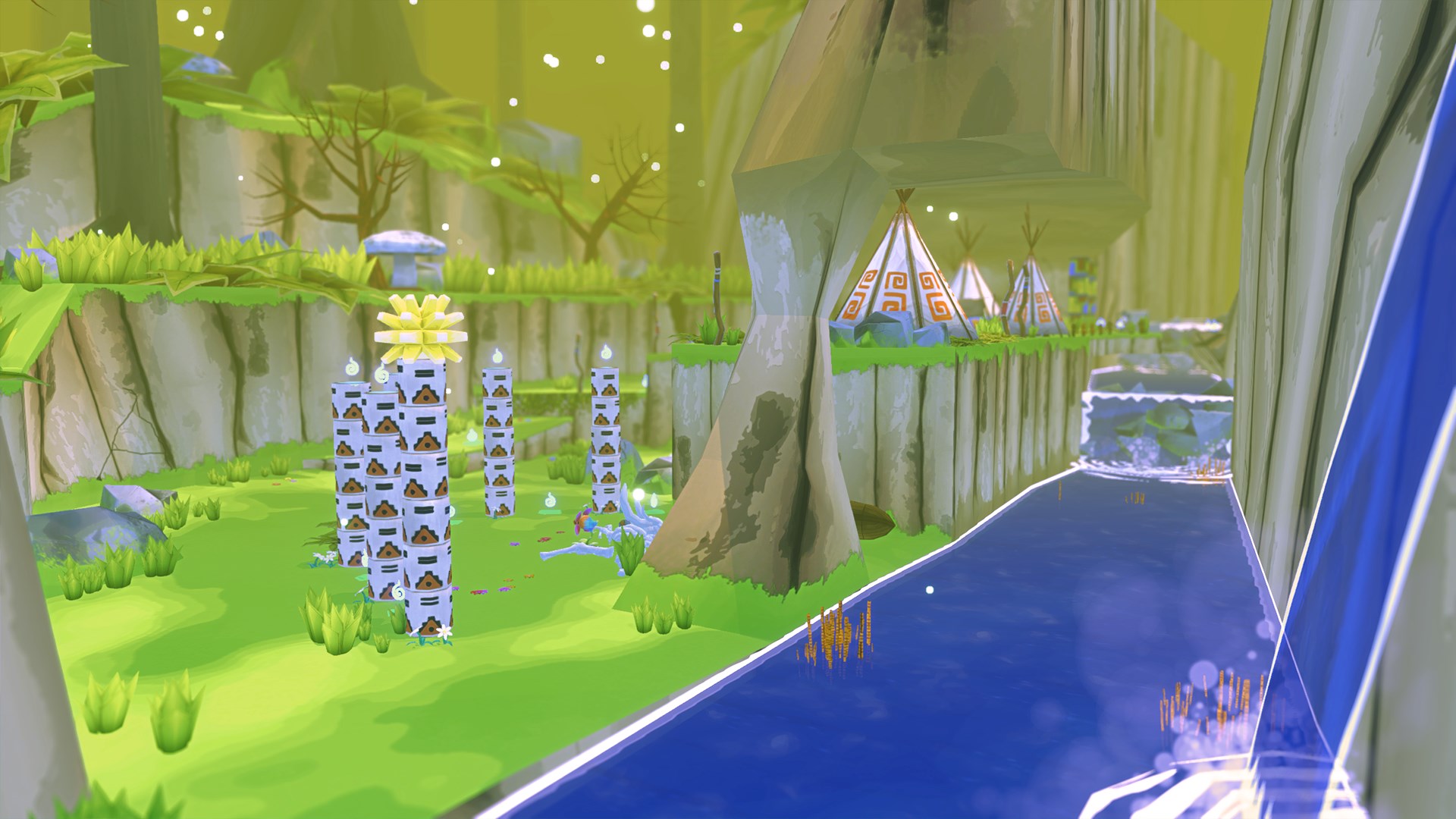 The game plays like a classic Nintendo 64 game to a “T”. The developers could definitely capture the finesse and nostalgia of a classic ​Zelda ​game, yet produce a unique game entirely their own. The environments are beautiful, and they did a great job producing the music to the game. The game incorporates puzzles in the dungeons, but they are fairly easy to complete. There didn’t seem to be a connection between the player’s goals and the terrain/environment, so when I arrived at a puzzle, it didn’t feel organic and that it helped move the plot in any way. Once I beat the first few puzzles, they felt haphazardly tossed in and completely unnecessary.

One aspect I particularly loved about ​Warden: Melody of the Undergrowth ​was that the game gives you an ample amount of lore to learn that helps paint the background information of the game. Players can learn detailed information about important characters, spirits, the forest, dungeons, and various other locations. Lore and story building are two of my favourite attributes in games, because I can really see that the developers genuinely cared about their game to make a flourishing backstory for players to learn more.

Though the story is beautifully paced and full of lore, the game’s rating gets a huge markdown because of faulty mechanics and the absolutely ​awful ​battle system. There are a few points that really negatively polarise my review for ​Warden: Melody of the Undergrowth​: Weapons/Combat​: Your weapons will break over time. At first I enjoyed this aspect of the game, but after a while it became really annoying. There is a vast majority of weaponry available in all sorts of forms – sticks and wooden clubs to steel swords, scythes, and HUGE hammers that can destroy boulders. Each character holds up to three weapons, plus a torch, so if all of your weapons break, you can use a separate character as backup if need be. I enjoyed this strategic approach to the gameplay, but the game becomes way more difficult to play when you have to play as a specific character and all of your weapons are destroyed because you had to battle your way out of a particularly spammy dungeon.

This was the case when I was working through completing the Pyramid map. There is a point where the map is completely dark, and you can only navigate if you light all the braziers in each room. If your weapon breaks and you die, you respawn at your last checkpoint (the closest bonfire in the location) but your weapon is gone. The skeleton enemies in this location become really spammy and can jump you up to five or six at a time if you don’t kill them immediately. If you don’t have any weapons, you can barely progress. 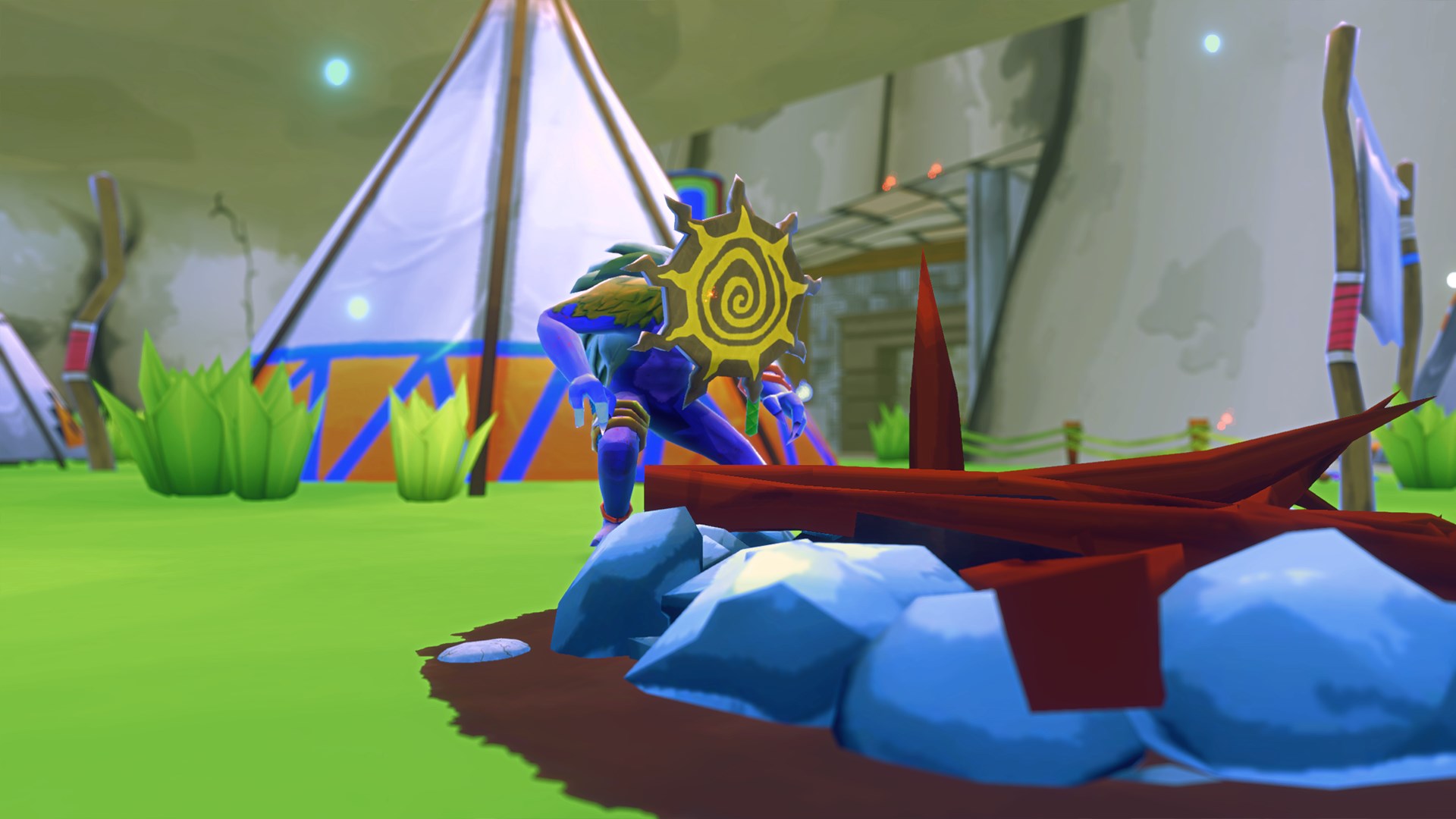 That said, the combat in this game is absolutely atrocious. Enemies have no trouble attacking you, but when you attack an enemy, the hitbox is wonky and you either miss, or come up short and get attacked in return. I found myself getting so angry attacking enemies that I ended up trying to avoid as many as I could. However, even if you avoid combat, some enemies can quickly run after you and still attack you, even if you try to dodge (the tribal masked enemies, for example, will absolutely destroy you if you don’t watch out when you turn your back!). The combat in this game is simply not fun.

Jumping/Platforms​: Platforming can also be very wonky, and therefore exasperatingly obnoxious. The game has an ample amount of puzzles to work through, but I found myself getting heated after anticipating a clear jump only to fall down to my death. Some areas just seemed to be completely inaccessible.

Navigating the Map​: The map was one of my biggest letdowns in this game. The environments are beautiful and visually pleasing, but it is ​so easy to get lost and run in circles​. Initially, I was impressed with the quality of the art, but once I was thrown into the game, navigation became one of the biggest pain points. Unlike classic games like ​B-K​ and OoT, the progression of Warden is really hard to follow. The game boasts an open-world/sandbox navigation, but since it lacks any sort of HUD map system, I had to really limit my exploration and mote collection so I wouldn’t get lost or run in circles.

There are some other little nit-picky pain points – if you are holding your torch and enter a new room after a loading screen, the torch is back in your inventory and you have to retrieve it again and relight it. The game also has a fast travel function – sleeping at a bonfire, waking up in a dream state and short travelling to another bonfire and therefore to another location (and it is honestly brilliant) but it becomes tedious and confusing. A map in the HUD would help remedy this and save many players from getting lost.

Overall, I enjoyed ​Warden: Melody of the Undergrowth ​because of its flourishing story, beautiful environments and serene soundtrack. I almost would have preferred the game to lose all combat whatsoever and focus primarily on the puzzles. If you want to play a game that accomplishes the nostalgia of the Golden age of N64 games, ​Warden: Melody of the Undergrowth​ is your game. Despite this, the game will drag on due to faulty mechanics, a wonky battle system, and a real disconnect between story and environment.

Warden: Melody of the Undergrowth Review

If you want to play a game that accomplishes the nostalgia of the Golden age of N64 games, ​Warden: Melody of the Undergrowth​ is your game.