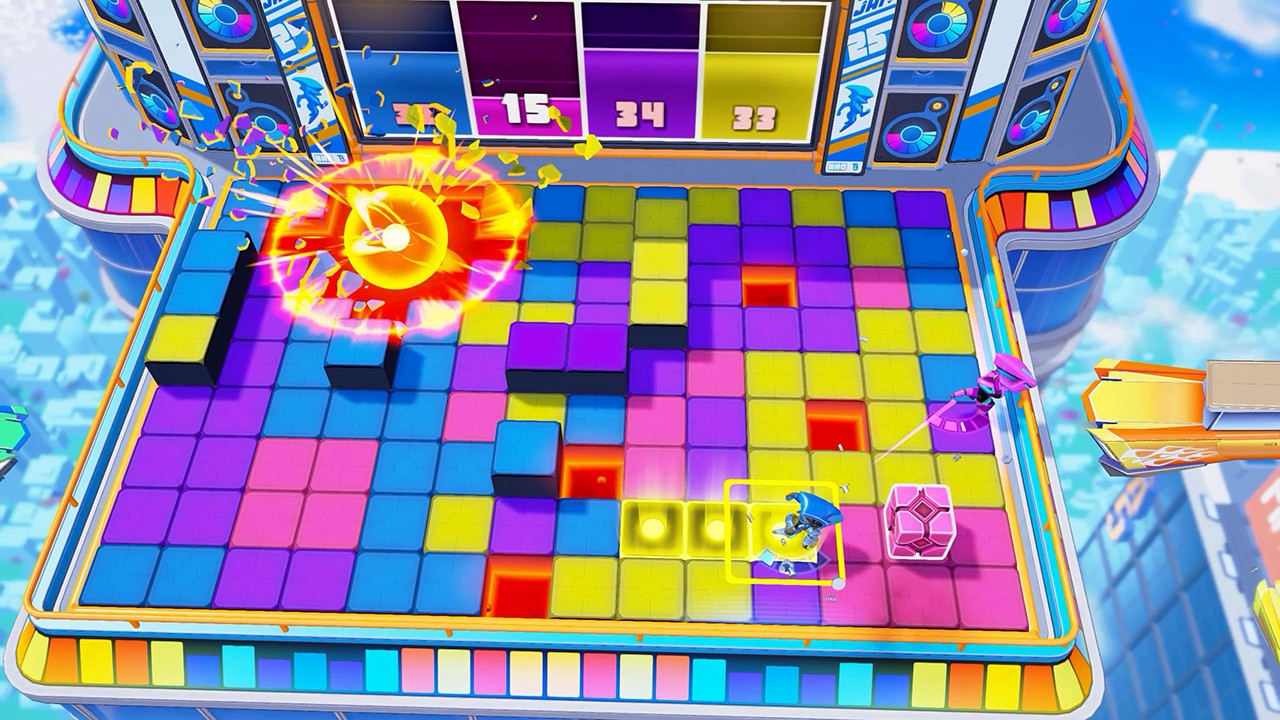 Battery Jam is a 100% party game that might be really short and limited for some people, while it can be ultra fun in short takes for others. We can choose among 4 playable cute-robot-characters: Turbo, Rocket, Slug and love – and some colours and skin variation for each of them. It doesn’t exist any gameplay difference independently of the chosen character, which ends up being only cosmetic stuff to deal with.

Before getting into the action, I strongly recommend you to watch the tutorial short videos, since the game has a good amount of mechanics that are not exactly intuitive. The controls are good and precise, but the button mapping and everything that you’re allowed to do through them are not. You cannot just boot up the game and start it afterwards, trust me. It took me a few matches to really understand what was happening there and how I was supposed to do most of the actions.

Its core gameplay consists in painting the initially greyed floor/tiles running over it with your robot character chosen colour as fast as you can. After the match’s ending, the overall score will be calculated, resulting in a winner. Sounds simple, eh? In fact, it is. But Battery Jam shines a little through the mechanics. There are two game modes available: the classic free-for-all and the team tag match. Both of them offer the same objective already mentioned, and all players have a bar next to them representing the energy amount. This energy can be used to perform some moves like shooting a burst to the opponents – or even to your teammate – causing a quick and temporary stunning, or to lift up the floor as well completely destroy it. You can also take advantage of the scenario by lifting up the ground just when any player is passing by, launching them to the high sky resulting in some good range of tiles being painted. 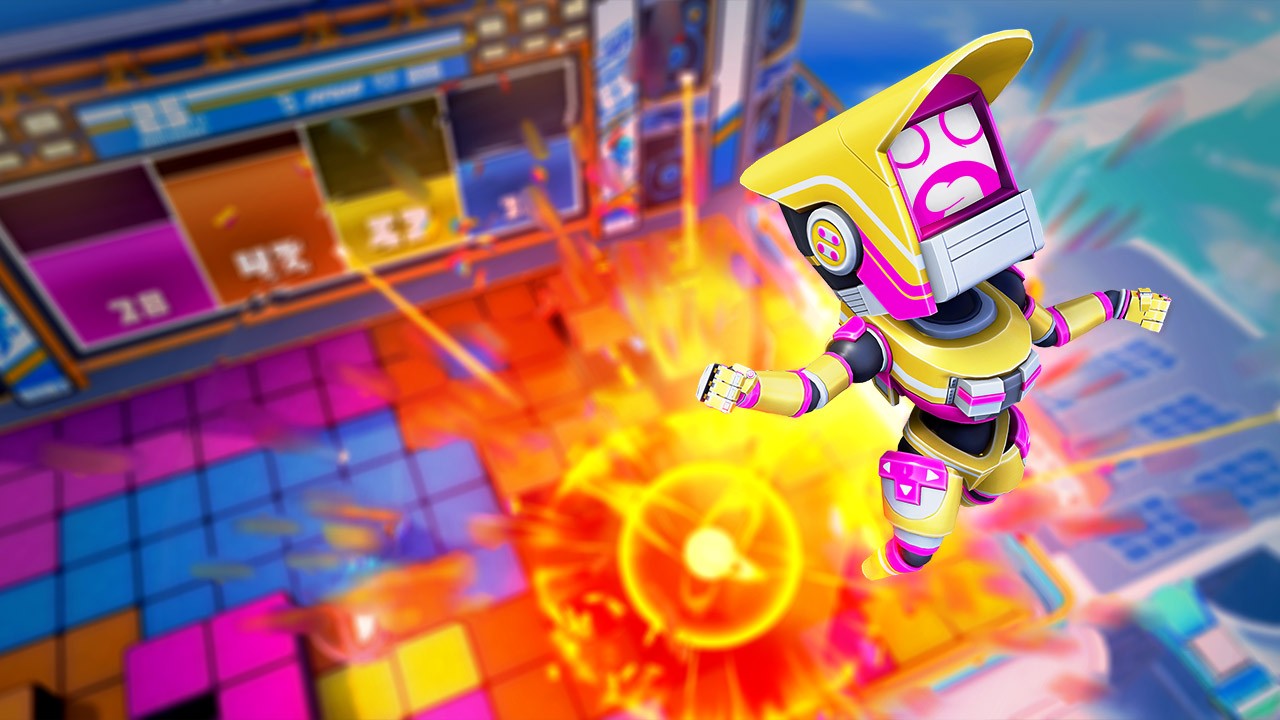 Also some explosive boxes, known as boomboxes, constantly appear during the round, and these bombs can be used to exploded and destroy every tile around them, which it’s very useful to clean up the enemy painting and make some hot lava to appear around it, or you can shoot an energy burst directly to these boomboxes and make them hit your enemy exploding and instantly painting, once again, the tile around that diameter. When the floor gets destroyed, some lava spawns under it, and it’s possible to dash over these fire surfaces in order to turn them into a greyed floor and make it available to be painted again.

Apart from that, you can push up the opponents until they reach the edges and, finally, drop them out into the lava, eliminating them and starting a countdown in order to respawn these fallen soldiers. After each match’s end, you can fortunately choose another stage or simply rematch it, which I considered a quick paced way to go and a smart game design decision. Speaking of these stages, they don’t have an exact impact on gameplay, but it can bring up some obstacles that can help you out to protect yourself from the opponent’s energy bursts and attacks.

In order to give matches some variety, it’s very welcome the fact that you can change the game default setup, shortening respawn time, adding infinite energy, decreasing boom boxes, exploding countdown, increasing player movement speed in general, and everything else. This can cause a much faster custom game with a more frenetic or slower rhythm. The choice is totally yours. To be honest, it was the best part of the game for me, since the default one became quite boring in 2 or 3 matches. 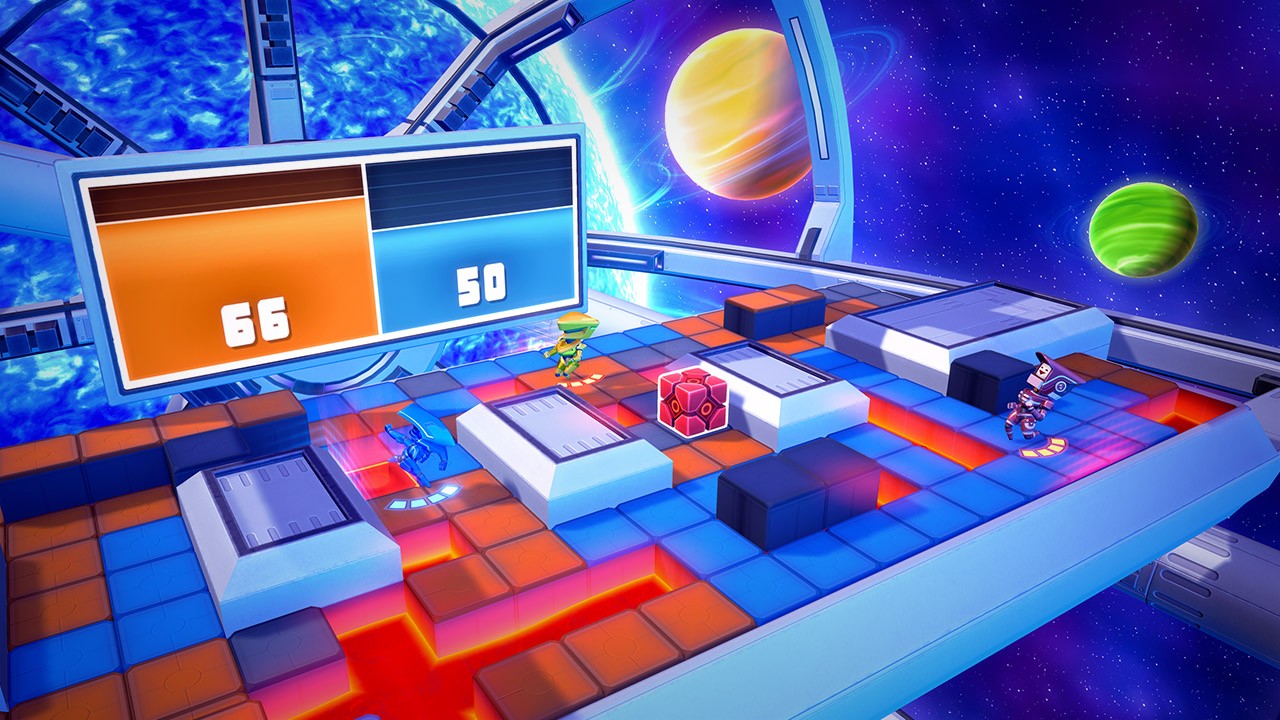 Finally, Battery Jam disappointingly ends up as an “okay” game. The graphics and character design are cool, and honestly better than I’ve expected for a Switch or an indie game. However, the characters don’t have personality traits or any background story. They were simply put there. I truly have the feeling that creators invested much more in the “look and feel” than spending time to add content in general.

It’s possible to get into the game with up to 4 players locally, choosing players Vs players or adding bots to the fun – in case you’re alone and don’t have friends. Unfortunately, there’s not much replay value at all, unlockables or either online mode, some valuable lacking features which could make Battery Jam longevity much improved, instead of it the game ends up being really tiresome after a few minutes of gameplay. The custom rules can help this out a little, but nothing that can extend up the fun for much longer. Even taking the price into consideration, the developers didn’t seem to worry about the overall content, delivering a product that seems limited and almost unfinished.

Battery Jam ends up offering a fun in short takes, but yet seems limited and almost unfinished.