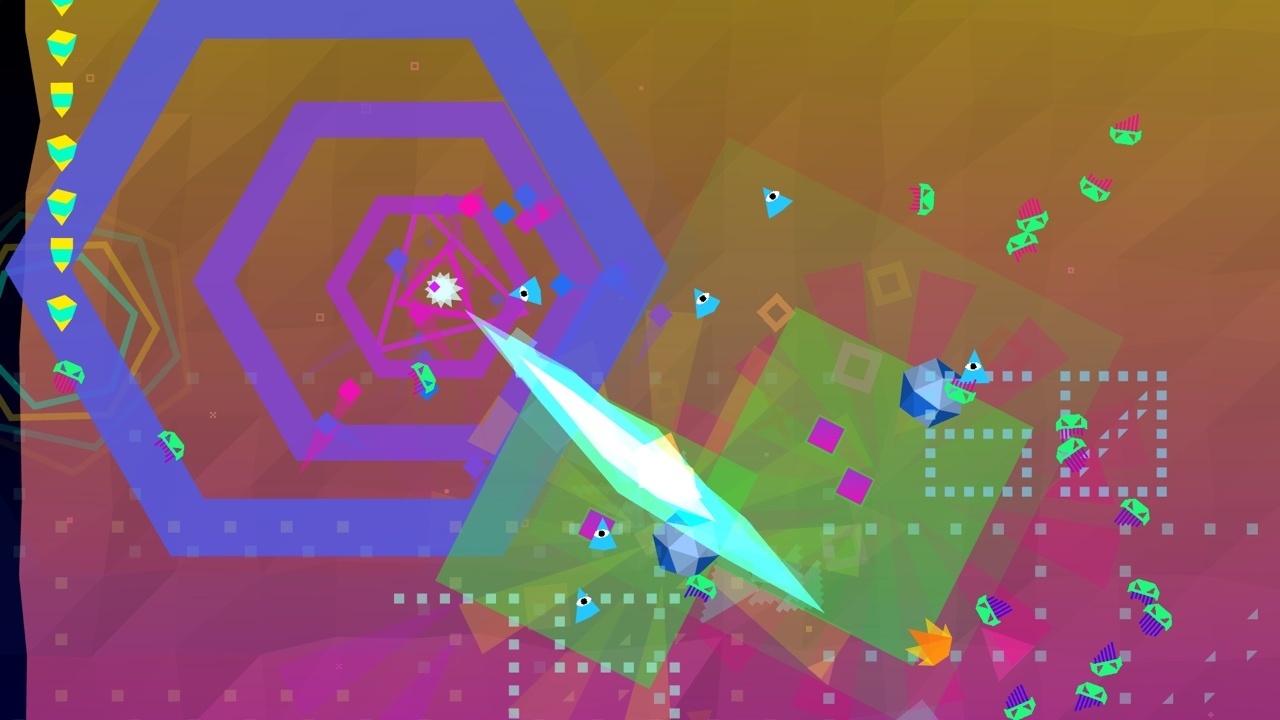 Vertex Pop has already brought several charming indie titles to the different consoles and even graced the Nintendo Switch with their Graceful Explosion Machine a fistful of years ago. There’s a certain level of recognizable aesthetic and interest that goes along with their games, one that embraces colours, shapes and chaos. While Graceful Explosion Machine may not have appealed to everyone, they seek to attract a larger audience with the latest Switch release, one that grabs at the base instinct of players the world over. The twin-stick shooter is always welcome on my Switch, even if it arrives with a rather foreboding name.

WE ARE DOOMED is a twin-stick arena shooter that should instantly be familiar to anyone who’s played Minigore, Geometry Wars, or any variation of the genre. The left directional stick guides you around the arena, the right stick controls where you fire, and you work the two in tandem to make sure that you live as long as possible. Monsters and aliens appear on each stage in ever-growing numbers, and you cannot advance to the next stage until you’ve shot everything dead. As you go along, prismatic cubes—called “tokens”—are dropped by either killing monsters or just arbitrarily appearing throughout the stage. Getting enough tokens unlocks the Superbeam, a destructive attack that’s longer-range than the standard gun and can cut through monsters that you normally cannot (such as the blue spheres that start appearing around the fifth wave). You’ve got three chances to get hit and then it’s game over. 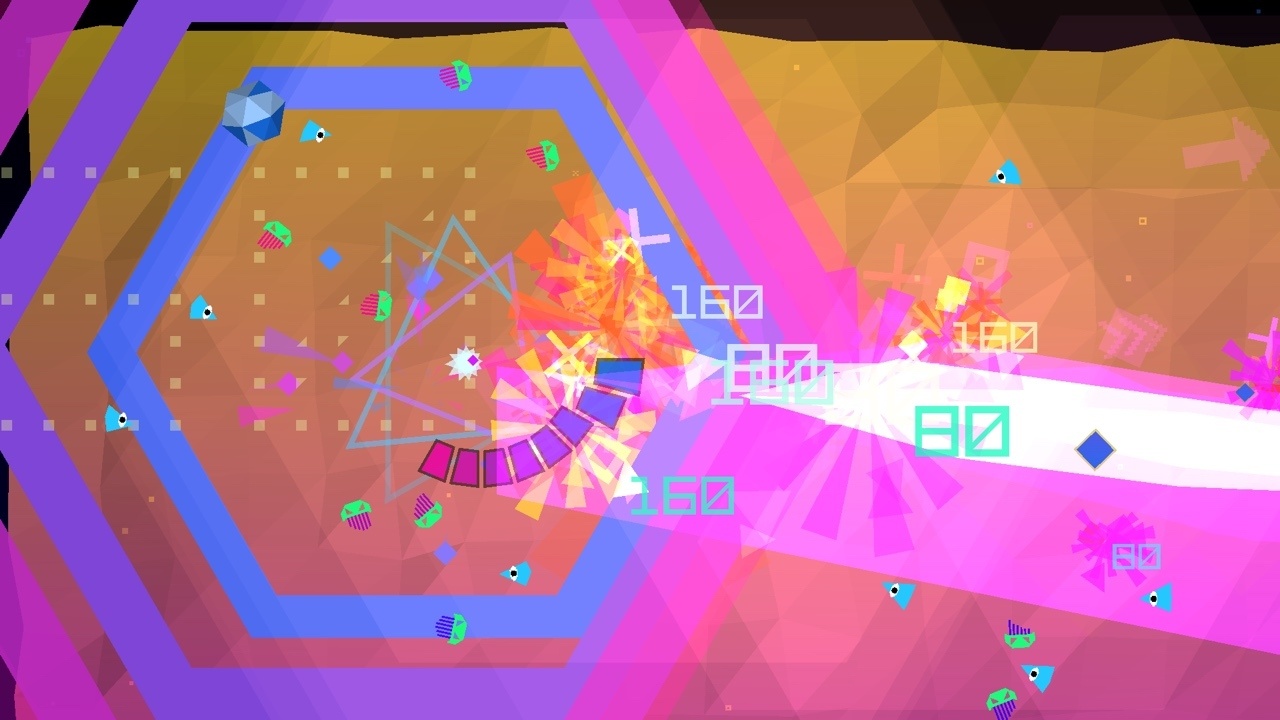 What makes WE ARE DOOMED special is not what it brings to the party, but how. Though the gameplay is tried and true, the presentation is pure sensory overload. The chosen colour palette makes everything pop in a big way, and the explosions of light keep players constantly engaged with the action on the screen. Often times I would lose track if the sudden burst meant that a monster had died or had just appeared, but I never felt that I was overwhelmed. In fact, the nonstop influx of shapes and noise makes for a great social experiment with friends or coworkers. Load up the game and quickly discover who amongst you is a detail-oriented backseat driver. It’s easy enough to pass the controller around between rounds and then see who screams out warnings every few seconds about an unforeseen enemy about to crawl up your backside and kill you. Nothing in the game looks particularly menacing, but you learn to dread the appearance of cones, spheres, and chevrons respectively.

The soundtrack is phenomenal. The composition of Robby Duguay is absolutely perfect to match the psychedelic madness unfolding on the screen and creates an excellent ambience for both the players engaged in the game and anyone who might watch (or even just in proximity). The music weaves in and out of the different stages, undulating and unfolding as you move between waves and stages. It’s less enjoyable in the endless mode, simply because it doesn’t change shape as noticeably, but that doesn’t make it bad in any way: just sort of different. In fact, I actually listened to the first track several times while writing this review.

WE ARE DOOMED is not without some shortcomings, however. The simplicity of the game may be a turn-off for some. In a gaming landscape that’s rife with weapon upgrades, reskinnable characters, and DLC, WE ARE DOOMED offers one gun, one supergun, and one ship. While there are plenty of players who might enjoy the retro approach and keeping things as minimalist as possible, it was rather distracting and detracting for me. There wasn’t anything to keep me going once I reached a certain level of waves, and I needed to keep the “arcade” aspect in mind if I wanted to forge ahead. Then again, that same sensation was curiously absent in the endless mode as it was, as we stated, endless. 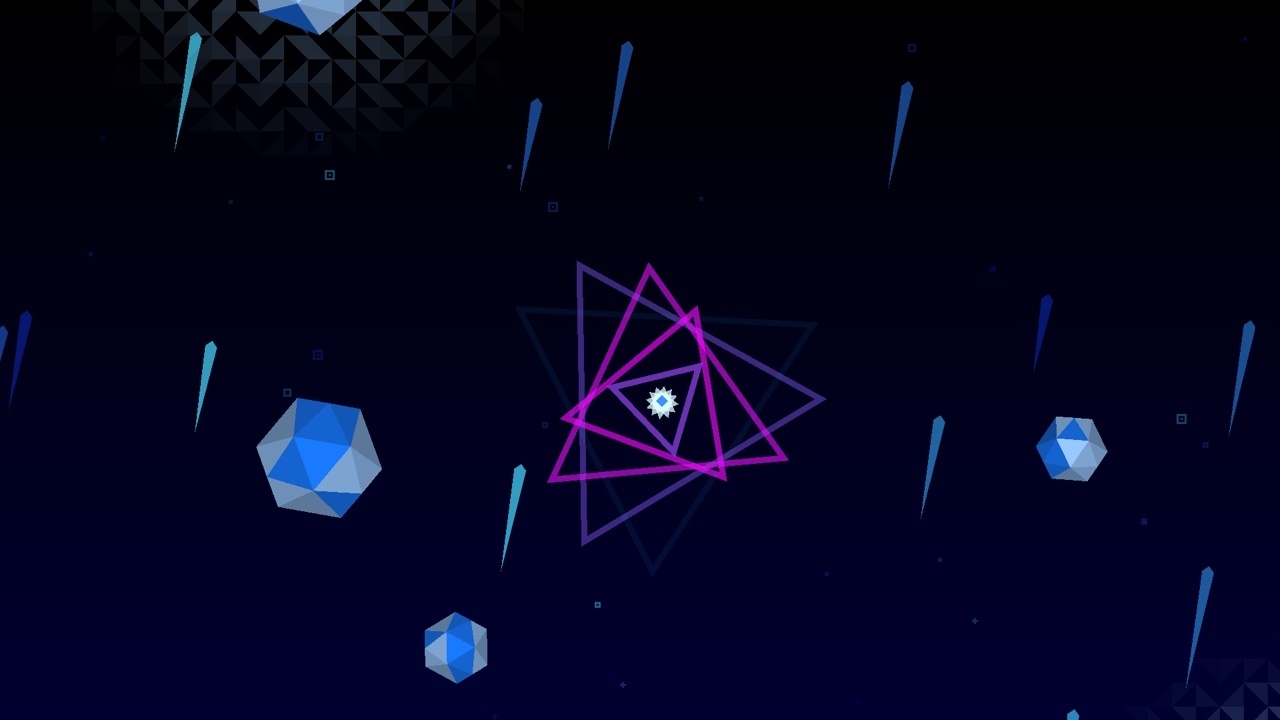 The gameplay is also pretty sparse. There are two modes: Waves and Endless. Waves caps out at 30 stages and Endless is, well, endless. Shoot until you run out of lives, let your high score ring supreme. The online Leaderboard is cool and all, and I don’t know if it allocates to cross console recognition or if it simply sits and waits by its lonesome in the Nintendo garden. If that’s the case, then players at least have some opportunity to reach for the brass rings and become the strongest survivor a la the Arcade Archives. However, if this culls high scores from across the different consoles, then the Nintendo Switch players don’t have a prayer. This game has been out for years on the PS4 with very little change in presentation or gameplay, and those high scores have been set rather atmospherically. Additionally, without any sort of multiplayer, story mode or even achievements to entice players (seriously Nintendo, what the hell), this is a one and done that is only kept afloat by the concept of the game itself.

I don’t like being fatalistic, but it seems that WE ARE DOOMED is a self titled prophecy. While a pleasure to look at and enjoyable for a few minutes, it’s the harder edge of “arcade” with very little payout from a huge time investment. At the end of it all, there is only death waiting after a lot of dodging, shooting and superbeaming to stay alive, and just a high score that matters really only to you. This isn’t a bad addition to the Switch, but there’s just something missing that keeps it from being more than a flash-in-the-pan experience. Sorry mates, but your replay value is, as you guessed, doomed.

WE ARE DOOMED Review

This isn’t a bad addition to the Switch, but there’s just something missing that keeps it from being more than a flash-in-the-pan experience.